The increasing deficiency of water resources in arid conditions of Kazakhstan forces to find the new directions of use of water-conservation technologies. One of perspective alternative technologies is use of waterabsorbing synthetic polymers. In article norms and ways of introduction of water absorbent «Aquasorb» during landing wood and shrubby fruit plants in droughty territories of the Republic of Kazakhstan are considered. The aim of method consists in definition of an optimum way of absorbent during landing wood cultures for more effective use of useful properties of this preparation. Field and laboratory researches on light brown loamy soils for this purpose are conducted. As the results of experiences use of the combined method, when on a bottom of a landing hole saturated water polymer is brought is recommended, and the volume of the tak- en-out soil is added the dry preparation saturated later with water before formation of gel particles. For the tree species landed with the soil it is recommended to do punctures in the created earth lump in which dry polymer at addition of saturated absorbent is fallen asleep for a bottom of a landing hole. This way simplifies entering of polymer into a soil substratum during landing wood cultures and allows distributing evenly in a radical zone of plants.

At constant deficiency of an atmospheric precipitation in the arid zones of Kazakhstan measures for providing plants and soils with moisture are necessary. For this purpose along with classical methods as forest plantations, watering drop and on furrows agronomists use hydro gels as an alternative to the existing water-conservation technologies. In recent years for these purposes beaded poly acryl amid hydro gels are tested.

Strongly bulking up polymeric hydro gels (PHG) represent a class of materials which are used in crop production for improvement of water physical properties of the soil. After watering they accumulate a large amount of water and gradually give it to plants. Polymeric hydro gels are porous, well bulking up, but not dissolved in water materials. Content of water in equilibrium bulked-up hydro gels changes in the wide range from 10 to 95 % and more. The main part of the liquid absorbed by hydro gel (up to 90 %) fills the free pore space occupying the main volume of a sample [1–4].

For experiences is chosen the preparation Aquasorb which has the high water occluding ability and can be used for improvement of providing plants with necessary amount of moisture. Its feature consists that under the influence of granule water quickly bulk up, holding at the same time in hundreds of times bigger, in relation to the weight, an amount of water and nutritious elements which are contained in its. Hydro gel by structure of the chemical bonds is capable to accumulate and hold moisture concerning 1:200 (1 kg of hydro gel can absorb until 200 liters of water). Positive property of the preparation Aquasorb is that it isn't dissolved in water; it isn't washed away from the soil and therefore keeps the properties [5] for a long time.

The majority of works on using of PHG as a strongly bulking up polymeric gels is executed in crop production for improvement of moisture providing plants [6–8].

The purpose of our researches with the preparation «Aquasorb» is to find the most convenient and optimum way of entering of hydro gel into the soil during landing and determining the maximum absorbing ability of polymeric hydro gel in laboratory and field experiments.

Our researches are conducted in three climatic zones: Almaty region, Enbekshikazakh district, settlement Aktogay, JSC «Forest Nursery», Almaty region, the Balkhash district, the settlement Bakanas; «Ili botanical garden» — branch of Institute of Botany and Phytointroduction; East Kazakhstany region, Kurchum district, village Saryolen. In these points experiments for cultivation of 10 species of decorative wood- shrubby and fruit breeds on the area of 1 hectare in everyone are put. Experience is conducted in five variants. So, the area of 0.6 hectares is engaged in an experiment with moisture-holding Aquasorb polymer, variants I, II, III with the recommended norms of introduction preparation: 1.0 kg/m3, 1.5 kg/m3 and 2.0 kg/m3. In variant IV is used the irrigating system of drop type of 0.20 hectares square. In variant V of 0.20 hectares square is used watering along the furrows according to the scheme of experiences. This variant serves as control.

For definition of the most convenient way of introduction of hydro gel at planting of trees and bushes reconnoitering experiment has been put in two ways. The first way was to addict hydro gel to the dry soil of 0.027 m3 which is provided for landing of bushes and in advance took out from a hole. In this hole is brought saturated preparation hydro gel 1:200. Its preparation is executed according to the recommendations of the producer, receiving saturated hydro gel (135 g on 27 liters of water). At the same time there was instantly a full wetting of the soil to formation of soil conglomerates (Fig. 1).

Soil mix has taken a form of liquid dirt which is hardly shaken from a shovel. The second method is used the careful hashing of the soil of the same volume and dry granules by weight in 135 g received from calculation at norm — 1.5 kg/m3 (in the second option) and at consumption of water when watering on one plant of 27 liters. It was received more homogeneous mass, without soil conglomerates. At the first and second ways identical increase in volume of soil mix up to 25–30 % was observed. The second way is most convenient for landing of trees and bushes.

The made experiment has allowed us to recommend a combined method of introduction of hydro gel: under trees on a bottom of a landing hole is sating inflated absorbent, these are 25 g of dry preparation in 5 liters of water which mixes up with the soil. Excess water flows down in the lower layers (Fig. 2).

Under Picea obovata in each variant on a bottom of a landing hole brought saturated Aquasorb — 25 g in 5 liters of water and in punctures from 8 to 12 pieces with a diameter of 1 cm, in a dry form in the first variant by 12.5-8.3 g depending on quantity of punctures, in the second variant by 20.3-13.6 g accordingly; in the third variant by 28.1-18.7 g respectively.

Considering that landing holes for bushes are provided the smaller sizes 0.3×0.3×0.3 m (volume of the taken-out soil of 0.027 m3), we recommend for a bottom of a landing hole to bring — 2.5 liters of saturated hydro gel. Its preparation required 12.5 g of dry preparation. Also from the recommended norms of introduction of hydro gel the first variant — 1 kg/m3, the second variant — 1.5 kg/m3 and the third variant — 2.0 kg/m3 has received amount of hydro gel on one plant; in the first variant it is brought — 90 g, in the second variant — 135 g, in the third variant — the 180 g. Hydro gel is brought locally in landing holes by a combined method. The amount of polymer is added to the soil according to calculations before filling of its saplings. Hashing of layers «gel — soil» is made carefully. 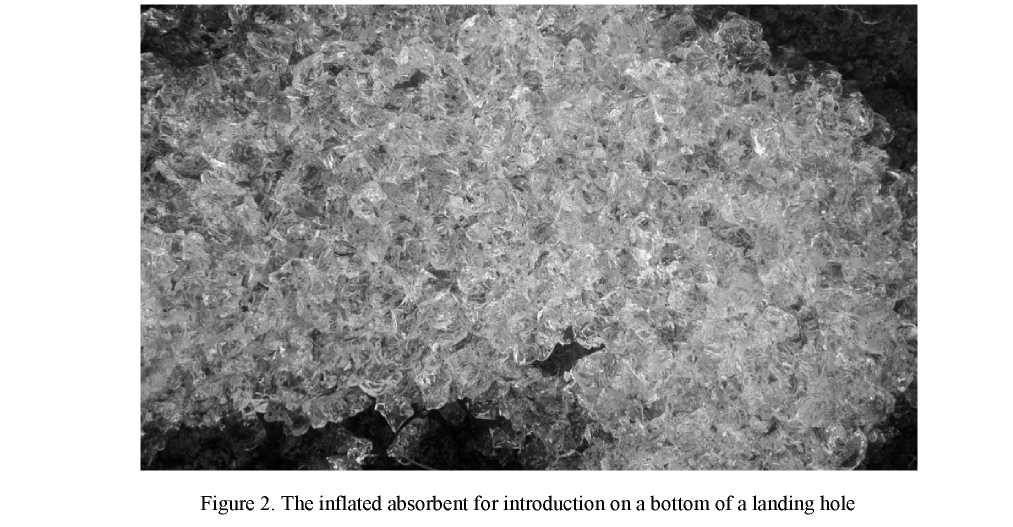 For specification of consumption rates of water during watering depending on the maximum keeping of water at preparation saturated moisture-holding polymer Aquasorb are conducted laboratory trials. In the cylinder with a capacity of 1000 ml is filled up 5 g of preparation and added gradually spring water by 50 ml — 12 times, generally 600 ml. Saturation continued within 3 hours, volume has increased to 1 liter. Then further changes in volume weren't observed. Therefore, the absorbing ability of hydro gel was 1:120 (according to technical requirements 1:200). From here it is possible to draw a conclusion on reduction of water during receiving the hydrated preparation for 35–40 % (Table 2). For comparison data on the recommendations of the producer are provided.

Table 2 Water consumption rate during landing wood-shrubby and fruit plants with water-absorbing ability according to technical requirements 1:200 and to calculations 1:120, depending on variants

The conducted experiments have shown that the humidity in the soil hydro gel system doesn't change (remains) during 8–10 days. Physical evaporation took place in both experiences equally.

Data of experiences show that introduction of hydro gel during landing plants by the offered combined method is most optimum as there is a uniform distribution of granules in a soil substratum that excludes a possibility of emergence of sites with the high or low content of hydro gel. Also the labor productivity increases.

The scientific work is conducted according to scientific and technical program № BR 05236444 «The testing of innovative technology for development of gardening in the arid regions of Kazakhstan».