The water resources of arid and steppe zones of the Republic of Kazakhstan are at high risk of extinction or degradation due to the number of climatic and anthropogenic factors. Rational use and restoration of most water bodies is an important task of the country. In this regard, knowledge and use of mechanisms of potential of water bodies in natural self-treatmentplay a significant role.

Most of the scientists believe that the support of balance between the photosynthetic activity of aquatic organisms and the processes of mineralization of organic substances formed in water reservoirs is the main mechanisms in the process of natural self-treatment of water bodies [1].

The indirect result of the photosynthetic activity of aquatic plants in water bodies can be the total oxygen content in water. At the same time, the destruction of organic substances can be assessed by the biological oxygen demand (BOD1, BOD5). The total amount of oxygen in the water is formed from dissolved atmospheric oxygen. It also can be formed as the product of photosynthesis by phytoplankton, phytobenthos, periphyton and macrophytes. The part of the oxygen is consumed on breath of hydrobionts and on participation in the chemical decomposition of inorganic and organic substances. Therefore, the total oxygen level in the water is always higher than BOD1, and in some cases BOD5. The ratio of these indicators can be taken as a criterion for assessment of the self-treatment capacity in the reservoir: if the intensity of photosynthesis in the reservoir is high, the water will be saturated with oxygen more actively, and the processes of destruction of impurities in the water will be faster [2].

The purpose of the present study was to conduct a comparative analysis of the self-treatment ability of the reservoirs in Akmola region based on oxygen indices and on the effect of individual hydrochemical components.

We formed the indicators of the amount of dissolved oxygen (R) and BOD5 in the studied lakes. Furthermore, we estimated the ratio of these indicators as characteristics of photosynthetic activity in the reservoir to its destructive ability: R/BOD5. If the ratio is high, the ability of self-treatment in water bodies will be high. But, when the ratio is low, the ability of the reservoir for self-treatment will also be low. 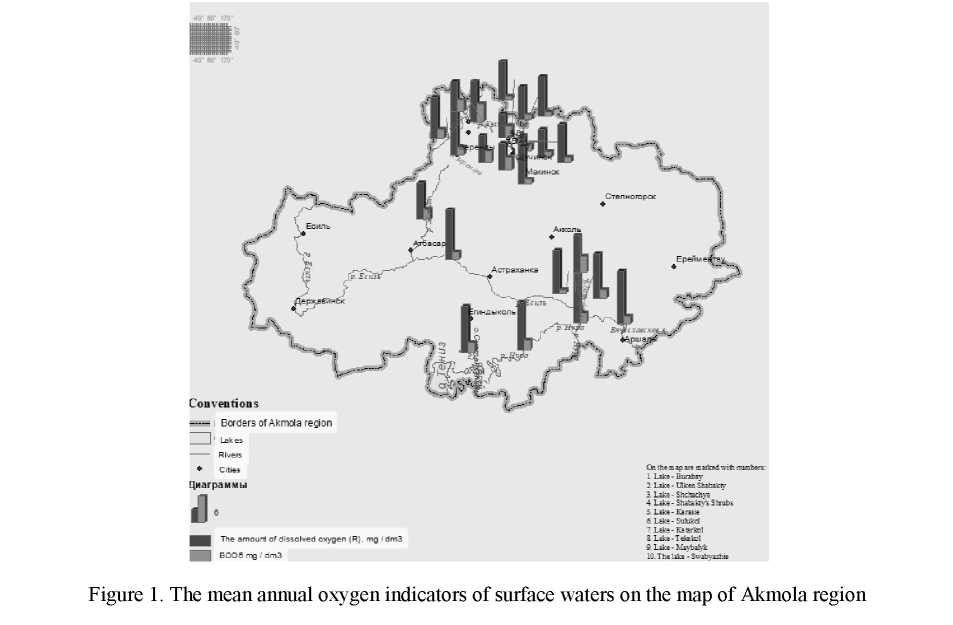 The variation number was made for the convenience of the approximation and it was divided into 6 classes (Table 2). The size of the variation class was 1.8.

Classes of water bodies based on self-treatment ability

Figure 2 shows the results of the study, where we can see that based on annual indicators, the lakes with low self-treatment capacity dominate among the other studied lakes: class I (R/BOD5 ratio is 2–3.8) takes 30.5 % of all reservoirs. This class of water bodies includes Sarybulak river, Zhabay river, Kypshakty river as well as Kopa lake, Sulukol lake, Katarkol lake, Maibalyk lake and Lebyazhie lake.

Table 3 provides information about the pollutants that effect on the photosynthetic activity of hydrophytes and depress the activity of saprobionts in the IV, V and VI classes of reservoirs with low selftreatment capacity.

As we know, threshold limit value (TLV) in natural waters can be accessed from the point of view of human toxicology. Nevertheless, the indicators toxic threshold of the same substances on biocenosis have still not been applied. Usually toxic threshold is determined for each species individually. Taking into account this fact, we conditionally applied the TLV for control the excess content of certain elements [4].

It can be noted from the data above, the reservoirs with low self-treatment capacity show high content of ammonium salt, fluorides, iron, zinc, manganese, copper in water.

The water bodies with high level of self-treatment capacity represent a comparative interest (V and VI classes). In comparison with I and II classes, they showed less excessive concentrations of selected elements: Ulken Shabakty lake showed the excess of fluoride (19.8 TVL) and manganese (210 TVL). There was the excess of zinc (140 TVL) and manganese (400 TVL) in the river Bettibulak.

It should be noted that the reservoirs of V and VI classes did not show contamination on ammonium salt, nitrogen nitrite, iron total and copper.

Bettibulak river from VI class with the highest self-treatment capacity demonstrated the excess of TVL only for zinc and manganese. The elements are not involved in the inhibition of the photosynthetic process and do not inhibit the activity of heterotrophic bacteria.

The observed lakes showed a low content of sulphate ions, chloride and magnesium and practically did not exceed the TVL.Therefore, their effect on the self-treatment capacity of these reservoirs was excluded.

Thus, among the many factors which can have effect on the self-treatment capacity of water bodies we can note the influence of high content of such chemical components as ammonium salt, nitrite nitrogen, iron and copper. However, the concentration sulfates, chlorides, magnesium, increased zinc and manganese in the water had no effect on the treatment capacity.