Indicators of the functional state of some body systems should be considered more informative than the incidence, when assessing the health status of the population. Thus, minimal changes in the quality indicators of buccal epithelial cells of the cheeks of children were noted at a pollution level approaching 3 MPCs, and at the same time they did not have significant changes in the incidence of allergic diseases and changes in immune reactivity [1-3]. Children, living in areas with unfavorable hygienic conditions, have lowered functional reserves of the body, and changes in their respiratory parameters prevail. Under the influence of adverse environmental factors (water, food, atmospheric air), subnormal changes in the body of children were recorded [4, 5].

Numerous studies and the results of cytomorphological indicators of the BECh of the child population [6-10] have shown prospects for scientific research in this area. The cytological state of the BECh reflects the state of the body, changing in dependence of the pollution of the production environment. Studies have shown that the epithelium of the mucous membranes of different degrees of differentiation, vary from different adverse effects and can be considered as a target for these effects [11, 12]. Non-invasive multi-organ micronucleus test on human exfoliating cells, including analysis of buccal epithelial cells, allows to verify the data, obtained from biological material, as well as to expand the amount of information about the existing adverse factors. In this case, the cheek mucosa is under the predominant influence of factors acting under inhalation effect [3, 13, 14].

Based on this, a research work of children of primary classes of secondary schools in Temirtau, Balkhash and Abay of Karaganda region was conducted. In total 240 children at the age of 6-8 years were examined. Methods of cytological analysis of BECh with the help of MS-200 microscope (Austria, 2004) were used, Kolmogorov-Smirnov criterion was used to evaluate normality of data distribution. Arithmetic mean, variance, error, and 95 % confidence interval were calculated for quantitative variables with normal distribution. Differences between the groups were revealed with the help of methods of parametric statistics. Comparison and assessment of relative risks was performed using the value of χ2. Non-parametric criteria based on the one-factorial dispersive analysis based on Wilcoxon rank labels, the median test, and Spearman's rank correlation coefficient were used for the calculation [15-17]. The results of the deviation were compared with the physiological limits of fluctuation. When calculating the BECh values, 200 cells were analyzed, 300 cells were counted if many different anomalies were recorded. During the analysis, 75-98 normal epithelial cells were taken as «normal». The number from 55 to 74 normal epithelial cells indicates an initial decrease in body resistance. A quantity from 15 to 54 and below indicates a decrease in body resistance. Incomplete phagocytosis (microbial digestion, cell residue) — reduced immunity, karyorrhexis indicates cell necrosis [9, 14].

Results and their discussion 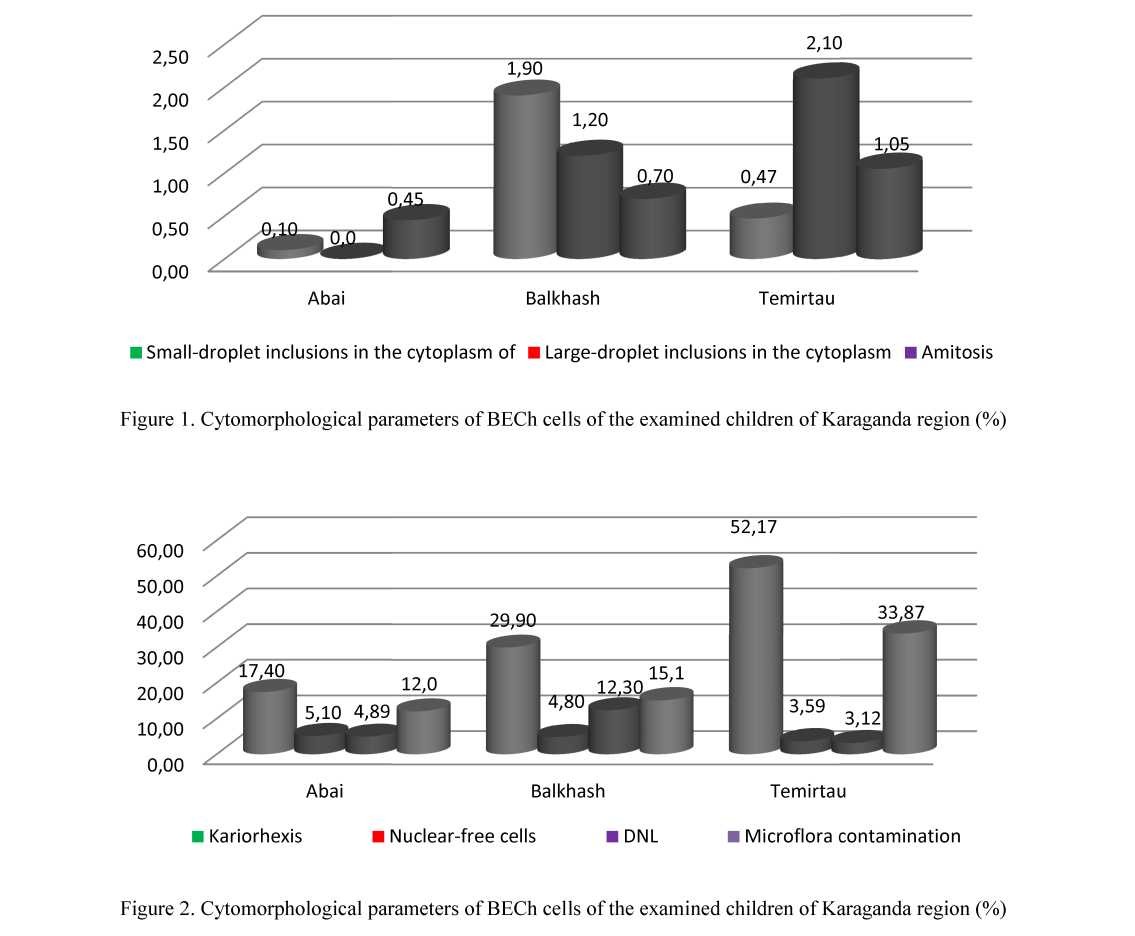 The functional status of buccal cells depends on the degree of their maturity, as in other epithelial cells. As part of the multilayer flat epithelium, buccal epithelial cells are at different stages of morphological and functional differentiation-from poorly differentiated precursors in the basal layer (they provide regeneration of the epithelium) to highly specialized cells, which while being differentiated are shifted to the surface layers, undergoing desquamation, some of them have signs of keratinization.

Differentiated, proliferative processes and functional parameters of mature cells are regulated by factors of local and central origin. It is not surprising that the state of buccal epithelial cells reflects the nature of destabilizing processes at the local and systemic levels [5, 12, 14, 18]. Changes in the differentiation of the epithelium, recorded morphologically (cell size, nature of nuclei and granules, signs of cytolysis) and electrokinetically (electrical mobility of nuclei), are proposed to be taken into account in screening assessment of health, stressful effects of harmful environmental factors, somatic pathology, biological age of a person.

The functional characteristics of epithelial cells also include such an important indicator as the ability for adhesive interactions with microorganisms. On this depends not only the nature of the microbial colonization of the epithelium and the state of local immunity, but also the homeostasis of the entire cellular community associated with the mucous membranes. Streptococci dominate in the obligate microflora of buccal cells. Their number is maximum in children under 10 years of age and is considered as one of the indicators of nonspecific resistance of the oral mucosa and «general health». The presence of less typical and atypical microorganisms for a given biotope reflects the weakening of colonization resistance, signaling destabilization processes, focused on the level of mucous membranes [18, 19].

A study of the buccal epithelium cells of the cheeks of the examined child population recorded a sixfold increase in the number of phagocytosed apoptotic (residual) bodies in all urban children. The number of cells with vacuolar dystrophy was above the norm in all examined urban children of Abay, Balkhash, Temirtau (Fig. 4).

The results showed that children living in the cities of Abay, Balkhash, Temirtau, despite the different place of residence, have catarrhal and atrophic rhinitis, because the buccal mucosa of the cheeks are the most

important biological barriers that prevent adverse and anthropogenic factors from entering the body. On the buccal epithelium of the cheeks the reparative process disorders were found, which affects their ability to interact adhesively with microorganisms constantly residing in the oral cavity, which leads to their accumulation. Inability to neutralize microorganisms indicates a disorder of local immunity [3, 6, 8]. Moreover, the buccal mucosa reflects the immune system of the entire digestive tract. Most of the nutrients enter the body through the gastrointestinal tract, the adequate functioning of which is ensured by normal microbiocenosis. [14, 18]. In the event of a change in microbiological associations, a negative change occurs in the processes of absorption, intestinal dysbiosis. Due to the toxic-dysmetabolic effects on the body, the formation of pathological processes is possible, which requires further in-depth study of the damaging effects of chemical factors. [12, 14, 19]. Malabsorption of essential trace elements occurs as a result of dismetabolic processes in the intestine, even with sufficient use of trace elements with food [12, 14]. Pediatricians note that prescribing iodine-containing drugs does not correct the iodine deficiency condition. This phenomenon is possible for any deficiency of trace elements (zinc, selenium). The revealed changes in the cytomorphological indices of the buccal epithelium make it possible to recommend non-invasive analyzes of the nasal epithelium, along with the buccal, to assess the effects of adverse environmental factors, especially to detect the inhalation effect of air pollutants.