The goal of modern medicine is early diagnosis socially significant diseases that reduce the ability to work and affect on mortality in the population. Oncological diseases occupy second rank among the causes of deaths in Kazakhstan. At the same time, lung cancer is leading, the death rate from which in the Republic is 17.6 % of the total mortality from cancer. The cause of high mortality is the lack of effective diagnosis of lung cancer in the early stages of the disease. At the moment, clinical medicine does not have specific and highly sensitive oncomarkers suitable for using in screening studies of the population. Free-circulating nucleic acids, including mitochondrial DNA and microRNA, are stable in physiological fluids of the body, such as blood, serum, saliva, urine, etc. Moreover, the results of numerous studies have shown that the level of free- circulating nucleic acids can indicate pathological processes in the human body. This shows great prospects for the use of free-circulating nucleic acids as biomarkers for non-invasive diagnosis of cancer. In this review, we are presenting available data on the modern methods of non-invasive cancer detection, so called «liquid biopsy» based on free circulating nucleic acids.

Currently, one of the problems of modern medicine is the growth of cancer rate in the developed countries, including Kazakhstan. Among malignant diseases the lung cancer occupies a leading position [1].

The lung cancer in the Republic of Kazakhstan makes up 11.4 % of the total number of malignant tumors. By morbidity and mortality, lung cancer ranks first place in Kazakhstan [2]. Exposure to radon, a naturally existing radioactive gas, is the second leading cause, according to the World Health Organization [3]. According to the experts the contribution of natural sources in the average annual radiation dose of the Kazakh population currently stands at 80 %, including 50 % from radon [4]. The genotoxic effects of radon on population of Kazakhstan are poorly understood, in spite of the fact that many regions of the country contain the high levels of radon. Therefore the search for blood-based tumor biomarkers for early detection of lung cancer is particularly acute in Kazakhstan.

Liquid biopsy is a revolutionary technique that is opening previously unexpected perspectives. It consists of the detection and isolation of free-circulating DNA, as a source of genomic information in patients with cancer.

In addition to the widely used methods of clinical diagnostics of cancer diseases, to date, a large amount of evidence has been accumulated about the involvement of microRNA in the carcinogenesis of various tumors, including lung cancer [5].

As a result of the transcription of microRNA' genes, pri-microRNA is formed, having a length of a thousand base pairs. The nucleotide sequence of these molecules includes inverted repeats, due to which a hairpin structure forms [6].

The microprocessor protein complex consisting of proteins are known as Drosha and Pasha. Pasha or its analog in mammalian cells DGCR8, recognizes the features of the pri-microRNA' structure. In the opinion of some authors, Pasha/DGCR8 recognizes the cleavage sites of pri-microRNA due to the presence in their structures an extended terminal loop [7]. According to other authors, site identification is associated with the transition point of the double-stranded RNA structure to flanking single-stranded areas [8] (Fig. 1). DROSHA cleaves the 3' and 5' strands of a stem-loop in pri-miRNAs. After the events described above, occurring in the nucleus, pre-microRNA is formed. Pre-microRNA has two free nucleotides at the 3'-end, which are necessary for subsequent interaction with the Exportin 5 is a RanGTP-dependent protein that mediates nuclear export of pre-miRNAs.

Moreover the free nucleotides at the 3'-end are necessary for the interaction of pre-microRNA with a protein called Dicer. This enzyme, which contains the catalytic domain of RNase III, cuts out of the pre- microRNA' loop that connects the 3'- and 5'-ends of the hairpin. As a result, short double-stranded RNA molecules are formed [9].

The last stage of biogenesis of microRNA is mediated by the conversion of double-stranded RNA to mature single-stranded RNA (Fig. 1), which is used to recognize their mRNA targets. This process takes place with the participation of the RISC complex (RNA Induced Silencing Complex), which includes one of the proteins of the Argonaute family (AGO1, AGO2). microRNA-RISC complex leads to degradation of mRNA or block translational initiation [10].

An estimated one third of the human genome is regulated by microRNAs. Differentially expressed mi- croRNAs have been identified in bronchopulmonary dysplasia, many of which regulate late lung development and alveolarization. Evidence is increasing that microRNAs are particularly important in lung homeostasis and development and have been demonstrated to be involved in many pulmonary diseases such as astma, COPD, lung cancer and other smoking related diseases. 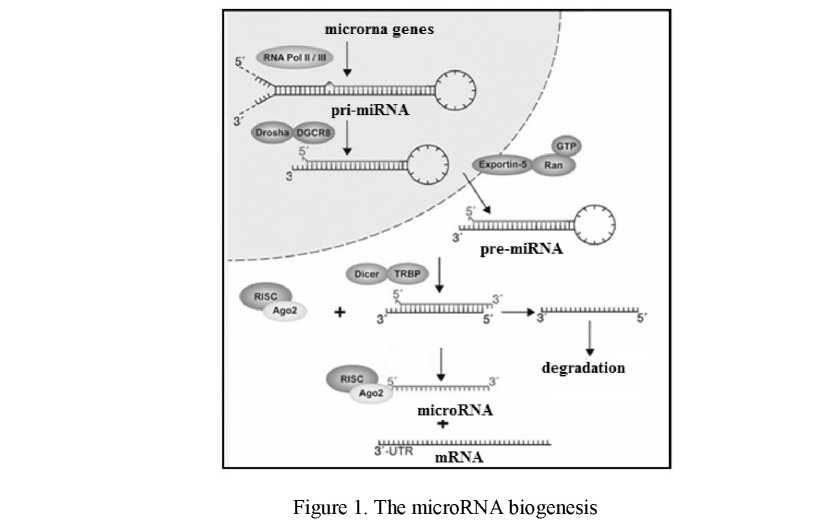 The interesting data were obtained about the effect of smoking as the main risk factor for the development of lung cancer and on the level of oncomiRs expression [5, 15]. In our studies the obtained results demonstrated, that in the smoking group of lung cancer patients the expression level of miR-19b-3p and miR-155 -5p was significantly lower than in the group of non-smokers lung cancer patients. It is possible that this effect is explained a general decrease in all freely circulating miRNAs due to the inactivation of DICER, which is the main enzyme of miRNA biogenesis, by tobacco smoke. Our results are consistent with previous data, indicating the negative effect of tobacco smoke on miRNA biogenesis [16, 17].

The results of recent studies show that the free circulating mitochondrial DNA (mtDNA) also can be used as one of the promising markers for pathological processes' detection. At the present time it has become apparent that mitochondrial dysfunctions determine the development of many diseases, including malignant tumors and autoimmune diseases [22, 23].

Mitochondrial dysfunction leads to production and accumulation of the reactive oxygen species (ROS) which effect on the processes in the cells [24]. The accumulation of ROS in cells leads to oxidative stress and can break the work of the mitochondrial enzyme systems. In normal physiology, mitochondria are very important in the cell as they produce most of the adenosine triphosphate (ATP) via oxidative phosphorylation system which is a necessary energy supply for cellular processes.

It is known that in the hypoxia conditions normal functions of the mitochondrial respiratory chain complexes is disturbed, which is accompanied by increasing of mitochondrial membrane permeability. This process is responsible for the exit of mitochondrial DNA into the cytosol.

It is shown that in cancer cells increasing an anaerobic glycolysis is observed. Also the number of mitochondrial DNA copies changes at various forms of cancer. The increased number of copies mtDNA was found in a prostate and ovaries cancer, endometrial cancer and some forms of leukemia. To the contrary, the reduced number of copies mtDNA was found in gastric and liver carcinoma, in a breast cancer and other forms of cancer [25].

Mitochondrial DNA is released in the circulation following general mechanisms of cell death: apoptosis and necrosis (Fig.3). Oncosis is a non-canonical form of programmed cell also can cause the presence of free-circulating mtDNA in the blood plasma of cancer patients (Fig. 3) [30].

Given that under certain conditions, neutrophils form mtDNA neutrophil extracellular traps (NETs), it is feasible that the circulating mtDNA observed may have been released through netosis (Fig. 3).

The recent data suggest that mtDNA can also induce the non-infectious systemic inflammatory response [30]. As we know that inflammation is a critical component of tumour progression. Therefore, it is quite possible that mtDNA can be not only a consequence, but also a cause of carcinogenesis.

Free-circulating mtDNA can be an indicator of carcinogenic effects [31]. Tan and colleagues show that cigarette smoke leads to increasing the frequency of mutations in the coding regions and in the D-loop region of mtDNA in buccal cells of smokers compared to the non-smokers [32]. Moreover, tobacco smoking causes an increase in the level of free-circulating mtDNA in the plasma of patients with malignant tumors of the head and neck [33].

Radiation therapy of cancer diseases also leads to increasing the level of free-circulating mtDNA in the plasma of patients and, consequently, this indicator can be used to monitor the effectiveness of treatment with ionizing radiation of cancer patients [36].

However, the influence of environmental factors on the level of free-circulating mtDNA at the moment is still not understood. Further research in this area can contribute to the development of preventive diagnostics aimed at identifying potential health risks associated with the impact of adverse environmental conditions or an incorrect lifestyle.

Several studies have shown that the level of the free-circulating mtDNA can be use as a biomarker of the cancer therapeutic resistance. For example, two independent studies have shown that a decrease in the level of free-circulating mtDNA associated with resistance to antitumor drugs such as anthracyclines and taxanes [37, 38]. Moreover Sanson et al., have shown that exogenous mtDNA can act as an oncogenic signal that promotes the activation of cancer stem cells after therapy. The horizontal transfer of mtDNA in the form of extracellular vesicles in contrast, provoked the development of resistance to hormonal therapy for breast cancer [39].

For many years, researchers have tried to create effective methods for cancer diagnosis, allowing detected malignant tumor at an early stage of development. Moreover, these diagnostic methods should be characterized by high specificity, sensitivity, absence of complications and to be sufficiently simple in technical terms. At the moment, molecular technology called «liquid biopsy» is becoming increasingly popular. A tissue biopsy is the «gold standard» of modern oncology. Despite the high accuracy, this method is very expensive, traumatic and unacceptable for mass screening studies of the population. «Liquid biopsy» is based on the use of physiological body fluids, such as blood, urine, saliva, etc., and has no risks for the patient compared to tissue biopsy. The markers in this case are free-circulating nucleic acids: microRNA and mitochondrial DNA.

Diagnostic methods based on the detection of free-circulating nucleic acids can be used not only in screening studies, but also serve as a reliable marker for the prognosis of the disease and the effectiveness of cancer therapy.

Thus, understanding the nature of these molecules, the mechanism of the biogenesis of free-circulating nucleic acids and their involvement in the processes of carcinogenesis is importance for personalized treatment of cancer diseases.