Extraction of betulin — natural triterpenoid from Kirgyz birch Betula kirghisorum, an endemic plant of the Republic of Kazakhstan

On the territory of the Republic of Kazakhstan there are 15 species of birch trees, including 4 endemic species. This plant is a low tree with a reddish bark and a loose crown. On the territory of the Kent forestry of the Karkaraly State National Natural Park, a Kyrgyz birch bark was collected. Birch bark was crushed and dried to constant weight. From birch bark of the Kyrgyz with extraction method followed by recrystallization from isopropyl alcohol was isolated betulin. The melting point of the isolated substance was 243 t,C. Betulin was identified by thin layer chromatography and compared with a standard sample. The substance was analyzed by infrared spectroscopy methods in KBr tablets and high performance liquid chromatography (HPLC). In the Fourier spectrometer FSM-1201, the characteristic frequencies of the absorption bands were used to determine the presence of various groups of atoms and bonds characteristic of betulin in the molecule. HPLC was used to study a sample using a Shimadzu LC-20 Prominence liquid chromatograph. Selected conditions for the qualitative and quantitative determination of betulin.

Birch is a genus of deciduous monoecious trees and shrubs of the birch family. Usually 120–140 species are distinguished in the temperate and cold zones of the Northern Hemisphere and in the mountains of the subtropics. In Kazakhstan, there are 15 species of birch trees, including 4 endemic ones: thick birch, Talas birch, Kyrgyz birch, Yarmolenko birch [1]. The last three species are listed in the Red Book of the Republic of Kazakhstan.

Kyrgyz birch grows in a relatively small territory of Kazakhstan. According to literary data, it is found on the territory of the Naurzum State Natural Reserve and Karkaraly State National Natural Park [2, 3]. Kyrgyz birch is a low tree with dirty white bark and loose crown. The branches are straight or sideways upright, not drooping; young branches are gray-red-brown or red-brown. The leaves are ovate or ovoid-oval, 2.7–6.5 cm long, 1.3–4.4 cm wide, widest in the middle or slightly below it, with a wedge-shaped base, pointed at the end, evenly doubly serrated, with protruding below it is thick, with brown veins, on pubescent petioles 0.7–1.7 cm long. Fetal catkins 1.2–2.3 cm long, 0.4–0.8 cm in diameter. The bracts are hard and pubescent. The nuts are obovate, the wings are already nut or, more rarely, equal to it.

Betulinis a triterpen alcohol of a lupene. Chemical formula C36H60O3 is one of the main components derived from birch bark [4]. Recently there has been a steadily increasing interest in betulin and its derivatives due to the wide spectrum of biological activity of these compounds [5, 6]. It has been confirmed that betulin and a number of its derivatives possess antioxidant, anti-inflammatory, antitumor, antiviral, antiseptic and hepatoprotective properties [7, 8]; also betulin derivatives exhibit anti-HIV activity [9]. Various pharmaceutical companies produce preparations based on betulin in the form of extracts, pills, syrups and capsules for the prevention and treatment of various diseases.

In this regard, the purpose of this work is to isolate betulin from birch bark of an endemic plant of Kazakhstan, Kyrgyz birch for the subsequent synthesis of its new biologically active derivatives.

On the territory of the Karkaraly State National Natural Park, in Kent forest, near the village of Kent in November 2018, Kyrgyz birch raw materials were collected (Fig. 1).

From birch of Kyrgyz with extraction method, followed by recrystallization from isopropyl alcohol was isolated betulin. The external part of birch bark (bark) Betula kirghisorum was used as raw material. Birch bark was crushed to a particle size of 5-8 mm, dried at 100 °C to a constant weight.

The extraction was conducted according to the well-known method [10]. In a round bottom flask with a volume of 2 liters, equipped with a stirrer and reflux condenser, 400 grams of raw material was loaded. 300 ml of 20 % sodium hydroxide solution and 750 ml of isopropyl alcohol were poured into the flask. Then the reaction mixture was boiled in a water bath for 5 hours with vigorous stirring. After boiling, the reaction mass was quickly filtered from the remnants of unhydrolyzed bark on a Buchner funnel. The filtrate was cooled and transferred to a paper filter. The precipitate that did not pass through filter paper was dried. Got a yellow powder.

The product was recrystallized in isopropyl alcohol. The resulting yellow powder was placed in a heatresistant beaker, isopropyl alcohol was poured in and boiled for 10 minutes until the precipitate completely dissolved. The hot solution was transferred to a paper filter. The resulting filtrate was cooled and left to crystallize for 12 hours. The flocculated precipitate was filtered, dried to constant weight. The product was recrystallized to obtain a white amorphous substance several times.

The resulting substance was identified using thin-layer chromatography (TLC) on Silufol plates using eluting systems: benzene-methylene chloride-ethyl alcohol = 5:5:1. Spot detection was carried out with a 10 % solution of phosphomolybdic acid, followed by heating the plate for 3–4 minutes. The substance was compared with a sample of betulin provided by employees of the laboratory of organic synthesis of Tomsk State University.

The chromatogram showed that the sample and the test substance are identical. Next, the substance obtained by us was analyzed using infrared spectroscopy (IR spectroscopy) and high performance liquid chromatography (HPLC).

IR spectra were recorded on a Fourier spectrometer of the FSM-1201 brand, in the wavelength range of 500–4000 от–ɪ in potassium bromide tablets (Fig. 2). 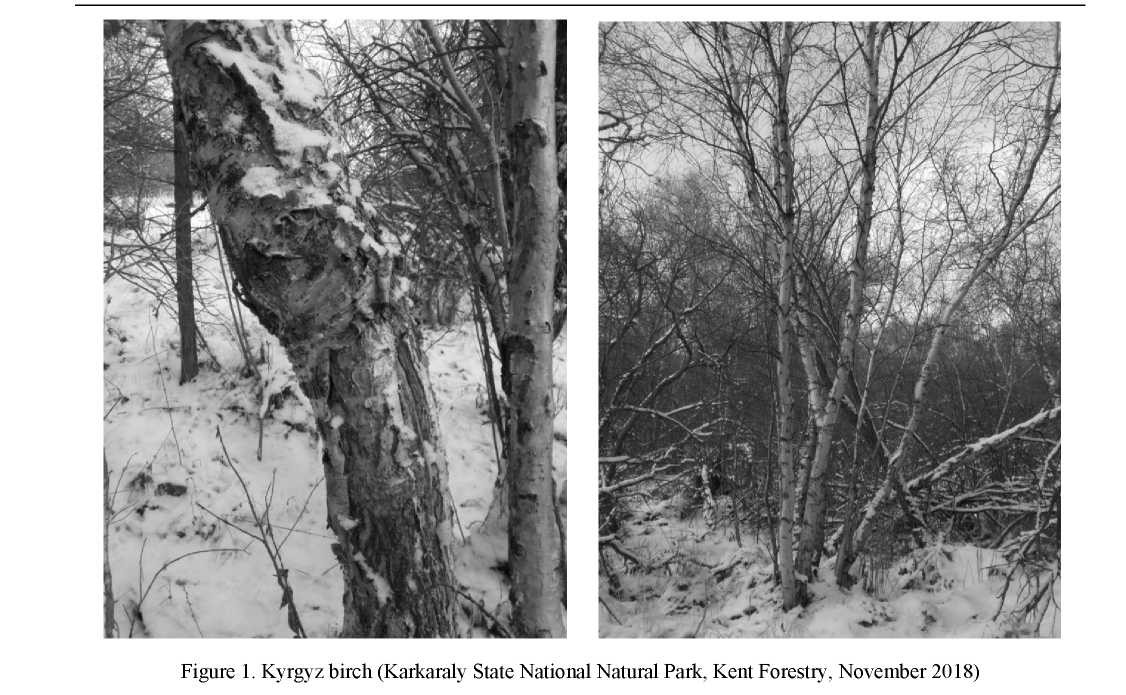 HPLC analysis of the sample (Fig. 4) was performed using a Shimadzu LC-20 Prominence liquid chromatograph, Zorbax column with a size of 150×4.6 mm, and a spectrophotometric detector SPD 20 AV. The mobile phase was a mixture of solvents: acetonitrile - water (3:1). Elution was performed isocratic. The column temperature is 40 oC. The volumetric flow rate is 0.8 ml/min. The analysis time is 25 minutes. The temperature of the detector cell is 40 oC.

Selected conditions ensure the suitability of the HPLC procedure for the qualitative and quantitative determination of betulin. As can be seen in Figure 4, the retention time for a substance is 5.1 minutes. According to the chromatogram, the purity of the selected substance is 100 %. The melting point determined on a Stuart SMP 10 instrument was 243 0C.

The work is devoted to the selection of the pentacyclic triterpenoid betulin from birch bark of the Kyrgyz. Kyrgyz birch (Betula kirghisorum) is an endemic plant listed in the Red Book of Kazakhstan. The collection of raw materials was collected out on the territory of the Kent forestry of the Karkaraly state national natural park. Betulin was isolated by extraction from isopropyl alcohol, hydrolyzed in an aqueous solution of alkali. The substance was recrystallized several times to obtain pure betulin using isopropyl alcohol. Betulin was identified by TLC on Silufol plates and analyzed using IR spectroscopy, HPLC. As a standard, a sample provided by scientists from Tomsk State University of the Russian Federation was used. Using the characteristic absorption frequencies in the IR spectra, the presence in the compound of various groups of atoms and bonds characteristic of the betulin molecule was determined. The qualitative and quantitative analysis of betulin was carried out by HPLC. This substance was isolated for the first time from Kyrgyz birch.