The sensitivity of algae to the exposure of telmisartan

Nowadays, everyday people apply various pharmaceuticals. However, after their consumption drugs excrete to wastewater treatment plant, where they cannot be eliminated totally. As the result they released to surface waters. Many scientists concerned about the effect of medical substances on aquatic biota. The issue of pharmaceutical contamination is not well studied in Kazakhstan in comparison with EU countries. Therefore, it is significant to do ecotoxicological research on pharmaceutical ingredients. The aim of our study was to assess the effect of telmisartan on the growth of Chlorella species. Telmisartan was selected as currently it is one of the priority pharmaceuticals based on risks to aquatic biota in Kazakhstan. We estimated exposure of substance in 5–15 mg/L concentrations. According to the results, high concentration of our medical substance had significant impact to the growth algae, it led to 83.93±0.13 % of growth inhibition. The half maximal inhibitory concentration of telmisartan on algae was 6.16 mg/L. Furthermore, we calculated the growth rate of Chlorella species. We found that growth rate decreased in six times on algae in concentration 15 mg/L in comparison with controls. The following results showed that Chlorella species are vulnerable to the exposure of pharmaceuticals.

Currently, one of the main environmental issue is pharmaceutical pollution of the biota, as their various concentrations were detected across the world. There was International Conference on Chemicals Management in 2015, where pharmaceutical industries and non-governmental agencies admitted that now it is important to focus on protection our environment from «pharmaceutical pollution» [1, 2]. Pharmaceutical ingredients are ubiquitous. There are about 2300 human drugs were determined as potentially relevant for the biota in Germany, because they have ability for bioaccumulation, can be toxic and persistent in the environment [3].

In the last few decades, there has been recorded the occurrence on aquatic environment of more than 100 various pharmaceutical ingredients with concentration from ng/L to pg/L. The detected levels are low, but drugs still can have adverse effect, as they are designed to have specific biological effect in low concentration. In addition, the entrance of medicines to the biota is continuous. As a result, living organisms on the environment have exposure from drugs during the life [4].

Every year people use tons of medicines and after consumption of drugs, they may release to the environment in various ways. Every pharmaceutical has their own features, as a result not all of them degradable in wastewater treatment plants (WWTPs). Therefore, WWTP is considered one of the main sources of drugs release to the environment. Residues of pharmaceuticals from WWTPs enter to the surface waters and effect aquatic organisms. Another source of medical substances in the environment is when pharmaceutical industries, hospitals and people directly dispose them to the aquatic biota. Due to all these sources, there are significant concentration of drugs can be met in many water bodies [5, 6].

Although the ecotoxicological effect of pharmaceutical ingredients on aquatic biota is well studied in European countries and US, there is still a gap of knowledge on its risk in Kazakhstan, just few studies have been published, being mainly focused on antibiotics. For instance, recently there has been conducted the study of priority antibiotics effect on Lemna minor. According to the results sulfamethoxazole demonstrated a high toxicity on macrophyte with half maximal effect concentration (EC50) value of 3.67 mg/L. Furthermore, the mixture of five antibiotics as amoxicillin, clarithromycin, azithromycin, sulfamethoxazole and oxytetracycline showed a significant exposure on the growth of Lemna minor with EC50 0.13 mg/L [7, 8]. According to Boxall et al. research pharmaceuticals have toxic effect to earthworms. Acetaminophen led to the mortality of Eisenia fetida earthworms in concentration 100 mg/kg [9].

Currently, our country has limited studies on pharmaceutical ingredients as pollutants. Therefore, the aim of the following paper was to assess the exposure of one of the priority pharmaceuticals in Kazakhstan, which is telmisartan on aquatic organism. As representative of aquatic biota, we selected algae Chlorella species.

The study was conducted based on the OECD 201: Freshwater Alga and Cyanobacteria Inhibition Test method [10]. The experiment was accomplished in «Applied Ecology» Laboratory of L.N. Gumilyov Eurasian National University. The test lasted 72 hours. The subject of the research was Chlorella species, which was supplied from «Applied Ecology» Laboratory of L.N. Gumilyov Eurasian National University. As the object of the study we used telmisartan. The present substance was supplied from Boehringer Ingelheim, Germany. Telmisartan was selected as currently it is one of the priority pharmaceuticals based on risks to aquatic biota in Kazakhstan, which means it can have adverse effect to the growth of algae in our country [11]. As telmisartan is practically insoluble in water, we used chloroform as a solvent [12]. The stock solution was prepared in concentration 1000 mg/L. In order to assess the effect of telmisartan on algae, we used three concentrations: 5 mg/L, 10 mg/L and 15 mg/L. Each concentration including controls had two replicates. The Chlorella species was cultivated in 50 mL of Tamiya growth medium in 100 mL of Erlenmeyer flasks. Tamiya growth medium was used as favorable environment for Chlorella species. Tested samples were put in culture chamber in random order. Table 1 provides information about concentrations of solution in order to prepare 1 L of Tamiya medium [13].

Table 1 The outline of concentrations in Tamiya growth medium [13]

Algae has a significant role in biota, because they are primary production for many marine species. Therefore, any effect of pharmaceuticals to algae will be reflected on higher trophic levels. As algae are vulnerable to any changes, they are good indicators of adverse effect from chemicals [14]. 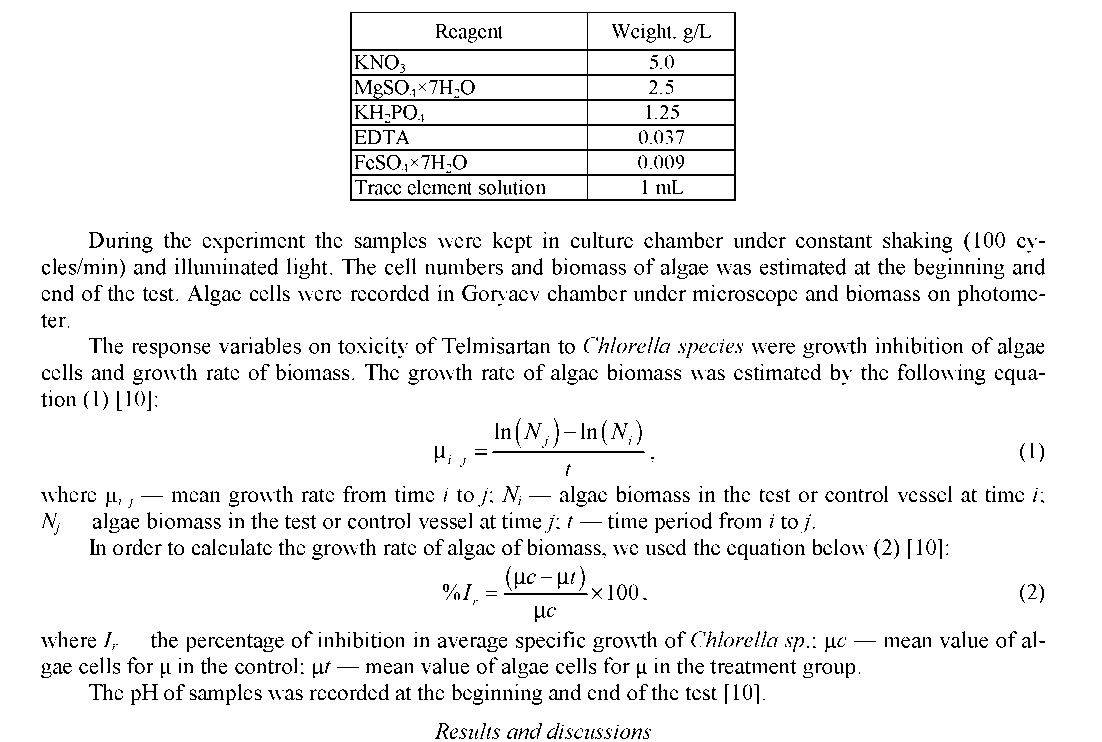 pH values of samples in various concentration during the experiment

Figure 2 illustrates the multiplicity growth of Chlorella sp. cells during the experiment. The cell number in control samples increased to 1.3 times in 7 days, while the high concentration of telmisartan increased al- 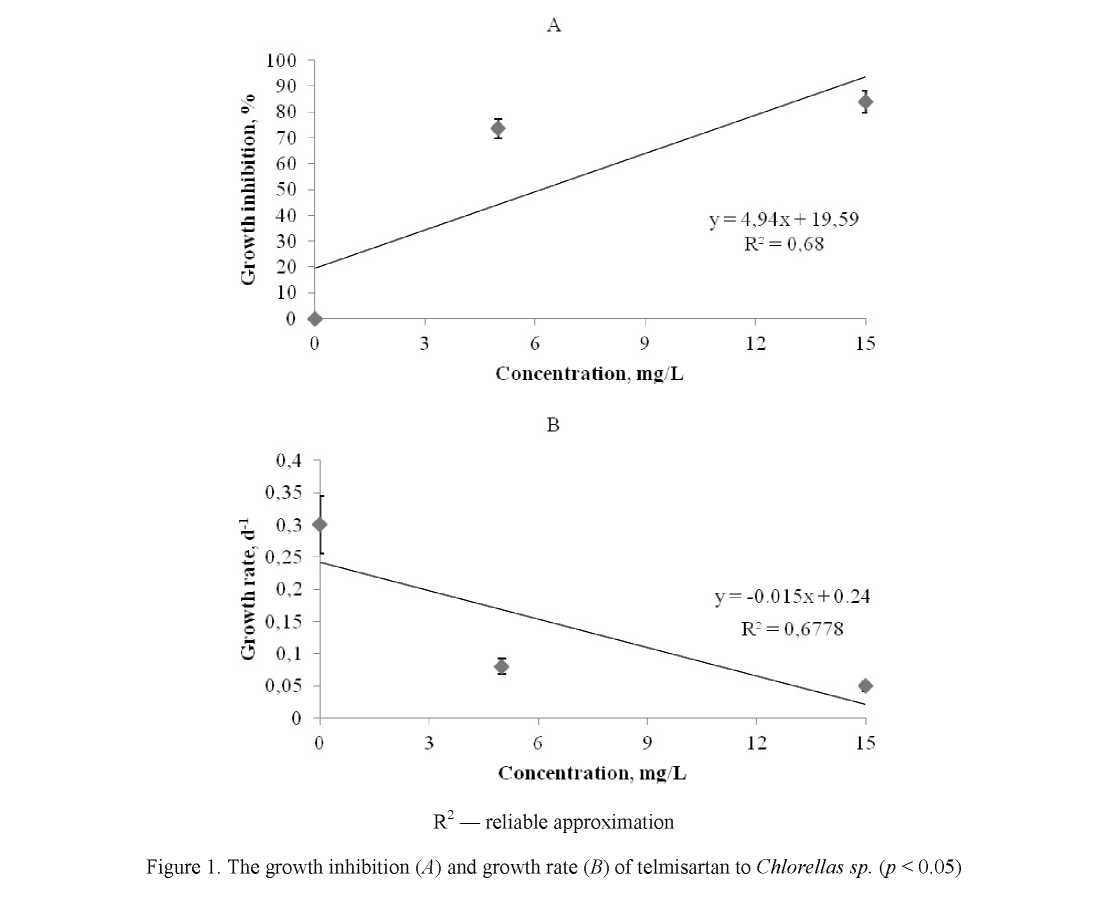 gae number only in 0.8 times. In comparison with 15 mg/L concentration of samples the growth of controls was in 1.6 times higher.

In recent study of Dimzon et al. (2018), telmisartan was detected in Sampaloc lake in Philippines. It was found it populated residential areas in concentration 76 ng/L [15]. Furthermore, there were analysis on pharmaceuticals occurrence on 90 European WWTPs. Telmisartan was identified with frequency 63 % in concentration 368 ng/L [16].

Previous study on effect of antibiotics to Chlorella vulgaris showed a valuable impact on population density of species. The EC50 value was <100 mg/L. In this study, the most toxic substances were concluded 2,4-dichlorophenol and ciprofloxacin (10.75 and 29.09 mg/L respectively) [17]. Furthermore, there was conducted study on toxicity of antibiotics to Chlorella species. According to the results, Chlorella species are sensitive to the exposure of macrolides as azithromycin and clarithromycin. The EC50 values of azithromycin and clarithromycin were 0.33 and 0.59 mg/L respectively [18].

Nowadays, scientists do not pay attention pharmaceuticals pollution of aquatic biota in Kazakhstan, as there is deficit data on ecotoxicology of drugs. Therefore, we believe it is important to conduct studies on effect of pharmaceutical substances to living species, as this is a big threat to the disappearance of living organisms on the environment.