The methods of ecological assessment of soil condition in the territory of solid household waste landfills in the North Kazakhstan region are considered in the article. The priority method for studying soil quality in the North Kazakhstan region is the bioindication method. This method shows the state of the soil cover on the landfill site. Based on the results of soil biotesting, different levels of pollution are obtained in the territory of the North Kazakhstan region. This is due to the fact that unauthorized landfills have different years of formation and the garbage stored in landfills has a different composition. In the majority of settlements on landfills there are remains of animals, organic garbage, liquid wastes. During the experiment, the method of biological monitoring was used in the territory of solid domestic waste landfills in the North Kazakhstan region. Average soil contamination: Novoishimskoye of the district named after G. Musrepov; Ekaterinovka of Zhambyl district. There is no pollution: Lomonosovka of the district named after G. Musrepov; Chagli of Akkayin district; Svyatodukhovka of Zhambyl district; Rassvet of Kyzylzhar district; Bezlesnoye of Akkayin district; Novokamenka of Kyzylzhar district. Despite the long-term accumulation of solid domestic waste on individual soil samples, seeds of cress-lettuce sprouted even with sprouts with small deviations and slight deformations.

Anthropogenic changes in the biota of terrestrial ecosystems are determined not only by direct human impact, but also mainly by anthropogenic changes in environmental parameters: atmospheric air, soil, surface and groundwater. For the bioindication of terrestrial ecosystems, indicators of the state of higher plants, lichens, mosses, soil algae, bacteria, etc. are most often used. The correct choice of bioindicators plays an important role.

Bioindicators are biological objects (from cells and biological macromolecules to ecosystems and the biosphere) used to assess the state of the environment. When they want to emphasize that bioindicators may belong to different levels of the organization of a living person, they use the term «bio-indicator systems».

Cress-salad is a bioindicator plant. Cress-lettuce is an annual vegetable plant, which has an increased sensitivity to soil pollution by heavy metals, as well as to air pollution by gaseous emissions from motor vehicles. This bioindicator is distinguished by rapid germination of seeds and almost one hundred percent germination, which decreases markedly in the presence of pollutants.

In addition, the shoots and roots of this plant under the action of pollutants undergo noticeable morphological changes (growth retardation and curvature of the shoots, reduction of the length and weight of the roots, as well as the number and weight of seeds).

Cress-salad as a bioindicator is also convenient in that the effect of stressors can be studied simultaneously on a large number of plants with a small area of the workplace. Very short periods of the experiment are also attractive. Cress-lettuce seeds germinate on the third or fourth day, and most of the experimental questions can be answered within 10-15 days.

When conducting experiments with watercress, it should be borne in mind that the water-air regime and the fertility of the substrate have a great influence on the germination of seeds and the quality of the seedlings. In humified, well-aerated soil (black soil, upper horizon of gray forest soil), germination and quality of seedlings is always better than in heavy clay soil, which, due to low permeability to water and air, has a poor water-air regime. Therefore, as a substrate for control, one should take the soil of the same type as for the experiments.

Thus, the experiment with seedlings of watercress is one of the fastest, and the plant itself allows you to clearly judge the quality of the environment [1].

On the territory of North Kazakhstan region there is one landfill for solid waste disposal.

Representatives of the departments of natural resources and environmental management, energy and housing and communal services, the department of ecology in the North Kazakhstan region, with the participation of representatives of the district housing and communal services departments, optimize landfills in the North Kazakhstan region, conduct regular visits and inspection landfills in areas of the region.

Soils were selected in the summer period of 2016, 2018 from the surface horizon of 0-20 cm by an envelope method with a side of 1 m square. The selection and preparation of soils were carried out according to the requirements of State standart and soil analysis techniques for the components to be determined [3].

Signs that were used for soil biotesting: seed germination.

For each selected soil sample, 3 samples were prepared at one landfill. As a result, mean values were selected. Depending on the results of the experiment, the substrates are assigned one of four levels of pollution:

Before setting up an experiment on bioindication of pollution using watercress, a batch of seeds intended for experiments is checked for germination.

Germination is carried out at a temperature of 20-25 degrees. Germination of 90 to 95 % of seeds within 3 to 4 days is considered the norm. The percentage of germinated seeds of the number of sifted is called germination. Watering was performed with settled tap water.

After determining the germination of seeds, the experiment is started in the following sequence:

Statistical processing of monitoring results. Biotesting indicators expressed as arithmetic mean values of the growth of test plants from the n-th number of definitions. The significance of the discrepancy between the mean values was assessed using Student's t-test for a confidence level of P = 95 %. This criterion was developed by William Gossett for assessing the quality of beer at Guinness. In connection with the obligations to the company on non-disclosure of commercial secrets, the Gosset article was published in 1908 in the journal «Biometrics» under the pseudonym «Student». Student's t-test is used to determine the statistical significance of differences in averages. It can be used both in cases of comparing independent samples (for example, a group of patients with diabetes mellitus and a group of healthy ones), and when comparing related sets (for example, the average pulse rate in the same patients before and after taking an antiarrhythmic drug). In the case of watercress, seedlings grown on soil samples were selected on the territory of landfills with seedlings that were grown in ecologically clean soil.

Soil sampling for the study was conducted in July 2016 at 7 points in the North Kazakhstan region:

According to the results of the experiment, it was determined that the highest percentage of germination of cress-lettuce seeds is noted at the sampling points: Svyatoduhovka, Zhambyl district (96 %); Bezlesnoye, Akkayin district (92 %).

The smallest percentage of germination of cress-lettuce seeds is noted in the points: Novoishimskoye district named after G. Musrepov (56 %). The average indicator has the following locations: Kiyaly of Akkayin district; Petrovka of Zhambyl district.

During the study, the percentage germination of cress-lettuce seeds was calculated. Based on these data, the level of soil pollution was calculated. It has been determined that:

The main natural resources of the region are the soils represented in arable land by 70 % black soil. The territory, despite the general flatness, is characterized by heterogeneity of soil formation conditions. The presence of highly developed meso and microrelief, the heterogeneity of the chemistry and lithology of the parent and underlying rocks cause differences in soil moisture and salt regime even in relatively small areas. Separate soil-forming processes are geographically severely narrowed, and often combined with each other. All this causes the extreme diversity and complexity of the soil cover.

Soil sampling for the study was conducted in June-August 2018 at 7 points in the North Kazakhstan region:

According to the results of the experiment, it was determined that the highest percentage of germination of cress-lettuce seeds is noted at the sampling points: Svyatoduhovka, Zhambyl district (94 %); Bezlesnoye, Akkayin district (92 %).

The smallest percentage of germination of cress-lettuce seeds is noted in the points: Novoishimskoye, district named after G. Musrepova (67 %).

In 2016–2017, akimats of the districts carried out work to reduce the number of landfills. «On this issue, it is necessary to note a formal approach, since work in this direction has been going on for several years, and the number of completed landfills is not increasing», said the chief ecologist of the region, «Opti- mization was carried out according to the following criteria: unpromising villages, one waste disposal facility for several nearby settlements. According to the results of optimization, the total number of waste disposal facilities is 472, land plots are decorated for 235».

When studying the quality of the soil in the landfill site for two years, no dramatic changes have occurred, since nature has been spending more than one hundred years to restore one centimeter of the fertile soil layer (Fig. 1).

Soil is the bio-axial formation of the biosphere, the result of the interaction between the atmosphere, hydrosphere, lithosphere and living organisms. Chemical, physical and biological processes constantly and simultaneously take place in the soil. 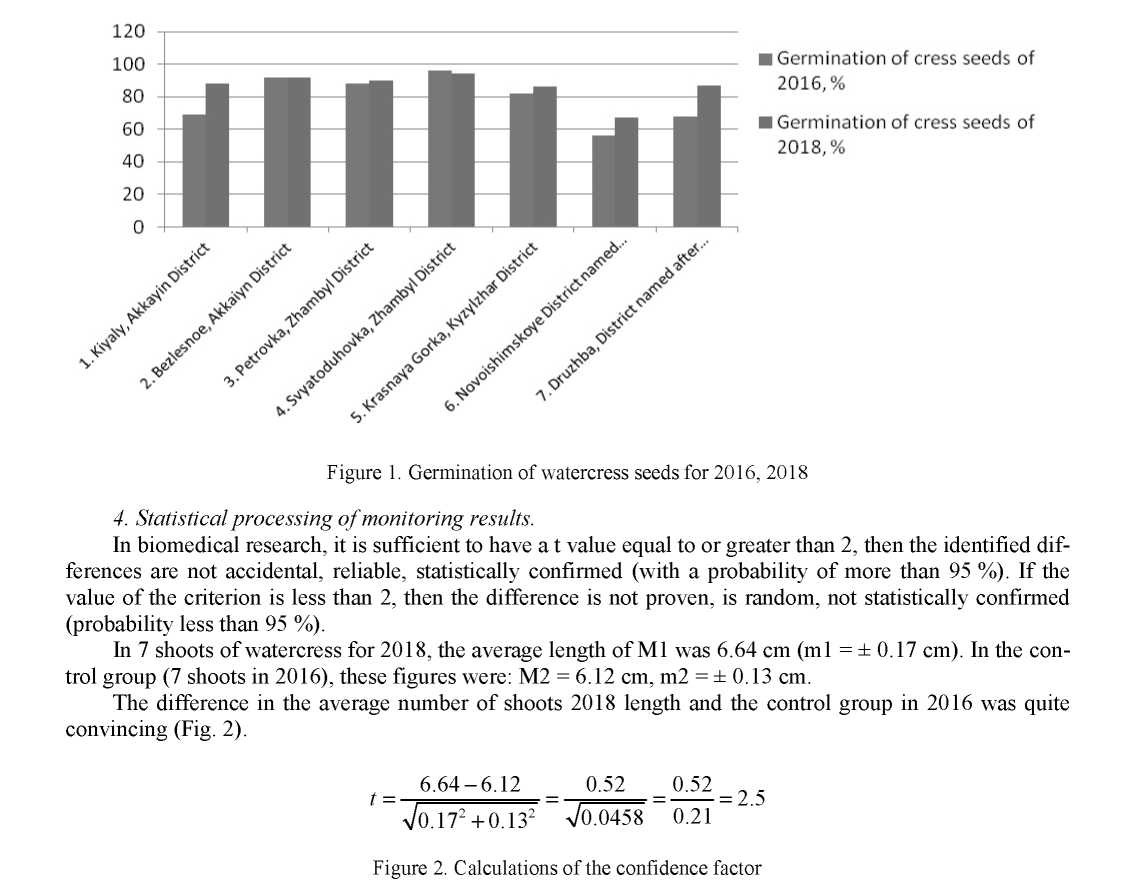 The principle of biological soil diagnostics is based on the idea that soil as a habitat constitutes a single system with populations of different organisms inhabiting it. Depending on the combination of natural factors that determine the soil-forming process, different soils differ in the composition of their biota, the direction of biochemical transformations and the content of those chemical components that are products of these transformations or their agents.

The strengthening of the anthropogenic press has led to the need to develop methods that can detect the anthropogenically caused degradation of natural ecosystems in time, establish long-term trends and the buffering capacity of biological systems in relation to diverse and mostly concurrent disturbing factors. The active use of biological methods for diagnosing anthropogenic disturbances is currently associated primarily with the rapid response of organisms to any deviations in the environment from the norm. In addition, such a reaction makes it possible to evaluate the anthropogenic impact in terms that have a biological meaning and often those that can be transferred to humans [4].