Contamination of soil with heavy metals in industrial districts of Kokshetau

The article reveals the research results on soil contamination with heavy metals of Kokshetau and Vasilkovsky gold ore deposit. Soil contamination with heavy metals is of a high danger due to the fact that soils are able to actively accumulate heavy metals. Heavy metals can further soak into plant and animal organisms straight from the soil, and then ultimately into the human body. Main soil pollutants such as zinc, copper and arsenic were identified with arsenic being the main contaminant. As a result of the research, the map was compiled, where the trial sites was marked and zinc, copper and arsenic concentrations in the soils of the industrial areas of the city and beyond was identified. It was found that in the industrial areas of Kokshetau and influence zone of Vasilkovsky gold ore deposit the soils were mostly contaminated with arsenic, and significant excess of zinc and copper maximum permissible concentrations were noted. Zinc concentration exceeded MPC value from 3 to 8 times, copper exceeded from 2 to 22 times, arsenic exceeded from 7 to 361 times.

Recently, agricultural lands pollution with heavy metals causes serious concerns in the world due to their toxicity and sustainability [1]. Soil pollution can happen out of the natural processes occurring in the environment and because of the anthropogenic impact. It is considered that the main source of heavy metals influx in the soil is mining [2]. Soils contaminated with heavy metals are the source of surface and ground waters, atmospheric air pollution and also the pollution of crops grown on these soils [3].

It is known that metals such as Cu, Fe, Mn, Ni and Zn are important trace elements for vital processes and regulation of physiological functions of organisms. However, many other metals, for example As, Cd, Cr, and Pb do not exhibit physiological activity and can be toxic even in low concentrations [4]. Chronic exposure of heavy metals leads to oncological, neurolithic and mental, cardiovascular, kidney, liver, and bone diseases [2].

Soils are the main accumulators of heavy metals entering the environment as a result of anthropogenic activity. Unlike organic pollutants, which can be oxidized to carbon monoxide (IV) via microbial exposure, most of the heavy metals are not subjected to microbiological or chemical degradation. In addition, total concentration of heavy metals persists for a long period of time after they enter the soil [5].

In many Kazakhstan regions the unfavorable ecological situation has been developed. Large areas of land have been exposed to pollution by toxic substances and their compounds. They have the greatest impact on the land, which is located near industrial enterprises, highways or oil pipelines. Large areas of polluted lands are located in Karaganda, Kostanay, Mangistau, Akmola, East Kazakhstan, Aktobe and Pavlodar regions. The development of mining industry in Kazakhstan has led to the land pollution by toxic substances and accumulation of industrial waste. The waste heaps, quarries, dumps, mining waste formed in industrial regions contribute to soil contamination with heavy metals [6].

Among the industrial production of the Republic of Kazakhstan, the main place is occupied by the most dangerous production for the environment industries: metallurgical, chemical, petrochemical, mining and construction materials production. Their share in total amount of production is at about 48.3 %. Refining and mining industries occupy 19.5 %. Most of these industries have imperfect technology, and most of the average emissions and pollution come from their share [7].

The northern part of Kazakhstan consists mostly of landscapes with sufficient and occasionally insufficient moisture. These include forest-steppe, steppe and dry steppe zones [8]. In the steppe landscapes of Kokshetau region, the calcium class (Ca2+) is a dominant one [9].

The soils of «Altyntau Kokshetau» mining and processing plant mostly belong to the calcium-sodium class and, therefore, they are enriched with arsenic compounds. The influence of «Altyntau Kokshetau» on the soil formed in industrial regions is characterized to be significant and highly exceeds the established MPC standards. According to the research results of A.S. Kurmanbayeva, pollution of arsenic, lead and copper with anthropogenic character is observed on the territory. Arsenic pollution has the most toxic effect on the environment. Its content exceeds MPC value from 95 to 5350 times. The increase in copper concentration is established in local single sites and is associated with its leaching from the ore. In Kokshetau the most intensive soil pollution is indicated to come from arsenic and zinc [10].

One particularly negative factor affecting the environmental state is the dusting of dry beaches of the mining enterprises tailings. The tailings contain radioactive and chemically toxic elements. Industrial waste generated on the territory of the region is not utilized due to the lack of enterprises for their processing [11].

In connection with the facts mentioned above, we have analyzed soil contamination with heavy metals near «Altyntau Kokshetau» gold ore deposit, as well as next to the industrial areas of Kokshetau.

The samples were taken in various districts of Kokshetau, in its industrial zone, as well as on the territory adjacent to Vasilkovsky gold ore deposit (Table).

On trial plots, four points were designated in the corners and one was indicated in the center. Four more digging points were made around each point and the surface layer of soil was collected at the depth of 0–5 cm. Prior to the start of soil sampling, sample plots were cleared out of vegetation. Selected point samples were mixed and compiled into a combined sample. The samples were analyzed no later than two days after sampling [12]. The collected soil samples were dried to the dry condition, sifted through a sieve, and then stored in paper envelopes.

Soil samples were analyzed on an iCAP 7200 ICP-OES atomic emission spectrometer in «Line selec- tion» mode. The measurements were carried out according to the method of G.L. Buchbinder.

The map was created using the ArcGIS software product. 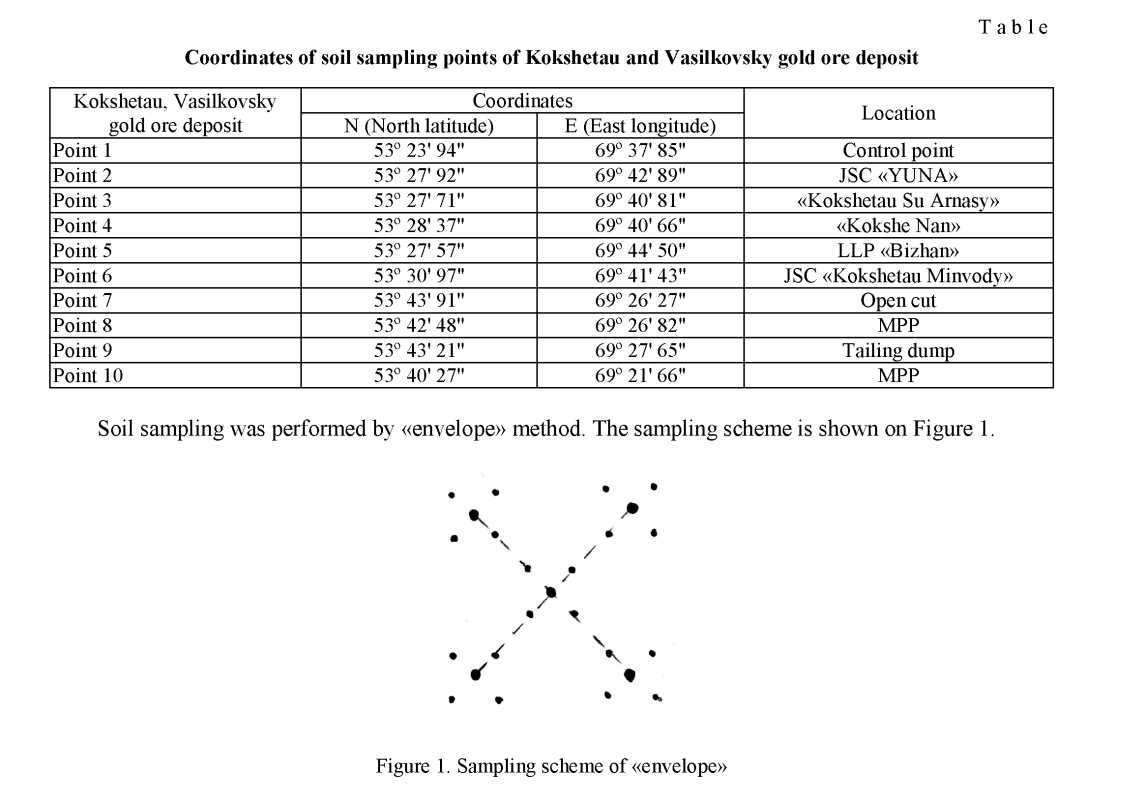 Our studies have shown that in all soil samples such heavy metals as zinc, copper and arsenic were presented. Figure 2 shows that in Kokshetau as well as out of the city, near Vasilkovsky gold ore deposit, areas with copper, zinc and arsenic excess were significant and dozens of times as more as MPC standard. 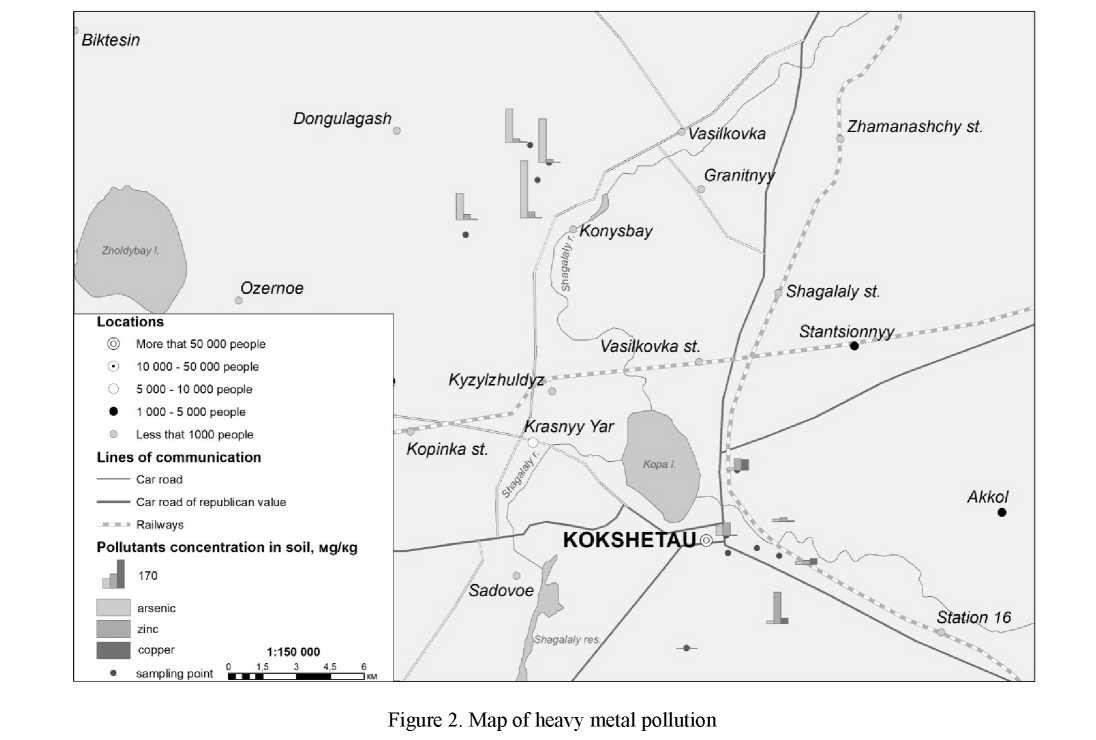 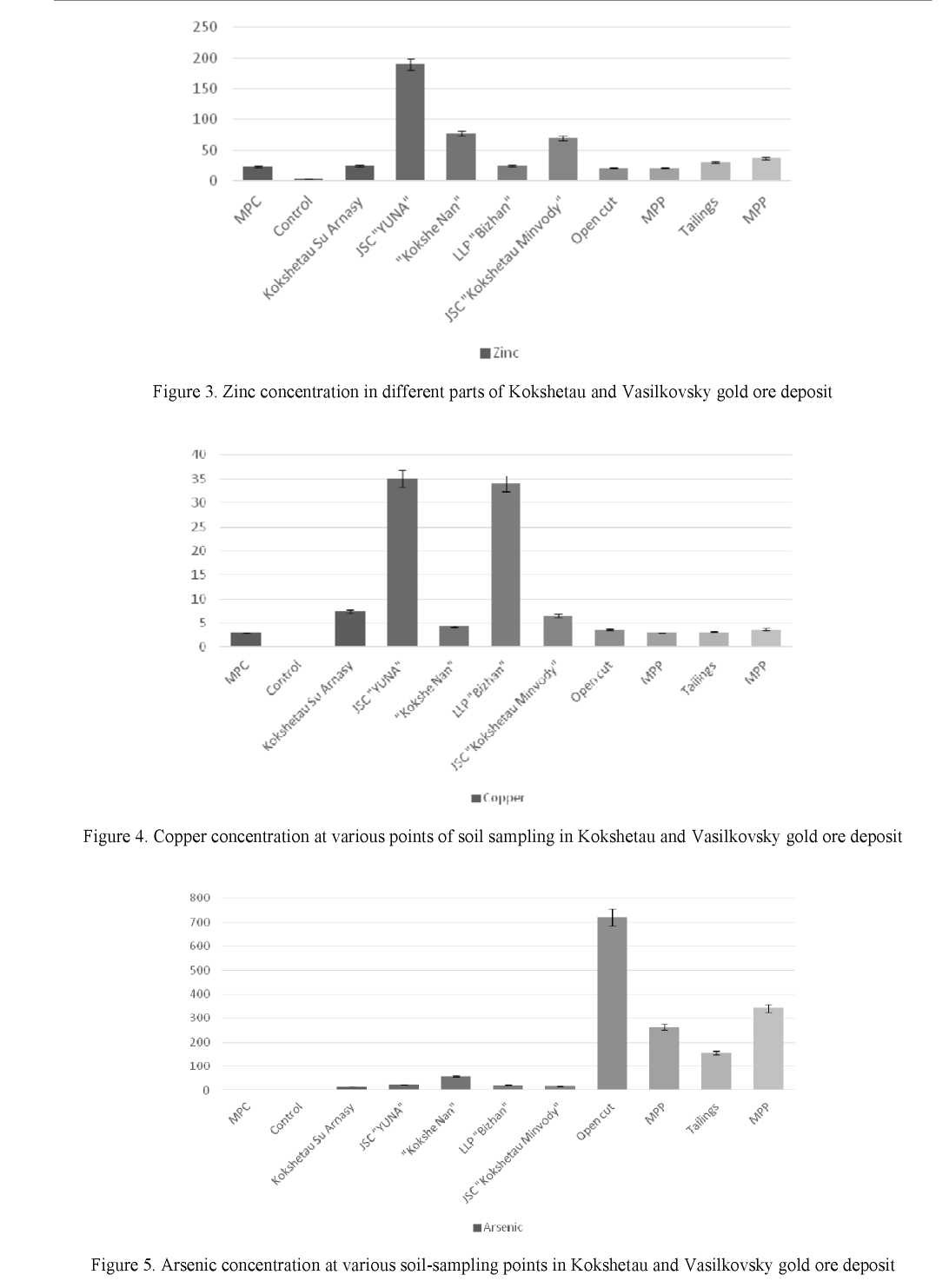 At the soil sampling points that we studied in Kokshetau and in its countryside, the concentration of arsenic varied from 14.9 mg/kg to 721 mg/kg (Fig. 5).

Thus, the study of soil contamination with heavy metals has shown that there is an intense pollution with copper, zinc and arsenic in Kokshetau area. The soils of Vasilkovsky gold ore deposit are more polluted with arsenic and zinc. The study of heavy metals concentration is very important and essential, since accumulating in soils, they can move along the food chain, accumulate in plants, animals and humans, which in turn can lead to a deterioration in the health of the whole population.