Analysis of the vegetation cover status of the city of Karaganda

It was found that the damage to the soil cover is influenced by the operation of Combined heat and power plant No. 3 (CHP-3) in the city of Karaganda, which is carried out on solid fuels (coal). In addition, direct damage to the soil cover occurs during the movement of heavy transport (cargo transportation of fuel). The object of research is located in the territory within which natural soils are degraded due to the impact of the production activity of the enterprise, and also subject to physical pollution of the soil and vegetation. The main source of physical pollution of land cover is CHP-3. Nickel excess was detected in Maykuduk, 500 m south-west of CHP-3, 1000 m north-west of CHP-3, cobalt — in Prishakhtinsk, iron — in Maykuduk, 1000 m north-west of CHP-3. An analysis of the vegetation of Karaganda showed a deterioration of the plants, a slight growth, a decrease in the number of flowers, and early signs of wilting were observed. The vegetation near the enterprise is represented by a rare and even coverage of unhealthy and unnaturally dried plants for a given season.

One of the significant factors influencing the ecology of the environment is human economic activity in construction, industry, energy, agriculture. Energy production, after consuming a huge amount of fuel and oxygen from the air to oxidize it, makes products in the form of electrical and thermal energy, and gaseous, thermal and solid products of combustion of its waste [1].

When burning fuel, toxic products of incomplete combustion can also be formed in relatively small amounts: carbon monoxide (CO) and some hydrocarbons. Emissions of TPPs operating on coal or sulphurous fuel oil may contain metals that are harmful to health or the environment: arsenic, cadmium, mercury, lead, thallium, chromium, sodium, potassium, vanadium, boron, copper, iron, manganese, molybdenum, selenium, zinc and other complex polycyclic aromatic hydrocarbons (in particular benzopyrene), and in some solid fuels — radioactive substances. In the presence of chlorine and fluorine salts in the coal, fumes of hydrochloric and hydrofluoric acids are contained in the flue gases. Metals are present in the ashes of coal and fuel oil in different quantities and combinations.

An important role in the study of the effect of heavy metals on plants is played by the study of the processes of their absorption and movement. Plants are able to absorb virtually all chemical elements from the environment in larger or smaller quantities [2].

The diversity and environmental conditionality of the vital functions of plants allows us to consider them as the main object of biological environmental monitoring. Plants are considered to be reliable indicators of environmental pollution by various toxic substances due to the fact that they cannot escape from the stressful effects, and are forced to adapt to it using physiological, biochemical, ultrastructural, anatomical and morphological rearrangements. Therefore, the recording and assessment of these changes provide a reliable picture of the conditions of the area of plant growth and reflect the state of the environment [3].

The purpose of the article was to make a comparative analysis of the vegetation cover of the industrial zone of the city of Karaganda.

Three areas of the city of Karaganda were chosen for the work: Maykuduk (area of Combined heat and power plant No. 3 [CHP-3]), Prishakhtinsk (Tikhonovka, Finskiy), South-East district.

Field studies were conducted, including the study of the territories of three areas and the collection of plants growing there.

The selection of vegetation was carried out on the border of the buffer zone and beyond. To obtain samples of plants at each waypoint, a combined sample of plants (no more than 100 g each) was taken from an area of 100×100 m in varying degrees of distance and direction. Selected plants belonged to the same species. Due to the widespread prevalence and high sorption properties, wormwood (g. Artemisia) was selected.

Plants were cut at a place not lower than 15–20 cm from the ground level, which reduces the likelihood of contamination of plants with soil dust. A general inspection of the object was carried out: the appearance of the vegetation and the population density, based on visual depletion, or an abundance of species in the selected area.

Analysis of vegetation samples was carried out at the Faculty of Chemistry, KSU named after A. Buketov. A chemical analysis of the content of heavy metals in the soil was carried out on an AA 140/240 atomic spectrometer.

Results and its discussion

Karaganda region is located in three soil and plant zones. The north and northeast of the region is represented by a zone of grassland steppes with dark chestnut soils, the south by a semi-desert zone with light chestnut soils and a desert zone with brown soils. A significant part of the vegetation of grassy steppes consists of feather grass, wormwood and fescue.

The desert zone is represented by such plants as wormwood, hodgepodge, and stiff shrubs that do not form a continuous cover.

The territory of Karaganda area belongs to the subzone of moderately dry steppes with dark chestnut soils. The land in the area of the industrial site and in the adjacent territory is of low value and is not used for agriculture. Soils are thin, usually loamy or sandy with admixture of detrital material and are mainly pastures littered with stones.

The operation of CHP-3, which is carried out mainly on solid fuels (coal), implies a negative impact on the environment of the area. Direct impact means the direct disturbance of the soil cover during the movement of heavy transport (cargo transportation of fuel). It should also be taken into account that the object of study is located in the territory within which natural soils are degraded due to the impact of the production activity of the enterprise, and also subject to physical pollution of the soil and vegetation cover. The main sources of physical pollution of land cover is CHP-3.

Analysis of samples of plant cover on the dry residue showed an excess of the MPC of substances such as nickel, zinc, cobalt and iron (Table 1).

Table 1 The concentration of chemicals in plants of Karaganda

Analysis of the zinc content showed (Fig. 2) that in Maykuduk, 500 m south-west of CHP-3 — the concentration was 14.86 mg/kg, 1000 m south-west of CHP-3 29.53 mg/kg, MPC 23 mg kg, 500 m to the northeast of CHP-3 — 27.57 mg/kg, 1000 m to the northeast of CHP-3 — 35.76 mg/kg. In the South-East and Prishakhtinsk, nickel concentrations were within the normal range. Zinc is the least toxic of all the heavy metals listed above. However, all elements become toxic if contained in excess; zinc is no exception. The physiological effect of zinc lies in its action as an enzyme activator.

An analysis of the cobalt content (Fig. 3) showed that no excess of cobalt was detected in Maykuduk, with the exception of the area located 1000 m to the northeast of CHP-3, and was 22.2 mg/kg. In the South-East, on Shakhterov Avenue, the cobalt concentration was 15.8 mg/kg, in Prishakhtinsk, Finskiy, 36.6 mg/kg.

The ability of plants to clean the soil from heavy metal ions is limited by many factors, such as the availability of metal in the soil for uptake by plant roots, the rate at which it is absorbed by the roots, the transport of metal from the root to the shoot, and the resistance of the plant. 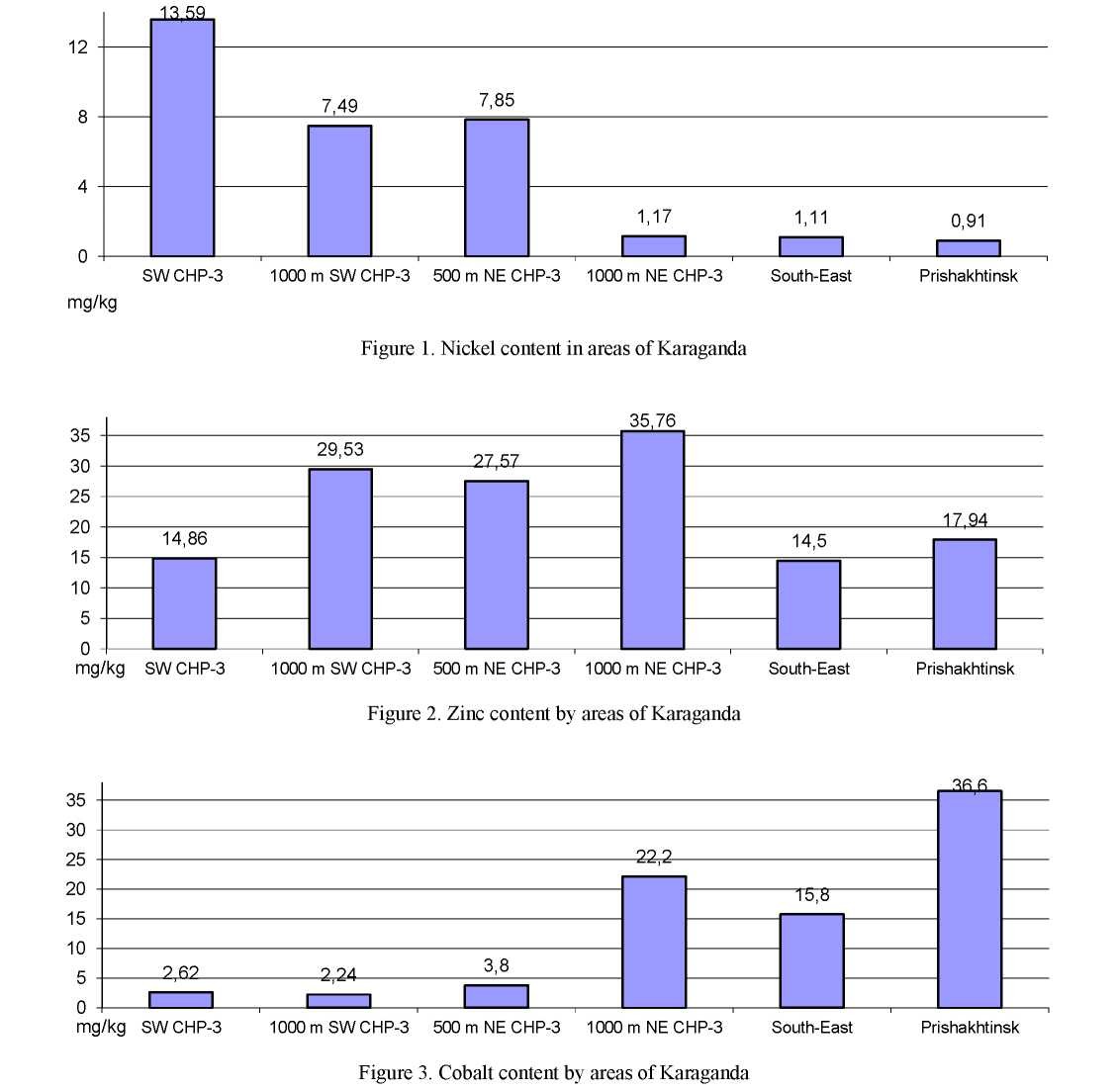 However, progress in this direction is still hampered by a lack of understanding of the physiological, biochemical, and molecular mechanisms underlying the hyper-accumulation of heavy metals by plants. In general, it should be emphasized once again that the increasing man-made pollution of the environment with heavy metals is currently a serious environmental problem. Heavy metals in high concentrations are extremely dangerous for living organisms, including plants. Many of the metals have high mobility, are easily absorbed by plants and accumulated in them, and then through food chains enter the body of animals and humans. The increase in the content of heavy metals in the environment is accompanied by its increase in plants and has a negative effect on their growth and development, which is an indicator of serious changes and / or disorders of the basic physiological processes.

Heavy metals in high concentrations have a negative effect on plant development. The increase in their content in the root zone leads to a delay in the onset of the next phenophases, slowing down of organogenesis [4].

Plants are considered to be reliable indicators of environmental pollution by various toxic substances due to the fact that they cannot escape from the stress effect, and are forced to adapt to its using physiological, biochemical, ultrastructural and anatomical and morphological rearrangements. Therefore, the recording and evaluation of these changes provide a reliable picture of the conditions of the plant growing area and reflect the state of the environment. The study showed that soil contamination with heavy metals causes a disturbance of plant ecosystems. With a high content of heavy metals in the soil, the level of heavy metals in plants increases, which leads to a negative effect on the physiological functions of plants.

The most common manifestations of the action of heavy metals on plants are inhibition of photosynthesis, impaired transport of assimilates and mineral nutrition, changes in the aquatic and hormonal status of the body, and growth inhibition.

Active migration from soil to plants occurs in metals such as iron, nickel, cobalt and zinc.

An analysis of the vegetation of Karaganda showed a deterioration of the plants, a slight growth, a decrease in the number of flowers, and early signs of wilting were observed. The vegetation near the enterprise is represented by a rare and even coverage of unhealthy and unnaturally dried plants for a given season.

Thus, the active migration of such metals as iron, nickel, cobalt and zinc occurs from the soil into the plants of the city of Karaganda. A high excess of the concentration of these substances in plants growing in the study area was established.