Results of a research of a condition of populations of Ferula foetida (Apiaceae family) in the territory of Mangystau region are given in the article. The composition, structure of populations, polymorphism, and condition of growth and peculiarities of the natural populations of Ferula foetida is studied. The general projective covering in community was from 35 to 80 %. Occurrence of samples of Ferula foetida was 0.1–0.8 pieces/sq.m. In natural populations all age states (from 1 year old to 7 years old individuals) are revealed; in a generative phase 5-6-7 years old individuals are noted. On the various populations 15–55 % of plants are observed in blossoming phase, other plants were in a phase of the radical leaf bascket. The ratio of the main age groups of plants on each described population is defined, the phytocenotic structure and some morphological indicators of elevated bodies is conducted. The received results of phytocenotic descriptions testify to a possibility of practical using of natural population of Ferula foetida.

The wide range of medicinal properties of Ferula foetida leads to great demand as medicinal raw materials, especially in such countries as Iran, India, Afghanistan and China.

In Kazakhstan this species forms industrial and valuable communities on the Embinsky plateau, in the Western lowland, Aral region, desert Moiynkumy, Balkhash-Alakul, Kyzyl Kum, Turkestan, Chu-Ili mountains [13], in the western part of Kazakhstan this species has distribution on Karatau, the peninsula of Mangyshlak, in northern and southern Ustyurt [14]. If populations in the southern regions of Kazakhstan are studied rather well, then communities of Ferula foetida in the western part demand comprehensive observation and examination.

The purpose of the present research was to study floristic composition and structure of natural populations of Ferula foetida in the territory of Mangystau region.

In field conditions carried out the description of the revealed populations with participation of Ferula foetida, determined full floristic structure [15, 16] abundance across Drudae [17], assessment of variability of above-graundparts, the analysis of age groups of plants, a ratio of age groups [18] and also sampling of plants for morphological analysis.

Specification of Latin names was conducted accordance of S.K. Czerepanov list [19]; determination of species was spent on Flora of Kazakhstan, vols. 1–9 [13] and to determinant of plants of Mangystau region [14].

Morphological indicators of the blossoming samples of Ferula foetida was estimated [19].

Statistical processing of materials of researches was carried out by G.F. Lakin [20] technique, with the use of a package of the statistical Excell 2010 programs.

Results and their discussion

The ecological confinedness of Ferula foetida to the sandy area allows ranking this species as representatives of psammophytes [4]. The species is drought-resistant and capable to sprout in places with an arid hot climate. The periodic droughts characteristic of deserts and semi-desert territories, do not influence on development of F. foetida as this species possesses a powerful root system.

Density of growth of plants depends also from the edaphic conditions of the region. The species is various by the ecological nature and conditions of location, takes part in various vegetable communities.

On the basis of herbarium material and results of field inspections the point distribution map of populations of Frula foetidaon Mangyshlak with coverage of sands Karynzharyk, Tuyesu, Sam, Akkum, Kyzyl Kum, Bostankum, loamy hills in the neighborhood of plateau Tynymbay shoky, sandy massifs around a wintering Karkol (Fig.) is made.

The description of the revealed vegetable communities with participation of Ferula foetida and their structural characteristic is given.

Tuyesu sands. They are located in a southwest part of Mangystau region on the outskirts of the settlement of Senek. Massifs are presented by the fixed and semi-fixed sands with small height difference; they are lasting from the southeast on the northeast on 30 km, from the north to the south on 12 km. In Tuyesu sands the following communities with participation of Ferula foetida are noted: saxaul-wormwood, worm- wood-ferula-herba varia, saxaul-wormwood-herba varia.

In communities such species as Haloxylon aphyllum and Haloxylon persicus, Artemisia arenaria, Artemisia terrae-albae, Iris tenuifolia, Tulipa sogdiana, Allium caspicum, Ceratocephala, Agropyron desertorum, Stipa, Astragalus ammodendron and others are presented. The general projective covering in communities fluctuated from 20 to 60 %. The numerous traces of pasturable loading in the surveyed territory are noted. 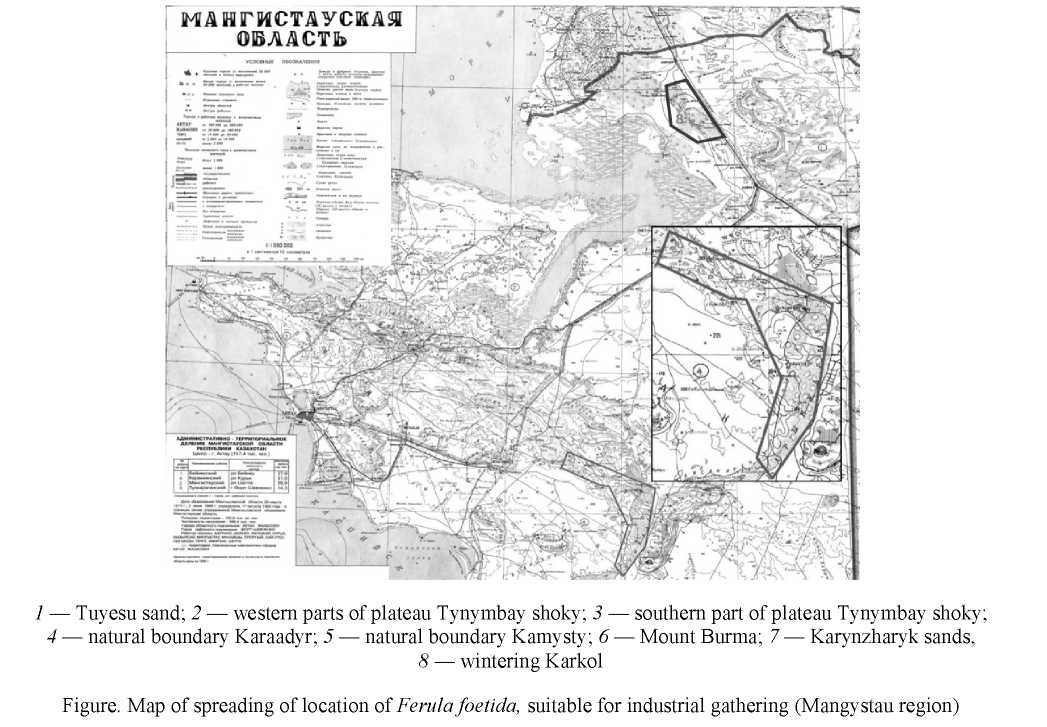 Floristic composition of saxaul-wormwood community with participation of Ferula foetida

Other species in community are carried to components with abundance from sp to un, and vitality 2–4 points. Plants are distributed in 3 vertical tiers. The top, or wood tier (height of 150–200 cm), is presented by individuals of Haloxylon aphyllum; the second tier (height from 50 to 120 cm) consists of bushes and tall herbs as Calligonum leucladum, Ferula foetida, Artemisia arenaria, Astragalus ammodendron. The grassy tier (up to 40 cm high) is presented by other undersized annual and grassy perennial plants. In general the specific structure of community is not rich, about 17–19 species that is explained by droughty conditions and acute shortage of rainfall of the last 2 years in Tuyesu sands.

Examples of Ferula foetidaare in satisfactory condition, blossoming about 20–25 % of individuals whereas the main part is in a vegetative state is noted.

Growth of individuals of Ferula of various age groups is noted: from shoots of the first year to 7-year individuals. A ratio of age groups was rather uniform: from 10 to 25 % (Table 2). Maximum amount was 2–4 year plants. In a blossoming phase in the current 2018 year there are about 10–12 % of individuals at the age of 5–7 years.

Ratio of age groups of Ferula foetida in Tuyesu sands, in the neighborhood of a wintering Karkol and on the plateau Tynymbay shoky

The specific structure of community is also not rich — about 18 taxons which occupy 3 vegetable tiers: top (from 80 to 120 cm), average — a tier of high herbs (45–50 cm) and a tier of low herbs (up to 30– 40 cm). The top tier is presented by single individuals of Calligonum leucocladum and Atraphaxis replicata, the average tier of Cousinia alata, Ferula foetida, Artemisia arenaria; the lower tier is made of Meniocus linifolia, Euphorbia seguiriana, Anisantha tectorum, Artemisia terrae-albae and others. This population differs in the high density of the plants blossoming Ferula foetida — to a half from all attendees of individuals.

The general ratio of age groups of Ferula shows prevalence of 4–7 years individuals (Table 2) and a low share of 1–3 years individuals that, apparently, is connected with a row of droughty years. It is possible to connect with this fact also a circumstance that vitality of species is lowered — from 2 to 3 points.

with participating of Ferula foetida in the Tyuesu sands

GPC in community turned out low — about 25–30 % that it is connected with an active pasture of a livestock, soil destruction after cover and a long drought.

As well as in the previous described communities the vegetable cover is created in three tiers: top wood (height of 100–200 cm) consists of individuals of Haloxylon aphyllum; the average tier — tall herbs (height of 40–80 cm) is presented by Artemisia arenaria, Ferula foetida, Cousinia astracanica; the third grassy tier (up to 40 cm high) is composed by all other species of this community.

Occurrence of individuals of Ferula foetida was 0.3–0.4 pieces/sq.m. All age states are revealed; in a generative phase 5-6-7 years individuals are noted. Total number of the blossoming individuals did not exceed 15 %.

The analysis of a ratio of uneven-age plants of Ferula foetida showed that individuals of 4–7 years age prevail, whereas subgrowth (1–3 years plants) is presented in a considerable share less (Table 2). Possibly, it can be explained with droughty conditions of several last years that it led to smaller number of shoots in Tuyesu sands.

Sands in the neighborhood of wintering Karkol. This place is located in a northeast part of the Mangystau region, near border with the Atyrau region. Sands represent the extensive sandy massifs places, which are weak-fixed; certain sites are good-fixed. Ferula meets on sands sporadically, forming small sites of communities. The microrelief is well developed.

Traces of pasturable loading in the surveyed territory are noted. Occurrence of individuals of Ferula foetida was 0.3–0.8 pieces/sq.m. All age states are revealed; in a generative phase are noted 5-6-7 years individuals. About 20–25 % of individuals were blossoming; the main part was in a phase of the radical leaf basket. Ferula populations in the current year were in depression that connected with droughty conditions — high summer temperatures and lack of rainfall. On sands it is described cereal-wormwood-ferula and eremopyron-wormwood-herba varia communities.

The vegetable cover is put by two grassy tiers: top (height of 40–100 cm) which consists of Ferula foetida, Ferula nuda and Astragalus arbusculiformis; lower (up to 35 cm high) is formed by other grassy plants and semi-low shrubs.

The specific structure of community is estimated at 18–19 species with abundance from un to sp and vitality 2–4 points. GPC made about 50 %. Among the described individuals are noted plants aged from 1 up to 7 years. In generative state individuals are noted 5–7 years age plants that made up to 25 % of the total number of plants of Ferula foetida.

The ratio of age groups of plants showed prevalence of individuals of 4–7 years age whereas young plants (aged from 1 up to 3 years) occupied only 25 %.

Eremopyron-wormwood-herba varia community (Herba xerophytica — Artemisia terrae-albae — Eremopyron orientale) is located in the western part of the sandy massif. GPC was 70–80 %. The sandy soils which are well fixed; the territory represented the plain with the developed microrelief.

The floristic structure of this community is formed by 21–22 species with abundance of un-sol-sp and vitality 2–5 points. As well as in the previous community, species are placed in 2 vertical tiers. The top tier is formed by individuals of Ferula foetida and Anabasis aphylla; the second tier — undersized grassy plants and semi-low shrubs — Tragopogon ruber, Kochia prostrata, Artemisia arenaria, Gypsophila paniculata, Senecio noneanus and others.

GPC in community made 70–80 %, individuals of Ferula aged from 1 up to 5 years are presented. In a phase of blossoming there were 5-year plants.

with participation of Ferula foetida

Vital forms in community are presented by bushes, low shrubs, semi-low shrubs and grassy forms. The ratio of age groups showed prevalence of 4 years individuals — 20 % (Table 2) whereas the share of other made groups 10-15 %.

Distribution of plants on vertical structure happens in 2 tiers. Two vertical tiers are allocated: a shrubby tier (height of 120-180 cm) and grassy with subtiers high (height of 40-55 cm) and low herbs (up to 25 cm high).

We carried out the assessment of some morphological indicators of above-graundparts of the blossoming individuals of Ferula foetida (Table 8).

in places of natural growth

The sizes of diameter of inflorescences changed from 28 to 90 cm. The minimum sizes are revealed at the individuals growing in saxaul-wormwood-herba community in Tuyesu sands, whereas maximum size was noted in a wormwood ferula-herba varia community, also in Tuyesu sands.

It is revealed that in all studied communities Ferula foetida carries out a role a dominant or the sodominant with abundance from sp to cop 2, has good vitality from 4 to 5 points. In structure of a coenopopulation ferula can enter as in lower grassy vertical (the virgin age period), so average shrubby and grassy tier (during generative period).

The point distribution map of populations of Ferula foetida on Mangyshlak with coverage of sands Karynzharyk, Tuyesu, Sam, Akkum, Kyzyl Kum, Bostankum, loamy hills in the neighborhood of plateau Tynymbay shoky, sandy massifs around a wintering Karkol is made.

The received results of phytocenotic descriptions, structures of the revealed populations and morphological assessment testify to a possibility of practical using of the natural communities of Ferula foetida.

Researches are executed within the grant project of Science Committee of Ministry Education and Science of Kazakhstan «Studying of pharmacological and ecological-biological features of a ferula of smelly (Ferula foetida) in natural populations of the peninsula of Mangyshlak and development of recommendations about its use in the medicinal purposes».