In the article the information about the effectiveness of biological methods for determining the degree of sap- robity of water bodies by the species composition of microscopic representatives of aquatic algal flora is provided. Algae are a very convenient object for bioindicating the state of aquatic ecosystems, since they make it unnecessary (or often complementary) to use expensive and laborious physicochemical methods for analyzing environmental parameters; reflect and record the speed of changes occurring in the natural environment. Phytohydrobionts, which are bioindicators of pollution, due to the influence of certain factors may exhibit different degrees of intensity of the response in the form of domination or partial or complete disappearance. In our opinion, there is a direct relationship between the intensity of the algal indicator reactions and the quality of water. One of the most developed biological methods for assessing water quality using indicator species of phytoplankton and phytobenthos was used — saprobiological analysis of the Pantle-Buck modified by Slade- cek. The possibilities of studying the anatomical and morphological organization of the microscopic flora in the educational process are evaluated. Species of hydrobionts were identified; a list of species inhabiting this watercourse was also compiled. Indicator organisms were identified, the degree of organic contamination of the studied watercourse was determined.

Ecological assessment of aquatic ecosystems using bioindication methods determines the state and functioning of the integrity of aquatic ecosystems, which enables to adopt regularities in cases where deviations from the normative indicators of the environmental situation are detected [1].

One of the relevant issues in bioindication methods is the study of algoflora as objects-indicators of the state of the environmental water systems. The most common indicator feature is the floristic composition of water organisms and its changes under the influence of any factors that violate the normal hydrochemical and hydrological regime of water bodies (watercourses). At the same time, the use of different objects and parameters of the intensity of this effect on the reaction of aquatic organisms to changes in the regime of hydrobiocenoses has not thoroughly investigated. The integrated approach to the use of different methods for assessing the state of the aquatic environment is not sufficiently used [2]. At the same time, algal flora is a very convenient object for bioindication of the state of aquatic ecosystems, as it makes optional (or often complements) the use of expensive and time-consuming physical and chemical methods of analysis of environmental parameters; reflect and record the rate of changes occurring in the environment [3].

Algae that are bioindicators of pollution, due to the impact of certain factors, exhibits different degrees of intensity of the response in the form of dominance or partial or complete disappearance. In our opinion, there is a direct relationship between the intensity of the reaction of algae-indicators and water quality.

Thus, the analysis on methods of environmental assessment of aquatic ecosystems shows that algal flora, which is popular among many researchers as bioindicators to distinguish the advantages or disadvantage of hydrobiocenosis, can be easily applied in assessing water body.

The objects of the study: phytoplankton and phytobentos of some areas of the Bookpa river (positioned in the South-Eastern part; the Karaganda state zoo area).

The species diversity of invertebrates of the watercourse enables to determine the degree of saprobity, as an ideal material for research. The study was conducted from January to December 2017.

During the microscopy of the river bend sections of the Bookpa river, algal flora species that derived from 5 genera belonging to the Bacillariophyta.

Cal0neis (Fig. 1). The cells are single, in the preparation usually lie on the side of the leaf. Shell with a rectangular belt. The leaves are linear, lanceolate or elliptical, sometimes with wavy edges. The ends are usually rounded. The seam is slit-like (there is on both wings), straight, Central. Cal0neis species which are found in benthos of fresh and brackish water bodies.

FragiUria cells are collected in ribbon-like or comb-like colonies, in which the cells are connected by the entire surface of the valves or only their extended part (Fig. 2). Cells usually lie in the preparation from the side of the girdle. Two chloroplasts, lamellar. The shell from the side of the belt is linear or spindle-shaped. Leafs are linear, linear-lanceolate or elliptic, sometimes extended in the middle part.

FragiUria species are found in the plankton of fresh and brackish water bodies, on wet rocks and mosses, among fouling, in raids on underwater objects. Feed on phototrophic. It is specified by propagation of cell division [4].

The algae cells Melosira, having the form of a short cylinder bond slime in filamentous directly to the colony (Fig. 3). Usually the cells lie on the medieval side of the girdle. Chloroplasts are small, lamellar, located in the peripheral cytoplasm. The shell with a cylindrical belt. Fold bend deep, structural. Sashes are round, flat or convex, covered with small spines or granules.

Melosira species are found in the plankton and benthos of freshwater bodies and seas. It feeds photo- trophic, propagated by longitudinal cell division. They may cause «blooming» of water.

Pleurosigma salinarum cells are S-shaped (Fig. 4). At high magnification on the sash visible small oblique hatching. Algae of this kind live on the bottom both in continental brackish waters and in the seas. They feed

phototrophic, reproduce by longitudinal cell division. Quite widespread in the waters of our country. The structure fold pleurosigma geometrically correct and, as surirella, drugs pleurosigma used to assess the optics of the microscopes.

Syimdra cells are single, narrow linear or linear-lanceolate, from the leaf — with pointed ends, from the belt — rectangular, free-floating or attached to the substrate by one of the ends (Fig. 5). Rarely cells form bunchy-fan-shaped or bunchy-stellate colonies.

Syimdra species are found in the plankton of still and slowly flowing waters, among fouling on large aquatic plants, including green algae. Feed on phototrophic. Multiply by dividing cells in two. Widespread species [5, 6]. 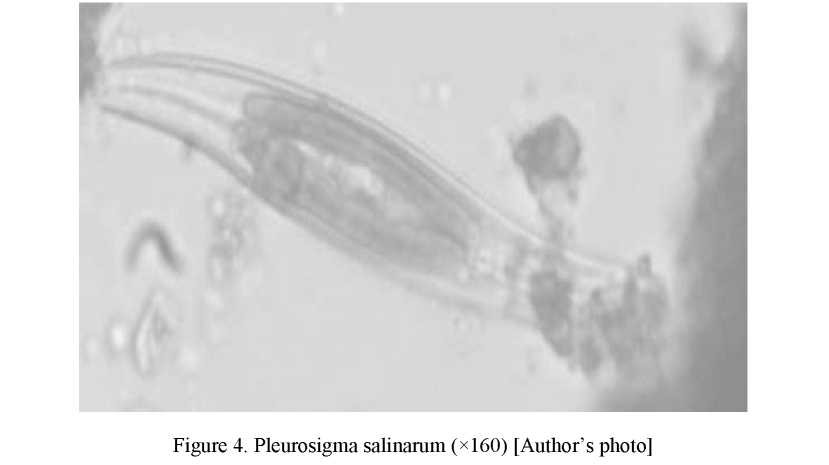