The main issue in the article is that saigas have been inhabited in ancient times. At present, the main populations of saiga antelopes are stored only in the Kazakh land. The country has protected zones, changes in seasons and migration paths. The issues of mass involvement of saiga antelopes, measures and their survival are described. The «Altyn Dala» Association for the Conservation of Biodiversity of Kazakhstan for 2013 has been created to further improve the work of the Specially Protected Natural Areas (SPNA), i.e. saiga conservation. Nature Protection Initiative informs that nature protection personnel have been provided with special equipment and related trainings. End of November — beginning of December is a very important time for saigas, especially for males. The number of females is several times higher than males; however, females become weaker often, die or become food for predators, such as fox, corsac. The survival rate of these wild animals is very different. Life expectancy of males is 3–4 years, the age of females can reach up to 9 years. Therefore, wild antelopes grow rapidly. Females begin to be fertilized in 7 months. Males are sexually active in two years. The morphometric characteristics of the internal organs of the saiga were studied less than other morphological features (exterior, craniometric, etc.).

Actuality of the research

One of the representatives of the mammals who survived the ancient mammoth fauna of the Eurasian steppes and deserts is the saiga population currently populated only on the territory of Kazakhstan. In ancient times saigas survived the Don River in the southern part of Europe up to the banks of the Irtysh and the Ob River. In the last century, human ecosystems have been devastating in the process of saiga evolution.

Most of the saiga antelope (80–85 %) is part of Kazakhstan. There are three main populations in the country, isolated from the steppe antelope. They include: Betpakdala (between the Aral Sea and Lake Balkhash), the Ustyurt Plate (between the Aral Sea and the Caspian Sea), and the Ural Orphanage (Volga and Ural among themselves). In the winter, the Ustyurt population is Uzbekistan to the south, and a smaller part to Turkmenistan, and the Ural population is on the territory of Russia, but in spring, their migration routes are directed to Kazakhstan [1].

The ecological corridor for the first saiga in Kazakhstan was created in 2004 in Kostanay region for the purpose of the public environmental organization «Naurzum», area of 31253 ha. Established in 2007, the Ir- tysh-Turgay MRR, established in the western part of the Aral Sea, and the Altyn Dala MTP, established in 2012, cover the Betpakdala populated areas and the saiga antelope. However, adverse effects on the part of the protected area are in place that is to protect the hunting catch for horns of the male antelope. For the further improvement of these two SFSs, i.e. the conservation of saiga antelopes, the 2013 Environmental Protection Initiative of the Association for the Conservation of Biodiversity of Kazakhstan conducted special trainings and trainings for nature conservation professionals [4, 5].

The saigas are polygamous animals. About 3000 saiga females gather in the hive. At the end of November or beginning of December is a very important time for saigas, especially for the male part of the population: at the time, the goat's loins are constricted and the hooks fall off and the beard drops low. Fertilization doesnot take much time; every heifer rises to 40-50 heifers within 1-2 days. In recent years, an aggression has been averted to get the horns of the saiga, and the number of goats has dropped dramatically. Since the number of maternal breeds is several times higher than the heifers, some unhealthy young, inexperienced young mothers become weaker, die or become food for predators such as fox, corsac. When the bleeding ends, the climate is not cooled down and it is suitable for pasture, and it is harvested again by the end of January and early February. As a result of these battles, saigas are subdivided into smaller groups. Saiga antelopes are involved only in the attack. At that time, the strongest females collect their females (40-50 female antelopes) and form an infant. Their females keep their area in a radius of 30-80 m and cover the snow, the plants, and the remains of the urine and the lake. Parents are more likely to divide between the ankle and the groin at the joint. Their body is drowned in the wound, and the blood flows from the mouth and the wound. After the attack, saiga antelopes are so weak that they become either easy prey to predators or die back to life. The fierce battle between heroes leads to death [6, 7].

The survival rate of these wild animals is very different. Life expectancy of males is 3-4 years, and this age can reach up to 9 years. Therefore, wild antelopes grow rapidly. Each year their mother is supplemented with 2-3 tablets, and seven months later, chewing (herbs) is released and the goat is released. After the show, they bring their first generation. In addition, breast-feeding can take place 2 years after sexual maturation. Usually in May, their females are separated from the common herd, trying to find undisturbed plains in the steppes and bringing their descendants in unprotected places. They do not come into the liver like other species of animals, but are raised vertically. If saiga antelopes are first recorded, the varnish will be unique. Then they bring two, sometimes even three times. Saiga antelopes are completely unsuccessful in the first days and they are only found on the ground. But growing nuts do not interfere with their mother, they are the most obedient generation in the wild. A week after the birth of the flu, he begins to follow his wife, and in two weeks he goes with her. However, the grass itself only takes about a month to swallow.

Small herds of herdated herbs can be found in the entire territory of the populace. However, the main hereditary herbs are found in the exact site of the fetus. The density of the newborns in such an assortment is between 0.3-0.4 and 5-6 individuals per hectare. Such places are often referred to as «maternity hospitals». Washing time is about 5 months. The maturity period usually ends in May. Parents are twins, rarely, and very rarely three times. In the first couple or two days, younger clans can not follow their ancestors, hiding in dangerous conditions, but it is difficult to observe them. Milking lasts up to two months, but from the second month the herd begins to eat grass. The newborn will be 2-4.4, average 3.5 kg. After about a month, small horns begin to appear in the male body. In 6 months, they grow up to 10 cm and remain black. During the 1314 months, the horns become bleached and burst.

Females begin to be fertilized in 7 months. Males are sexually active in two years. Saigas until the age of two are converted to stable teeth, from age 3 to the formation of upper chewing teats. The degree of swelling of the shovel teeth in patients older than 3 years is determined. The steppes are 5-6 years old and 10-11 years old females.

The morphometric characteristics of the internal organs of the saiga are slightly lower than other morphological features (exterior, craniometric, etc.). Newborn male weights are 2.9 ± 0.2 kg, and weighing less than 2.5 ± 0.2 kg. In adult animals weighs 12-15 times, weighs 5.5 years and weighs 43.5 ± 2.8 kg and 7.5 years old weighs 28.7 ± 1.3 kg. The process of growth up to a year and a half is intensified, which grows 7.4-8.2 times, and in the population this growth process is 49,4 %, and females grow up to 71,4 % of the adult animal. Growth rates are slightly different than their females. Sexual diminution to 2.5 years of age is not observed, but in the later period, the weight gain increases rapidly and adds up to 1.5 times the weight.

The threat of complete disappearance of saigas can not be traced back to home or raised in detention. The patience and rapid reproduction of saigas could have been the most effective livestock in the case of trained animals, but they were hardly ever grown in the surrounding area, wherever they were taught. As a result of the experimental work done at the Asania-Nova Nature Reserve, saiga antelopes have been hunted for more than a decade and hundreds of thousands of hectares. Saiga breeding is carried out on the experience of Rostovsky reserve. The ants do not have freedom, that is, they can easily be reflected when they are in the fence, the females are fertilized, but there are some difficulties in the growth of the weed. The animal is very vulnerable to depression, and the duration of its survival is insignificant; the fertile population is rapidly exploding and leading to death. However, zoologists and scientists are hoping to solve this problem. Saiga antelope studies are continuing in zoos. He is also working for foreign scientists-zoologists [8].

Sexual proportions of young adolescents show the legality of the relationship at the initial stage. The number of saiga antelopes increased in the years that followed. This process is common to all populations.

There is a significant infliction of severe damage to newborns during mass calving. However, the proportion of deceased mothers with newborns was higher. Coupling does not have a significant effect on sexual intercourse during general calving. It remains unchanged at the same sex ratio as the embryo.

Results of the study: during the calibration work, the samples from adult female saiga were collected and, as a result, it was determined that the percentage of male adolescents was high. This exception is directly related to the existence of good habitat for the populations living in the region (Fig.).

Saigas can be characterized in a number of ways. It depends on the maturity of the animals, that is, the male and female saiga.

Sexual structure of saigas controlled by the saiga population in Betpakdala, %

In some comparisons, the number of saiga antelopes was higher in the second ratio than the initial ratio. In accordance with the method, the control work is performed in large numbers among females with 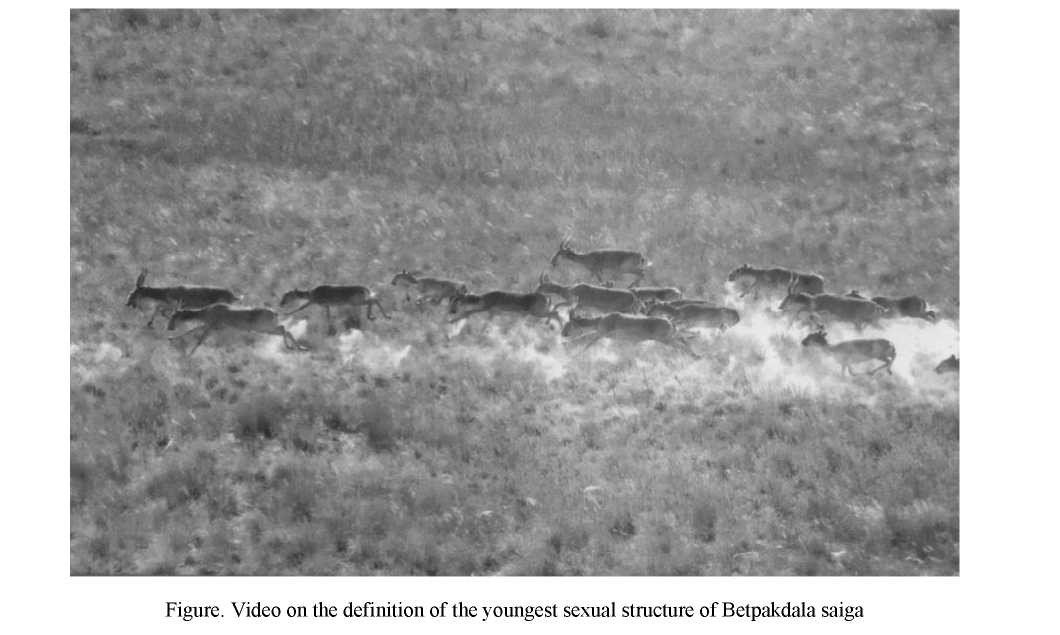 concentrated females. It allows you to quickly collect the necessary materials. There was no monitoring of the peripheral sites of newborns with low birth density. If we take into account the above, the prevalence of newborns in the spaces depends on the quality of the saiga.

One-year-old babies detained in October-November in the Ural population (n = 3991) were 47.1 % of male and 52.9 % female saiga. In Betpakdala, these figures (n = 1418) were 49.5 % for mothers and 50.5 % for females. Sexual proportions of one-year-olds of 5-6 months were close to each other. Even older adult animals have been characterized by the presence of abundant saiga antelopes. The reason for this is the fact that in the winter, there were cases of mass mortality among saigas and the slaughter of male saiga antelopes. In the autumn, 2-26.5 % of adult males were included in the control group, while the share of adult females was 26.48 %, the share of young females was 38 %, the share of young females was 15.4-36 %.

We believe that it is appropriate to conduct and strengthen research activities on the method of monitoring the saiga population growth by identifying the annual and seasonal growth dynamics of the Betpakdala saiga populations, populated by steppe and semi-arid regions of Kazakhstan, and their subsequent growth and retention of the population.