The article is devoted to the study of the reaction of the pulmonary circulation and the state of the blood in response to the prolonged (2.5 and 10 months) stay of rats at an altitude of 3200 m above sea level (Tien Shan, Tuya-Ashu Pass). As a result of the study it was found that the systolic pressure in the pulmonary artery increased to 60 % by the 2-month period and was increased throughout the stay in the mountains, with a constant diastolic pressure. As a result, the pulse pressure increased, which indicates an increase in the rigidity of the vessels of the pulmonary artery basin as the main cause of an increase in systolic pressure. Impedance in the lung tissue significantly increased by 30 %, which indicates the restructuring of the pulmonary vessels as an expression of a kind of «autoregulation» described by Folkov for vessels of the systemic circulation. Blood indices indicate long-lasting mechanisms of adaptation to high altitude, an increase in hemoglobin content in red blood cells. The role of erythrocytes in the conditions of the Tien Shan Highlands, apparently, is not so significant, at least in earlier periods of stay in the mountains.

Numerous studies have established that alpine hypoxia leads to pulmonary hypertension and hematopoietic stimulation [1-4]. In this case, the reaction to a relatively short-term stay of lowland animals in the mountains was most often studied. However, it is known that aboriginal animals of highlands and people constantly living in the mountains have significant differences in a number of important blood and blood circulation parameters (erythrocytosis, increased hemoglobin content in erythrocytes, redistribution of blood flow in the lungs) [5-7]. Based on the aforementioned and some experimental facts indicating the development of high- altitude deterioration [6, 14], it can be considered that even after a long period of adaptation in the mountains, it cannot be regarded as stabilizing at a certain level [4, 9, 10].

In connection with the above, the purpose of this work was to study the reaction of the pulmonary circulation and the state of the blood in response to the prolonged (2.5 and 10 months) stay of rats at an altitude of 3200 m above sea level (Tien Shan, Tuya-Ashu Pass).

Experiments were carried out in summer on adult Wistar rats, previously (2, 5 and 10 months before the experiment began) delivered to the base and kept at room temperature on a normal diet without restriction of food and water. Part of the animals died during the exposure, and in the experiments 25 (2 months), 18 (5 months) and 10 (10 months) rats were used. Acute experiments on rats were performed with natural respiration under nembutal anesthesia (30 mg/kg intraperitoneally) in the supine position. Hematocrit and hemoglobin content were determined by standard methods, the number of erythrocytes was determined by means of Picoscale P-4 (Hungary). The pressure in the pulmonary artery, the blood flow of 5 conditionally isolated areas of the lungs (apical, ventromedial, ventrobasal, dorsomedial and dorsobasal) was determined by catheterization of the pulmonary artery through the right jugular vein and transbronchial regional electroflumogra- phy, which determined the blood flow, blood filling and air content per unit volume [9, 11]. Graphic recording of pressure, electroplethysmogram and electrocardiogram were performed on the Mingograf-34 (Siemens-El- ema) inkjet recorder (Fig. 1). The position of the probe of the electroplethysmograph in the indicated areas of the lungs was controlled by an x-ray device («Arman-1») in two projections and after autopsy of the animals (Fig. 2). The electrical resistance of the blood taken during the study was determined in a special cuvette (0.2 ml) using the same electroplethysmograph. Thirty-five Wistar rats examined on the plain served as controls.

The material was processed statistically using student's criterion. The result was considered reliable when р < 0,05.

It draws attention that the mass of animals after 2 months exposure was 29 % lower than in the control, and continued to decline steadily (Table). Such a picture is also observed during a long stay of a person in the mountains [12, 13] and is indirect evidence of the lack of stabilization of the adaptation process even in conditions of such a long for rats stay at high altitude.

By the 2-month period, systolic pulmonary arterial pressure was increased by 60 % with unchanged diastolic pressure (Table). As a result, the pulse pressure increased significantly, which indirectly indicated an 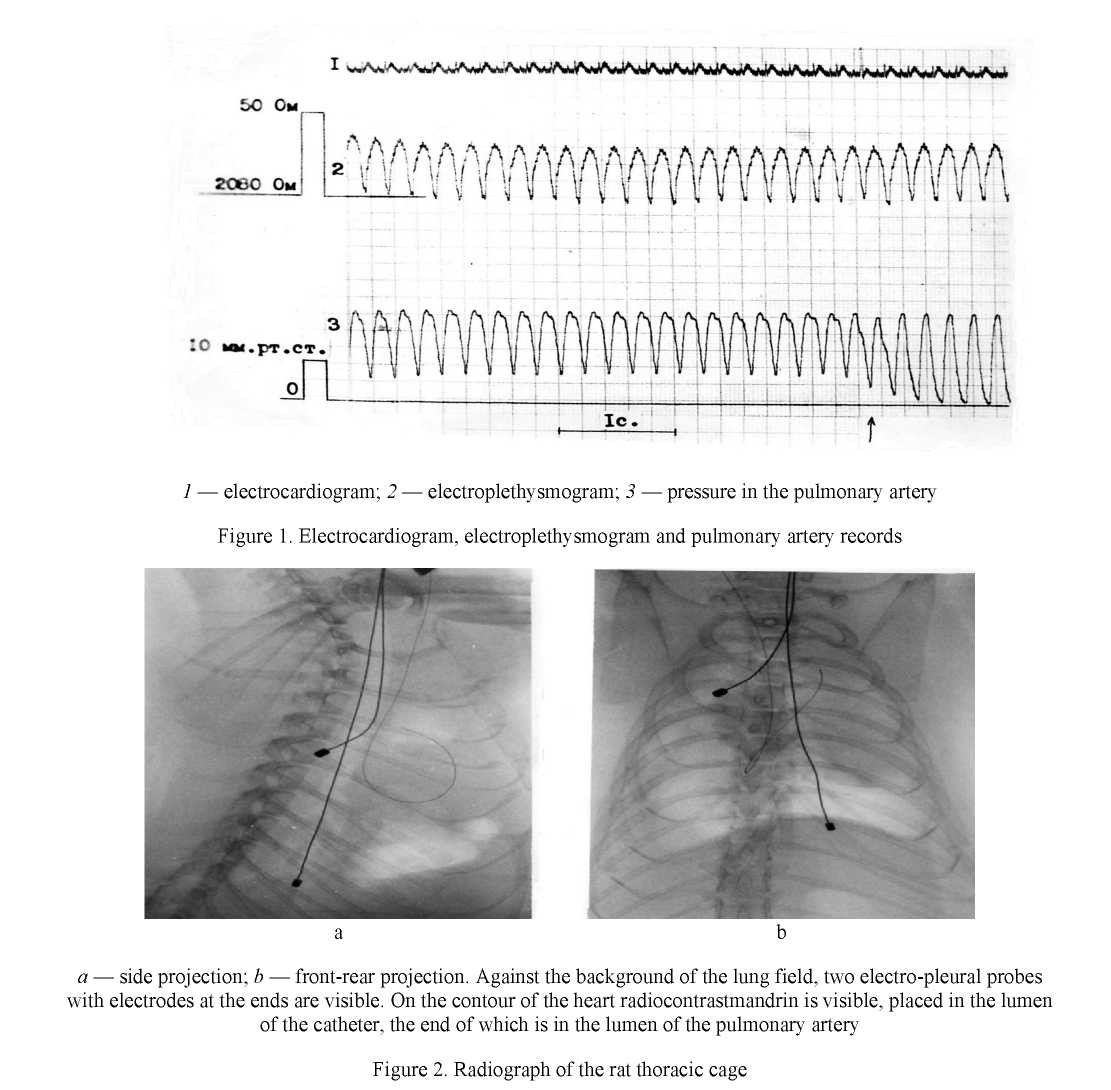 increase in the rigidity of the vessels of the pulmonary artery basin as the main cause of an increase in systolic pressure. This is confirmed by an approximate calculation of the characteristic impedance [14, 15], which reflects the measure of resistance of relatively large vessels of the pulmonary bed to the pulsating blood flow. The impedance increased approximately by 30 %, which may indicate an approximate restructuring of these vessels as an expression of a kind of «autoregulation» described by Folkov [16, 17] for vessels of the systemic circulation. It should be noted that hypoxic stimulation of the carotid and aortic chemoreceptors also led to a decrease in stretchability of the pulmonary arteries [15, 18].

Pulmonary artery pressure, red blood indices and body weight of rats in various periods of stay in the mountains (M±m)

As it is known, pulmonary hypertension is attributed to the role of redistributive (for blood flow) and functionally expedient active factor [19, 20]. When analyzing the behavior of blood flow and blood filling of the lungs after a 2-month adaptation of rats to high altitude hypoxia, only in the ventromedial site could be noted a significant decrease in these indicators (Fig. 3 and 4).

Staying in the mountains for 5 months leads to the return of blood flow and blood filling in the mentioned area to the initial level, and the increased pressure in the pulmonary artery is maintained (Table). The greatest changes in this period are observed in the blood — the specific electrical resistance, hematocrit, and the number of red blood cells are reduced, but the hemoglobin content continues to increase. This leads to an increase in the oxygen capacity of the blood to 29 ml/100 ml, which even with a slightly reduced number of red blood cells improves the supply of oxygen to the body. The metabolic changes leading to a change in the affinity of oxygen for hemoglobin and an increase in its recoil to tissues probably also contribute to this [15].

At the 10-month adaptation stage (Fig. 5), a further increase in systolic pressure is observed in the absence of an increase in diastolic pressure (Table). The blood flow increases in the ventromedial region, while in the apical region of the lung it decreases significantly (Fig. 3). According to the severity of the blood filling reaction, the ventromedial area is again the most labile (Fig. 4). The mechanisms of such redistribution are still unclear and do not fit into the known schemes of a more uniform regional blood flow under conditions of high- altitude hypoxia [3, 4]. Probably, in this case more complex adaptive reorganizations of the cardiovascular system occur [14, 16].

The combination of the available facts gives grounds to believe that one of the constantly and long-lasting mechanisms of adaptation to high mountains is an increase in the hemoglobin content in red blood cells and a corresponding increase in the oxygen capacity of the blood. Along with the change in the dissociation constant of hemoglobin and adaptation to hypoxia at the tissue level [5, 17], this forms the basis of an energetically more favorable adaptive mechanism. The role of erythrocytes in the conditions of the Tien Shan Highlands, apparently, is not so significant, at least in earlier periods of stay in the mountains [1, 2].

As for the role of pulmonary hypertension, as shown by our study, systolic hypertension, more research is needed here to clarify both the intimate mechanisms of its origin and its role in the regional redistribution of blood flow and blood filling in the lungs.