The article is devoted to the study of growth of morphofunctional indices of modern schoolgirls of 7-17 years old in Pavlodar and Kyzylorda. The results of the study of such anthropometric parameters as body length, body weight (BL, BW) and chest circumference (CC), wrist strength (WS), amount of reserve fat and active body weight of schoolgirls and their increase in the age range from 7 to 17 years are presented. In the article the growth of blood circulation system indicators such as heart rate (HR), systolic blood volume (SBV), minute blood volume (MBV) in girls of 7-17 years old in Pavlodar and Kyzylorda after a standard load of 12 kg/min relative to the resting state (in %). It was found out that in ontogenesis from 7 to 17 years of age anthropometric and functional indicators of physical development of all examined schoolgirls significantly increased. It was noted that there are significant differences in many ages between peers living in Pavlodar and Kyzylorda. Thus, the values of BW, CC, wrist strength, active body weight are lower in schoolgirls from Kyzylorda than from Pavlodar, while BL is higher in girls from Kyzylorda aged 14-17 years. The data obtained testify to the regional peculiarities of schoolgirls' development and determine the need to continue monitoring studies and observations of changes in the condition of schoolgirls in these regions.

Clarification of child development regularities, specificity of physiological systems functioning at different stages of ontogenesis and mechanisms, which determine this specificity, is a necessary condition for ensuring normal physical development of the younger generation [1].

Systematic observations of growth and development are an important link in the system of control over the state of health of the younger generation. One of the most relevant directions for the study is the establishment of shifts in the indicators of physical development of children and adolescents over time, characterizing morphological changes in the development of the population from generation to generation [2, 3]. Thus, knowledge of the individual capabilities of a child and prediction of his or her ontogenesis is a prerequisite for the successful education and upbringing of children without compromising health [4, 5].

The aim of the following research is to study the growth of morphofunctional indices of modern schoolgirls of 7-17 years old in Pavlodar and Kyzylorda.

The reserve fat content was determined by indirect method of caliperometry [8]. Then, the developed tables were used to determine the percentage of reserve fat in the organism of the subjects for different age groups [9]. This, in turn, made it possible to calculate the body fat and active weight (FBW and ABW) [10].

The state of the cardiovascular system was evaluated by heart rate (HR) under relative rest and standard exercise. Heart rate was determined with the help of electrocardiograph «Aksion EC 1T-07». Blood pressure (BP) was measured using Korotkov's auscultative method, taking into account the width of the cuff for children. Blood volume systolic (Blood volume) was determined by the formula «Stagg Y» [11] in the modification of N.S. Pugina and Ya.F. Bomash (1963) [12], the Minute volume of blood circulation was determined by the formula (MVB = SBV×CC).

All obtained material was processed using statistical analysis methods. Reliability of the differences was estimated by the Student's t-criterion, the differences were considered reliable at p < 0.05 [13].

Research results and their discussion

Note. Reliability of differences in mean values for non-parametric independent samples: * — in relation to the previous age group (p < 0.05); # — when comparing schoolgirls living in the northern and southern regions of Kazakhstan (p < 0.05); P — Pavlodar, K — Kyzylorda.

Children living in Pavlodar have a significantly higher Ketle index, while the structure index is much lower in comparison with schoolgirls living in Kyzylorda. At the same time, (Tables 1 and 2), the value of theKetle index in ontogenesis increased, and the values of the stennsion index decreased, which indicates an increase in the density of the body and a decrease in the severity of dolichomorphism in all children surveyed.

There was no particular pattern of fat percentage in girls in both cities. At the same time, the absolute content of reserve fat in the age period from 7 to 17 years for schoolgirls living in Pavlodar and Kyzylorda increased by 9.4 and 7.4 kg, respectively, compared to the original data.

According to the data obtained (Tables 1 and 2), the values of absolute and relative values of the wrist dynamometer significantly increased with age in all surveyed schoolgirls in both cities. Thus, the absolute values of wrist strength for the period from 7 to 17 years increased by 38.3 and 37.4 kg, respectively, with significant differences between schoolgirls of Pavlodar and Kyzyorda (p < 0.05).

Note. Reliability of differences in mean values for non-parametric independent samples: * — in relation to the previous age group (p < 0.05); # — when comparing schoolgirls living in the northern and southern regions of Kazakhstan (p < 0.05); P — Pavlodar, K — Kyzylorda.

The degree of cardiovascular system response to physical activity in different age periods is of great importance in the assessment of functional reserves and adaptability of the body to adequate blood supply to the body [14].

At the same time, a significant increase in heart rate and MVB indicators reached the maximum values in the puberty period for schoolgirls of both cities compared to younger age. All female schoolgirls surveyed had a slight decline in SBV with age.

Thus, the increase in heart rate and MBV growth in the surveyed schoolgirls of both cities during puberty indicates a decrease in the economic activity of the circulatory system during this period of ontogenesis.

Thus, in ontogenesis from 7 to 17 years of age, anthropometric and functional indicators of physical development of all examined schoolgirls significantly increased. It has been established that morphofunctional development of the examined girls is subject to general biological laws and is characterized by heterochronicity and discontinuity. There are significant differences between peers living in Pavlodar and Kyzylorda in many ages in terms of physical development (length, body weight, chest circumference, hand strength), especially in terms of relative indicators (Ketle index, stenin index). The data obtained testify to the regional peculiarities of schoolgirls' development and determine the need to continue monitoring studies and observations of changes in the condition of schoolgirls in these regions. 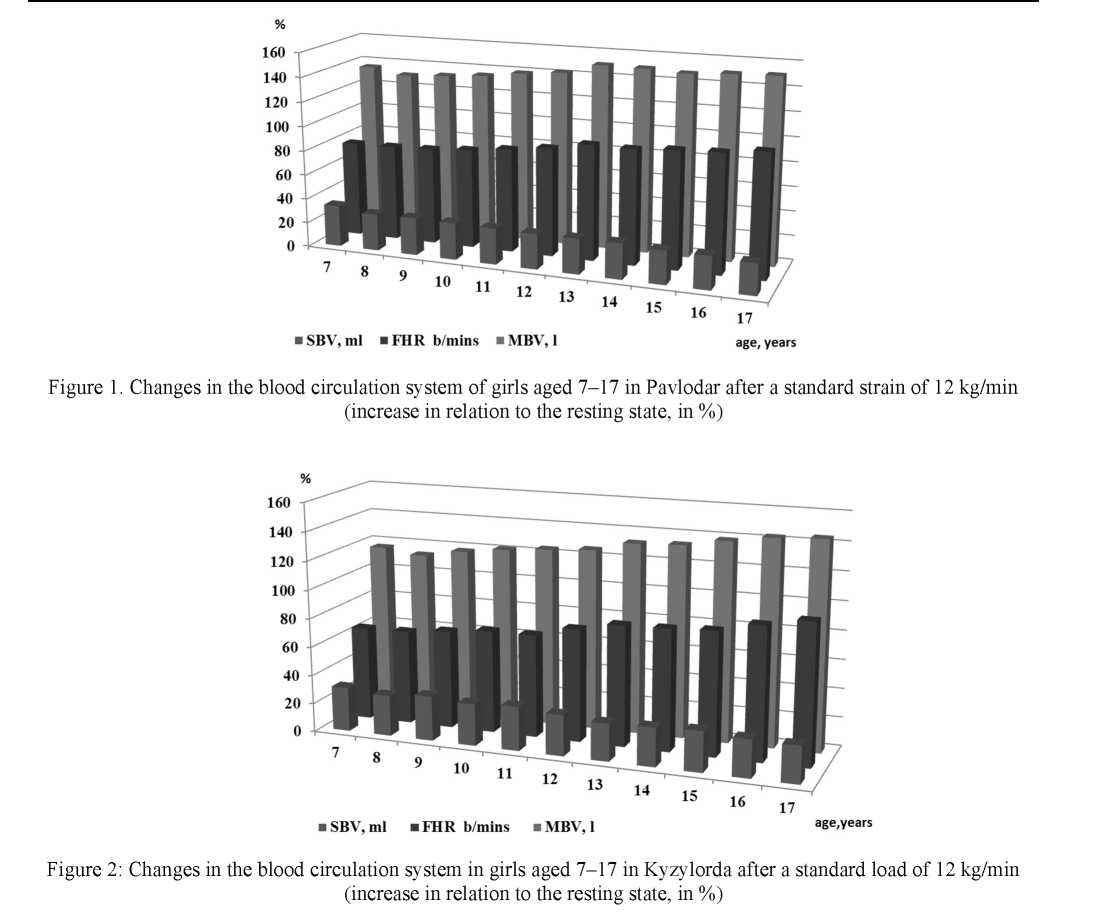