Authors investigated the nature of the direct effect of the diabetogenic derivatives of 8-hydroxyquinoline (TSQ) on pancreatic β-cells in experiments on a tissue culture model of isolated pancreatic islets (IPI), which allows us to study the direct effect of target concentrations of investigated substance on cells, whereas in experiments on animals, the metabolism of a substance injected into the body with the subsequent effect of metabolites on β-cells is not excluded. In experiments with IPI of newborn rats, TSQ was added to the nutrient fluid; after cultivation, the material was fixed in Bouin liquid. Histological and highly specific histochemical methods specific for insulin and zinc in β-cells were used to assess the insulin content in β-cells and the state of the islet's histostructure. Results. It was shown that the direct effect of TSQ on β-cells is accompanied by cell destruction and a significant decrease of insulin and zinc content (from 1.68-1.74 pu in intact islets to 1.04-1.18 pu in experience), which is the reason for the destruction of islets and the development of type 1 diabetes. When choosing research methods, the most complete results are obtained by using of a complex that includes two methods — histological or combining the properties of histological and histochemical and one of the histochemical specific method for insulin and zinc in β-cells. In manual selection of purified pancreatic islets, the number of damaged IPIs is several times less compared to the other methods.

Pancreatic islets of animals and humans contains a large amounts of deposited insulin in the form of complex with zinc [1-4]. Method of isolation of pancreatic islets using of collagenase proposed by R. Lacy, M. Kostianovsky in 1967 [5] has obvious advantages due to the possibility for investigation of direct effect of various concentrations of the investigated substance on the β-cells contrary to the model of animal experiments.

Objective of the study: in experiments with the direct effect of diabetic chemicals on isolated pancreatic islets to investigate the nature of direct effect of the one diabetogenic derivatives of 8-hydroxyquinoline on the state of histostructure and insulin content in pancreatic β-cells, as well as of zinc ions involved in the formation of β-cells of the deposited form of insulin [2]. There are parallelism between the content of insulin and zinc in β-cells [3, 6-8]. It is known that some antimicrobial drugs widely used in clinical practice includes the following, containing 8-hydroxyquinoline derivatives as an active component of the some antimicrobial drugs. Its antimicrobial effect is determined by the ability of 8-hydroxyquinoline to form complex salts with metals, including zinc of the active part of bacterial enzymes which is accompanied by inactivation of enzymes and subsequent death of bacteria [7].

At the same time, the goal was to try to adapt the histochemical methods of staining insulin and zinc to the tissue model of isolated pancreatic islets in order to obtain high-quality results achieved when working with tissue sections of a fixed pancreas.

Isolation of pancreatic islets by collagenase according R. Lacy and M. Kostianovsky [5]. The pancreas tissue was disaggregated 3 times in 2 % collagenase solution (Boehringer Mannheim, Germany), washing in Hanks solution. Selection of isolated islets using of two ways: 1) separation in the density gradient of dextran; 2) manual selection. Pre-cultivation of the intact IA of control group for 1 h in RPMI-1640 nutria medium (SERVA, Germany) with 5.5 mM of glucose and of fetal serum. In experimental groups islets were exposed for 20 min. in RPMI-1640 medium with 3.5-3.8 mg/100 ml of 8-para(toluenesulphonylamino)- quinoline [TSQ] (IREA, Institute of Pure reagents, Moscow) and with Dithizon, 5.1-5.2 mg/100 ml. At the end of the exposure, islets were washed in Hanks solution after which — precultivation in fresh portion of RPMI-1640 medium. Fixation of islets in Bouin for 45-60 min.

Features of embedding of islets into paraffin. The main task was to prevent the islets from settling to the bottom of the container with paraffin, distributing them as evenly as possible vertically in the paraffin block. Staining of sections using of 2 methods for insulin: aldehyde fuchsine («MERCK», Germany) [9-11] and fluorescent N,N'-Diethylpseudoisocyanine chloride («SERVA», Germany) methods [12-14]. Staining of zinc by high specific histochemical luminescent reaction with 8-para(toluenesulfonylamino)quinoline (TSQ) was used [6, 15-17]. For this reaction islets were fixed in 70º ethanol + H2S was used which ensures the conservation and fixation of zinc ions in β-cells. The content of deposited insulin and zinc ions in β-cells was measured by histofluorimetric method in relative units (r.u.) using of dependence of zinc concentration on fluorescence intensity of β-cells by calculation of parameter K [18, 19]. Immunohistochemical method for staining of insulin [20] using standard kits («DAKO», Denmark) was also used.

Calculation of the parameter K for Diethylpseudoisocyanine and TSQ luminescent methods for insulin and zinc ions in β-cells: K = IF1/IF2, where IF1 is intensity of fluorescence of β-cells; IF2 is intensity of fluorescence of β-cells of damaged isolated pancreatic islets. The direct dependence was used in the calculation: more intensive fluorescence of cytoplasm of β-cells correspond to the higher content of insulin and zinc in β-cells [19]. Calculation of indicators for light optical microscopy (aldehyde fuchsin method): K = AB2/AB1, where AB1 is absorbance by β-cells of intact isolated pancreatic islets of rat rats; AB2 light absorbance by damaged β-cells. An inverse direct relationship was used: the higher light absorption (color density) correspond to a large amount of insulin whereas low absorbance correspond to the low content of insulin and zinc in β-cells. For the quantitative assessment a histofluorimetric complex based on a light microscope and microphotographic camera with integrated diaphragm for selective photometry of islet β-cells [18, 19]. All data were calculated statistically using t-Student test.

In sections of intact islets marked positive reaction for insulin and zinc in β-cells was demonstrated by all methods, the most demonstrative by using of N,N'-Diethylpseudoisocyanine and by aldehyde-fucshine methods for insulin correspondly: 1.74 ± 0.03 p.u. and 1.72 ± 0.04 as by immunohistochemical methods — 1.70 ± 0.05 p.u. and for zinc — as 1.68 ± 0.03 p.u. (see Table). In islets treated by Dithizon and by TSQ, a marked decrease of the content as of insulin and zinc in β-cells was showed in comparison with β-cells of intact islets (see Table). Intact islets without any changes of the state of histostructure (see Fig. a-d). In islets treated by TSQ a marked histological changes were revealed as destruction and death of cells, pycnosis of nuclei in combination with marked decrease of insulin and of zinc content in β-cells by all methods.

Results showed that derivatives of 8-oxyquinolin induced like Dithizon destruction and death of β-cells and a marked decrease of insulin and zinc content in β-cells, which is involved in the formation of the deposited form of insulin in β-cells. The indicated changes were pointedly identified using of the all used histochemical methods (see Fig.). Meanwhile, we noted a reduced insulin content in β-cells of neonatal rats in compared with adult animal cells [18], which can be explained by the insufficient accumulation of hormone in ß-cells by the 4-5-day neonatal period. Regarding the characteristics of individual methods, it makes sense to note the following. The widely used immunohistochemical method of staining insulin is high specific. Meanwhile this method is not very suitable for studying the state of the histostructure. The aldehyde fuchsin staining method has advantage over immunohistochemical technic regarding possibilities to investigate state of histostructure and of histotopography of deposited insulin in islets. Using additional staining by Halmi mixture, one can describe in detail the nature of the histological changes in the islets including state of α-cells, which significantly increases the value of obtained results. A relative disadvantage of the 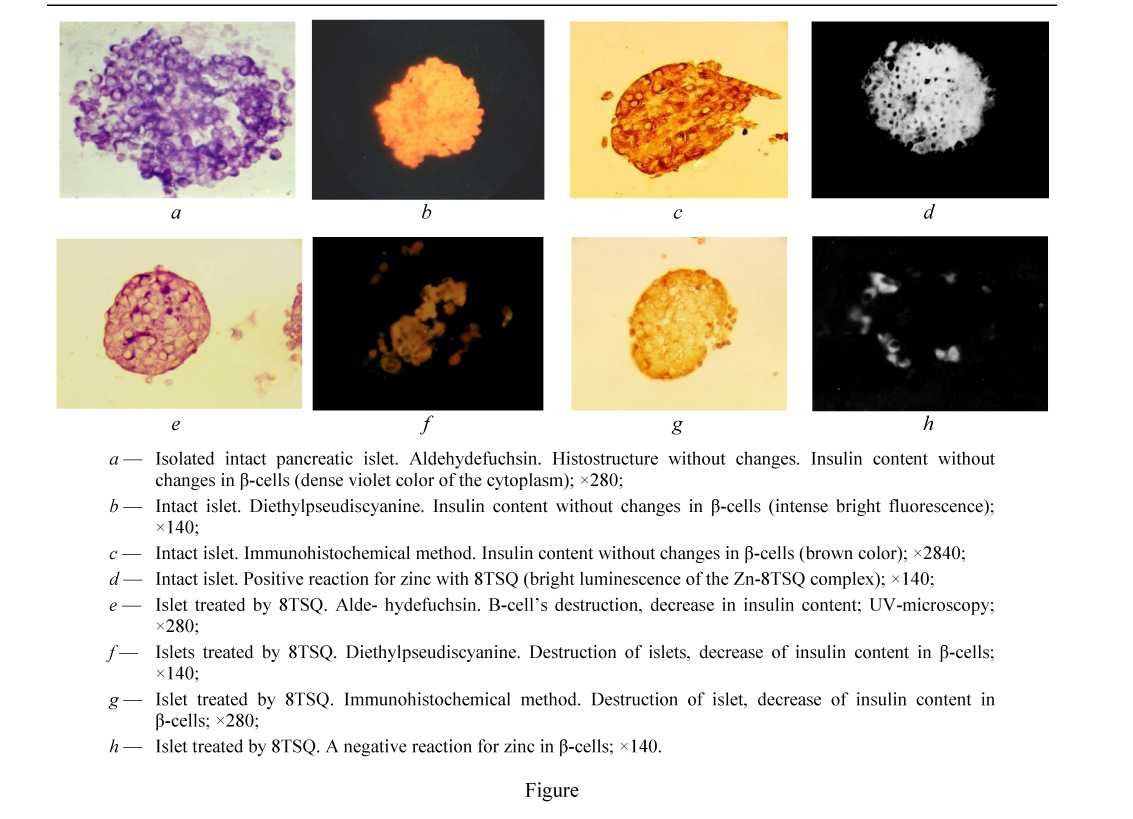 aldehyde-fuchsin method is that it is not strictly specific only with respect to insulin, since some hormones of the adenohypophysis are also stained with it. However, in relation to pancreatic islets, it can surely be considered specific, since other hormones are not produced in β-cells and only insulin can stain. As for the N,N'-diethylpseudoisocyanine staining method, it is strictly specific for staining of insulin and highly sensitive, allowing, like the luminescent reaction to zinc to detect substances at concentrations of 10-7-10-8 [1, 12, 17]. A relative disadvantage of luminescent methods is the use of intermittent slides prepared ex tempore, which dry quickly enough after painting. Based on all the many years of previous experience, the authors believe that is more preferable for this kind of research to use a pair of methods, for example, aldehyde fuchsin and N,N'-diethylpseudoisocyanine or immunohistochemical technic. In the possibility to use only one staining method — the choice of the aldehyde fuchsin method is no doubt. Regarding selection of islets, authors prefer results obtained by careful manual selection of purified islets in which it is possible to have a culture containing no more than 1-3 % of the islets damaged during procedures of isolation, while when selection using a density gradient, their number can reach 8-15 % [5]. The use of such an insufficiently purified culture can significantly distort the results of the study.