The features of «productive» function of the state as economic subject

In article are considered features of «productive» function of the state as economic subject. Need and expediency of the state production of the net public benefits is most obvious. Not excludability is absolutely insuperable to them, and obviously there is no opportunity to replace expenses of the state coercion, if they are rather high, expenses on creation of a market mechanism of restriction of access to this benefit for «hare». When consumption is absolutely noncompetitive, price quotation of public goods or service in Pareto principle is inefficient as consumption of additional unit of the benefit brings benefit to the consumer without any expenses. Price quotation will reduce consumption, having caused under exploitation of the public benefits and a dead loss of usefulness. When the supply of net public goods through the market is possible, it won't provide achievement of the best (optimum) level of production. Result of research of authors is detection of features of «productive» function of the state on the example of the Republic of Kazakhstan, and also the problems which arose recently connected with the researched subject.

Statement of a problem. The condition and dynamics of the sphere of production as initial stage of a reproduction cycle predetermines proportions and development of its other phases. It demands active economic participation of the state in this sphere, in particular, through realization of a «productive» component of production function.

Analysis of the last researches and publications

The theoretical bases of analysis of production of the public benefits was laid within the neoclassical theory of welfare. Theoretical bases of production of the public benefits and positive outer effects were created in works of representatives of the theory of welfare, such as N.Kaldor, E. Lindal, A. Marshall, V. Pareto, A. Pigou, P. Samuelson, T. Scitovsky, J. Hicks, H. Hotelling.

Many theoretical and practical questions of the public benefits, including problem of increase of efficiency of their production is one of the most perspective directions of modern economic science as many theoretical and applied aspects didn't gain due development yet. In particular, in case of all importance of the conducted researches there is no constructive classification of the public benefits. The theoretical and practical importance of studying of these problems, need of application of new approaches also determined a choice of a subject of research, the purposes and tasks of work.

Contrary to it for net public goods

The net public benefit and the net private benefit are extreme points of a scale of the economic benefits. Between them there are much more often the mixed different benefits meeting in reality which proximity to this or that pole is defined by prevalence of properties of private or public goods. The mixed public benefit unlike pure is the excluded benefit of joint consumption with selectivity. alternativeness of its use. with decrease of its consumption.

The following group of the public benefits is also possible taking into account a set of the corresponding parameters (Table 1).

Specifics of the public benefits (pure and mixed) consist in the following: the external effect has impact not only on the direct participants of activity connected with this benefit. but also extends on foreign faces. generating a so-called problem of «free rider». The market mechanism effectively works to the economic benefits only on condition that their external effect can be controlled by participants of the transaction connected with this benefit.

In a situation with the public benefits ways and methods of internalization of external effects. solutions of the problem of «free riders» are defined by the volume and intensity of external influence. its positive or negative character. possibility of divisibility of these or those public benefits. degree of their excludability and alternativeness in consumption. and also possibility of quantitative change of an external effect. If scales of external effect are insignificant and a circle of subjects is small. and production of this public benefit and its collateral external action can be taken without participation of the state under control by direct participants of the economic transaction or self-governed public organization. If the problem of «hare» gains wide scope. systematic underproduction of the public benefits is formed. and there is a situation at which delivery of the benefit has to be carried out by the state.

Providing adequate output of the pure public benefits possibly only at public and obligatory approach to formation of funds for their creation by means of the compulsory state taxation. At domination of free business the market economy isn't democratic. The state independently defines standard item of the public benefits and appoints taxes. without reckoning with. whether individuals want to have these goods and services in such quantities or not. Therefore it is necessary to aspire that all pure public benefits delivered to the individual. corresponded to his compelled contribution.

Problem in that: the state has to define output of the pure public benefits. and also quantitative range of the specific taxpayers bringing means for consumption. «Therefore the political mechanism steps on the stage as substitute of the market and determinant of the directions of action of the state coercion» [3].

Taxpayers at the same time are also voters; the effective instrument of tax regulation of production of the pure public benefits is the electoral system by means of which society expresses the preferences to elected representatives in authorities depending on their positions. Decision-making by vote replaces detection of preferences through a market mechanism that is the public choice in public sector carries out a certain selfcorrecting function. as a consumer choice – in the private sector. The self-correcting effect of a public choice of subjects is stronger. than the level of development of political democracy is higher. Then at the certain individual is reduced the gap distance between its role of the taxpayer and a role of the consumer of the net public benefit. 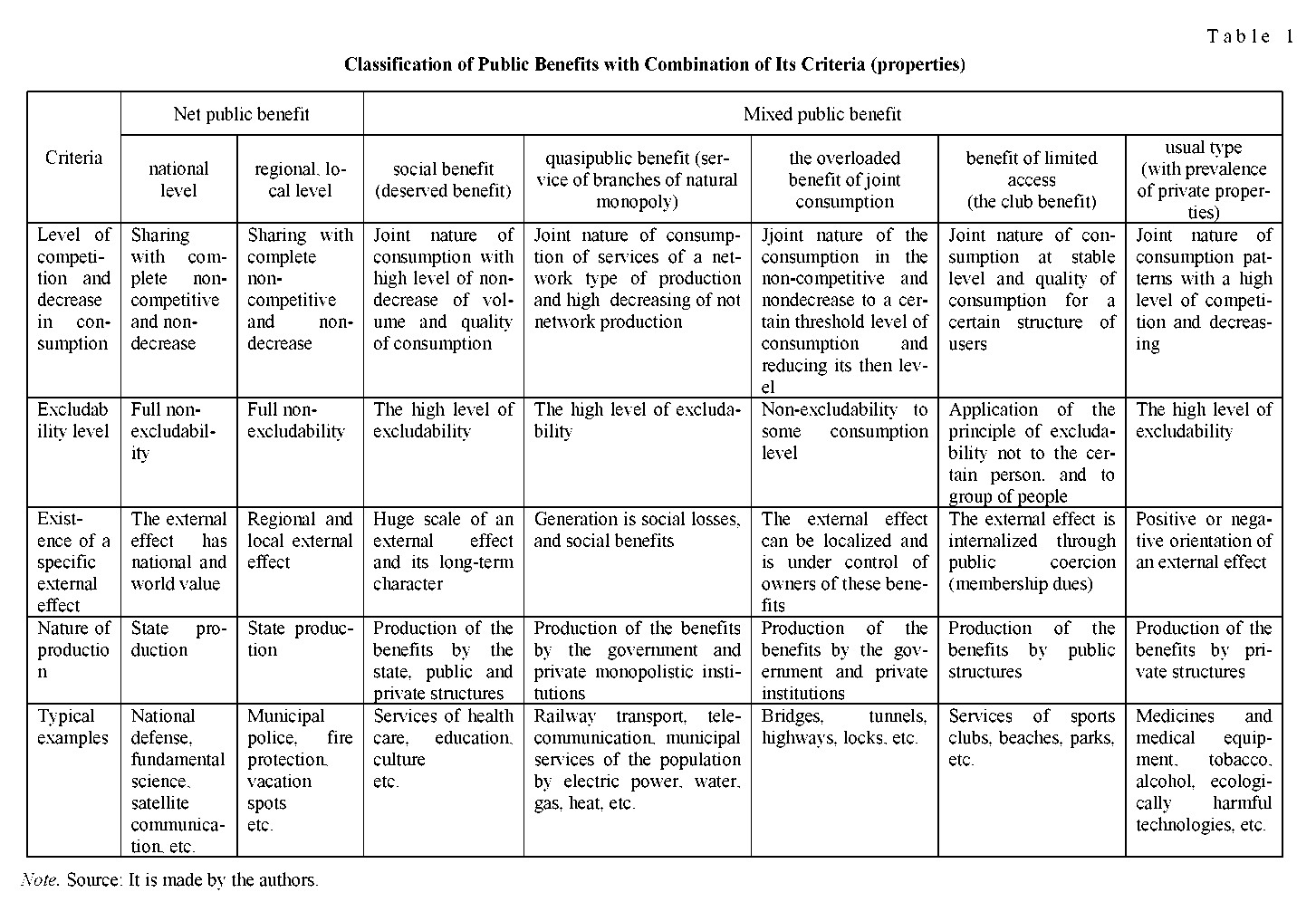 The market mechanism isn't capable to function effectively in the sphere of production of the mixed public benefits, as socially significant benefit (the deserved benefit) and the quasi public benefit.

Socially significant benefit synthesizes properties of the private excluded benefit and property of the public benefit through considerable positive external effect. Such benefits consist from education, health care, culture, services of other branches of the welfare sphere.

The specific nature of the deserved benefit, multi composite character of an external effect, long term of its influence and lack of accurate contours of influence create an objective basis for emergence of contradictions between the current individual and long-term public preferences in consumption of such benefits. It is necessary a certain state intervention for permission of this collision in favor of public preferences and introduction of obligation of consumption of socially significant goods and services. Otherwise at freedom of a consumer choice there are no guarantees that citizens won't prefer to spend funds for the current consumption, but they don't spend funds for the deserved benefits [4].

The most serious insolvency of the market causing emergence of the state production of the mixed benefits arises when the markets aren't competitive. The main reason acts existence of growing economy at production scales. In this situation economic efficiency demands limited number of producers. The branch in which economy growth at scales is so considerable, functions only one firm, is natural monopoly.

The benefits made in branches of natural monopoly, are the quasi public benefits. In the excluded benefits of joint consumption there are more than properties of private goods and much less characteristic properties of the public benefit. Specifics of these branches are in large scale of production and a considerable capital intensity that makes high demands of the volume of the initial capital for the accession to these branches of new competitors. The characteristic transmission of technologies for branches of natural monopoly (network type of production) excludes infrastructure duplication on providing the population with this production, doing technically impossible existence of the competitive environment.

The state intervention to the sphere of production of the quasi public benefits consists that private firms pursue the aim of maximizing own profit, instead of welfare of the nation that conducts to inefficient distribution of resources. The state chooses one of two possible options of behavior without having opportunity to eliminate zones of natural monopoly without efficiency loss: or to fill these zones with the enterprises of public sector, or to use measures of indirect regulation of activity of the monopolist [5].

The state, functioning as the producer in the natural and monopoly environment, is guided by other principles of managing, than private firms. It allows to use the sphere of the state delivered quasi public benefits for the solution of strategic economic tasks, increases of profitability of private enterprise. The monopoly profit isn't the paramount purpose of activity of the state as producer of the quasi public benefits. It became the supplier of cheap services (in particular, transport, post and cable), energy resources (coal -, gas -, oil production, electricity generation), reducing expenditures in the private sector.

If scales of external effect are insignificant also the range of market agents is small, other kinds of the mixed public benefits it isn't required direct state intervention. Collateral external influence can be without state participation, is internalized by self-governed public organization or direct participants of the transaction on mixed the benefits.

Approximate idea of the high possible scales of implementation by the state of direct productive function can be received on the basis of data on specific expenditures on production of the public benefits in gross domestic product of the developed countries given in Table 2.

For the Kazakhstan economy are characteristic the same tendencies concerning the directions of realization by the state of direct productive function, as for the countries with normally functioning mixed economy (it is visible from Table 3).

Table 3 Dynamics of Expenditures of the State Budget of the Republic of Kazakhstan, in 2010-2016, billion tenge

In all countries the public sector is a dual, inconsistent institutional formation. It personifies two beginnings: the market - based on equivalence of an exchange, onerousness, property right alienation, purchase and sale, and non-market - based on nonequivalence, gratuitousness, the uncertain specification of the property rights, non-market mechanisms of distribution of resources. The duality of the economic nature of public sector is a source of inefficient use of economic resources. This dualism in production of the public benefits causes the necessity of effective legislative regulation of this sector for the purpose of providing conditions for rationalization of use of economic resources in creation of such benefits.

The state carries out productive function in the pure and mediated forms. Dominating economic effect in its realization is direct production of net public, socially significant, quasi public and private benefits within public sector of economy.