The implementation features of the personnel policy principles in public administration

In Kazakhstan, with the beginning of the course «Five institutional reforms» announced by the head of state, there are involving fundamental changes in the political and public life of the state; the national Plan «100 concrete steps to implement five institutional reforms» [1]. One of the five institutional reforms of the plan of Nations is the formation of a professional state apparatus. At the same time, priority is given to the formation of a modern, professional and Autonomous state apparatus, within the framework of which the tasks of modernization of the procedure for entering the civil service, career advancement of civil servants, the introduction of remuneration for the results are set. The basis for the implementation of the new career model of public service was the adoption of the new Law «on public service» of the Republic of Kazakhstan, which was put into effect on January 1, 2016.

Currently, the basics of personnel policy in the system of state bodies are laid in the Law of November 23, 2015 № 416-V «on public service of the Republic of Kazakhstan», which regulates public relations related to entering the public service of the Republic of Kazakhstan, its passage, termination, determines the legal status, material security and social protection of civil servants, as well as issues of other persons ' activities in state bodies [2].

The formation of the Republic of Kazakhstan as a democratic, legal and social state is impossible without an effective state apparatus, the basis of which is the training of civil servants, focused on ensuring high efficiency, competence and integrity of the work of state bodies. The new career model of the civil service is based on the principles of meritocracy, personal merits and achievements, and competence approach.

One of the distinguishing features of the modern stage of economic development is that human resource becomes an important competitive advantage, which is part of the key factors along with Finance and information technology. Regardless of how good the management staff of the enterprise is, the performance of the main work falls on the shoulders of ordinary employees. Therefore, it is important to increase attention to the development of personnel management, which is facilitated by the introduction of a new career model. Personnel policy is a long-term line of human resources development, personnel development, a certain prospect of economic, political and cultural development of the society. In this regard, the study of personnel policy problems is complex both in theoretical and practical aspects of the problems. Of particular relevance is the study of the elements of improvement of state personnel policy, which should meet the public's needs and level of current knowledge.

Personnel policy is an important tool in achieving the strategic goals and objectives of socio-economic and political modernization of the country. Further functioning of an effective system of state bodies depends on the process of formation, use and improvement of personnel.

State personnel policy, regardless of the situation and possible adjustments to the number of its main goals include:

Consequently, the personnel policy in the public service implements the personnel strategy, which consists of the search, evaluation, selection, professional development of personnel, certification, as well as motivation and incentives aimed at fulfilling the functions of state bodies.

The assessment of the effectiveness of personnel management is based, first of all, on information about employees: promotion, their professional, qualification, age and sex characteristics, medical and psychological parameters, productivity and innovative activity. Thus, in order to improve the efficiency of public personnel management, it is crucial to improve the working conditions, making it necessary to firstly define methods or mechanisms for this improvement.

Considering the theoretical aspect of the methods to improve the efficiency of staff, in many ways they are classified into the following methods:

Undoubtedly, the presented list of methods to improve the efficiency of personnel management is applicable not only to manufacturing companies, but also to the public authority. Thus, certain methods are reflected in the system of public administration, aimed at skills and competencies.

Despite the fact that in our country there is a reform of public authorities and management, major changes in labor legislation, etc., modern personnel policy cannot ensure the involvement of such people in the authorities, which would fully meet modern socio-political and economic requirements. The development of an effective system of personnel work is the most important task of the state. All this makes it important to study personnel policy and ways of its implementation in public administration.

It is possible to distinguish the following main tendencies of development of personnel policy of the state organizations:

The implementation of the above-mentioned main trends in the development of personnel policy is aimed at achieving its goal. Meanwhile, the functioning of the personnel policy system is based on the fundamental principles.

Despite the fact that the implementation of the principles of public service in the Republic of Kazakhstan is associated with many problems, they serve as a good basis for the development of personnel policy, rules and regulations. They should be taken into account in the development of specific concepts and mechanisms for the implementation of human resources policies.

The establishment of political party organizations is prohibited in state bodies. Civil servants in the exercise of their official powers are guided by the requirements of the legislation of the Republic of Kazakhstan and are not associated with the decisions of political parties, public associations and their bodies.

There are different interpretations of the principles of personnel policy in public administration (Table).

The principles proposed by A.P. Egorshin [4] are aimed at different stages of the formation of the personnel system, and takes into account the structure and the degree of direction of the organization and changes in General. 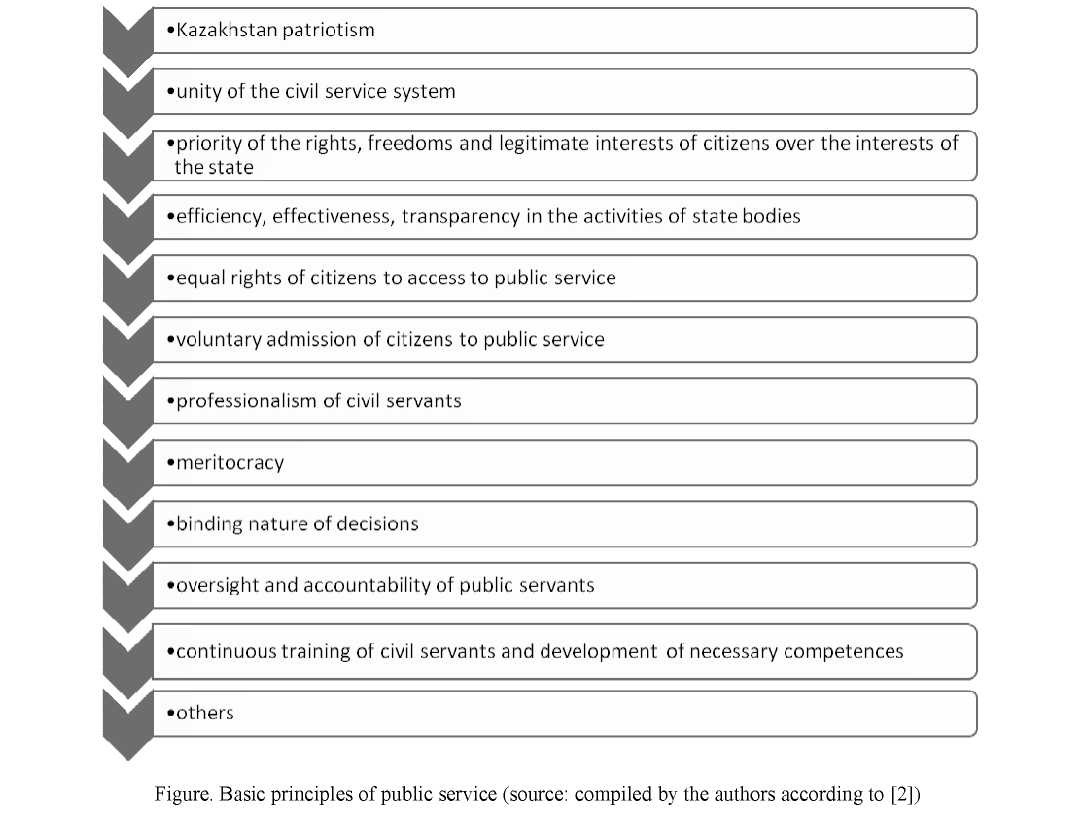 In the development of personnel policy, the principles as the basic rules of activity that regulate the work with personnel are of great importance. According to L.V. Vagina, certain requirements of personnel policy were formed in relation to the sphere of public service [6]:

But they have not yet found their proper implementation in practice.

We can note attempts to highlight the new constellation of principles that would take into account the realities of life and specify updated requirements for personnel in the public service. As V.G. Prokopiev notes, an effective innovative mechanism for the implementation of personnel policy corresponds with the following principles [7]:

According to A.E. Kulzhambekova and G.K. Suleimenova [8] the set of principles of personnel work can be divided into two groups: universal and special. Universal principles (scientific validity, legality, transparency, quality orientation, democracy, continuity, the tradition, de-bureaucratization) are determined by the essence of the whole system of personnel work, they are inherent to human resources activities in any field of public life. Special principles (professionalization and moral orientation of public servants, social security of public servants, operational control) regulate the work not of the entire organization, but of personnel management services of public authorities.

The implementation of the principles of personnel policy in the activities of public authorities have not received due consideration in real life. This is due to many reasons, especially the peculiarities of modern society as a whole, which has not yet gained a clear value-semantic orientation. Accordingly, the people who develop and implement personnel policy do not have a single identification core that would allow them both to clearly formulate the values and principles of personnel policy, and to adhere to these requirements in practice. Inconsistency is observed at the level of implementation of any of the above principles. So, the principle of professionalism of the state officials require accounting specialists in public administration level of training, knowledge, skills, abilities to set goals and find solutions, to organize and participate in joint activities of organizations, etc. But it is clear that the level of education possessed by the majority of workers, especially in regional and municipal services, the implementation of this principle is fraught with considerable problems. The principle of meritocracy is the recognition of the personal merits and achievements of the civil servant, his promotion in the public service in accordance with the abilities and training. As for the principle of transparency, which should give personnel work openness and transparency, it is still implemented to some extent in the procedures of competitive selection and certification of personnel, but this cannot be said about other aspects of personnel work. The most problematic is the implementation of the principle of control and accountability of personnel, especially in relation to those aspects of the activities that are associated with the interaction of civil servants with business representatives. Today, there are attempts by the authorities to improve this situation, but it is clear that this will require great efforts not only by the authorities themselves, but also by other public institutions, as well as by the citizens themselves.