Trade cooperation between Kazakhstan and Germany

TRADE takes on the task of balancing spatial, temporal, qualitative and quantitative tensions between production and consumption. It is the act or process of buying, selling, or exchanging commodities, at either wholesale or retail, within a country or between countries. It is possible to differentiate between retail, wholesale and specialist retail companies. The form of retail trade includes the department store, specialty store, chain store, mail order, supermarket and hypermarket. The wholesale business supplies retailers in a variety of forms, depending on the range planning [1].

COOPERATION -a collaboration of different intensity, duration and direction between legally independent companies. Cooperation partners can include both competitors, i.e. companies of the same economic level as well as companies of another economic level [2].

So what is TRADE COOPERATION at all? Trade cooperation is any voluntary, contractual cooperation between legally and economically independent enterprises for the purpose of improving their performance. Cooperation as harmonization of interests in subareas of company activity is confronted with the concentration, with which one calls the union of enterprises with abandonment of the legal independence of a partner [3]. The cooperation always means coordinated market behavior and thus contains antitrust elements. The cooperation provides the cooperation partners with an opportunity to jointly achieve their target quality level better than with isolated activity. The coordination or merging of operational activities takes place while maintaining the legal independence of the cooperation partners.

Furthermore Germany maintains an embassy in Astana and a Consulate General in Almaty. A honorary consul operates in Atyrau. Kazakhstan has an embassy in Berlin with a field office in Bonn and a Consulate General in Frankfurt am Main. Honorary consuls reside in Bremen, Dresden, Hamburg, Hanover, Wolfratshausen near Munich and Stuttgart. Additionally there is a German-Kazakh university in Almaty.

But what about the economic relations?

There are the following organizations and institutions that make up the German-Kazakh cooperation.

First the Kazakh-German Intergovernmental Working Group on Business and Trade (IWG).The Intergovernmental Working Group on Business and Trade is an official institution between Kazakhstan and Germany, which is responsible for the establishment of broad cooperation between the two countries in the economic, industrial, trade, technologies, innovations, energy, renewable energy, health economics, vocational training area and others. Under the leadership of the German Federal Ministry for Economic Affairs and Energy and the Kazakh Ministry of Investment and Development, the IWG meets once a year and discusses the framework conditions for the economic engagement of German companies in Kazakhstan and Kazakh companies in Germany. This year the IWG meeting took place on July 13, 2017 in Astana.

Furthermore, since the 1st of October 2010there exists the German-Kazakh Economic Council for Strategic Cooperation. It is supported by banks and companies. The business council wants to pick up on business opportunities and bring concrete projects on the way. Meetings are held twice a year, alternately in Kazakhstan and Germany [2].

Economic relations between Kazakhstan and Germany. The industrial production in Kazakhstan (Fig. 1).

Despite industrialization efforts, industrial production in Kazakhstan has increased only slowly in recent years and in 2015 even dropped by 1.6 percent. For the first seven months of 2016, the statistical office reports a further decline of 1.4 percent.

In Figure 2 is shown the industrial production of the main sectors, the real change in relation to the previous year, stated in %. The sectors chosen for the statistic are the following: Production and distribution of electricity and gas, Mining and quarrying and the last one the Manufacturing industry.

The reason for the decline in industrial production in 2015 and in the first seven months of 2016 is lower production in the extractive and electricity sectors. The manufacturing industry is stagnating [4].

Due to the fact that there is a decline in the manufacturing industry in Kazakhstan, the country depends on imports of processed goods like e.g. food, beverages, petroleum products, building materials, metal goods, chemical goods, etc., in this case also on imports from Germany.

Figure 3 above shows us the oversea trade of Kazakhstan from 2012 to 2016, stated in billions of dollars. Due to the fact that the sum of the exports is larger than the sum of the imports, we can conclude a positive trade balance of the RK.

However, there are strong differences between the numbers reported by the Kazakh statistical office and the information provided by the German Federal Statistical Office. This refers mainly to Kazakh exports to Germany. Behind the discrepancy are the differently registered oil exports in Kazakhstan, which are registered mostly as exports to other buyer countries, but are also intended for end users in Germany [5].

If we now compare Figure 3 and Figure 5, we get the following facts: In 2016, total exports from Kazakhstan amounted to 16,79 bn. $. Of this amount 0,2 bn. $ of the Kazakh exports were directed to Germany. Total Kazakh imports amounted to 11,25 bn. $ in 2016 and of this amount 0,8 bn. $ of imports directed Kazakhstan. To get a better overview, we are going to look more detailed on the trading partners of both countries and their importance.

From the perspective of Kazakhstan

Trade cooperation between Kazakhstan and Germany 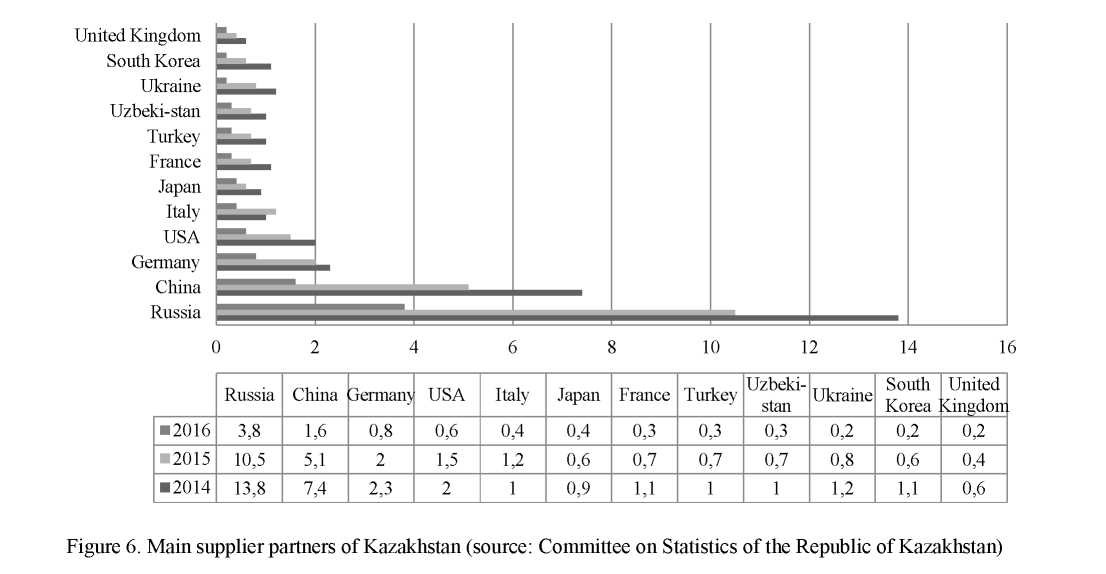 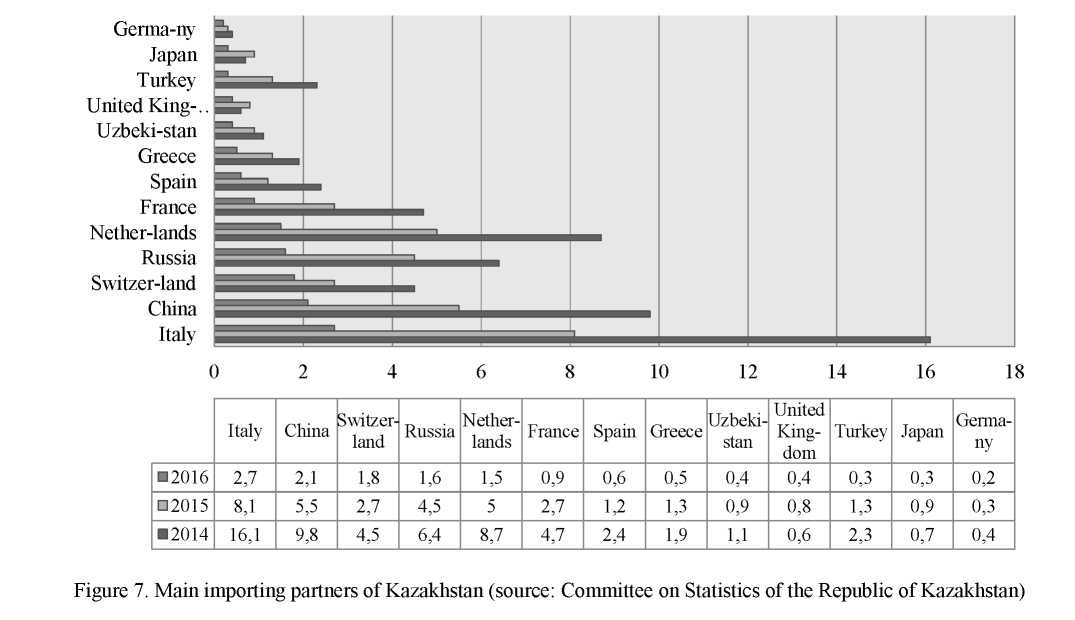 Table 1 Ranking of trading partners in foreign trade of the Federal Republic of Germany, 2016

According to the Federal Statistical Office of Germany, Kazakhstan took 66th place in the ranking of the importing partners of Germany with an amount of 1,082 bn. $ in 2016 followed by the Republic of Macedonia and Peru (Table 1).

Table 2 Ranking of trading partners in foreign trade of the Federal Republic of Germany, 2016

Kazakhstan continues to be by far the most important trading partner in Central Asia for Germany, even though the weak economy in particular has recently restricted the supply from German companies to Kazakhstan. However, the situation has stabilized towards the end of 2016, and a clear increase has again beenrecorded in the first two months of 2017: if bilateral trade volumes declined again slightly in 2016 by 2.1 % to 3.98 billion Euros, exports rose after a decline of almost 13 % in the first two months of 2017 by 31 % and imports even by 58 % after only slight growth of 2.7 % in 2016 [6].

German supplies mainly include equipment and technology (including mining, energy, motor vehicles, agricultural machinery, medical technology). Kazakh deliveries, which consist mainly of oil (Kazakhstan is the fourth largest oil supplier in Germany) and raw materials, recorded only a slight decline, but have been lower in recent years due to the fall in the price of oil.Much of the foreign direct investment in Kazakhstan continues to go into geological exploration of raw materials and oil and gas production. As a result, Germany is currently ranked 11th in direct investment, with an inflow of $ 250 million in 2016, and currently ranked 19th with a portfolio of $ 418 million. The last major investments of German companies in Kazakhstan were mainly in the building materials sector ( Companies HeidelbergCement and Knauf) and in wholesale (Metro AG) [7].

In the summer of 2010, the first visit by German Chancellor Angela Merkel took place in Kazakhstan. Kazakhstan's authoritarian President NursultanNazarbayev called it ’historical’. At the meeting, Germany and Kazakhstan agreed to do business with an investment volume of 2.2 billion Euros. Germany is a key partner for Kazakhstan in Europe. Merkel described the investment agreements as a good starting point and praised Kazakhstan as Germany's most important economic partner in Central Asia. «Importing (...) oil from Kazakhstan has become increasingly important to us, and Kazakhstan is now the fourth most important supplier of crude oil for Germany» [8]. The German economy is certainly interested in the areas of energy efficiency, telecommunications, construction, mechanical engineering and agriculture, Merkel said. But: «The most important requirement for a greater engagement in Kazakhstan are reliable framework conditions and a solid basis of mutual trust. «The Chancellor emphasized: «We want to look to the future (...)». Kazakhstan is also beyond the economic relations a friend and important partner for Germany [9]. So in conclusion, it may be said that if the economic relations between Kazakhstan and Germany will continue to develop in the same way,a promising future awaits the cooperation.