Innovative Activity as a Condition for Effective Use of Intellectual Potential

The emergence of a global innovation and technological space has determined the modern state economic policy of the Republic of Kazakhstan, aimed at achieving sustainable dynamic development of the country via diversification of economic sectors and waste from the raw materials development trend. In this context, the intensification of innovative activity in enterprises has been mainstreamed that led to the motivation of the formation of the intellectual potential corresponding to the pace and level of innovation. The article provides a descriptive characteristic of the situation in the country concerning the development of innovation activism. Even though the financial crisis has affected almost all of the industrial enterprises, Kazakhstan today has a weak activity in the creation and dissemination of innovations. According to the Statistics Agency of the Republic of Kazakhstan, the share of innovation-active enterprises in the republic was 9.6 % of the total number of respondents. These data lead to the idea that, despite the adoption of state programs that should motivate the innovative activity of the country, unfortunately there are no major changes in this direction.

Sovereign Kazakhstan has demonstrated impressive patterns of the emergence of a new state, public stability of internal harmony and a steady development of the economy and political system. This is an incontestable fact confirming the scientific accuracy, foresight and the continued success of the President's political course, which is supported by all the citizens of Kazakhstan.

The idea of forming an intellectual nation in Kazakhstan is among the most fundamental system initiatives of the Head of our state. Therefore, the national interests of the country suggest that there is a need

The emergence of a post-industrial technological order in the first half of the XXI century in the context of the formation of a global innovation and technological space has determined the modern state economic policy of the Republic of Kazakhstan aimed at achieving sustainable dynamic development of the country through diversification of economic sectors and retreat from the raw materials development. The production of competitive and export-oriented goods — jobs and services in the manufacturing industry and services — is the main subject of the state industrial innovation policy.

These data lead to the idea that, despite the adoption of state programs that should motivate the innovative activity of the country, unfortunately, there are no major changes in this direction. Presumably the dynamics of the country's development (with shadow market, 40 % of the economy [3], 122nd position in the Corruption Perceptions Index out of 180 countries, with an index of 31 points out of 100) [4] implies such level of activity. In general, by the end of the XX century, it became obvious that the level of innovation activity and the development of the scientific and technical sphere — science, education, high-tech industries, world technology markets — defines the boundaries not only between rich and poor countries, but also regions within one state, creates the basis of a dynamic economic growth and is a major factor in the formation of centers of power. Without the use of innovations, it is almost impossible to create competitive products with a high degree of knowledge-intensiveness and novelty.

Thus, innovations are an effective means of competition, since they lead to the creation of new needs, to a reduction in the cost of production, to an influx of investments, to an increase in the image of a producer of new products, to the opening and capture of new markets, including external ones.

There is a heterogeneity of innovation development of the regions of Kazakhstan. It is general knowledge that the level of innovativeness of a region is formed as a result of the interaction of many factors. It is generally accepted that the whole diversity of factors affecting the formation of an innovative environment can be reduced to four groups: the socio-economic conditions for the development of a region; innovation potential; human capital; management capacity [5]. It would seem that such areas as Mangystau, Atyrau, West Kazakhstan, that are included in the Industrialization Map of the country should update the solution of this issue. However, innovation activity is not very high there, and this does not motivate strengthening of intellectual potential. The ratio of innovation activity on the use of new equipment and technologies across the regions of the republic is also heterogeneous.

The data in Figure 3 demonstrate the fact that the highest applicability of new technologies in Almaty is 103 units, despite the fact that the level of innovation activity is two times lower than in Astana and in the East Kazakhstan. This is explained by the fact that new projects are being implemented as part of the EXPO-2017 heritage and the city initiative «50 Projects — Development Drivers for Almaty». All of them not only attract the latest innovation technologies and create new jobs, but also allow further reduction of the environmental burden on the city's environment.

The Kazakh-German company «FalconEuroBus» is building a fleet of vehicles and a plant for the production of third generation electric buses. The volume of private investment in the project is about 15 billion KZT [6]. 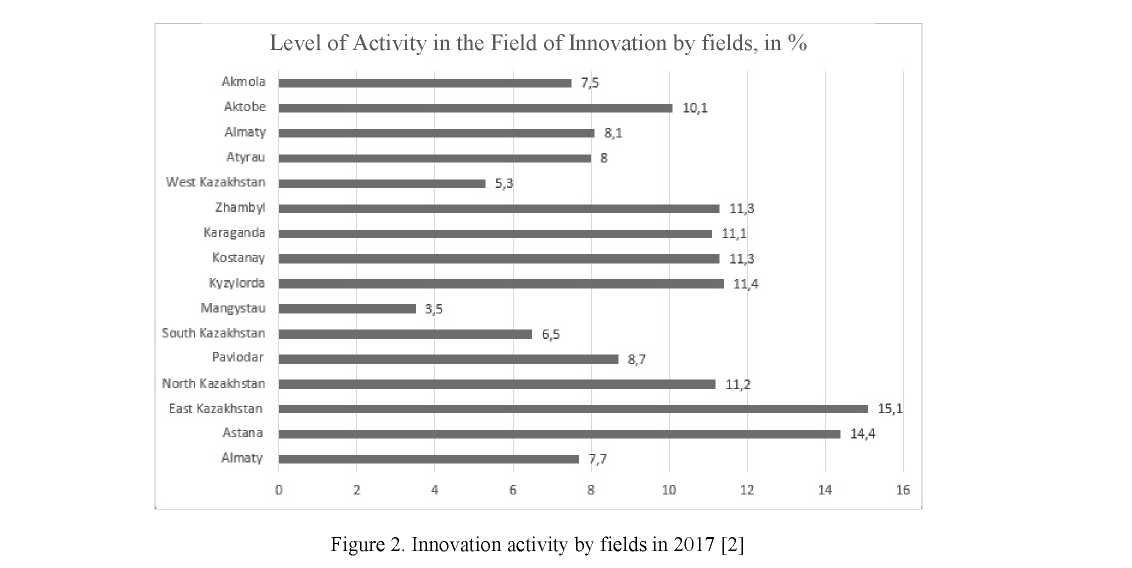 There is a plan to create six production sectors in accordance with the priorities defined by the state program of industrial-innovative development in Almaty: food industry, engineering, construction industry, pharmaceutical industry, chemical industry, and light industry. The active phase of work on the implementation of projects that have received permission for placement has already begun. When selecting projects, priority is given to innovative, environmentally friendly industries, as well as traditional industries. Currently, 33 projects with a budget of 176, 9 billion KZT have been authorized. As the planned facilities are commissioned, it is planned to create almost five thousand jobs. At the same time, 19 projects are included in the Almaty Business Support Map [6].

billion KZT with the creation of 307 jobs — LLP «Rudny Cement Plant» — «Construction of a Cement Plant in Rudny». In addition, in 2018 it is planned to implement 6 more investment projects with a total investment of 10.3 billion KZT and the creation of about 500 jobs. A part of these projects will be included in the Support Map during the next update. Since the beginning of the implementation of the Program, the projects introduced have manufactured products worth 546.1 billion KZT, including 41.1 billion KZT in January-April of 2018 [7]. In Kostanay region there are the following trends in the formation of the intellectual potential of the region. The number of people involved in research and development in 2004 was 71 people, and in 2017 the figure increased to 569 people, which demonstrates a steady trend and conditions for the formation of high-quality intellectual potential of the region.

These regions have all grounds available for the formation of an innovative economy, which cannot be said about other regions of the country. In addition, there are problems with the quality of human capital, especially among young people. The NEET index (this is the index for the proportion of young people without education, work and vocational training) for the largest cities of the country is as follows: Almaty — %, Astana — 12.5 %, Shymkent — 14.13 %, Aktobe — 17.79 % [7]. What is wrong with our youth who are the basis of human capital formation? In 2016, there were 313600 school graduates, of whom just under 40 % go to colleges, 29 % go to universities, 11 % go to study abroad, and 25 % remain without going on further study. These 25 % of graduates annually join the ranks of the NEET, and some of them take on low-paid non-qualified jobs. The NEET potential of 20 % of the annual school output forms a high total in-

dex of 37 % [8]. It follows from this that the quantitative potential in human resources decreases, which could have formed the intellectual potential for the innovation economy.

Regions that have all clearly traced directions of innovation development claim that there are certain conditions for the formation of an innovative economy and its intellectual potential.

In general, the degree of innovation attractiveness of regions can be assessed by the following indicators:

Investments in research and development, internal R & D in the regions of Kazakhstan for 10 years increased only in 1.98 times [2]. This reflects a low activation of investments in research and development in the region. In this sphere Almaty city with the developed infrastructure of science is the leader of the country. The adoption of the State program of industrial-innovative development of Kazakhstan, also stepped up work in this direction. The requirements of publications in scientific journals with high impact factor also influenced the development of science within organizations.

However, the figure 4 depicts that 28 187 599.8 thousand tenge invested by scholars from their own funds are almost the same as from the government expenditure, do not motivate scientists, due to the fact that wages of the scholars stay at the same low level. There is no opportunities for them to invest in their own projects, and therefore the priorities outlined by the Head of State in his Address to the Nation are impressive and gives a momentum for the development of innovative sciences. The Head of State emphasized that within 5 years it is necessary to bring governmental expenditures on education, science and healthcare from all sources to 10 % of GDP [1]. Unfortunately, it is too early to talk about high-tech production and overall development of science, as in the OECD countries. The study of foreign experience shows that in no country in the world the innovation system formed by the private sector on its own. In order to enhance the competitiveness of the national economy, the state plays a leading role on the foundation of systematic approach in creating an innovative economy with a focus on community.

In developing countries, manufacturing industry is the main mean of development; it helps to turn poor countries into important players in the global economy.

Thus, it can be summarized that the existing problems in the development of an innovative economy, restrain not only innovation activity in the country and in its regions, but also reduce the motivation in the formation of intellectual potential.