The article deals with the use of content and language integrated learning in with students of the economic faculty. Content and language integrated learning (CLIL) is an increasingly popular pedagogical approach that evolved in response to the recognized need for multilingual competence in Europe. However, despite its extensive reputation, CLIL has not yet reached a fully developed educational model. In this article, the authors analyzed the key results of one of the first large-scale multi-dimensional evaluation projects of CLIL. The authors briefly presented the CLIL method and its use, highlighted some necessary competences in the modern globalized world. The article outlines the conditions for hard CLIL and soft CLIL. Also, the article specifies the specifics of CLIL, possible advantages and disadvantages. Competence and educational requirements for teachers are also mentioned. The article contains a sample lesson. In conclusion, the authors emphasize effective learning outcomes using the CLIL method.

CLIL (Content and Language Integrated Learning) ‘is a term created in 1994 by David Marsh and Anne Maljers as a methodology similar to [but distinct from] language immersion and content-based instruction. It's an approach for learning content through an additional language (foreign or second), thus teaching both the subject and the language. The idea of its proponents was to create an «umbrella term» which encompasses different forms of using language as a medium of instruction. CLIL is a new didactic approach to teaching subjects integrating two features – linguistic and factual. There are two kinds of CLIL: the so- called hard CLIL and soft CLIL methods. Hard CLIL means that the subject or subject curriculum is taught in a foreign language. However, the main lesson objective is the content objective, not the language, while in the so-called soft CLIL form, the content of the subject is subordinate to the language goal. A higher emphasis is put on learning the language. Briefly said, the CLIL method employs the language to pass on the knowledge from a different (usually non-linguistic) subject.

The CLIL method was used for the first time at the Jyväskylä Finnish University and also in the Netherlands in the late 90s of the last century. The countries mentioned above emphasize project-based learning when students (from their home countries and from abroad) work in various groups for one semester. As a consequence of the co-operation they are given the opportunity to work with people of different backgrounds and with different native languages. This fact enables them to get used to a wide range of accents. The CLIL method is said to correspond with the process of being acquainted with the so-called lingua franca and uses it as a communication tool among nations in order to enable everyone to understand each other without having to learn many languages [1; 12].

As it can be seen in the Figure 1 below, CLIL is supposed to develop some necessary competences in the current globalized world, such as а multicultural approach is to become more and more common in the current world and to live within one country with speakers of other languages with a different cultural background may be soon considered as a matter of fact. This approach develops communication across cultures [2; 156].

Students are offered real-life situations where they are to use English as a communication means and this makes them raise their awareness as to how the language itself is used, as well as cross-cultural awareness. The learners develop their immediate speaking skills with an emphasis on fluency.

A diversity of methods and materials prepares students to deal with people from different cultural, language, and social backgrounds and to perceive the differences as a part of other culture that enriches them. It enhances teamwork and helps individuals to find their roles in a team. The use of various kinds of materials helps to develop learners' flexibility.

Excellent materials offer up-to-date study resources available not only for teachers but also for students in various forms. These materials develop learners' orientation in online and printed information. Students are exposed to written and oral resources and, due to that fact, they become aware of different idioms, sayings and fixed expressions used in all sorts of situations.

Neurodidactics supports ICT application in classrooms and the so-called brain based activities. Learners have the opportunity to learn about their learning styles (e.g. visual, kinaesthetic, auditory) within these kinds of activities and gradually work on developing skills.

Gender sensitivity is dealt with in David Crystal's book called How Language Works where he says that gender in language has drawn a lot of attention due to the influence of feminism in the USA. Even new words are formed to respect both sexes, such as police officer instead of policeman/policewoman. Learners become aware of the current genderrelated situation and therefore they avoid causing faux-pas [3; 102] (Fig. 1).

Another consequential feature is the emphasis on active participation of the learners. The teacher's role in the classroom is more concentrated on monitoring and assisting as Kalhous, Obst et al. (2002) recommend in the Learning Pyramid. This way enables the students to remember and experience more as their curiosity is boosted up by certain types of activities (e.g. brainstorming, mingling and matching, filling in the rest of a sentence or a paragraph, etc.) [3; 155].

CLIL as a teaching method has its advantages but it also has some drawbacks when compared with other approaches. As for the positive aspects the following ones can be named: 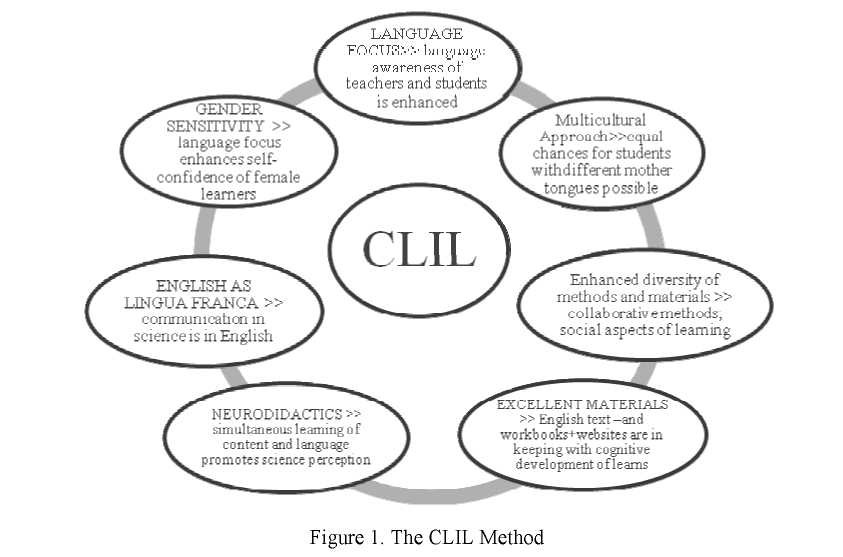 There are books describing the basic requirements for skills and competences of teachers using the CLIL approach. These cover e.g. foreign language acquisition by non-language teachers, becoming acquainted with a certain non-language subject (language teachers), the role of teamwork during lessons, CLIL methodology, the way of assessment, how to provide feedback, dealing with multicultural groups, didactics in a multinational group, etc.

The best option for teachers is to have a degree in a particular subject (e.g. economics) and at the same time a degree in a second language; or a willingness to develop or deepen their knowledge from the other subject. There is also the option of the so-called team teaching, i.e. a language teacher cooperates with a subject teacher. However, this possibility is rather demanding for lesson preparation, communication between the teachers and, moreover, it considerably increases the financial cost of a lesson.

The Figure 2 below shows several areas (vast) regarding the CLIL education of teachers. A lot of fields are to be taken into account when implementing the CLIL approach, such as careful lesson planning, awareness whether the plans correspond with the subject curriculum or the learners' needs, to know how to create the context for efficient learning using lead-in and follow-up activities. Furthermore, a teacher ought to clarify the way of assessment and so on [5; 48].

The topic of recruitment has been chosen for its variety of use in several fields (economic, technical, etc.). The topic can be used in both hard and soft CLIL versions, including some alternations depending on the main lesson objective. This lesson has been designed for students of economic faculty (see Table). The level of English, concerning all students, is between B1 and B2 according to the Common European Framework of Reference for Languages. The main emphasis of the example lesson is on pair work or group work to enable students to acquire teamwork skills. 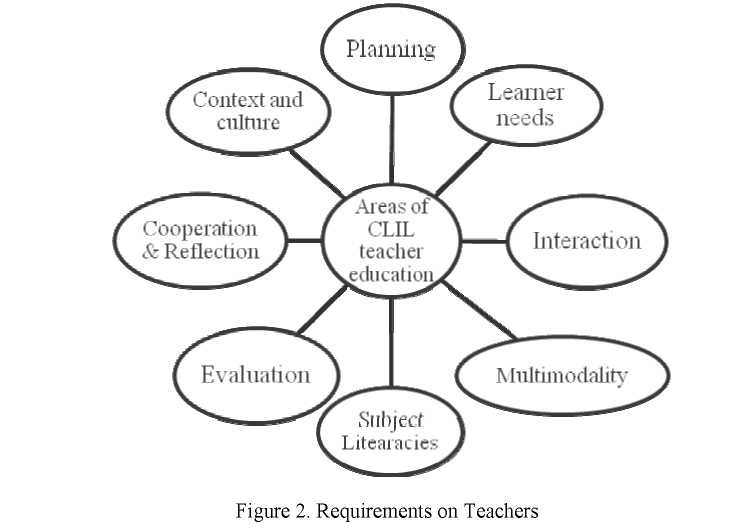 The first task for students is to brainstorm what areas the expression recruitment can cover. The students are given the visual prompt below and they are asked to discuss the questions in pairs.

Think of the qualities a good secretary should have. Why?

Read the article and discuss in pairs what title would be suitable for each paragraph.

Good employees are hard to find. You place an advertisement and then wait for the applications to come flooding in. In a day or two, you're pleased to see the stack of applications waiting for you? How many are there: 100, 200? or more? Well done! What a response!

When you begin to look through the applications, you may feel disappointed. You think: Why did this guy apply? He doesn't have the experience you asked for. What? She's never even done this kind of job? Is this candidate joking? He probably chose the wrong advertisement.

To find and hire the best candidate is not an easy job. Most of the applicants won't have the required qualifications and then it is the matter of selecting the best of these. So what qualities are important when interviewing? The following qualities are most likely to appear on a list for consideration: hardworking, someone with positive attitude, experienced, initiative, team player, someone responsible and someone who is stable (Pettinger, 2011).

Why is it difficult to find good employees?

What are the most common problems with applications?

What is the reason for making compromises when selecting new employees? Do you agree with the listed qualities in the last paragraph? Would you add any?

b) In pairs draft a structure of a European CV.

5. In small groups, find out the recruitment procedure in neighbouring countries and present the differences and similarities

The use of Content and Language Integrated Learning is considered a new pattern in language and subject teaching as for integrating both parts (linguistic and factual) into teaching. Next, it responds to the needs of globalization and uses lingua franca as a means of communication within multinational communities. The practical employment of this teaching approach is expected, although it is quite demanding for the participating learners and teachers. CLIL emphasizes effective learning outcomes, cognitive knowledge, critical thinking, and real life use of a language in the subject's background. Learners acquire the basic structures for communication in a foreign language which is being developed.