One of the integral developmental stages of the Peripheral Nervous System (PNS) is the myelination process because it provides fine-tuning of the millisecond precision of the nervous system. Peripheral glial cells namely Schwann cells provide myelination in the PNS. During the development these cells undergo several stages such as neural crest cells, Schwann Cell Precursors, immature Schwann Cells and myelinating or non-myelinating Schwann Cells; however, the fate is reversible this might be providing partial PNS repair in the adulthood; therefore, dissecting of the myelination process may help to develop treatment for the PNS dysfunctioning emanated from improper myelination. Neuregulins can be considered as one of the key players for Schwann cells development required for their migration, survival, proliferation and differentiation. However, Neuregulins are still under the investigation for their role in the differentiation of Schwann Cells. On the other hand, cyclic AMP, which is indispensible signaling molecule in the cell, was also known to be involved in the differentiation of the Schwann Cell, however there is little knowledge on the role of cAMP in this process. This short review will describe NRG1, a NRG1/ErB signaling cascade and the interaction of NRG and cAMP signaling cascades as well as several models for NRG and cAMP interplay will be proposed.

Introduction: One of the integral developmental stages of the Peripheral Nervous System (PNS) is the myelination process because it provides fine tuning of the millisecond precision of the nervous system. Schwann cells (SC) produce PNS myelin sheath which is compactly stacked membrane lipid layers that provide electrical insulation around the axon. SCs originate from neural crest cells, multipotent cells migrating away from the most dorsal aspect of the neural tube. Upon the completion of the migration, some progenitor cells undergo several transitional stages such as Schwann cell precursors, immature SCs and mature SCs [1]; they are distinguished by the gene expression and molecular profile, particularly, SCPs are associated with axons and rely on Neuregulin (NRG1 type III)-mediated survival; the markers of SCPs are P0 (major peripheral myelin protein),Cad19 (cadherin 19), SRY sex determining region Y box 10 (Sox10); immature SCs are associated with axons, NRG1 mediated autocrine survival. The markers are glial fibrillary acidic protein (GFAP), calcium-binding protein S-100, octamer binding transcription factor (Oct6 ), lipid antigen 04, Po, Sox10 [2]. Each myelinating SC wraps axonal segments in 1:1 ratio and a non-myelinating SC envelop several axons to form Remak bundles in a process called radial sorting. A direct glial cells contact with different signals on the axon surface, such as Neuregulins (NRG) may define the differentiation fate of SCs, either to become myelinating or non-myelinating [3]. The myelination process can be upregulated or down-regulated depending on the extracellular conditions which activate/inactivate different transcription factors (TF) [4]. The exact molecular mechanism of how the axons drive the differentiation of SCs is unknown; however, this review will cover a few latest research works that may provide an important information on the myelination process by investigating the co-interaction NRG/ERBs signaling and cAMP levels in pro-myelinating SCs..

NRG1 is, for certain, one of key players in the development of SCs as it is a mitogenic, anti-apoptotic and one of differentiation factors for SCPs and immature SCs [5]. NRG1 belongs to the family of secreted or membrane-tethered glycoproteins [6]. There are three identified isoforms (namely I, II and III). Upon exposure on the cell surface NRG1 are cleaved by multiple metalloprotenases (“shedasses”) collectively to release the extracellular epidermal growth factor like (EGF) domain [3]. All NRG1 isoforms share the EGF-like domain in the C terminal which is essential receptors binding and the type-specific N terminal, so, for example, type III has a cysteine rich domain which functions as a second transmembrane domain thereby allowing the NRG1 type III to tether on the axonal surface upon cleavage [7]. NRG1 types I and II signal in a paracrine and juxtracrine fashion [8],while NRG1 type III remains membrane-associated and is accessible for cells in the direct contact with this NRG1-enriched axon segment. NRG1 type III is considered as a key isoform for the PNS myelination process because this type is mainly expressed in the peripheral neurons and it is essential for the myelination both in vitro and in vivo [8]; for example, NRG1 type III determines the thickness of myelin sheath in PNS [9].

If NRG1 is the key what is the lock? NRG1 binds and activates ErB receptors on the surface of glial cells. ErB are large proteins of EGF receptors superfamily of tyrosine kinase receptors with a single transmembrane domain [10]. Several ErB isoforms exist such as ErB2, ErB3 and ErB4. ErB2 has a poor ability to homodimerize, while ErB4 poorly expressed in the PNS thereby ErB2/3 is assumed a predominant combination of NRG1 receptors in the PNS [6]. ErB2 is the kinase essential for signaling however due to its low affinity for NRG1 it dimerizes with ErB3, which in contrast has a high affinity for NRG but lacks the kinase activity [8]. Conformational changes caused by the ligand binding induce Erb2/ErB3 complex to heterodimerize and to autophosphorylate leading to the activation of different kinases such as MAP kinase, Pi3 kinase [1].

It is still under investigation what exact signaling cascades are recruited upon NRG1/ErB activation; however, several markers associated with the NRG1/ErB signaling were identified, for instance, Sox10, which is expressed at all, stages of the SCs development. Sox10 is a TF, which has a DNA binding domain of the high mobility group box family. It controls the expression of myelination-associated proteins [4] such as Oct6 in immature SCs [11] and ErB3 [12]. Oct6, POU-domain TF, upregulates immediate early gene Krox-20. Krox-20 is Zinc finger TF indispensable for myelination formation and its maintenance. Krox- 20 promotes SCs differentiation and upregulation of myelin genes such as Myelin Protein (Po), myelin associated glycoprotein (mag) and myelin basic protein (mbp) [13]. Both soluble and membrane-bound NRG promote Krox- 20 upregulation by activation of so called the myelinating SCs element (SCE). Recent data provide in vivo evidence that dimeric SOX-10 binding upregulates Oct6 followed by synergistic SOX -10 and OCT6 activation of Krox-20 by the binding to 35 base pairs core element of SCE [14] which in turn promotes pro-myelin genes expression leading to the development of a myelinating cell fate [15]. This can be referred as the model of feedforward loop in which Sox 10 (factor A) activates Oct6 (Factor B) than they synergistically activate Krox-20 (factor C) providing temporal and forward momentum in gene regulatory networks [15] (See Fig. 4); although, there may exist additional KROX-20 activators such as Zinc finger TF such as yin- yang TF (YY1) [16]. Further research should shed light on the downstream NRG1/ErB signaling cascade.

Despite the long-running observation that cAMP mimics axon contacts and promotes SCs differentiation, there were no direct evidence for NRG1 and cAMP cointeraction. The paper by Arthur-Farraj and colleagues provides first evidence for NRG1 and cAMP to promote Krox-20 and Po expressions but neither agent sufficient enough to drive and maintain myelination by their own (See Fig.1, 2 and 3). These provide evidence that NRG1 is involved in the differentiation of SCs and it is a positive pro-myelin signal. Moreover, it was proposed that cAMP levels may represent a threshold that determines the NRG1 downstream effects; so for example, low cAMP levels promote NRG mitogenic effects on SCs whereas high cAMP (>1mM) at least in experimental conditions lead to SCs pro-myelination [17] possibly trough PKA-mediated activation of TFs such as CREB (cAMP response element binding) pathway [17] and/or NFkB [11]. These results may suggest that cAMP modulates the response of immature SCs and SCPs to the NRG III. This also may suggest that if ErBs exist in lipid bilayers in the pre-formed dimmers [11] and assuming that NRG1 type III is present at saturating levels during the normal development cAMP levels may tune the sensitivity of the cells to the NRG1 and thereby promote either proliferation or myelination. In addition, this may represent a checkpoint of the appropriate conditions and time for myelination initiation.

Another question to be answered is whether cAMP is important in vivo and if it coordinates with NRG1. Monk and colleagues, using forward genetic screening showed that cAMP is involved in SCs myelination in vivo; moreover, Gpr126 a member of adhesion G-protein coupled receptors family [18] was shown to be involved in cAMP synthesis in the cells. Interestingly, Gpr-126 signaling is evolutionary conserved and it is expressed in mammals. Zebra fish Gpr 126 -/- were viable and fertile [18] whereas mice Gpr126 -/- died at P16 suggesting Gpr126 might be crucial for postnatal establishment of the PNS in mammals [19]. Gpr126-/- mice demonstrated altered axon sorting, the axon loss, the absence of Remak bundles and SCs arrest in pro-myelinating stage [19]. Sox10 was detected in Gpr126 -/- mice SC, neither Krox-20 nor MBP or Po were not expressed in these cells [19]. It was shown that GPR126 and NRG/ERB pathways do not affect each other's expression [18]; however, it was not examined if these two co-interact. Therefore, this suggests that one of the two might be involved in the initiation (cAMP) and the other (NRG1) enhances further differentiation or alternatively upon an unknown extracellular or axon derived trigger Gpr126 might be constitutively activated and modulate NRG1 signaling by regulating cAMP levels. This goes in consistence with the previous data that NRG1 is mitogenic when SC cultured in the neuronal absence but neuronal presence promote differentiation [8] suggesting that there should be an additional axon derived trigger that might recruit cAMP signaling cascade (Summarized in Fig.4). On the hand, it would be interesting to see if NRG1 were blocked in immature SCs and whether Gpr126 could still affect myelination initiation and its maintenance. Moreover, using Fluoro- labelled ATP might also shed some light if GPCR has a role in cAMP generation. Some evidence suggest that cAMP increases ErB receptors [6] and Oct6 [15] thereby suggesting that cAMP may tune the sensitivity of SCPs to NRG1 type III. It would be interesting to see if Gpr126 would induce myelination in the CREB -/- animal to see if cAMP interacts with NGF/ErB signaling cascade. In conclusion, these two papers provided evidence that cAMP is involved in the differentiation of SCs in vivo as well as NRG1 at least in vitro; moreover, the signaling might be inter-dependent and provide another checkpoint for the complete differentiation.

Conclusion: This short review describes how NRG1 type III may act in the differentiation of SCs and how this signaling cascade might be related to cAMP recently found to be involved in the PNS glial differentiation in vivo and cAMP signaling may be of a significant importance for the myelination of the PNS. Indeed these might help to dissect of the exact molecular pathway is a very important because it would help to treat many demyelination disorders. 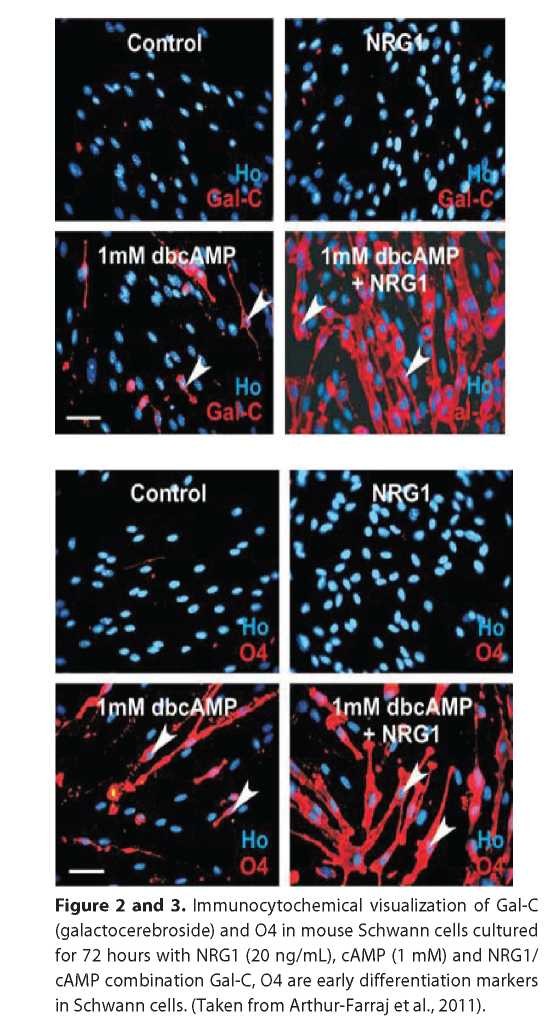