Kazakhstan is the only country in the CIS where six types of cancer screening, being implemented at the nationwide level at the expense of the state budget, cover more than two million people which comprises 12% of the country population. The effectiveness of screening programs depends on the participation of target populations. In order to develop strategies and proper organization of the screening information on the following is required; in particular, social awareness on the screening programs, emotional experience of men and women, behavioral nuances on undertaking the screening, perception on knowing about being under high risks of cancer development. We conducted a study aimed to evaluate individual factors associated with Breast, Cervical and Prostate cancer screening uptake among targeted groups in the city of Almaty. 657 people, who undertook the screening, were surveyed in this study, in particular, 242, 204 and 189 women participated in breast and cervical cancer screening and men who undertook prostate cancer screening respectively. The study results showed that there is need on conducting consultations and support provision for overcoming psychological fears over cancer screening.

The global burden of non-communicable diseases (NCDs) including cancer is a major public health threat that undermines social and economic development worldwide [1]. Cancer is among the leading causes of death worldwide. In 2015, there were 17.5 million incident cancer cases and 8.7 million deaths. Prostate cancer was the leading cause for cancer incidence (1.6 million) for men and Breast cancer for women (2.4 million) [2]. A similar inclination of cancer incidence growth happens in the Republic of Kazakhstan. In 2011-2016, there was an increase in the cancer incidence, mostly due to introducing programs on cancer early detection [3]. One of the most important ways to reduce the burden of NCDs is an early detection and timely disease treatment that can be provided at primary health care level [4,5].

In recent years, Kazakhstan has initiated national screening programs to combat the NCD epidemic. These programs are implemented at population level at the expense of the state budget to cover more than two million people that comprises 12% of the country population. Among them there are six types of cancer screening [3,

Screening is defined as a strategy used in a population to identify the possible presence of an as-yet-undiagnosed disease in individuals without signs or symptoms [12]. According to ‘classical' definition of screening given by Alan Morrison this strategy consists of 3 levels, meaning that: “Screening for disease control can be defined as the examination of asymptomatic people in order to classify them as likely, or unlikely, to have the disease that is the object of screening (1st level). People who appear likely to have the disease are then investigated further to arrive at a final diagnosis (2d level). Those who were found to have the

disease are then treated (3d level)”[13]. Screening should be distinguished from prophylactic medical examination: screening aimed at identifying the only one disease, which is in the name of the screening; the only one test is performed and in strictly defined age groups. In Kazakhstan three types of cancer screening for reproductive system are presented in the table below.

We conducted the study aimed at assessing compliance with the principles of bioethics of reproductive system cancer screening at the first level in Almaty in 2016. The four principles that guide current bioethical decisionmaking such as beneficence, non-maleficence, autonomy and distributive justice were applied.

Moreover, the participants were questioned on not undertaking the screening. More than half of men (51.9%) and 35.0% of women noted about not knowing the to undergo a test for early detection of oncological disease (Picture 1).

Almost a quarter of the men surveyed and almost 20% of women noted the lack of time to attend medical facilities. Overall, 15.8% of respondents indicated that part of the population does not understand the importance of screening, 9% attributed this to indifference to personal health. On average, 14.3% of the respondents noted that people are afraid of detecting cancer and therefore prefer not to undergo screening, while this fear in women is 2 times more likely than in men. 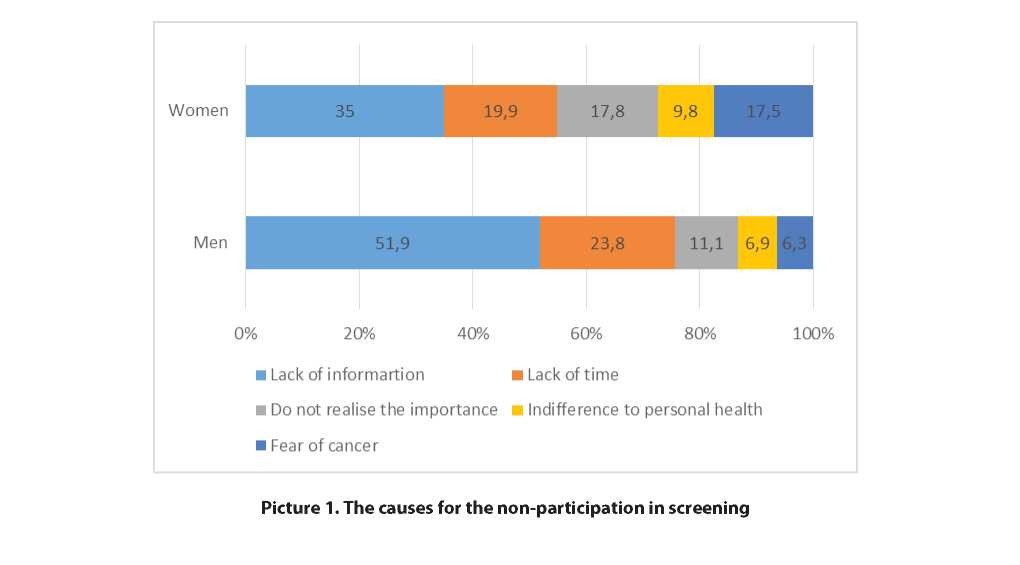 Two-thirds of the surveyed men (70.4%) and almost one in three of the women (27.4%) before visiting the outpatient clinic knew almost nothing about the upcoming screening. Only 15.3% of men and almost 60% of women, which is 4 times more, had general knowledge about screening (Picture 2).

Furthermore, the target groups were questioned on how much they improved their knowledge about screening after they had a test. More than 60% of respondents of both sexes updated simple general knowledge about the screening procedure, and this knowledge has increased by 17.2% compared to awareness before screening (Picture 3). The percentage of those who knew almost nothing about screening before the test on cervical cancer, breast cancer and prostate cancer has decreased more than 2 times after people had received the test: from 39.7% to 15.5%. However, a small percentage of those respondents who know almost everything about screening or almost improved the knowledge remains a small number (11.1% and 9.3% respectively).

When we questioned about the preferable sources for screening information, respondents of both sexes replied as follows: through mass media 16.4%, through the Internet 25.5%, from health workers of outpatient clinics 20.2%, through friends, relatives, and colleagues 15.2 %.

One out of every five respondents indicated two or three sources. As can be seen from the Picture 4 there was a difference between female and male groups. 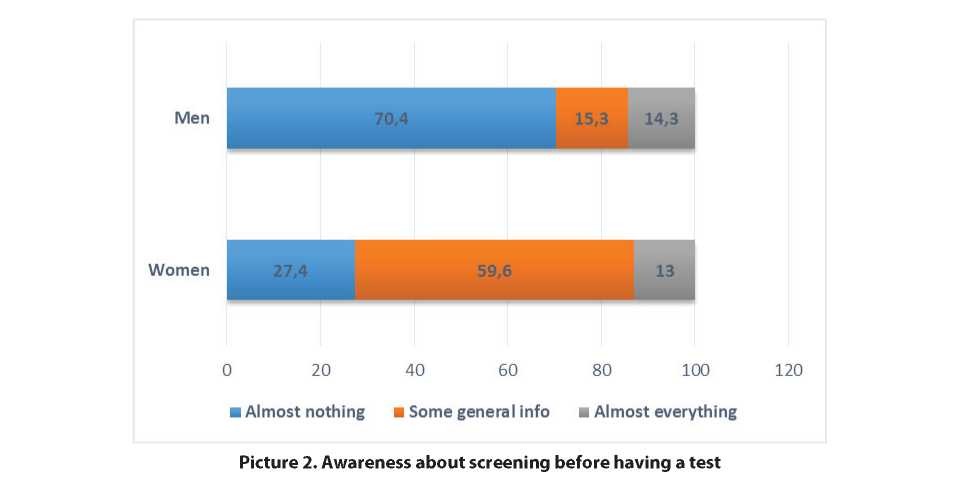 Discussion. Every patient has a right to full access to accurate information concerning the health or the disease. This ethical principle refers to informed consent, when most of patients prefer to know the truth about their health status in order to use correctly this information. When one searches for information on a disease, one considers the disease in its latent period. Examples of screening include routine mammography for detection of breast cancer, routine Pap smears for cervical cancer detection and routine testing for prostate antigen (PSA) to detect prostate cancer. Ethical principles that must be observed in cancer screening programs are aimed at maintaining confidentiality, awareness and minimizing unnecessary harm to patients enrolled into screening programs. In this regard, some ethical issues have to be re-considered as awareness of the program, confidentiality and the reduction of the potential harm. 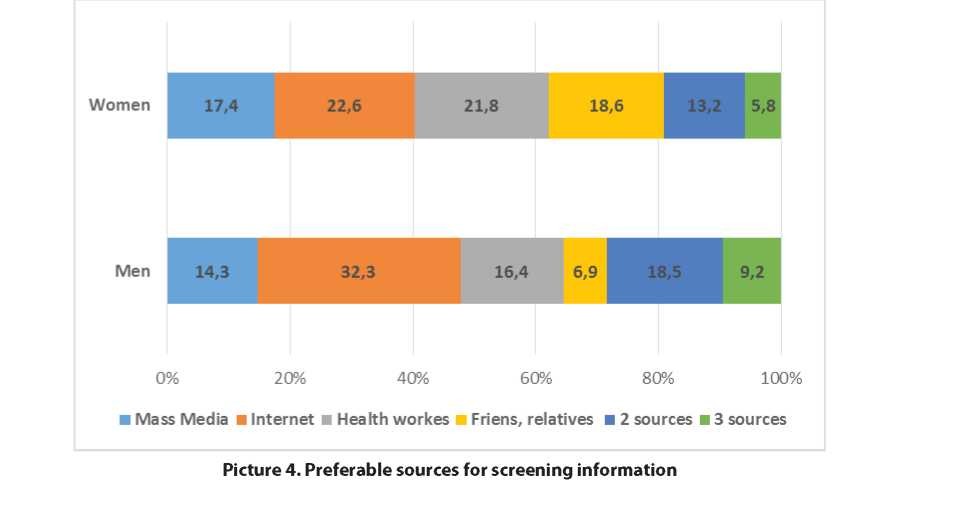 Conclusion. Compliance with ethical principles in cancer screening and providing detailed information for the target groups will lead to active and informed participation of the population in screening programs. The study results showed that there is need on conducting consultations and support provision for overcoming psychological fears over cancer screening.