Corporatization in healthcare lessons for kazakhstan from the italian experience

relevance of the Italian experience with corporatization in healthcare.

Corporatization in healthcare has been an important trend worldwide over the last quarter of a century, as part of the broader “New Public Management” (NPM) movement (WHO 1996).

The overall rationale behind the NPM movement is the assumption that the performance of public sector institutions can be improved by granting more autonomy to top managers, provided adequate accountability mechanisms are in place (...). This shift to increased autonomy had different features in different countries and in different industries, and took different names, including “autonomization” and also “privatization”, but the hallmark of this approach is that ownership remains in the hands of governmental entities: what changes is the legal status, usually together with a revised regulatory framework and new funding patterns meant to reward “results” (Pollitt & Bouckaert 2000).

The debate about the overall effectiveness of the NPM movement is still ongoing, because the reforms it inspired – as every policy change – brought some achievements while generating drawbacks as well, and there is no way to draw an objective balance between the “pluses” and the “minuses”: this can only be done in political terms (Lynn 1998; Noordhoek & Saner 2005). Researchers, though, can study these results to understand what triggered the achievements and the drawbacks, so as to replicate the former and avoid, if possible, the latter.

The healthcare sector has been a prime candidate for corporatization, partly because the delivery patterns in some parts of the sector most visible to the general public (e.g., hospitals and polyclinics) do not differ much from those of industrial firms: actually, private health service providers have existed under the legal status of corporations for decades, especially in the countries where the pooling of financial resources for health is ensured by health insurance companies rather than the State (Saltman et al. 2011).

The United Kingdom and New Zealand are early examples of countries with a “Beveridgean” healthcare system (i.e., with health services providers primarily owned by governmental entities and funded through general taxation) that introduced corporatization in healthcare (Brusati 1998; Fattore 1999). The Italian National Health Service (NHS) has cumulated bynow twenty years' experience with corporatization, which was mandated by presidential decrees issued in the early Nineties. For at least three important reasons, the Italian experience offers particularly interesting insights for Kazakhstan, as well as other countries of the former Soviet Union that inherited a “Semashko”-style healthcare system. First, as highlighted by Ongaro and Valotti (2008), public management reforms in continental Europe feature distinctive traits compared to similar reforms in Anglo-Saxon countries, largely because of the different administrative traditions derived from reliance on civil law instead of common law. Secondly, up until the 1991-1993 reforms most Italian health service providers were directly controlled and funded by a large number of small local-level entities, as in Kazakhstan. Last but not least, as a consequence of the second point, local-level politics had a significant influence on decision-making, a feature that cannot be detected on the same scale in the more centralized National Health Services of countries such as the United Kingdom or New Zealand. As a matter of fairness, differences must be also pointed out: in particular, Italy has a population density which is much higher than that of Kazakhstan, and this feature must be taken into account when assessing the lessons to be drawn from the Italian experience.

The Italian NHS was established in 1978, as a consequence of the financial collapse of the professional-based health insurance companies that, following the so-called “Bismarck” model, had funded health service providers owned primarily by municipalities. The Italian NHS was explicitly designed along the lines of the British NHS: funds were no longer pooled by health insurance companies, but levied through general taxation. Every year the state budget earmarked a given amount to the so-called National Healthcare Fund; the money was distributed to the Regions, which in turn allocated it to the so-called Local Health Units (LHUs).

From the legal point of view, LHUs were entities comparable to Soviet “raizdrav”. The entire country was divided in 625 areas, each entrusted to a LHU, which consequently served a population smaller, on average, than 100,000 inhabitants. LHUs had neither legal personality nor, as a consequence, direct control on their assets and finances. In larger municipalities LHUs were units (“strukturnye podrazdeleniya”) of the municipality itself, but normally they were consortia acting on behalf of the municipalities they represented. The top-level decision-making body of LHUs was the Managing Committee, made up of politicians appointed by the municipality(ies). LHUs were directly responsible for the management of the entire spectrum of preventative and curative services in their territory, including hospitals, polyclinics, general practitioners, as well as veterinary services and sanitary-epidemiological services; only research and teaching hospitals were not part of LHUs, and functioned as spin-offs of the Italian Ministry of Health. Following the establishment of the NHS, the staffs of all these services were transferred to the LHUs.[1] Coordinating LHUs was the responsibility of Regional Healthcare Departments, which regulated staffing levels and bed numbers not only at facility level, but also for each unit. In order to improve the effectiveness of the interface between health and social care, many regions entrusted social services provision to LHUs as well, establishing the so-called “Local Health and Social Units”.

In a way, the 1978 reform was the Italian answer to the ideas and values of the Alma-Ata Conference. The establishment of an NHS did allow important breakthroughs, as compared to the fragmented healthcare system it replaced: most importantly, it did foster a “holistic” view of health, and a corresponding emphasis on health promotion and disease prevention.

On the other hand, three factors limited the effectiveness of the set-up. First, health services providers were working in a highly bureaucratic environment that ensured the homogeneity of supply (at least on paper) across a very inhomogeneous country, but did very little to reward productivity, quality, innovation or entrepreneurship. Secondly, direct control of LHUs by local political elites meant that decisions had to serve the agenda of the ruling coalition, i.e. to satisfy as many constituencies as possible: even more in the unstable political landscape of Italy in the Eighties, “short-termism” led to significant duplications, and more generally to wasteful investments, which increased expenditure with little or no benefits in terms of health outcomes. Thirdly, to make things worse, this corporate governance model did not promote cooperation across LHUs, which (notwithstanding their limited size) were trying to serve needs locally, even when different LHUs had been established within the same city: a solution clearly at odds with ongoing trends in terms of patients' mobility, specialization of health services provision and growing healthcare costs.

As in 1978, also the large-scale healthcare reforms of the early Nineties were precipitated by external factors, i.e. the combined need to rationalize budgetary expenditure following the crisis of confidence which hit the Italian lira on international financial markets in 1992, coupled with the whiplash against traditional party politics and the unravelling of the political order of what came to be known as the “First Republic”, following the discovery of large-scale embezzlement cases (“Clean Hands” scandal).

The NPM movement offered a ready-made solution that fitted well the prevailing Zeitgeist, or “social weather” (Tenney 1912): to improve the efficiency and effectiveness of any governmental body it is necessary to disenfranchise managers and set politicians aside, together with the bureaucratic constraints they superimposed on managers. In a nutshell, “let the managers manage”!

The reforms that introduced corporatization in healthcare were enacted with three Presidential Decrees issues in short sequence in 1991, 1992 and 1993. If the establishment of the NHS in 1978 could be seen as the Italian answer to the “spirit of Alma-Ata”, the new wave of reforms coincided, not by chance, with the appearance of the World Bank report (Rondo Brovetto 1993), which strongly advocated “marketization” in healthcare. LHUs were turned into “Local Health Authorities” (LHAs – Territorial'nye Medicinskie Obedeneniya), i.e. public law bodies with autonomous legal status and direct control of their staff, assets and finances; “corporatized” hospitals got the same status. Importantly, both LHAs and “corporatized” hospitals were established as regional-level entities (obedineniya oblastnogo podchineniya): influence by municipalities was thus excluded, with a merely consultative Mayors' Council representing the municipalities served by the LHA set up as a forum where to ensure their voices could be heard.

In Italy as elsewhere, corporatization was coupled with changes in funding mechanisms designed to pay for outputs rather than just cover the cost of inputs. This step is a hallmark of NPM reforms: “quasi-markets” (Ferlie 1992), i.e. the establishment of contractual relationships between government- owned “purchasers” and “providers”, were singled out as the solution to keep public control while alleviating the productiv-

ity gap often inherent in collective ownership. As in Kazakhstan and in many other countries worldwide, a ready-made solution to “marketize” hospital services provision was offered by the adoption of Diagnosis-Related Groups (DRGs), i.e. the reimbursement mechanism introduced in the United States in the early Eighties for Medicare patients (Busse 2012). The purchasers, i.e. LHAs, kept a funding mechanism centred around capitation; capitation was also maintained as the main mechanism to pay general practitioners, although fee for service is also used to a limited degree to incentivize the provision of a small number of high-priority services.

In the new scenario outlined by the 1991-1993 reforms, Regional Healthcare Departments had to take two important decisions:

As an example, the following picture depicts the current situation of Friuli Venezia Giulia, a region with a population of about 1,2 million inhabitants, divided into four very different Provinces:

In order to understand the impact of the 1991-1993 reforms, and draw insights for countries that are now introducing similar changes in their healthcare systems, it is important to grasp what “corporatization” meant not only in terms of legal status, but of organizational-level innovations as well. 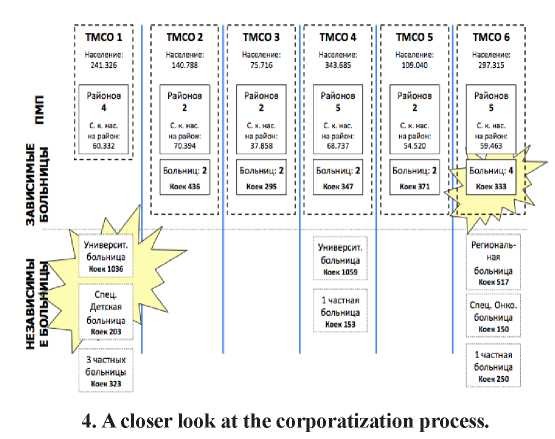 A major innovation in this respect was a radical change in the top-level decision-making body. Managing Committees were abolished, and overall managerial responsibility, both in LHAs and “corporatized” hospitals, was entrusted to a General Director appointed by the Regional Healthcare Department on the basis of a private law, fixed-term, performance-based con- tract.[2] The only requirement for General Directors is to have a university degree and five years' prior managerial responsibility, not necessarily in the health sector. The General Director has the right to choose a Clinical Director (usually a medical doctor with a public health specialization) and an Administrative Director (usually a law graduate), who are also appointed on the basis of private law, performance-based contracts, with the same rules in terms of duration as for the General Director's contract. The three managers are labelled collectively as the Directors' Council, or more informally – borrowing a Russian word into Italian – “la troika”. Their responsibility is to run the LHA or the “corporatized” hospital in keeping with the framework regulations laid down by the Ministry of Health, but most importantly to contribute to the implementation of the regional health plan, i.e. the mid-term development trajectories outlined by the Regional Healthcare Department.

A systematic assessment of the consequences of corporatization in the Italian NHS has never been performed: nevertheless, the regions that granted more autonomy to providers (within the tight margins allowed from central regulations) seem to be performing better, in terms of expenditure control, waiting lists and customer satisfaction. If this is the case, then Kazakhstan seems to have taken the right step with the introduction of corporatization in its own health care system.

The Italian experience highlights that corporatization in itself does not work wonders: to deliver results, it must be balanced with an effective accountability framework. Purchasers play a critical role in this respect: it is primarily up to them to avoid fragmentation and limit opportunism by providers, which are possible negative outcomes of corporatization. For this purpose, purchasers are required in particular to fine-tune funding mechanisms over time (including, in particular, controls on the appropriateness of the health services actually delivered), so as to modify the payoffs associated to more or less co-operative behaviours.