The sensitivity of algae to the effect of antifungal drugs

The presence of pharmaceuticals, their metabolites and transformation products in the aquatic environment has become an increasingly serious problem in recent decades. Currently, people are using various pharmaceuticals. However, after their use, the drugs are removed to the wastewater treatment plant, where they cannot be completely eliminated. As a result, they reach the surface of the water. Their discovery in the environment and their biological activity raise concerns about potential adverse effects on non-target species. In this study, two of the most widely used pharmaceuticals in Kazakhstan, namely ketoconazole and terbinafine, were tested for water toxicity using Chlorella species. These drugs were selected because they are one of the priority drugs based on risks for aquatic biota in Kazakhstan. The study assessed the effects of antifungal drugs for 72 hours by cell count, cell growth rate of Chlorella sp. We investigated the effects of substances in concentrations of 20–100 mg/L. As a result of the study, eco-absolute objects, compared with the control group, had a significant effect on the growth of Chlorella sp. cells, which led to 97.7±0.004 % (ketoconazole) and 96.19±0.007 % (terbinafine) inhibition of growth. In addition, the results showed that the growth rate of the representative of the aquatic biota Chlorella sp. decreased four times. This proves that Chlorella sp. are vulnerable to exposure to pharmaceuticals.

An increasing amount of pollutants is emitted into nature due to industrial production, the intensive use of drugs. And also the wide presence of drugs in the environment can be explained by widespread use in medical practice and incomplete disposal at treatment facilities [1]. The effect on homeostasis of various artificial substances (xenobiotics) was demonstrated in the thirteen years of the last century. Among other things, the polluting effect of drugs and chemicals became apparent only in recent decades, when it was recognized that it was potentially dangerous to humans [2].

Pharmaceutical preparations that do not decompose at sewage treatment plants are discharged into treated effluents, which leads to pollution of rivers, lakes, estuaries and rarely underground and drinking water. Where sewage sludge is used on agricultural fields, soil contamination, runoff to surface water, and drainage can occur [4, 5].

Over the past decades, the emergence of pharmaceutical pollutants in the aquatic environment, the environment has become a matter of concern throughout the world. Micro-pollutants, also called emerging pollutants, consist of a huge amount of substances of anthropic or natural origin, including pharmaceuticals and personal care products, steroid hormones and agrochemicals. Pharmaceutical preparations, their metabolites enter mainly domestic wastewater after use and excretion in patients. These substances are usually present in water at low concentrations and each substance has a form and mechanism of action that not only complicates their detection and analysis, as well as their removal at drinking water and wastewater treatment plants [6–7]. As a result, the toxicity of drugs to the environment is checked in aquatic (surface water) organisms such as daphnia and fish. Another problem is the lack of maximum permissible concentrations of these compounds, and therefore, there are no or very few precautions and control measures to ensure that these compounds, in particular polluting microorganisms, do not enter surface water [8].

Monitoring of these pollutants, which were previously ignored, but often considered harmless, nevertheless, have significant consequences, has become possible thanks to modern analytical methods and tools [9]. Over the past decade, in the course of monitoring studies of the aquatic environment, about a hundred pharmaceutical preparations and their metabolites were discovered [10].

This article provides some experimental data and a summary of the effects of more commonly used pharmaceuticals on the environment and aquatic biota.

Work was carried out to identify priority active pharmaceutical ingredients in the surface waters of Kazakhstan. The study found the main drugs that could cause concern, as they had the highest risk ratings in Kazakhstan. Such high-risk drugs include ketoconazole, terbinafine, etc. [12].

There are a large number of published studies describing the environmental risk of ketoconazole. In 2004 T. Hegeland and C. Ottosson investigated the fish response to ketoconazole. Their results showed that this compound has a toxic effect on rainbow trout and killfish at 12 and 100 mg/kg, as it inhibits the activity of the cytochrome enzyme in fish [13].

This study was based on the OECD 201 method: Test for the inhibition of freshwater algae and cyanobacteria [14]. In our experiment, unicellular alga Chlorella sp. was used as a test organism.

For ketoconazole and terbinafine, we used three different concentrations (20 mg/l, 50 mg/l, 100 mg/l) to evaluate the effect of the drugs on algae. Each concentration was done in triplicate. The pH of the solutions was measured at the beginning and at the end of the test. The optical density was measured and the biomass of Chlorella sp. in solutions.

The following mineral composition of Tamiya mineral medium was taken as a nutrient medium: 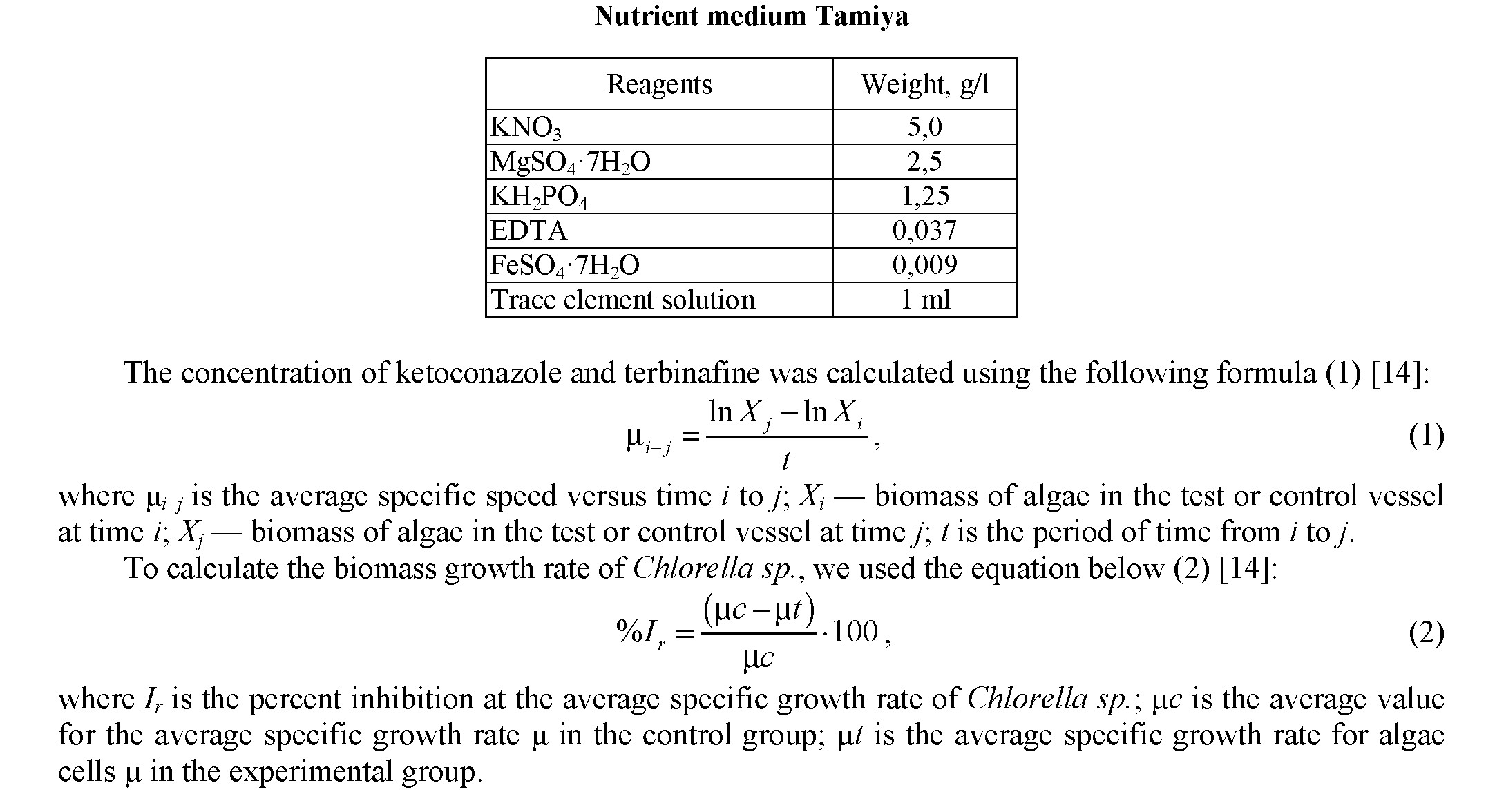 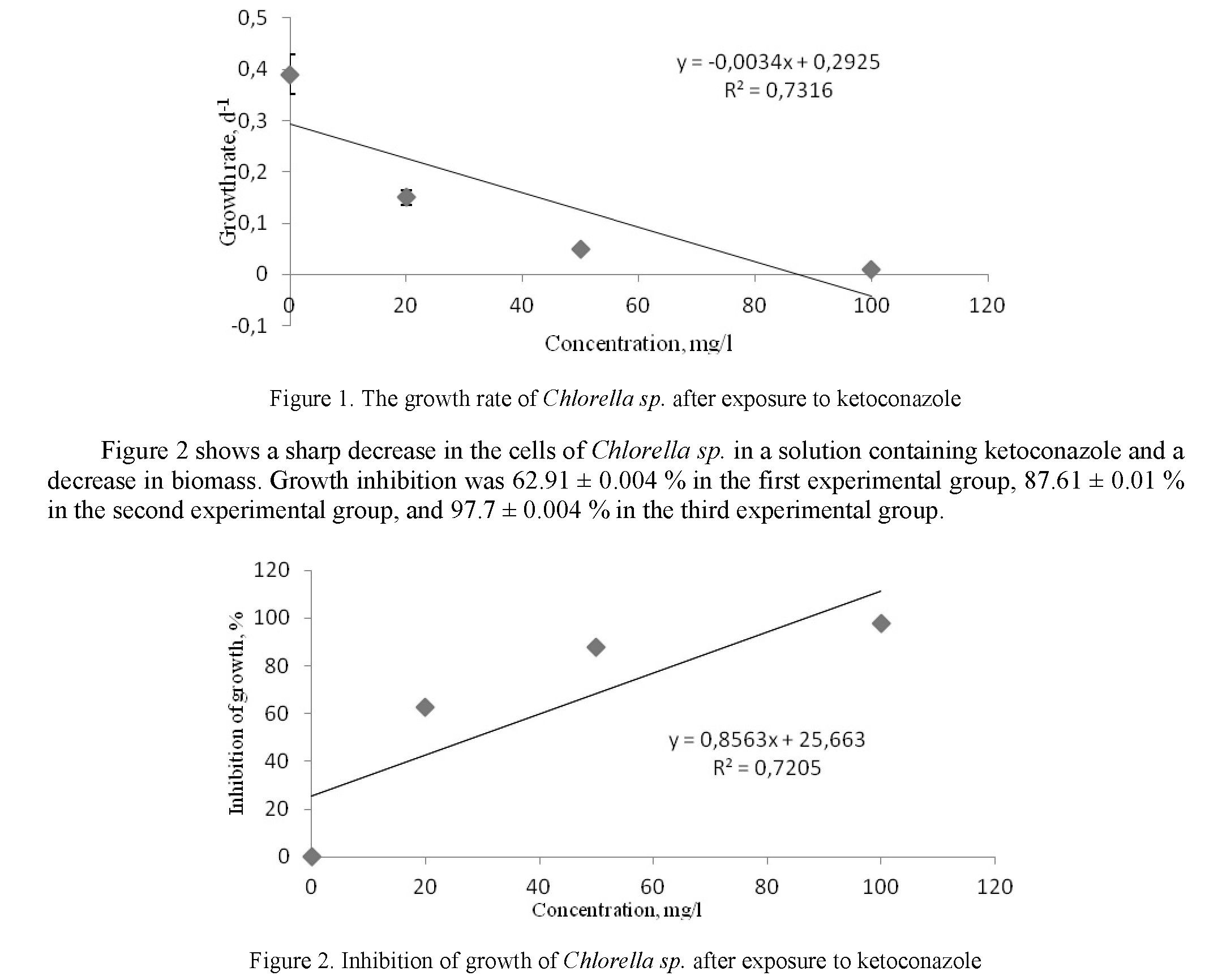 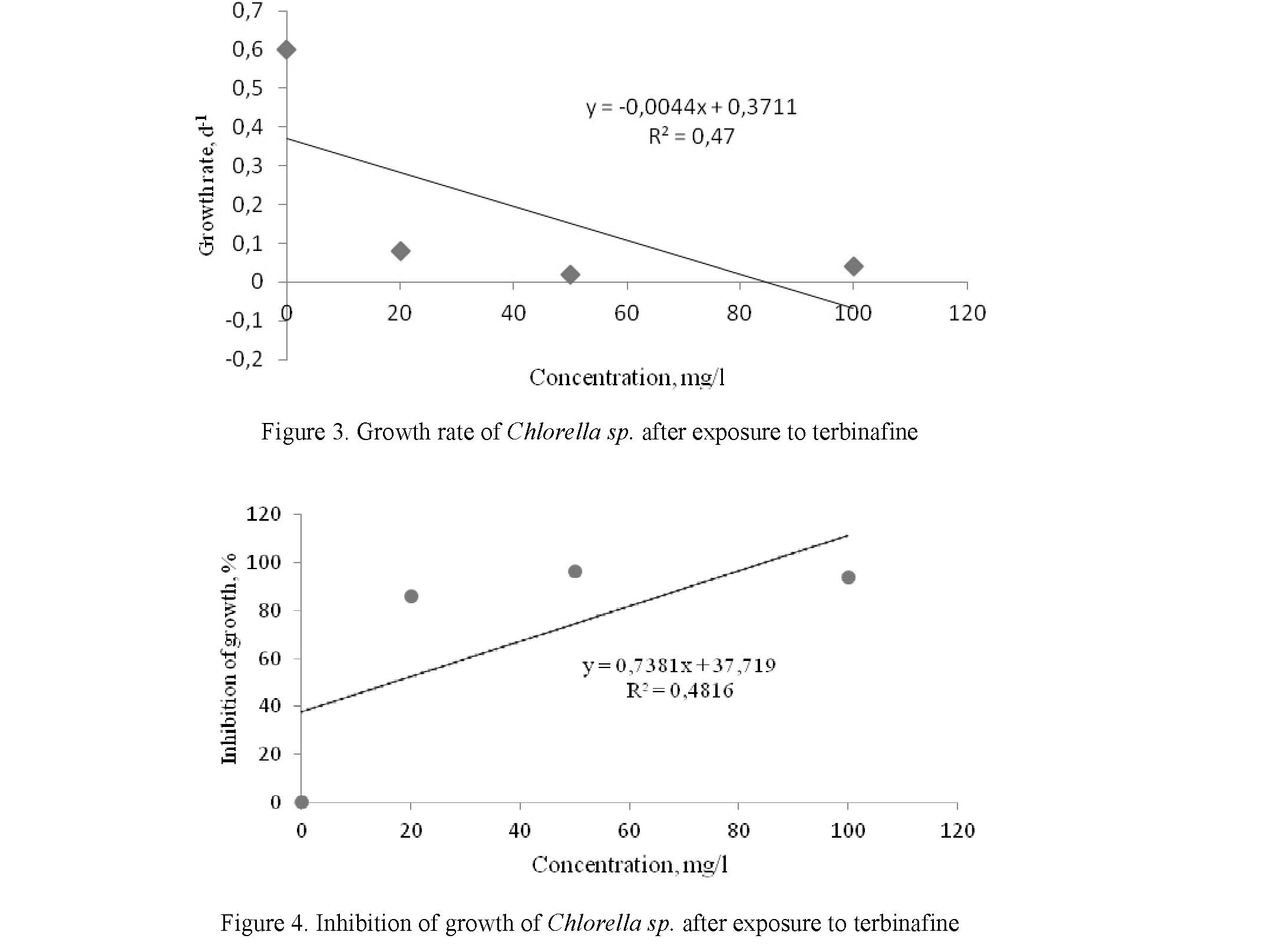 The results of other studies are in good agreement with our results. Based on these observations, we would like to draw your attention to the fact that the presence of various drugs in the ecosystem is very dangerous.

To summarize the study, cell growth rate Chlorella sp. sharply slows down in a solution containing the drug terbinafine (0.08 d–1; 0.02 d–1; 0.04 d–1) compared with ketoconazole (0.15 d–1; 0.05 d–1; 0.01 d–1). As well as inhibition of cell growth of Chlorella sp. in solutions with terbinafine is much higher compared to ketoconazole. Based on these studies, terbinafine is more toxic than ketoconazole and has a negative effect on aquatic biota. If the effects of antifungal drugs on aquatic organisms are not controlled, then diversity may change and lead to a reduction in algae populations.

In the experiments of M. Cheb and L. Blach the effect of the synthetic antifungal drug ketoconazole on Lemna minor, which is a floating freshwater plant and is often used in phytotoxicity analyzes, was evaluated.

In the works of E.K. Palomaki, the toxicity of terbinafine was studied by conducting an experiment with green algae Pseudokirchneriella subcapitata. Terbinafine was highly toxic to algae, with an EC50 based on a growth rate of 90 nM and a biomass of 50 nM. Based on the analysis and research results, terbinafine has the same mode of action in P. subcapitata as in fungi, where an increased presence of squalene leads to cell death. Based on these individual species analysis and SWIFT analysis, terbinafine has been designated as «a very toxic pharmaceutical ingredient for aquatic organisms» because of its toxicity to P. subcapitata and Chlorophyceae algal [17].