In the leading scientific centers of the world, research in the field of microbiology of dairy products for healthy nutrition production and probiotics containing live cultures of lactic acid bacteria, which are antagonists of various representatives of opportunistic-pathogenic and pathogenic microflora of the human intestinal tract, becomes particularly relevant. The effectiveness of probiotic preparations and products of milk functional nutrition depends primarily on the properties included in their species of different strains of bacteria. In this connection, at present the priority is given to the study of lactic acid strains isolated from natural sources, having high probiotic activity. One of the main components of starter cultures for dairy products and probiotic drugs is most often bacteria of the genus Lactobacillus. This article presents the study of morphological, culture properties, acid-forming ability, antibiotic sensitivity Lactobacillus helveticus isolated in the Karaganda region, having antagonistic activity towards test strains: Staphylococcus aureus NCTC 12973/ATCC ® 29213 ™, Escherichia coli NCTC 12923/ ATCC® 8739™, Salmonella typhimurium NCTC 12023/ ATCC® 14028™, Pseudomonas aeruginosa NCTC 12903/ ATCC® 27853™, Klebsiella pneumonia NCTC 9633/ ATCC® 13883™. The use of modern microbiological methods allowed screening of isolated cultures and selecting of biological active strains: Lactobacillus helveticus-17, Lactobacillus helveticus-20, Lactobacillus helveticus-14, Lactobacillus helveticus-15. According to the obtained results, strains Lactobacillus helveticus promising applicants for the consortium Lactobacillus spp. And it makes possible to judge the competitiveness of these strains.

One of the main components of starter cultures for similar products is most often bacteria of the genus Lactobacillus [1].

Lactobacteria form round, smooth, convex with flat edges, opaque and non-pigmented colonies on nutrient medium. They well grow on the semi-fluid nutrient medium containing 0.15–0.75 % of concentration of an agar. The agar creates the low oxidation-reduction potential of the environment and microaerophilic conditions.

Lactic acid sticks differ in their biochemical and physiological properties. Lactic acid sticks have a brooding type of metabolism, cleave carbohydrates, and at least half of the carbon of the end products of fermentation is lactate. Lactobacteria are found in conditions of excess carbohydrates: for example, in foods (lactic acid products) and substrates of vegetable origin. In addition, they occupy many niches inside (normal phlora) and on the surface of the human body [2].

The importance to the organism of these bacteria lies in their metabolic functions; they can suppress the growth of various pathogenic and opportunistic microorganisms by creating an acidic medium due to the production of lactic and acetic acid, hydrogen peroxide, ethanol as a product, etc. [3].

Bacteria of the genus Lactobacillus have always attracted and attracted the attention of scientists and researchers around the world due to their great practical value. To date, the general biological properties of certain species of the genus Lactobacillus have been studied in detail by scientists and researchers abroad, CIS and Kazakhstan.

On the study of biological properties and correct identification of lactobacilli, the works of scientists and researchers in this field from Kazakhstan are devoted: K.Kh. Almagambetov, A.R. Kushugulova, I.S. Savitskaya, S.A. Saduahasova, etc. [4–5].

Although the study of the biological properties of lactobacteria strains cannot be considered complete:

– First, it is very likely that the biological properties of lactobacteria will change during long-term storage as industrial crops.

– Second, the physiological variability of human disease agents has often been observed recently, and many studies have shown an increasing virulent of opportunistic strains. Therefore, the antagonistic effects of lactobacteria on opportunistic strains may also change and require adjustments.

– Third, variability of opportunistic bacteria also affects the increase of antibiotic resistance. The produced resistance, supplemented by plasmid transmission to sensitive strains, occurs in bacteria faster than expected, a trend that undoubtedly affects lactobacteria as well. However, it is necessary to constantly study the antibiotic resistance of lactobacteria, as already existing antibiotics are constantly being improved and new antibiotics are being created.

– Fourth, lactobacteria are largely naturally resistant to a range of antibiotics, allowing them to be used as a probiotic in the process of antibiotic therapy. Since, when taking probiotics, lactobacteria enter into the human body in the state of antibiosis, it undoubtedly affects their biological properties [6]. Therefore, according to literary data, it was concluded that under the action of gastric juice and bile probiotics lose more than 90 % of their activity even before entering the intestine directly. It is a disadvantage which is considered insufficient resilience when exposed to factors such as temperature, bile salts, etc.

There were isolated 6 strains of lactobacteria from milk product (cheese, brynza, suluguni- cooked at home) produced in the Karaganda region (in vitro study). The tests were carried out in accordance with aseptics regulations.

Sampling: At the intended sampling site, the surface of cheese, brynza, suluguni was burned by heated scalpel. A sterile probe was inserted obliquely into the middle of the head at 3/4 of its length. From a piece of cheese on the probe, 15 gm of cheese was taken with a sterile spatula and placed in a sterile petri dish. After 10 g of cheese was weighed on a petri dish, transferred into sterile porcelain mortar with a pestle, and thoroughly rubbed [7].

After incubation, isolated colonies were determined with respect to Gram color, mobility, catalase presence and identified on MALDI BioTyper.

To determine the ratio of isolated strains to Gram color, smears were prepared from the colonies, stained by the Gram method, and microscoped using a digital ocular USB camera ToupcamTM Industrial digital camera, 14 Mpix.

Catalase Activity Test: Catalase activity of cultures was determined about the ability of catalase to decompose hydrogen peroxide with the release of gas bubbles. The reaction was set with a daily culture cooled to room temperature on a sterile slide. An isolated colony taken from the surface of the nutrient medium was rubbed on glass and a drop of 3 % hydrogen peroxide solution was pipetted. If gas bubbles appeared on the glass in 30 to 60 seconds, the reaction result was considered as positive. There was placed a test sample in parallel [9].

The mobility of the isolated cultures was determined by the “crushed drop” method [10; 7].

2-day cultures of lactic acid sticks grown on МRS-1 medium were looped onto Petri dishes with МRS-5 medium. After 2 days incubation at 37 °С, lactic acid stick strains were inhibited by UV rays for 30 minutes. Then, the surface of the plates was poured with a second thin layer of molten and cooled to +46 °С МRS-5 containing agar 0.7 % and mixed with the suspension test strains (0.1 ml of 1*109 mCFU/ml bacteria test strain suspension) [12].

Antagonistic activity was judged by the zone of no growth of test strains around the colony of the tested strain lactobacilli: zero — at the width of the zone of no growth, low — 11–15 mm, average — 16–20 mm, high 21 mm and more. The study was performed in triplicate and the results were expressed as arithmetic mean.

Method involves extracting antibacterial factors — complex products, a component of which is a protein or polypeptide component responsible for bactericidal activity. After inhibition of bacteria by chloroform pairs or UV rays, semi-liquid agar with test cultures of pathogenic and opportunistic bacteria is laminated followed by incubation at 37 °C for 18–24 hours. Antibacterial substances delay the growth of test strains and a clear zone is recorded above the plaque of studied microorganisms on the background of continuous growth [13].

Determination of acid formation activity. Two tubes of each culture were removed and put into a refrigerator for rapid cooling to prevent further acid production. Then, 10 ml of culture liquid was added to glass flasks, and phenolphthalein was added as an indicator 1 drop.

Data of acid formation activity, expressed in degrees Turner /°Т/, was calculated by the formula:

The sensitivity of probiotic bacteria to antibiotics was determined by disk- diffusion test. From the test cultures, there were prepared the suspensions conforming to the optical turbidity standard of 5 units (with a microbial body content of about 1,5×108 CFU/ml), 1 сm3 of the culture suspension was applied to each agar medium dish, uniformly distributed over the surface by lawn method and slightly dried in laminar flow. Further, the antibiotic discs of 5 pieces were applied to the surface of the nutrient medium seeded with a suspension 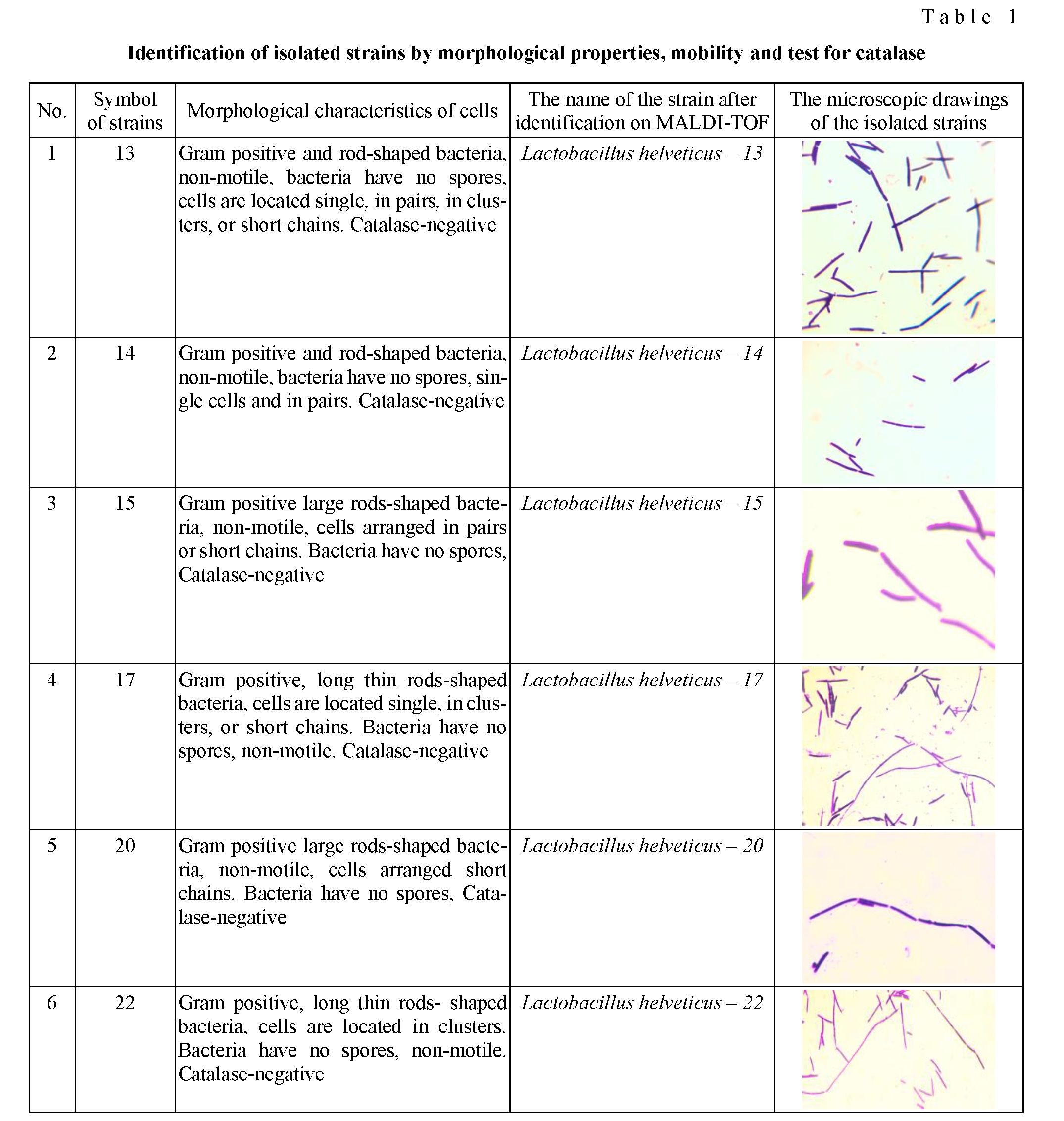 of lactobacteria cells. Inoculated plates with discs were incubated at 37±1 °C for 48 h. The antibiotic graph was formed by the diameter of the growth retardation zone of microorganisms. The study was performed in triplicate and the results were expressed as arithmetic mean.

Studies carried out on cultural and morphological signs show that they belong to the genus Lactobacillus (Table 1).

All cultures were identified using MALDI BioTyper, with Score values ranging from 1.700 to 2.000 indicating a high degree of reliability. All 6 isolated strains were identified as Lactobacillus helveticus.

According to the literature data [15], lactobacilli have high antagonistic activity against pathogenic and opportunistic microorganisms. They are able to produce substances with antibiotic activity during their growth and development, the resulting antibiotic substance provides the dominance of lactobacteria and suppression of pathogenic microflora. Therefore, the use of lactic acid sticks with pronounced antagonistic activity in production has practical importance. 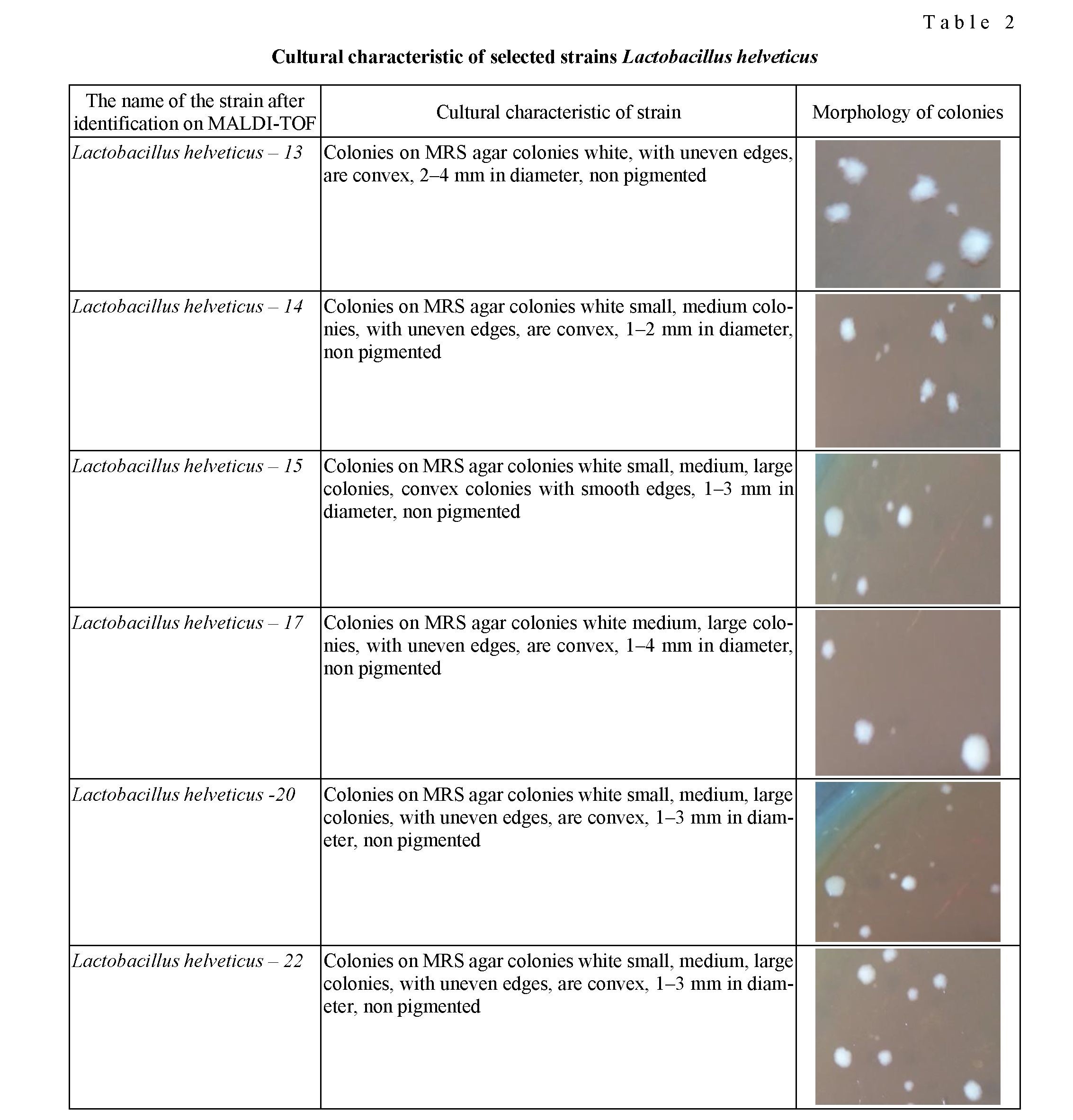 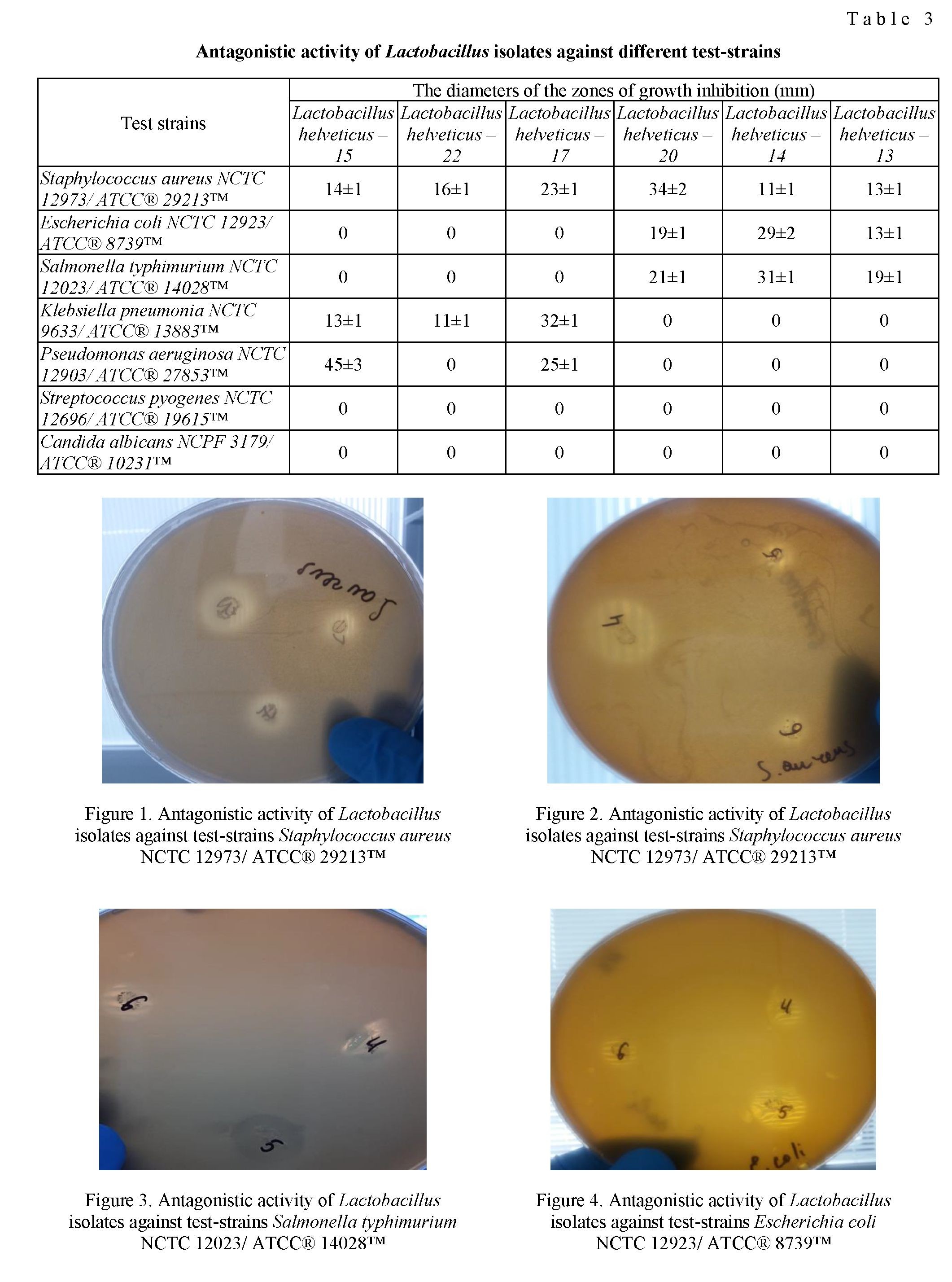 The studies revealed that only 6 strains of lactic acid sticks have low antagonistic activity to the teststrain:

With respect to test strains, the following cultures have average antagonistic effect:

With respect to test strains, the following cultures were not antagonistic effect:

The resistance of bacteria to antimicrobial preparation is a characteristic feature of a particular strain of the microorganism and this should be taken into account when selecting cultures, products and preparations with probiotic properties used in biotechnology. In this regard, we have conducted studies to determine the spectrum of antibiotic resistance of isolated strains of lactobacteria, to various most common antibiotics in medical practice. The obtained data on antibiotic sensitivity of lactobacteria are shown in Table 5.

Most strains of lactobacilli were sensitive to the following antibiotics: 3 strains to benzylpenicillin, levomicetin, cefuroxime, ciprofloxacin, colistin, gentamycin, 5 strains to amoxyclav, 4 strains to tetracycline, all 6 strains to clindamycin.

According to literary data [16], in vitro lactobacteria sensitivity tests are still poorly standardized. The evaluation of antibiotic sensitivity of these bacteria is extremely difficult because the size of the zones recommended for other bacteria are not applicable to them. To these reasons are added specific conditions of cultivation: enriched medium, complex composition of atmosphere, prolonged incubation.

Domestic microbiologists K.Kh. Almagambetov, I.S. Savitskaya with co-authors do not give the clear criteria for classification of strains of lactobacilli to sensitive or resistant [17]. Therefore, empirical concentrations in the antibiotic disc (μg/disc) that delayed the growth of at least one of the strains studied were selected as boundary minimum inhibitory concentrations (MIC).

1. Isolated strains of Lactobacillus helveticus are promising applicants and competitive strains for construction of the Lactobacillus spp consortium.