The wide range of common pine (Pinus sylvestris L.), its growth in different climatic zones and environmental conditions led to changes in morphological differences. The object of study is a ribbon woods population of pine (Pinus sylvestris L.) within the Irtysh region of the Semipalatinsk region. The article presents data on the growth dynamics of annual shoots of Pinus sylvestris in conditions of various gas contamination. The comparison of morphometric parameters of growth of pine shoots on three test areas, including the control area, was carried out. The pilot site was located within the city of Semey, the area of the Silicate plant (pilot site, Semey N 50.468442, E 80.212024) is considered the most polluted, two control areas were laid at a distance of 35 km (control area, Kashtak village, N 50.3983, E 80.6248) and 60 km from the city along the Borodulikha highway (control area, Borodulikha village, N 50.7336, E 80.8865). In an article describes the morphometric method of studying trees. For quantitative estimates of anthropogenic impact on the environment, data on the growth of woody plants are used, namely the study of the growth dynamics of annual shoots and pine needles. Based on this, 10 model pines were selected for the study at each site, aged 25–30 years, 6–9 meters high, d 24–36. The study of the length of the needles of experimental and control plants gave a clear characteristic of the changes arising under the influence of industrial pollution. As for the Pinus sylvestris growing in Priirtyshye, defined terms of the beginning, the termination, duration of visible gain.

Emissions of harmful substances are concentrated mainly in industrial areas, where factories, transport, boilers are concentrated. Transport and thermal power plants account for a significant share of emissions in large cities. Emissions from industrial enterprises are one of the main causes of disruption of the sustainable functioning of ecosystems, including forests, causing their partial or complete degradation [1, 2].

In the new ecological situation plants play an important hygienic role, many plant species have the ability to extract from the atmosphere and accumulate various toxic gaseous compounds [1, 2].

The main object for assessing the state of forests in the Semipalatinsk region is the common pine (Pinus silvestris L). This is due to its wide range, as well as an important ecological role and economic importance. One of the most frequently used parameters for assessing the impact of industrial pollution, diagnostics of forest ecosystems is the morphometric method of the plant organism, since the morphological parameters of the plant are very sensitive to changes in growing conditions.

The degree of damage to species is directly dependent on the rate of absorption of gas and the intensity of gas exchange. Depending on the gas absorption, there are 2 types of damage, acute and chronic. Acute is noted with short-term exposure to plants of high concentrations of phytotoxicant, chronic — at low concentrations, but a long period of action [1, 2].

Pine is a qualitative bioindicator of the environment, so the choice of pine as a bioindicator is not accidental. To assess the state of atmospheric air for many years (2015–2019), we use the bioindicator pine (Pinus sylvestris L.). It is well known that it is a species that responds to pollution. This phytoindicator is widely distributed throughout the North-Eastern part of Kazakhstan, grows both on dry sands and in conditions of excessive humidity. In this regard, pine is a convenient object for bioindication of pollution levels in any area. Reactions of Pinus sylvestris L. to the presence of pollutants in the air reflect the overall level of environmental pollution with chemicals of various types. To assess the chemical load on the plant, its different characteristics are used. The morphological approach is the most common and easiest to implement [3]. In various literature sources as indicative signs it is recommended to use the value of the annual growth of the main shoot, the length of the leaf blade, the size of the generative organs [4]. Morphological and anatomical characteristics ofpine needles can also be used for indicative purposes. According to the authors, pine needles can be used as a bioaccumulator of aerogenic pollution [5, 6]. This is due to the fact that pine needles have the ability to effectively absorb pollutants, in particular, metal compounds, in the form of aerosols due to the diffusion deposition of the latter in the cavities and air channels of the leaf blade.

Recently, data on the growth of woody plants, namely, the study of the growth dynamics of annual shoots and pine needles, have been used more often for quantitative assessments of the anthropogenic environmental impact [7].

Our research was aimed at understanding the nature of the growth and development of pine (Pinus syl- vestris L.) due to air pollution. In the spring of 2019, we began a study of the growth and development of Scots pine in the conditions of the Irtysh region of the Semipalatinsk region. The study was carried out at certain test sites (№ 1, 2, 3). Site № 1, the area of the Silicate Plant (experimental site, Semey N 50.468442, E 80.212024) is considered the most polluted. According to the data of the stationary observation network, the level of air pollution in the city is characterized as a high level of pollution, it is determined by the values of highest repeatability = 21 % (high level) and SI equal to 3 (high level) for phenol in the area of post № 4 (343 district, the area of the Silicate Plant 13/2) [8, 9].

Two areas (control site № 2, 3) were laid in a pine forest, they were located at a distance of 35 km (control plot, the area of the village of Kashtak, N 50.3983; E 80.6248) and 60 km from the sources of pollution along the Borodulikha highway (control plot, the area with Borodulikha, N 50.7336, E 80.8865). There are no large industrial facilities near the control plots, therefore, these research points were chosen. There is no data on air pollution in these areas. 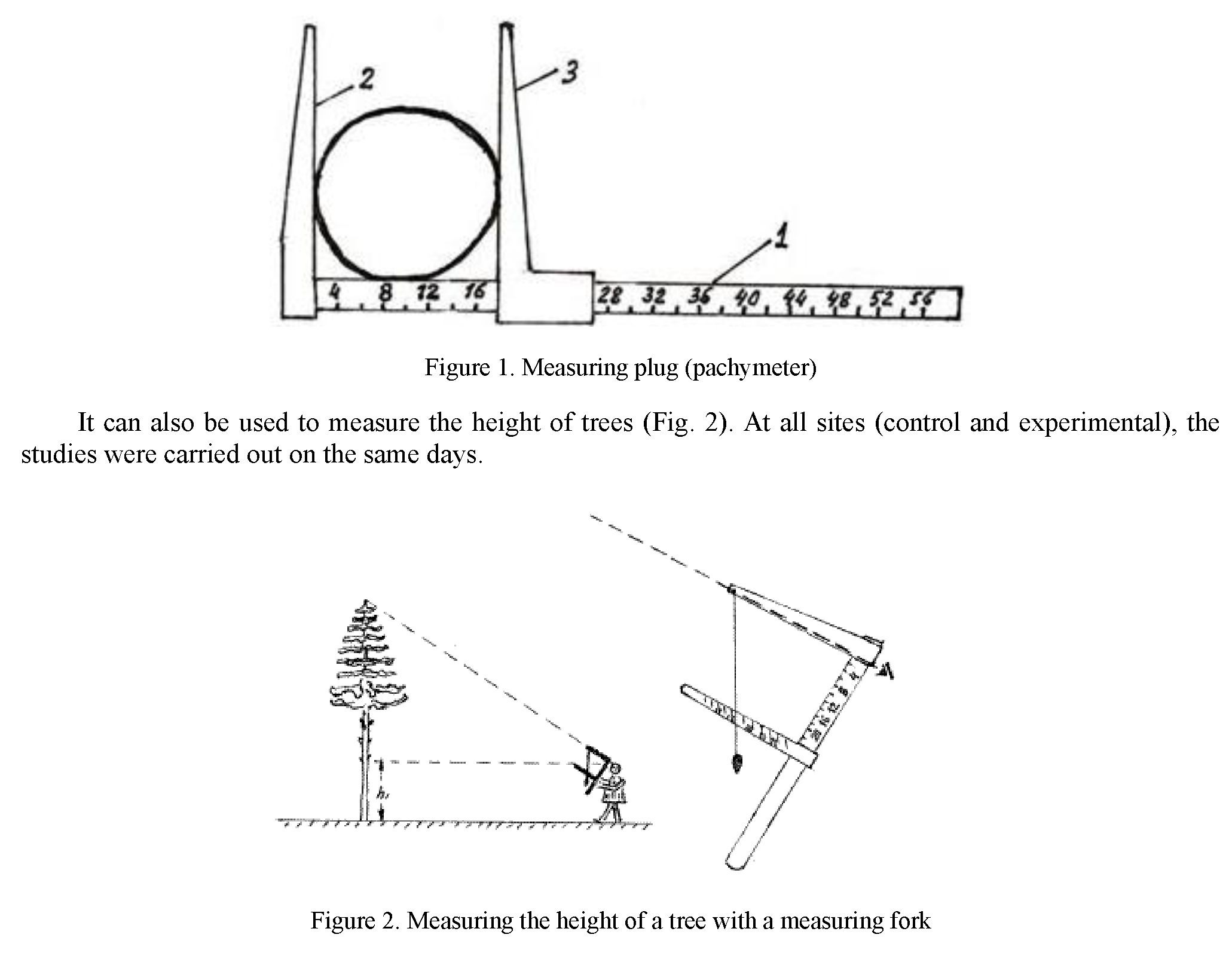 For the study, we selected trees aged 25–30 years, height 6–9 meters, diameter 24–36 cm. The measurement was carried out with a measuring fork (pachymeter). The measuring fork serves to measure the diameters of the trunks of trees (Fig. 1) [10].

The influence of gas pollution on the growth and development of pine was studied by measuring the annual growth of shoots. For this purpose, took shoots in the middle part of the crown (repeatability 5 — fold, and in some cases 10 — fold).

A comparative study of the annual growth showed that the value of the growth of shoots in experimental plants is less than in control plants (Table 1).

Among the control plants, the highest growth was found in model pine trees growing on the territory of the pine forest control area of the Borodulikha village, GPS coordinates: N 50.7336, E 80.8865 (plot number 2). Length of annual shoot growth of trees on this site in different years varies from 8 to 11.5 cm (p ˂0.05) while the second control section, the area of the village Kashtak (section № 3), the GPS coordinates: N 50.3983, E 80.6248 shoot growth of trees from 8.4 to 11.5 cm (p ˂0.05), and the smallest shoot growth shows experimental plot area Silicate plant, the GPS coordinates N 50.468442, E 80.212024 from 7.3 to 9.7 cm. According to the data, given in table 1, we can say that as the degree of anthropogenic load increases, the length of the shoot of pine decreases. Thus, from the data obtained, it can be determined that the ordinary pine has not completely lost its ability to respond to changes in external conditions, and also that the pine has morpho-metric limits of viability, which also depend on the external load.

Terms of growth of shoots and needles of Pinus sylvestris L.

The analysis of phenological data shows that under the influence of industrial pollution of the atmosphere, the annual growth of the pine tree is slowed down.

In the conditions of Semey of Irtysh, the growth of shoots of common pine begins on May, 10–12, and ends in mid-July. 10–15 days after the start of shoot growth, the beginning of the growth of needles is noted. The maximum duration of shoot growth is 64 days, needles 68 days.

A comparative study of the growth of shoots and needles by season showed that atmospheric pollution has a certain impact on the seasonal development of vegetative organs.

The work of a number of researchers indicates the effect of gas contamination on the anatomical and morphological structure of leaves of woody plants [1, 2].

In this regard, we conducted a quantitative and qualitative study of the morphological and anatomical changes in the needles of common pine growing on the territory of the city of Semey (experimental plots № 1, Silicate Plant area) and pine forest (control plots № 2, Kashtak village, № 3, Borodulikha village).

Needles for study were selected from year to year from the middle part of the crown, from various branches. Studying the length of the needles of the experimental and control plants gives a rather distinct characteristic of the changes that occur under the influence of industrial pollution (Table 2).

The growth dynamics of pine needles

Table 2 shows that the inhibition of the growth of needles is directly dependent on the habitat, that is the higher the air pollution, the shorter the length of needles. As for the regions under study as anthropogenic loads, it is possible to observe the duration of survival of needles on a pine tree. Since the needles of model pines were preserved on the experimental site only until 2016, needles were observed mainly in the trees until 2017. In the control areas, needles were preserved for up to 5 years. Some pines could be found needles in 2015. The fall of needles also shows the bio indication properties of pine.

Thus, a fatal decrease in the growth of shoots and needles in the conditions of the Semipalatinsk region is observed in 2015–2019.

Based on these data, we can talk about the presence of morphometric limits of pine viability. Here, it is necessary to indicate that viability can be identified at different levels of the plant organism. However, we single out the morphological limit since the actual complex of physiological reactions of the plant usually finds its total expression in the actual growth rate, a certain orientation of which is ensured primarily by changing external conditions.

Thus, it can be seen from the obtained data that the annual growth of shoots and pine needles in the conditions of gas pollution in the city have not yet completely lost their ability to respond to changes in external conditions. Obviously, if we take the path of reducing harmful emissions, then a certain part of the pine stands can still be preserved. Conversely, if the level of pollution increases, urban pine plantations will die, certain sections of pine forests located near the city, within a radius of 20 km, may suffer, since the strongest impact of technogenic pollution on forest stands occurs on annual growth. Deterioration in the state of annual growth of shoot and pine needles is a sign of instability.