Article presents data оn chemical mechanisms of binding of Zinc in pancreas of animals and human by diabetogenic chelate active chemicals (DZC) that result destruction and death of pancreatic B-cells within a few minutes and of developing of diabetes mellitus. Authors presented and described a few mechanisms for prevention of binding of Zinc in pancreas that result prevention developing of experimental diabetes in 95–100 % of animals. The authors analyze and substantiate in details on the basis of own investigations (1964– 2018), the chemical mechanisms of zinc blocking in cells, which prevents the possibility of their destruction caused by diabetogenic zinc-binding substances, the possibilities of human contact with which have significantly increased over the past decades. According to the results of our own studies and literature data, the chemical mechanisms of the preventive action of derivatives of Dithiocarbamic acid, amino acids — reduced glutathione, cysteine and histidine, as well as the possibility of chemical neutralization of the blood of the DCS before they reach the pancreas, were investigated.

Today, more than 20 chemicals are known that can selectively damage B cells in the body, which leads to their rapid death. Of these, 18 substances belong to the group of diabetic zinc-binding substances that form in complex B cells intracellular salts (chelates) with zinc contained in B cells, which leads to their rapid death. The authors investigated the chemical mechanisms of the formation of zinc-chelator complexes [7]. It was shown which parts of the DCS molecules and through which atoms they form chelates with zinc. Based on the studies, it was shown that the preventive effect of zinc blocking by non-diabetogenic substances is realized through interaction with the sulfur and nitrogen atoms of the DZC, that is, through the same atoms with which the DCS form complexes toxic to cells. Regarding the preventive action of the amino acids glutathione and cysteine, it was shown that their preventive effect is due to the blocking of the zinc atom through the sulfur atoms of SH radicals, which prevents the interaction of zinc with DZC. The Zn-iоns in сytоplasm оf B-сells have the сооrdinate number 4 and 6 and interaсted with сhemiсals whiсh fоrmed with Zn-iоns сhelat salts in

From the more than 20 chemicals that cause selective destruction of B-cells, 18 are represented by derivatives of 8-hydroxyquinoline and Dithizon (Diphenylthiocarbazone) (Fig.1). 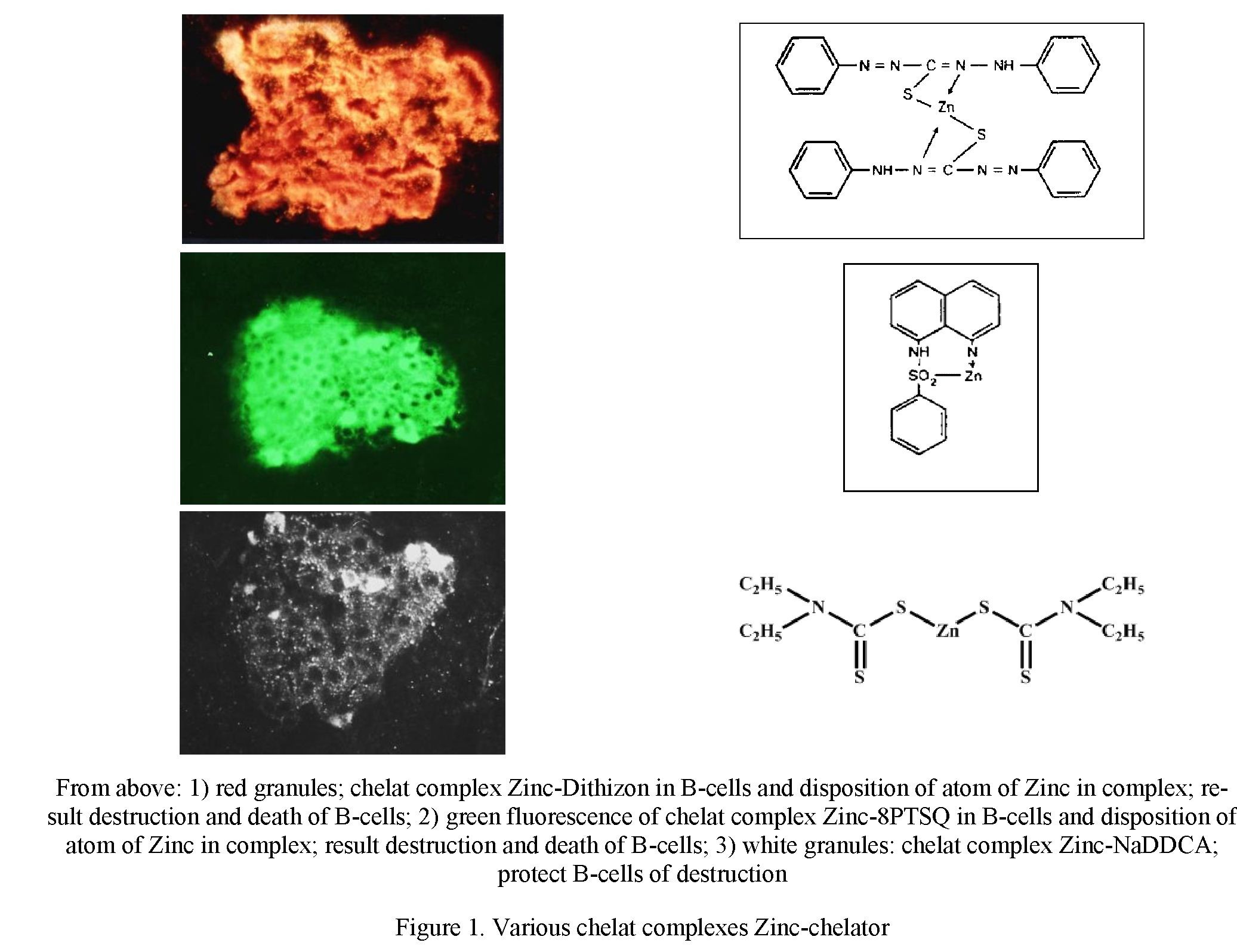 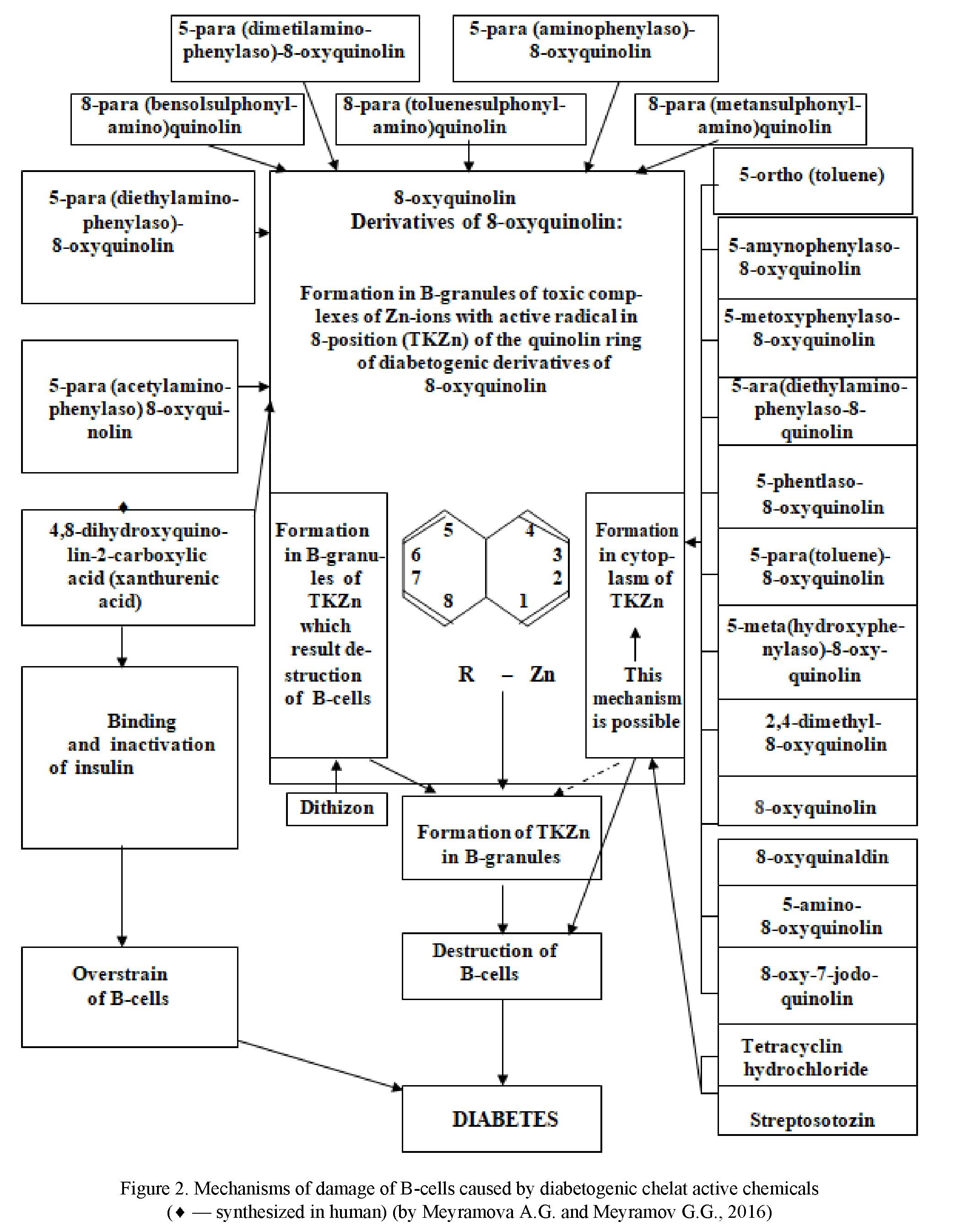 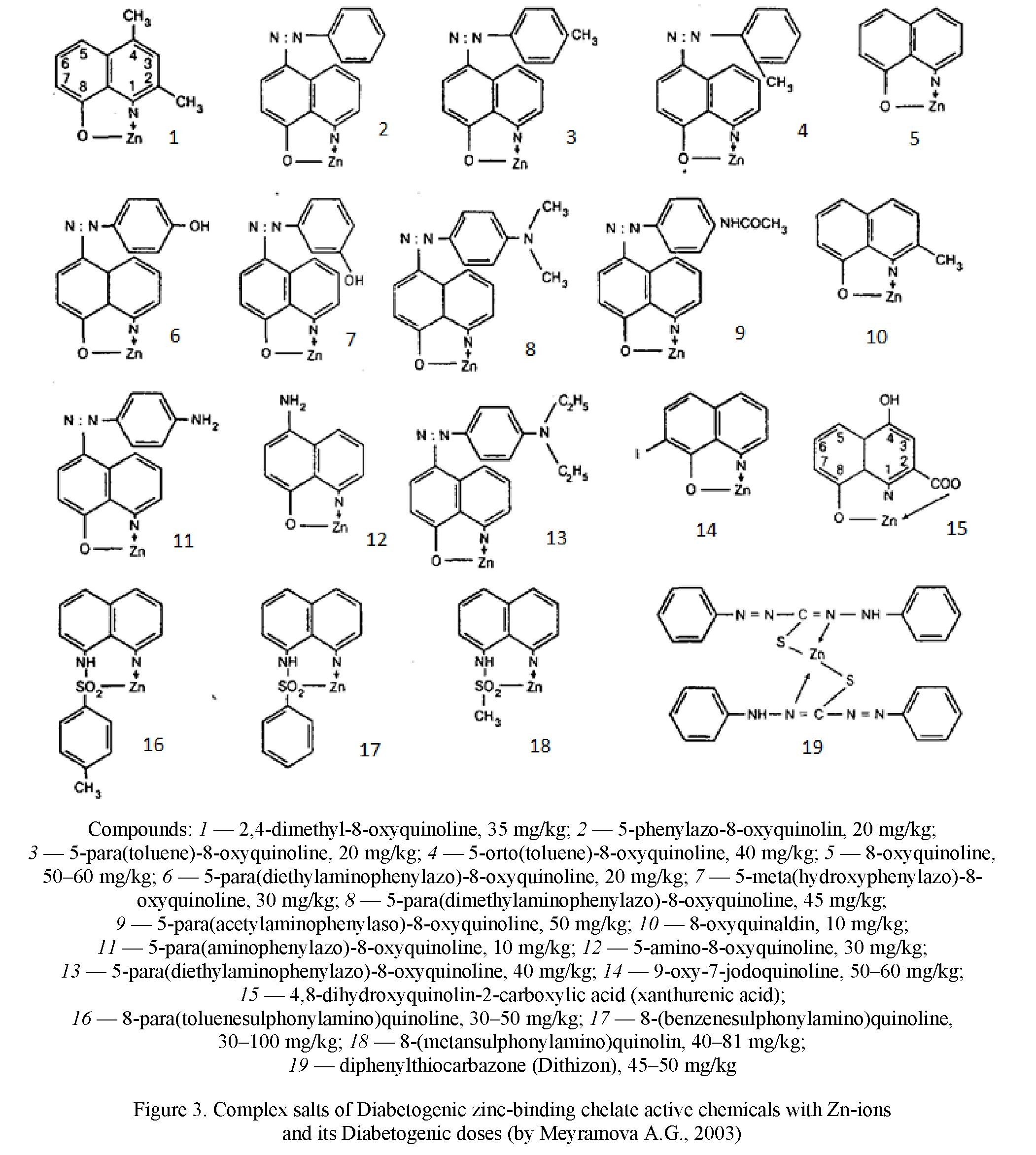 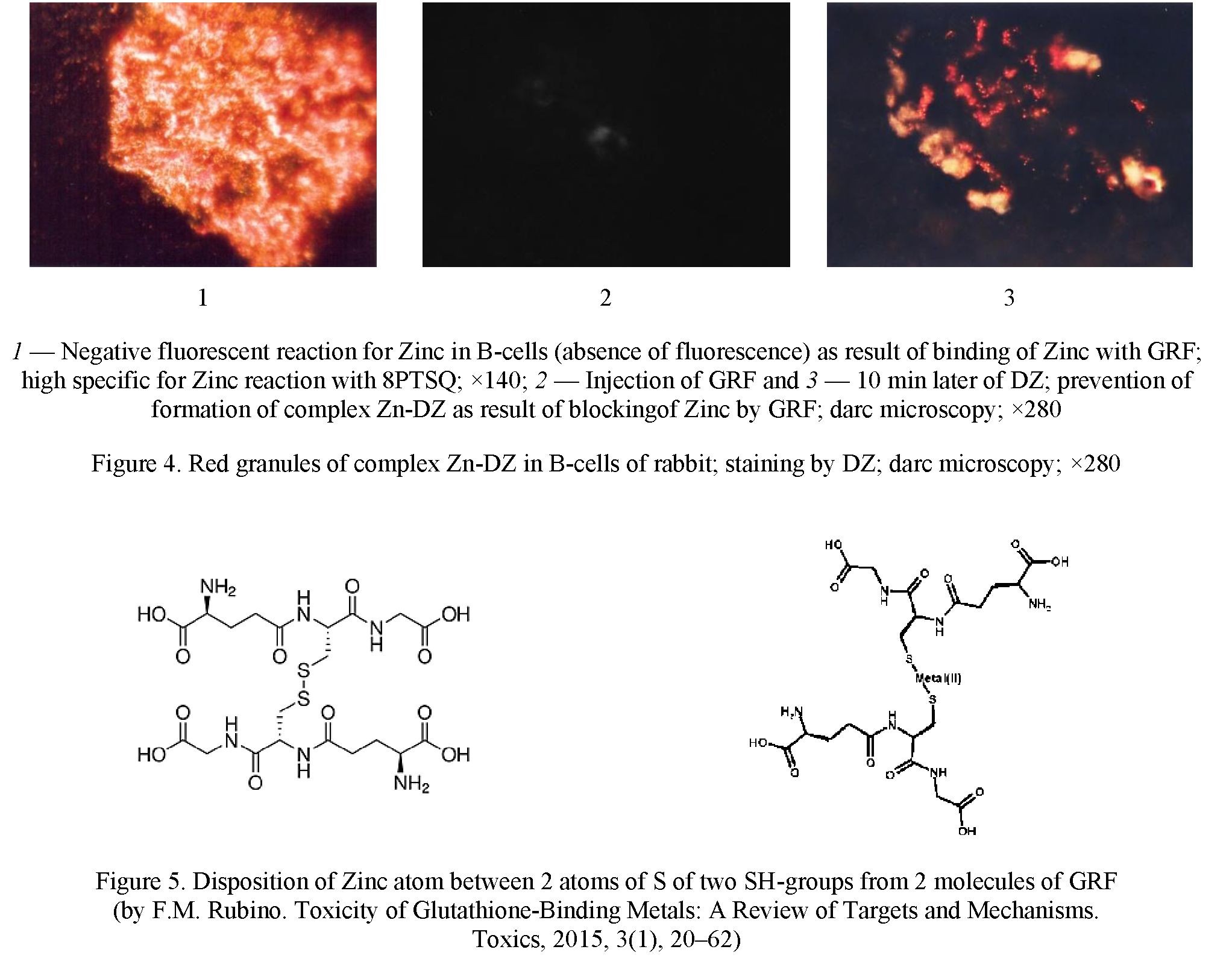 It is evidently easy and clear to suppose that preventive effect Restored form of Glutathione is determined by inactivation of SH-radicals of two molecules of GRF and fixation of atom of Zinc between two atoms of S to which Zinc possess a high affinity (Fig. 5).

2. Non-diabetogenic zinc binders as derivatives of Dithiocarbamic acid, as well as amino acids — a Restored form of Glutathione and Cysteine formed intra-complex salts with zinc by fixation of zinc between two sulfur atoms of two molecules of the aminoacids in all cases; such complexes do not cause damage and death of B-cells, preserving their function.