Lepidopteran fauna of the city of Karaganda

In the article the results of investigation of the species composition of Lepidoptera in city of Karaganda are presented. Studies were conducted in urban parks, squares, courtyards and areas around Karaganda city. Representatives of 11 families, 35 species were identified. The bio indication value of Lepidoptera in monitoring researches is due to their significant role and large biomass in the natural communities, rapid change of the generation, high fecundity and sensitivity to a big number of anthropogenic impact. According to preliminary data, the butterflies of the families Nimphalidae, Satyridae were the most numerous. Background species are Nymphalis urtical L., Melitaea didyma, Hyponephele lycaon Rott. Small and decorating nature species have been identified. In result was made the booklets, which called «Rare and endangered butterflies of the Central Kazakhstan» for the Museum of Nature of E.A. Buketov Karagandа State University. These species must be monitored in the Karaganda city. Refined data on species are pests. Some species are recommended for collecting and training in summer subject schools or at Universities in entomology classes. Further, it is planned to study the distribution of Lepidoptera in the city.

The study of urban fauna is important for the complex assessment of biological diversity, assessment of the current state of faunal complexes and the identification of trends in their future development and variability. The importance of such research is growing in connection with the realization of regional and national sustainable developing programs, as well as global strategies, programs and plans for the conservation and sustainable use of biodiversity.

One of the most important aspects is to study of modern ecological status, especially to the influence of the anthropogenic factor on natural communities [1]. To determine the characteristics of the distribution of fauna in urban ecosystems in different countries, animals of various taxonomic rank are studied.

Lepidoptera are an important part of many terrestrial ecosystems, including urban communities. Representatives of this systematic group have great practical importance for plants, as pollinators. Some species may also be a pest of forestry and agriculture [2]. It is obvious that day butterflies (Lepidoptera) are one of the most noticeable representatives of insects in various natural zones, while many regions of Kazakhstan are not sufficiently studied from an ecological and entomological point of view. The Lepidoptera of Kazakhstan is most studied due to the work of employees of the Institute of Zoology (Almaty city) and Russian specialists [3, 4], but problems remain in identifying the local distribution of species.

It is known that day-flying butterflies — Lepidoptera are a popular object for monitoring the ecological state of the wild. The bio indication value of Lepidoptera in monitoring studies is due to their significant role and large biomass in the natural communities, rapid change of the generation, high fecundity and sensitivity to a big number of anthropogenic impact, and visual visibility [5]. Data on the species composition of Lepidopteran Karaganda have not been published previously. The purpose of this work was to study the species composition and biotopic distribution of Lepidoptera in the city.

The object of study were day-flying insects — Lepidoptera. We used materials from field practices of Karaganda state university's students and our own collections of the authors, conducted in the summer of 2019 in the natural environment and in the urban areas of Karaganda. To determine the species, the key anatomical and morphological characters of the group were studied [6, 7]. Identification was carried out using reference keys [8, 9] and relevant manuals [10]. The dates of collection of adults, as well as the occurrence of other stages of development of Lepidoptera were recorded. Butterflies were taken into account on 1×1 km routes. An approximate transect method was used, modified for monitoring purposes [11]. The total number of routes is 19, the number of registered butterflies is 625.

The study of Lepidoptera was carried out in three sections of the city. Section 1 — the Central Park of the city in Karaganda. Section 2 — the Victory Park (located in the southeast of the city). Section 3 — KSU District (territory adjacent to the Karaganda State University).

The summation of data on routes was carried out using phonological tables [13]. Table 1 presents the option of processing data on families and their representatives, the place of their collection, and the registration period.

Table 1 Registration of observations of Lepidoptera in the city 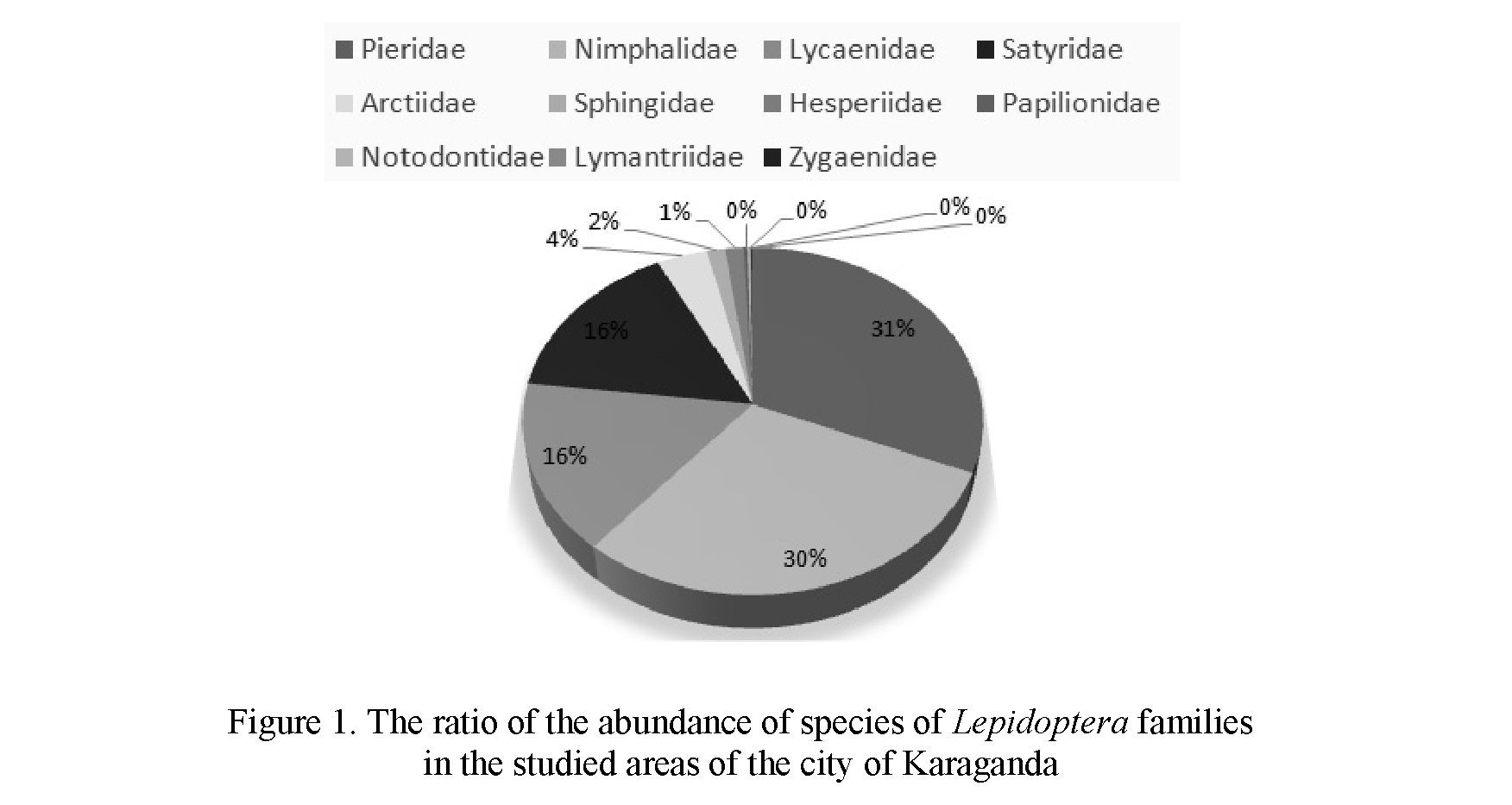 Caterpillars of Aporia crataegimainly damage fruit trees: apple, pear, plum, apricot, as well as hawthorn and some other hardwoods. In the research area, it is usual, even dominates among the occurring whites. The species Colias hiale L. is distinguished by pronounced sexual dimorphism: the male is lemon yellow, the female is yellowish white. Fore wings with black, hind wings with orange spot in the middle; black border of the front wings with bright spots. It is a widespread and common butterfly.

Butterflies of the Nymphalidae family are also characterized by frequent occurrence on route transects (43–48 specimens), which can be associated with a variety of food preferences of the species. Nymphalids feed on nectar of flowers, sugary juice of damaged trees or fruits, and sometimes even liquid manure and other strongly smelling substances. The most noticeable are hives, drafts, parsley and mother of pearl. In parks and lawns of the city, common urticaria Aglais urticae (Linnaeus, 1758) is a large or medium sized butterfly. Caterpillars live on nettles: blackish, more or less covered with yellow-green stripes. In all areas of observation, urticaria fly singly and in pairs [14].

Vanessa cardui L. (Pyrameis) has front wings red, their apical half black with white spots; hind wings somewhat darker with black spots. In May 2019, mass reproduction of the species was noted, especially on flowering shrubs, whereas in other years the butterfly was rare. During the phased flowering of lilac bushes there was a flight of flocks of butterflies from the city to the suburbs [15].

Nymphalis io L. (Vanessa) is a beautiful large butterfly. Caterpillars are black, with frequent white dots and black spikes; they live on nettles, hops, blackberries, raspberries. The butterfly itself prefers to eat on the Cirsium flowers. In the city, mainly single individuals were observed; the abundance was low everywhere.

Admiral butterfly (Vanessa atalanta L. (Pyrameis) is a large bright butterfly. After wintering, it can fly out in April during the warm spring. It met usual in July in the city center [16].

From the second decade of July to the end of August it was noticed in the study area. Butterflies eat on different flowers, prefer Scabiosa ochroleuca, and often sit on the ground. Caterpillars feed plant — cereals from genus Festuca, Stipa, Poa, Sesleria.

Maniola jurtina (Linnaeus, 1758) is widespread. The species is common for the cultural landscape in areas with ruderal vegetation, in pastures. Summer from late June to early August. Forage plants of caterpillars are cereals from genus Roa, Bromus, Festuca, Brachipodium, Milium, Lolium, Alopecurus, Anthoxanthum, and etc.

In the city, closer to the country house, it is possible to observe the large-eyed small-Hyponephele lycaon (Rottemburg, 1775). Caterpillars live on bluegrass and other cereals. The number of marigolds on the transect is 30–36 individuals.

Papilio machaon L. is a butterfly of the family Papilionidae, is protected in many European countries. The species was registered by the authors within the city, but gravitates to suburban areas and gardens. Caterpillars of butterflies are found on flowering umbrellas — dill, carrots.

Hesperia comma (Linnaeus, 1758) is a species of the Hesperiidae family. Butterflies fly from mid-July to mid-August. Adult nutrition is noted on the flowers of Trifolium, Prunella, Solidago dahurica. Caterpillar fodder plants are Coronilla varia, Elytrigia sp., Festuca sp., Holcus sp., Lotus sp, Poa sp. The species disappears with continuous mowing, overgrazing, and strong trampling of meadows. It is included in the Red Books of a number of European countries (2–4 category) [17]. The study area was a common species with moderate occurrence in dry areas along the outskirts of the city.

Arctia caja L. from the Arctiidae family lives in gardens, urban wastelands and other open places. The feed plant of caterpillars is a variety of undersized plants (like plantain and dandelion). Shaggy caterpillars with light shaggy warts. Butterflies fly in July and August, often can be caught in the light. The area is ubiquitous. The number of individuals in some years is high with an abundance of plantain and dandelion.

From Sphingidae family, the wide spreads is the Hyles euphorbiae, flies in May and June and is seen in various garden flowers and in various species of Euphorbia. Rare species in the city on flowering plants is Macroglossum stellatarum. The species is capable of long-distance migrations; we have it from the beginning of May to the end of October and, possibly, represent two migrating generations. Caterpillars develop on bedstands and sprockets.

Thus, during the observation period, 625 Lepidopteran specimens belonging to 35 species and 11 families were registered in the landscape gardening zone of the city. All identified species are representatives of the European-Siberian fauna. Background species belong to the families of Pieridae (5 genera, 7 species) and Satyridae (6 genera, 6 species). According to preliminary data, they need protection: Hesperia comma and a Papilio machaon (as species listed in the Red Books of European states and neighboring countries).

Almost all butterflies are pollinators of plants, wild-growing and cultivated, provide seed sets for many species; occupy a certain ecological niche. This is one of the most important values of their stay in urban ecosystems. Many butterflies are quite beautiful, and the aesthetic perception of the world around people is important, especially when relaxing in gardens, parks, squares and boulevards.

One of the results of many years of work by specialists of the Department of Zoology in KSU is to study the species diversity of butterflies in Karaganda was the site butterflies.kz — Butterflies [17], which contains partial materials about the lepidopteran region. Further work is required for a comparative study of the biotopic distribution of Lepidoptera and changes in the fauna during urban processes.