Results of study of wild medicinal plants of Mangystau region

The study of medicinal plants in the flora of the Mangystau region was the practical interest in assessing the full species composition and prospects for the use of raw materials for the medical and pharmaceutical industries. During 2013–2020, field surveys were carried out to identify the species composition of medicinal plants, their ranking, raw materials and the characteristics of the passage of the main phases of vegetation. The article presents the results of the analysis of the species composition of wild medicinal plants in the natural conditions of Mangystau and their ranking. As a result, the list of medicinal plants amounted to 166 species from 112 genera and 43 families. The predominant number of species is assigned to the families Asteraceae, Chenopodiaceae, Fabaceae, Brassicaceae, Lamiaceae, Apiaceae, Scrophulariaceae, Boraginaceae, Euphorbiaceae and Ranunculaceae. The largest part of medicinal plants is assigned to species used in folk medicine — 144 species; pharmacological properties were found for 50 species; 36 species are included in the Pharmacopoeia of the Republic of Kazakhstan. All plants species were ranked into 10 groups of pharmaceutical-therapeutic activity against different diseases: gastrointestinal tract, oral cavity, kidneys and urinary tract, respiratory tract, antipyretic and anti-inflammatory, cardiovascular system, diabetes melli- tus, analgesic and wound healing, skin organs, other diseases. There was performed ranking of medicinal plant species into 4 groups by degree of distribution, area of thickets and possibility of stock collection of vegetal raw materials. A collection calendar has been compiled for 166 species of medicinal plants in the flora of the Mangystau region. The obtained data can be used for organization of systematic harvesting of vegetal raw materials and development of environmental measures.

Biodiversity conservation is an important component of bio preservation. In addition to the Convention on Biodiversity (1992), which focuses on the conservation, study and protection of biological diversity as a guarantor of ecosystem sustainability, the Global Plant Conservation Strategy (2002) was adopted at the 6th Conference of the Parties to the Convention [1]. At the same time, it is recommended to develop regional and national plant conservation strategies that take into account the specificities of the regions. Therefore, the current task of botany is a comprehensive study of individual groups and species of useful plants for their economic use. Studying and obtaining a complete botanical resource characteristic for each raw material plant is the basis for the development of a scientifically based regime for the use of economically valuable plants that exclude the degradation of their populations or the destruction of species. The whole complex of research is most concerned with wild beneficial plants, widely used in the national economy and medicine [2].

Despite significant advances in medicine in recent decades, according to WHO; approximately 80 % of the world's population, about 4 billion people, use medicinal plants to treat various diseases [16–19]. Medicinal raw materials attract people with their complex action, low cost, lack of side effects and low cost. Therefore, the introduction of local flora into the practical use of medicinal plants is an urgent task in the Republic of Kazakhstan.

The purpose of the present study is to summarize the results of the study of medicinal plants in the natural flora in the Mangystau region.

The objects of the study were wild medicinal plants of the Mangystau region (the Western Kazakhstan). Detection of medicinal species is performed on the basis of literature data [16–18, 20–23]. The search for medicinal plants was carried out by route reconnaissance and semi-stationary methods (2013–2020). The collection of herbarium and reproductive material of medicinal plants was carried out during expeditionary trips to Mangystau. The definition of species is made according to the generally accepted determinants [24, 25], the clarification of Latin names — according to S.K. Czerepanov [26]. The identified medicinal plants are ranked in 4 categories by the degree of prevalence, area of thickets and possible reserves of plant raw materials: 1) with a wide habitat, forming significant natural thickets and suitable for industrial harvesting of raw materials; 2) with a wide habitat, forming small natural thickets and suitable for the preparation of raw materials for the needs of the local pharmacy chain; 3) species having a wide habitat, however, growing sporadically and not forming natural thickets suitable for collecting raw materials; and 4) species with conservation status, that is, rare, endangered and endemic.

Species were ranked by use in scientific, official and folk medicine, as well as by manifested pharmacological properties based on literary data [16–23].

The determination of resources in communities was carried out by the method of accounting sites. The size of the accounting site was 1 m2, the number of them was laid from 30 to 50 [27]. The territory of the thickets was reduced to any geometric figure, its sides were measured, and the area was calculated. The production reserve of raw materials of above-ground mass was calculated by multiplying the yield of raw materials by the area of thicket. The volume of possible harvests was calculated in the amount of 30–50 % of the exploitation stock, based on the biological characteristics of species and the state of populations; underground organs — in the amount of 10–20 % of the exploitation reserve.

Compilation of collection calendar was carried out on the basis of analysis of vegetation phases and recommendations on gathering of raw materials of medicinal plants [28].

Mangystau region is located in the west of the Republic of Kazakhstan, in the desert zone. The territory includes the Mangyshlak Peninsula, the Ustyurt Plateau, the Buzachi and Tub-Karagan Peninsula, the Dead Kultuk and Kaidak sors. From the west, northwest and southwest it is washed by the waters of the Caspian Sea and is located between N 45 and 42°. In the north and northeast it borders with the Atyrau and Aktobe regions, in the east with Uzbekistan, and in the south with Turkmenistan (Kara-Bugaz-Gol Bay). The territory of the region has an area of 165.6 thousand square meters (16 million ha) and belongs to the desert zone [29, 30].

Most of the region's territory is occupied by wormwood-salt-marsh desert with areas of shrub vegetation on brown soils: the surface is partially covered with salt marshes, takyr salty soils and sands with extremely rare vegetation. The climate is sharply-continental, extremely arid. The average January temperature is –7 ºC, July +27 ºC (on some days the maximum temperature exceeds +40 ºC). The annual rainfall is about 100–150 mm.

Based on the analysis of literary sources and the results of own field studies, the most complete list of medicinal plants of the Mangystau region was compiled. Based on the taxonomic analysis of the above list, it was revealed that 166 species from 112 genera and 43 families grow on the territory of Mangystau (Table 1).

From 166 identified species of medicinal plants, the largest part belongs to species used in folk medicine (Fig. 1) — 144 taxa. For 50 species are determined some pharmacological properties. A small number of species (36 taxa) are used in official medicine.

Medicinal plants have a wide range of pharmacological activity. However, different properties are inherent in a different number of species. We have analyzed the possibility of using Mangystau medicinal plants to treat various diseases (Fig. 2).

So, for the treatment of diseases of the gastrointestinal tract, 78 species of medicinal plants can be used, such as Falcaria vulgaris, Ferula foetida, Inula britanica, Koelpinia, and etc. For the treatment of diseases of the oral cavity, 18 species can be used: Ferula karelinii, Cichorium intybus, Chenopodium alba, Limonium gmelinii, Capparis spinosa, and etc. Against diseases of the kidneys and urinary tract, the use of 36 species is recommended: Amaranthus retroflexus, Eryngium planum, Cardaria draba, Echinops ritro and others.

34 species have wound healing and analgesic properties, including Chenopodium alba, Ephedra aurantiaca, Ephedra distachya and others. Skin diseases can be treated with 34 types: Ferula foetida, Acroptilon repens, Anabasis aphylla, Camphorosma lessingii and others. Other pharmacological properties are noted in 104 species.

Species growing in the Mangystau region are not equivalent in the prevalence, area and density of growth formed by raw materials. In this regard, some species can be taken from nature in significant volumes

and used by humans, others — in a limited amount, others — are not subject to removal from nature for any reason. In this regard, according to the results of field studies, all identified wild medicinal plants were divided into 4 categories by the degree of prevalence, area of thickets and the possibility of stock collection of plant raw materials:

When planning complex or single procurement measures, one of the necessary conditions is knowledge of the exact dates, phases and periods of collection of medicinal vegetative raw materials. We conducted the rhythms of development of medicinal plants, which made it possible to compile a calendar of optimal dates for collecting above-ground and underground organs for a number of medicinal species in the Mangystau region.

The results of the analysis of the collection calendar made it possible to determine that 9 types of raw materials can be harvested in Mangystau: grass, leaves, inflorescences, roots and rhizomes, shoots, bulbs, bark, seeds, juice and fruits (Table 3). 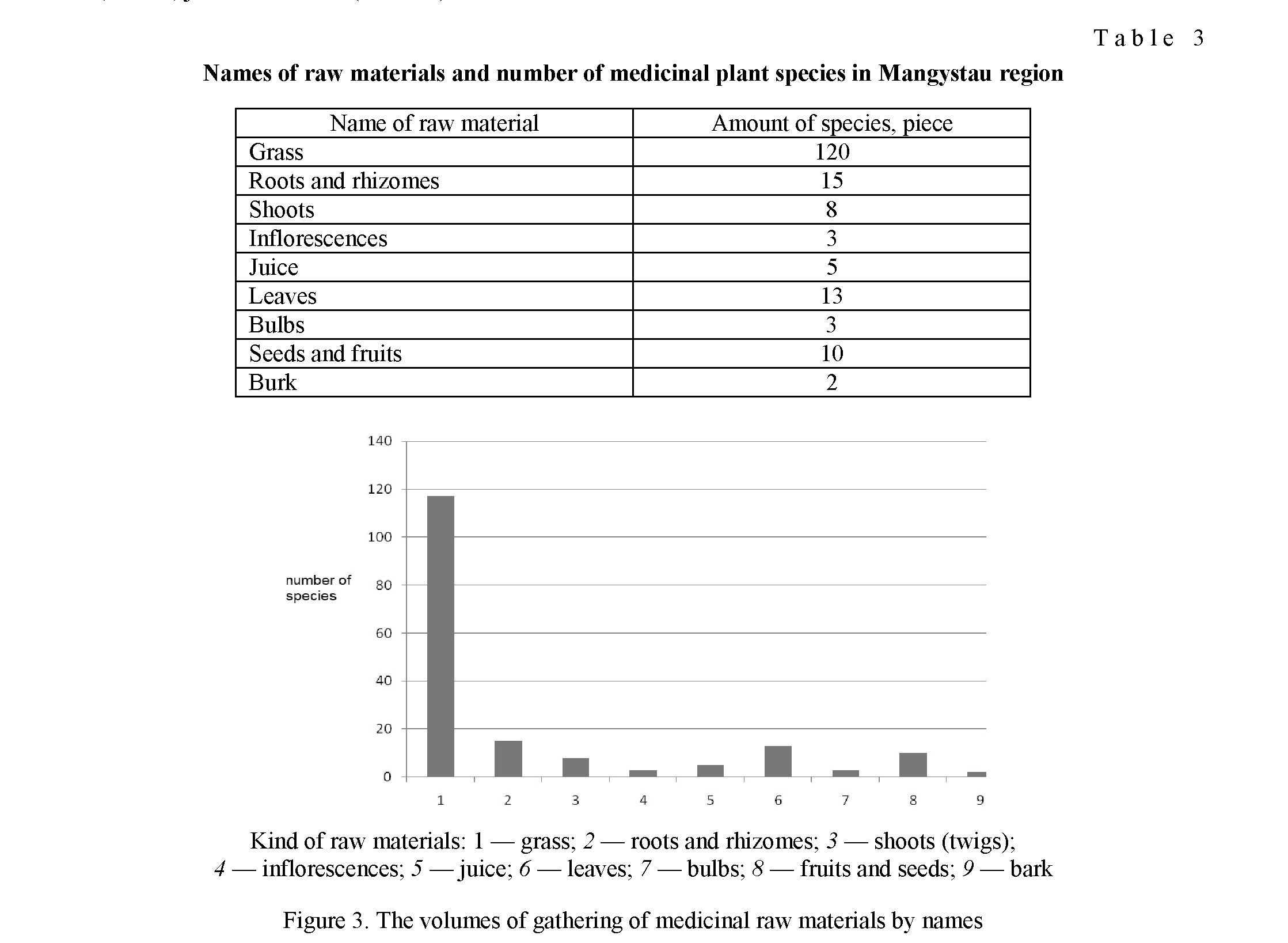 As a result, the species of medicinal plants we divided into groups on the frequency of collection during the growing season (Tab. 4).

Thus, of the 166 identified species of medicinal plants in the Mangystau flora, the largest part belongs to the species used in folk medicine — 144 taxa. Slightly fewer species for which some pharmacological properties have been found — 50 species; 36 species are included in the Pharmacopoeia of the Republic of Kazakhstan. All species were ranked into 10 groups of pharmaceutical-therapeutic activity for use in the treatment of diseases: gastrointestinal tract, oral cavity, kidneys and urinary tract, respiratory tract, antipyretic and anti-inflammatory, cardiovascular system, diabetes mellitus, analgesic and wound healing, skin organs, other diseases.

The gathering calendar has been compiled for 166 species of medicinal plants in the flora of the Mangystau region. The obtained data can be used for organization of systematic harvesting of vegetal raw materials and development of environmental measures.

The research was carried out within the framework of earmarked funding programme «Development of scientific, practical and computer-informational foundations for the creation of landscape-collection and garden-park plantations in the desert zone of Mangystau for the conservation and rational use of plant biodiver- sity».