In Kazakhstan, in the process of transition the education to updated content, there is a problem of providing biology classes with the necessary materials in English. At the school and university level, there is a lack of textbooks, manuals and trilingual dictionaries on Biology. This aspect does not allow to learn successfully biology in English, to understand translation of terms, to translate in English. In present article materials on studying of application's efficiency of the using trilingual dictionary (English-Russian-Kazakh, Russian- Kazakh-English and Kazakh-English-Russian) in senior high school are stated. The effectiveness of the trilingual dictionary on zoology in additional Biology classes in English was evaluated. The results of the studies show that the application of the trilingual dictionary in Biology lessons reliably increases the level of understanding of specialized texts and translation of scientific materials. The use of the dictionary on zoology increases the efficiency of translation from English to Russian and from Russian to English, reduces the time required for translation.

One of the most important aspects of economic and social modernization of education system, taking place in Kazakh society, is language policy [1, 2]. Within the framework of this program it is assumed that school disciplines of the natural science cycle, such as Physics, Biology, Chemistry and Information and Communication Technologies (here in after ICT) should be taught in high school in English [2, 3].

An analysis of the material provision of schools indicates that there is a shortage of additional materials to ensure English-language classes. One of problems is the lack of specialized dictionaries and glossaries on Biology, Physics, Chemistry and ICT [4–6].

Teaching English at school is aimed at achieving general communication skills and competencies, however, does not cover the needs of specialized areas of natural science subjects. In addition, many terms (compound, connection, bond, equilibrium and others) in physics, chemistry or biology have different definitions [5].

There is a problem as the need to ensure simultaneous understanding of terms in 3 languages (Kazakh, Russian and English) in order to be able to freely navigate in text, video or audio information [7, 8].

Today, Kazakhstan is creating bilingual and trilingual dictionaries on separate disciplines of higher education [9]. Thus, there are trilingual glossaries and terminology dictionaries on Common Physics, Higher Mathematics, Organic Chemistry, Botany, Ecology and the Base of Invertebrate Zoology. However, these dictionaries are not easily accessible to a wide audience; also they are not suitable for school disciplines [5, 10].

Thus, we face the problem of creating and testing a trilingual dictionary on the school course of Biology.

Proceeding from the aforesaid, the purpose of this article is to carry out approbation of the trilingual dictionary on Zoology on additional classes in Biology on English on example of senior high school.

The main research was carried out on the basis of Karaganda regional specialized boarding school «Daryn» in 2019–2020.

The experiment was conducted with two mixed groups from the 9th grades, the total number of respondents — 20 people. 10 school-students are the control group, and 10 school-students are the experimental group. The control group received texts on Zoology of 500–600 words for translation without a dictionary, experimental — using a trilingual dictionary on Zoology [11, 12]. For translation from English to Russian we used tree texts: 1) Cells and Protoplasts; 2) Protozoa. Amoeba; 3) Crayfish. For translation from Russian to English we also used tree texts: 1) Earthworm; 2) Frog; 3) Structure of insects. Еhe texts describe the cell and its main parts, the structure, distribution and features of animal habitation.

-The accuracy of the translation (high, medium, low) by assessing the general meaning and correctness of the use of terms (Tab. 1);

-The school-students met the deadline during translation — 20 minutes (yes, no).

Table 1 Criteria for assessment of the accuracy of the translation

After two tasks each school-student of control group noted the frequency of using the dictionary: 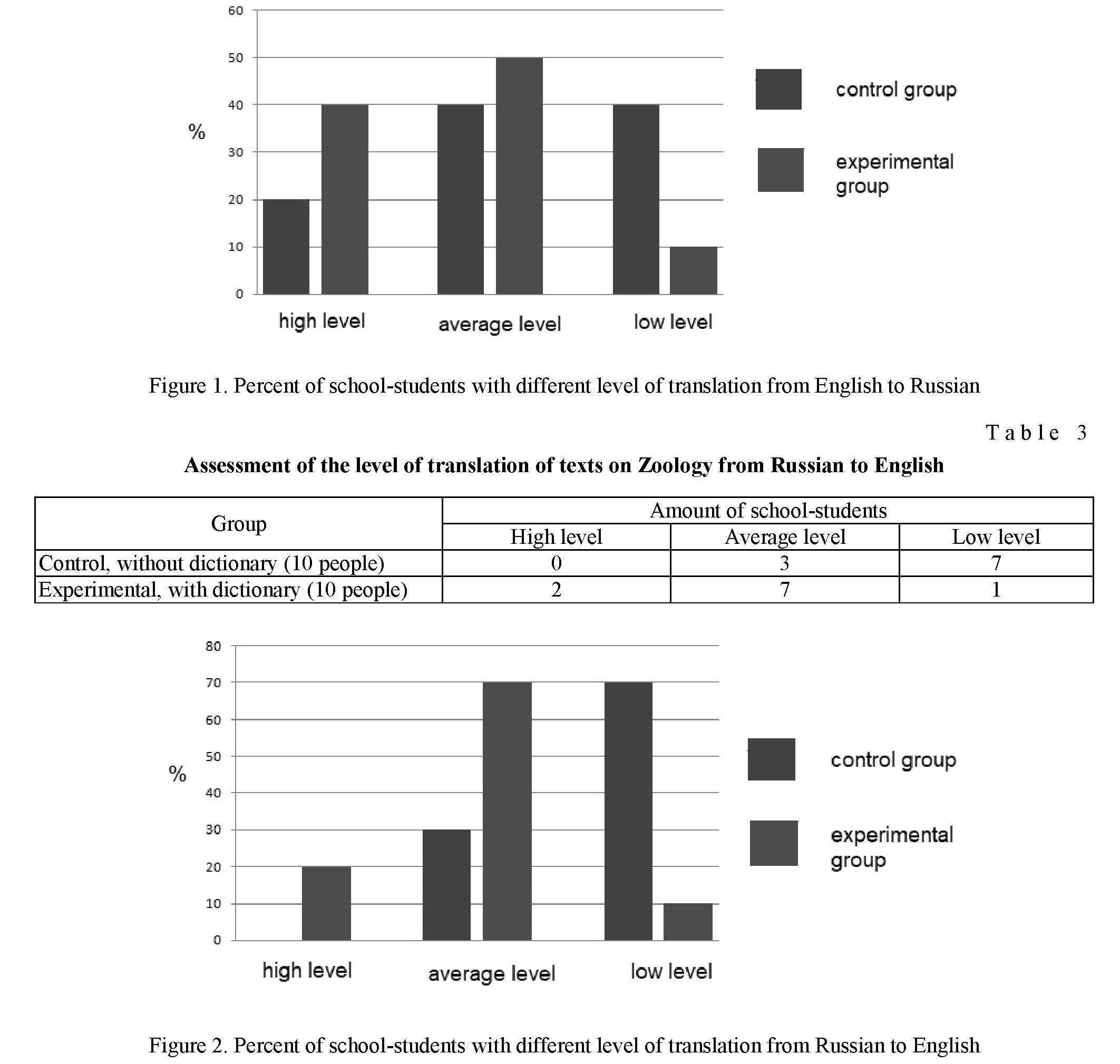 That is we observed a reliable difference between control and experimental group. So, at the translations from English into Russian the control group was distributed as follows: 20 % with high level, 40 % with average and 40 % with low level. At the translation from Russian into English made distribution: high level — 0 %, average — 30 %, low — 70 %.

In experimental group at the translation from English for the Russian 40 % of pupils showed high level, 50 % — average and only 10 % — low. It was on 20; 10 and 30 % higher than similar indicators of control group. At the translation from Russian into English the share with high level made 20 %, with average level 70 % and with low level 10 %. These data exceeded similar results of control group on 20; 40 and 60 %, respectively.

All school-students noted, as was confirmed with results of an experiment that it is easier to do the translation from English into Russian, than to translate from Russian into English.

Analysis of the obtained data shows that 8 school-students in the control group completed task in time during translating from English to Russian, and two pupils took longer. In the experimental group 9 schoolstudents completed in time, and only one school-student took more than 20 minutes for translation.

In conclusion, we analyzed the frequency of using the dictionary for the experimental group (Table 5).

Table 5 Frequency of using terms when translating texts on Zoology

Thus, results of researches show that application of the trilingual dictionary at lessons of Biology might help with understanding of specialized texts and the translation of scientific texts.

The introduction of the program of trilingual education at all levels of the education in the Republic of Kazakhstan implies the development of the system of education of subjects of the natural scientific cycle, including Biology in English. One of the problems of educational institutions is the lack of a proper level of knowledge of English, especially specialized terminology.

Based on the above, there is a need to conduct research on the organization of Biology education in English using various teaching tools, including trilingual terminology dictionaries and glossaries.

The effectiveness of the trilingual dictionary on Zoology in additional biology classes in English was evaluated. The results of the studies show that the application of the trilingual dictionary in Biology lessons reliably increases the level of understanding of specialized texts and translation of scientific materials. Use of the dictionary on zoology increases the efficiency of translation from English to Russian on 20 % with high level, 40 % with average level and 40 % with low level. At the translation from Russian into English the efficiency of translation was the following: high level — 0 %, average level — 30 %, low level — 70 %.

The research was carried out within the framework of the grant project of the Ministry of Education and Science of Kazakhstan «Creation of a trilingual dictionary of biological terms with a linguo- culturological component».