Biological oxidation of ferrous sulfate by Acidithiobacillus ferrooxidans and Acidithiobacillus ferrivoransis an important process in the bioleaching of minerals and the treatment of acid mine drainage. The rate at which biooxidation reactions take place is directly related to the microorganisms'growth temperature. Decreasing the temperature of reaction causes both a decrease on the chemical reactions rates and a decrease on bacterial growth. In this study, the effects of pH and temperatures on oxidation of ferrous sulfate by a native At. ferrooxidans and At. ferrivorans strains were investigated. The biooxidation tests conducted in shake flasks at 28 °C and 8 °C and at initial pH 1.6 for 5 days. During the experiment, the mesophilic iron oxidizers were capable of growing on ferrous iron at concentrations of 4.5 g/L at low and optimum temperature. However, the rate of mesophilic biooxidation of ferrous iron was higher than that observed in the psychrophilic biooxidation. In conclusion, during the experiment the At. ferrivorans strain 535 showed high activity in oxidizing at low temperature than other strains. It means even at very low temperatures, microorganisms play an important role in the oxidation and leaching of sulphide ores.

Bioleaching is extraction of valuable metals from their ores using microorganisms. It as environmentally friendly technology offers an alternative to traditional pyrometallurgical methods [1]. There are two mechanisms for bioleaching of sulphideminerals: the direct and the indirect. In the direct mechanism, microorganisms situated at the mineral surface and dissolve metal ions. In the indirect mechanism, metal sulfides are chemically attacked by ferric iron, which is oxidized to sulfuric acid [2, 3]. Biooxidation of ferrous iron wereproven to be anessential step in bioleaching [4, 5]. Due to their importance in the bioleaching of sulfide minerals, the oxidative activity of chemolithotrophic microorganisms such as archaea and bacteria in a mesophilic and cold environments as well as moderately high and extremely high temperatures has been widely studied. Microorganisms have been frequently isolated from sulphide minerals in dumps, heaps and from flotation tailings are Acidithiobacillus ferrooxidans, Acidithiobacillus thiooxidans, Acidithiobacillus ferrivorans, etc. [6–9]. Flotation tailings are one of the largest mining wastes from sulphide minerals concentrated by pyrometallurgical process generated during the flotation process. In Kazakhstan over 22 billion tons of waste, of which more than 16 billion tons of mining and processing waste, about 6 billion tons of hazardous waste has been accumulated [10–14]. Thus, in order to reduce the health risk arising from the heavy metals such as arsenic, lead, and chromium it is necessary to develop strategies that could reduce toxicity. In this aspect, biogeotechnology, which is based on the natural ability of chemolithotrophic bacteria (At. ferrivorans, At.ferrooxidans, At.thiooxidans, etc.) is of great help to utilize either ex-situ or in-situ bioremediation of heavy metal polluted sites.The kinetics of mesophilic biooxidation of ferrous iron has been studied in our previous work [9].

The mesophilic iron oxidizers used in this study were 535 strain of At. ferrivoransand strains FT-2, FT-3 and 377 of At. ferrooxidanswhich was been previously isolated from gold deposits by our laboratory. The microorganisms were grown on a modified medium 9K-Fe containing (in grams per liter): KH2PO4 (3.0), MgSO4·7H2O (0.5), (NH4)2SO4 (3.0), KCl (0.1), Ca(NO3)2 (0.01). The medium also supplemented with filter-sterilized FeSO4·7H2O (22.1). The cultures of At. ferrivorans and At. ferrooxidans were incubated in 750 mL Erlenmeyer flasks each containing 200 mL of the medium and 10 % (v/v) inoculumon a shakerincubator at 200 rpm at a temperature of 28 °C. The initial pH of the cultures was adjusted to 1.6 at room temperature using 10N H2SO4.

In order to study on ferrous iron biooxidationof different strains at low and optimal temperatures the experiments were realized in 250 mL sterile shake flasks containing 90 mL of the modified medium 9K-Fe (concentrations of ferrous iron was 4.5 kg·m-3) and 10 % (v/v) inoculum. The flasks were incubated on a rotary shaker at 160 rpm and temperatures of 8 ºC and 28 ºC. Samples were taken every day and analyzed for ferrous, total iron concentrations and pH. All the experiments were carried out under sterile conditions.

Results of mesophilic biooxidation of ferrous iron at initial concentration of 4.5 g/L are presented in Figure 1. The biooxidation rate of ferrous iron (Fe2+) to ferric iron (Fe3+) was remarkably increasing in the flasks with microorganisms for 3 days, meantime in un-inoculated flask oxidation of Fe2+ was not happen: due to slow chemical oxidation. Despite added ferrous iron concentration was 4.5 g/L, at the end of the experiment the oxidized ferrous iron concentration was 4.8 g/L. The reason for increasing of the total iron is the added inoculum culture with 9 g/L of iron. The strains 377 and 535 showed the highest activity. Variations of pH over time during the biooxidation process with different bacterial strains at 28 ºC are shown in Figure 2. The pH of the flasks inoculated with At. ferrooxidans FT-2 decreased significantly within the first 3 days of the experiment from pH 1.64 to 1.58. The pH propagation of 535 and FT-3cultures was quite similar. In the flasks with 377, pH was increased from 1.6 to 1.63. Meanwhile the pH did not drop greatly in the control flasks, which were conducted without bacterial inoculation.

In Figure 3 the observed oxidation of Fe2+ to Fe3+ clearly demonstrates the presence in four type of strains growing at 8 ºC and able to oxidize Fe2+ iron at initially pH 1.6. In the flasks with microorganisms, the ferrous iron initially added was rapidly oxidized to Fe3+ after only 5 days. The A. ferrooxidans FT-2 strain showed the highest activity which was demonstrated by an increase of Fe3+ in solution. A small amount of Fe2+ (approximately 1.0 mg/L) was maintained in the media with the strain of A. ferrooxidans FT-3 till the end of the experiment. In the sterile flasks, some chemical oxidation was also obtained after 5 days. Figure 4 illustrates the results of the biooxidation of ferrous iron at initial pH 1.6. The trend of pH variations during biooxidation of Fe2+ to Fe3+ showed that the pH of the flasks with microorganismswas not decreased within the first 5 days of the experiment.

According to this study, these isolated strains of At. ferrooxidans and At. ferrivorans would be psychro tolerant despite the fact that optimum growth temperature is 20–40 °C, they also can grow at 8 °C. However, they cannot be considered psychrophilic, as they showed high growth at 28 °C. Temperature is a significant factor in leaching processes, especially in oxidation processes. Lowering the temperature leads to a significant reduction in the rate of oxidation. The rate of chemical oxidation of sulfide minerals with oxygen at environing temperature is very slow. And a significant oxidation might be observed only in the presence of iron-sulfur oxidizing bacteria. Abandoned mines exposed to atmospheric influences at ambient temperature leads to the formation of acid drainage, which cause environmental pollution. However, the results of this study show that even at a very low temperature (8 ºC), bacterial growth occurs and biological catalysis increases the rate of oxidation. 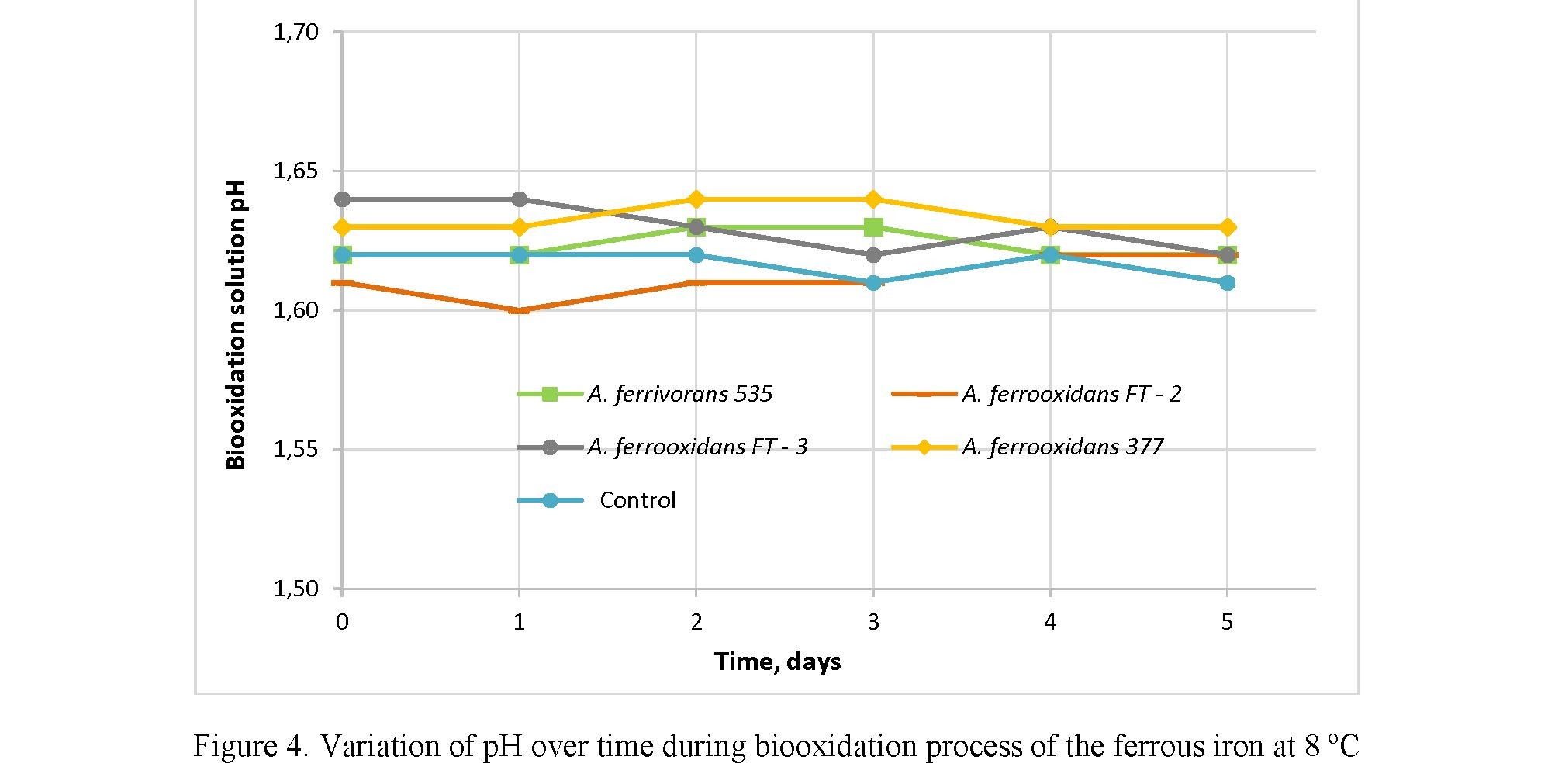 These results of the study are important not only from an environmental point of view but also the possible development biological leaching of low-grade oredeposits located in low-temperature areas.

From the results of the study, it was noted that the selection of bacterial strains to be used for the biooxidation process should depend on temperature of environment. There remains a need for furtherresearch to verify various reactions engaged inpsychrophilic bioleaching of sulphide minerals and to explain the mechanism which dominates this process.

This work was supported by the Science Committee of the Ministry of Education and Science of the Republic of Kazakhstan in the framework of program funding for research (AP05136008).