Nowadays, using plant extracts and infusions as protectors against the impact of heavy metals, the molecular mechanisms, protective and adaptive reactions of plants are studied. The purpose of this article was to study the protective properties of beetroot seeds infusion in acute and sub-acute poisoning of rats with cadmium nitrate. For this experiment, we used 50 male rats. The animals were exposed to Cd nitrate, with an initial weight of 180 ± 30 g. The first groups of rats were injected with cadmium nitrate at a dose of 0.1 g/L intraperitoneally, the second groups received a 0.01 % solution of cadmium nitrate, 1 mL, 5 days a week, orally for 10 and 24 days. General blood tests and biochemical parameters in rats were investigated. By biochemical parameters, we determined liver enzymes alanine aminotransferase (ALT), aspartate aminotransferase (AST), bilirubin, glucose, urea, creatinine, and total protein. The mean ± SEM values were calculated for each group to determine the significance of the intergroup difference. Each parameter was analyzed separately using the one-way analysis of variance (ANOVA) test. To determine the difference between groups, Student's «t»-test was used. Studies showed the presence of variations in the parameters of leukocytes, erythrocytes and platelets depending on the period of days of poisoning and biocorrection. There were small changes in the content of urea, creatinine, and protein, which were not reliably confirmed. As a result, our research allowed asserting that the use of Beta vulgaris infusion in acute and subacute experiments with poisoning of animals with cadmium nitrate had a positive hepatoprotective effect.

Heavy metals have not been a problem as long as they are components of our environment at a balanced level, but human activities towards modern life and industrialization have increased the distribution of heavy metals and their bioavailability [1]. Industrial waste and wastewater manufacture, mining and metallurgy, energy and fuel production, vehicle emissions and agricultural fertilization are some of the most important human activities leading to increased environmental pollution by heavy metals [2].

Cadmium is one of the most toxic heavy metals, the availability and biological concentrations of which have increased in recent decades due to various types of human activities [3]. Chronic exposure to cadmium can have side effects such as lung cancer, lung adenocarcinomas, proliferative lesions of the prostate, bone fractures, kidney dysfunction and hypertension [4]. Cadmium is a heavy metal, belongs to the second class of hazard, and has a pronounced tendency to accumulate in the body. Cadmium poisoning occurs when it enters the stomach or by inhalation. The absorbed cadmium accumulates in the liver and kidneys as a complex with metallothionein. In erythrocytes and soft tissues, cadmium binds to α2-macroglobulin and albumin. Cadmium binds to sulfhydryl groups of proteins, which leads to inactivation of enzymes; inhibits the activity of mitochondria, increases free radical oxidation in cells. With further development of intoxication, there are nosebleeds, ulcers and perforations of the nasal septum, and other complications, chronic obstructive pulmonary diseases with the development of progressive pneumosclerosis and emphysema, gastrointestinal disorders, liver damage. From the side of the blood, hypochromic anemia or compensatory erythrocytosis are observed [5].

The most commonly used therapeutic strategy for heavy metal poisoning is chelation therapy to promote metal excretion. However, chelators for Cd and Pb toxicity are themselves reported to have a number of different safety and efficacy concerns. None of the chelation therapies for Cd toxicity has yet been approved for clinical use thus far [6].

Many studies in both animals and humans have shown that a deficiency in essential metals such as zinc, calcium or iron can lead to greater absorption and toxicity of Cd and Pb [7–9]. Therefore, it is logical to suggest that the supplementation with essential metals can provide protective effects against Cd and Pb intoxication.

Particular interest at present is the use of plant extracts and infusions as protectors when exposed to heavy metals, the molecular mechanisms underlying the capture and transport of elements, as well as the protective and adaptive reactions of plants are widely studied [10]. Edible plant supplements can not only increase the level of vitamins and essential metals in the human body, but also reduce the risks of Cd toxicity. In connection with the above, the purpose of our research was to study the protective properties of common beetroot seed infusion during acute and sub-acute poisoning of rats with cadmium nitrate.

Seeds for research were obtained from the collection of Michurin agricultural town and were identified by the experts of the Department of Botany of the Faculty of Biology and Geography of E.A. Buketov Karaganda University. 3.5 g of dried seeds were taken; they were infused in 200 mL of water at a temperature of 80–90 ºC for 1 hour and filtered. Then the freshly prepared filtrate was used in the study for five hours.

This research complied with the ethical principles outlined in the European Community Directive (86/609EC) and the requirements of the World Animal Protection (WSPA).

In the experiment, a total of 50 male non-linear rats were used. The rats were housed five per cage and had free access to food and water. They were exposed to a 14–10-h light-dark cycle, the room temperature was controlled at 22 ± 3 ºC. Rats were poisoned with Cd nitrate, which was administered in some animals at a dose of 0.1 g/L single intraperitoneally, other animals obtained 0.01 % 1 mL cadmium nitrate solution 5 days a week orally for 24 days — daily to each animal per orally. Animals were exposed to Cd nitrate when they weighed 180 ± 30 g. Experiments were performed during 10 and 24 days. The 50 non-linear rats were divided into five groups according to:

G1: Rats exposed to Cd (in the form of Cd nitrate), 1 mL per rat single intraperitoneal dose of 0.1 g/L.

G2: This group received Cd nitrate 1 mL per rat single intraperitoneal dose of 0.1 g/L + seeds infusion (3.6 mL per rat during first 5 hours of the light part of the day) for 10 days.

Animals were sacrificed by decapitation under ether anesthesia.

The mean ± SEM values were calculated for each group to determine the significance of the intergroup difference. Each parameter was analyzed separately using the one-way analysis of variance (ANOVA) test. To determine the difference between groups, Student's «t»-test was used. P < 0.05 were considered to be significant.

The parameters of the general blood analysis of rats poisoned with cadmium nitrate and in bio correction of beetroot seeds are shown in Table 1. Studies have shown the presence of variations in the indicators of white blood cells, red blood cells and platelets depending on the period of days of poisoning and bio correction.

Thus, a comparison of the results obtained in the groups of animals with acute poisoning with cadmium nitrate (group 1) and poisoning with subsequent bio correction (group 2) revealed that the content of white blood cells after bio correction with beetroot seed infusion significantly (P ≤ 0.05) increased in comparison with the control and the result of the first groups (Table 1).

When comparing the results after a sub-acute 24-day poisoning (group 3) and poisoning with subsequent correction (group 4) with infusion of common beetroot seeds in blood tests, no significant differences could be identified. However, there were tendencies for an increase in the platelet count in the third group and, to a greater extent, in the fourth group with correction compared to the control. A similar trend was observed for the average concentration of hemoglobin in erythrocytes. 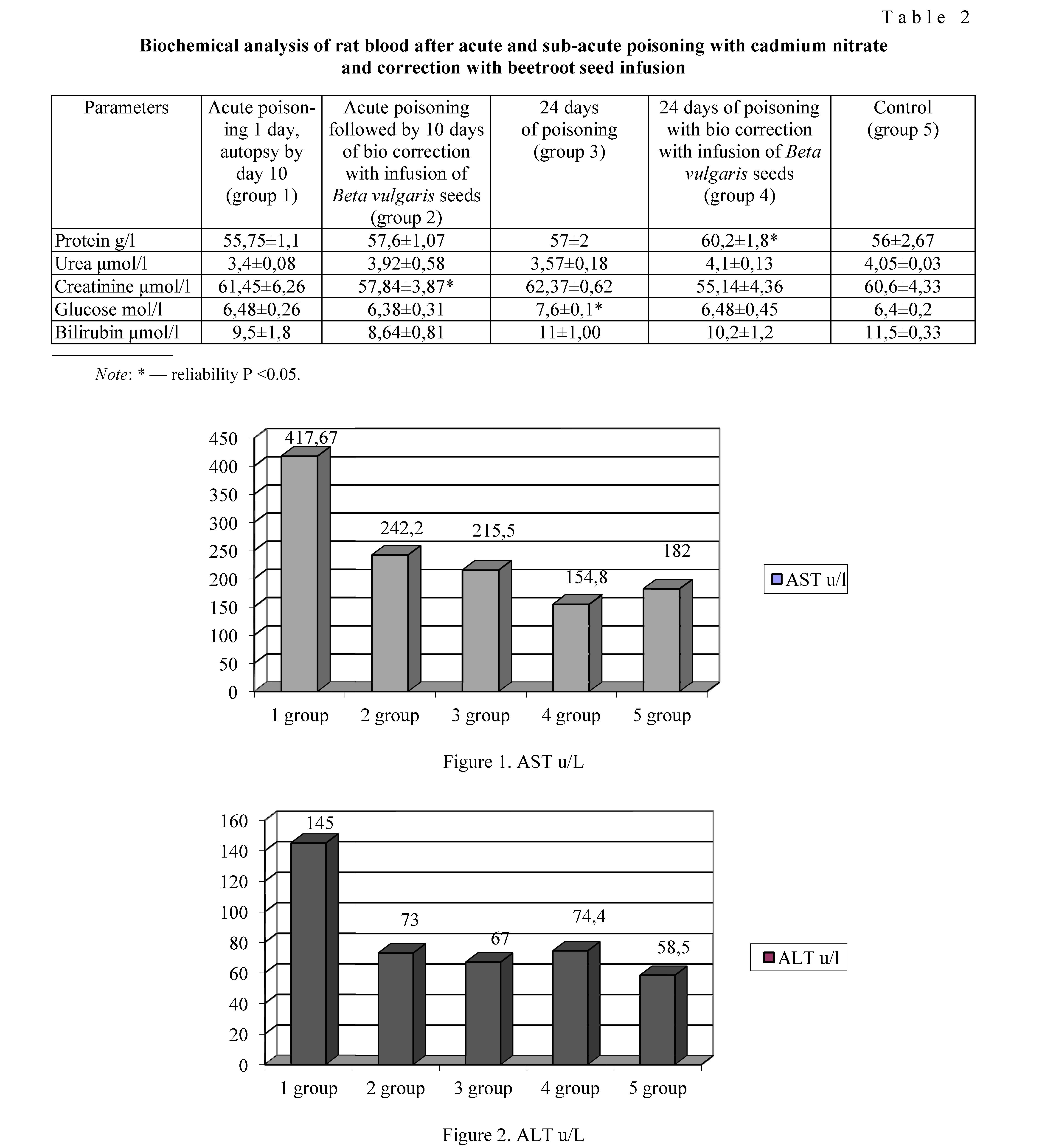 The first group of animals (acute) showed the highest level of changes in blood biochemical parameters in terms of the content of AST, ALT, and glucose in comparison with other groups studied (Fig. 1, 2).

After correction with the infusion of Beta vulgaris seeds in rats of the second and fourth groups, the indicators of liver enzymes significantly decreased. In the analyses of the group with acute priming with cadmium nitrate, AST decreased from 417.67±45.83 till 242.20±27.87 u/L, i.e. 1.7 times. Similarly, when comparing this indicator in groups 3 and 4, AST decreased by 1.4 times after biocorrection. There were small changes in urea, creatinine, and protein levels that were not reliable confirmed.

As a result, our research allowed asserting that the use of Beta vulgaris infusion in acute and sub-acute experiments with poisoning of animals with cadmium nitrate had a positive effect on blood parameters and positive hepatoprotective effect.