It is presented a developed and constructed histophotometric complex for quantitative evaluation in relative units of content of deposited insulin and zinc in insulin-producing B-cells of histologic preparations of pancreas. The method previously used in similar studies was based on a visual assessment of the results of coloring the preparations, or a more accurate quantitative one under the conditions of using universal complexes, including a microscope with built-in measuring devices (photometers), the disadvantage of which is, as a rule, a very high cost limiting the possibility of their use. In addition, such complexes, in connection with their universality, are not suitable for studies related to the study of the functional state of pancreatic B cells using highly specific histochemical methods for detecting insulin. The authors aimed to develop and create a study- oriented histophotometric complex of zinc and insulin in B cells, created using inexpensive components, which would help make quantitative analysis significantly more accessible to researchers working in the field of experimental diabetology.

The disadvantage of histochemical methods for assessing the results of insulin measuring is the approximate amount of hormone in B-cells, based on a visual investigation of the color density or intensity of fluorescence of hormone. Factory made microscopes with photometric devices with built-in photometric devices have two significant drawbacks: 1) they do not allow to diaphragm of pancreatic islet's central part, contains only B-cells in the photometry field, thereby allowing photometry of cells of the exocrine pancreas, which have nothing to do with insulin synthesis; 2) such optical systems are almost always universal, that is, very expensive, because they include a number of other functions that do not have any special need for investigators.

Authors are proposed a developed and manufactured histophotometric complex for selective photometry of B-cells after staining by specific for insulin and zinc methods adopted for light and ultraviolet microscopy as aldehyde-fucshin staining, diethylpseudoisocyanine methods, staining by Dithizon and immunohistochemical method [1–6, 8, 9]. In the supplement to the complex, repeatedly tested and refined cal- culation methods have been developed that allow estimate the insulin and zinc content in B-cells.

The system includes the following components: 1) microscope; 2) a light source (a lamp of the usual part of the spectrum and an ultraviolet lamp with opaq-porthole); 3) microphotosystem MFN-2 (LOMO) with a built-in lobe diaphragm that allows us to diaphragm the central part of pancreatic islet containing B-cells, that is why is excluded the possibility of photometry of A-cells and, especially, cells of exocrine tissue. The diaphragm was mounted as close as possible to the photomultiplier tube, above ocular for to prevent 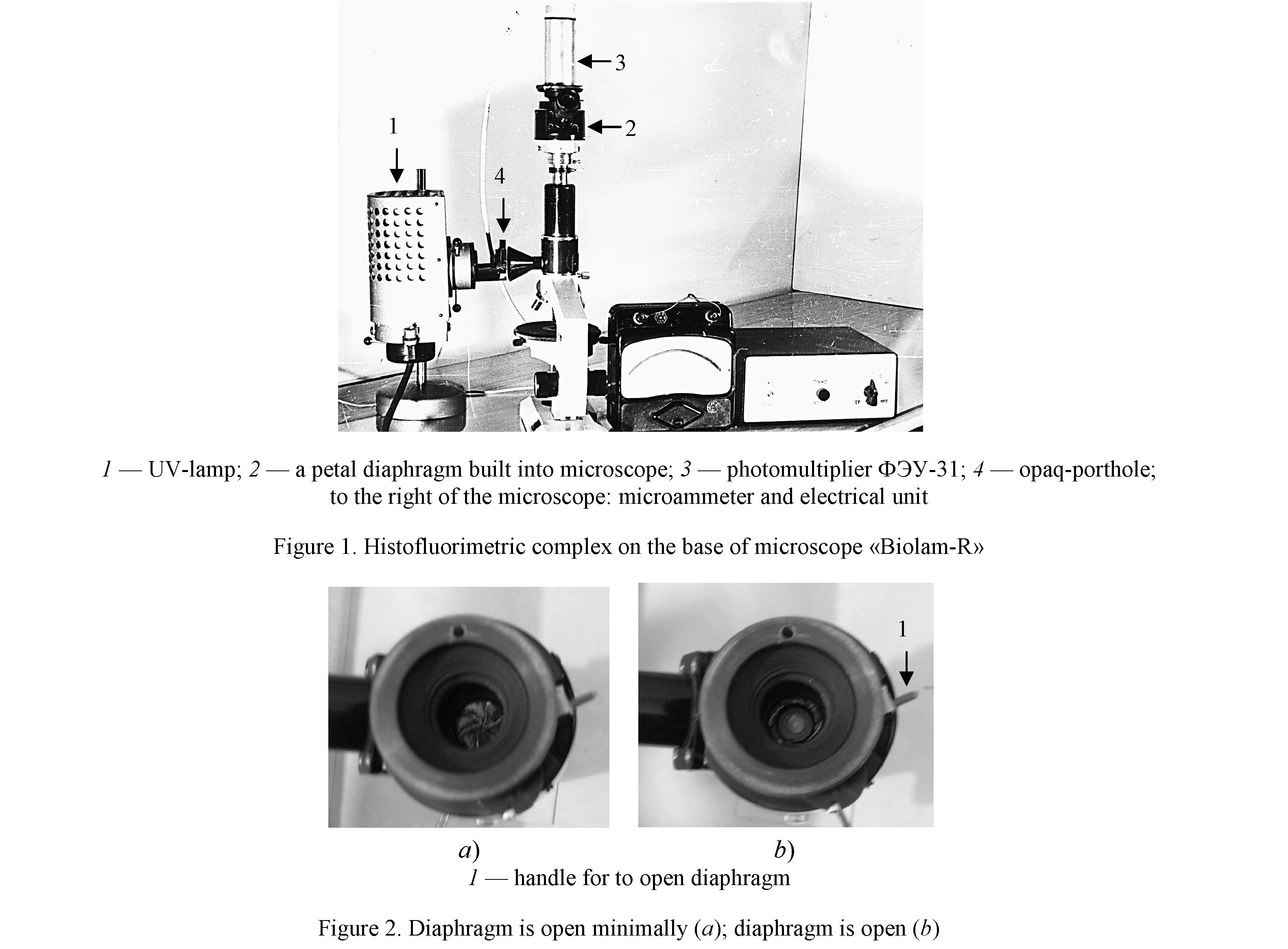 light flux scattering. The design of the optical part of the system is completed by photomultiplier tube. The complex includes a power component with five measuring ranges for the photocurrent value and a microammeter (Fig. 1, 2), the readings of which (in microampers (μA) are the initial data for calculation of insulin and zinc content in B-cells as relatives units (r.u.). The used filters: UVS-1 located between lamp and microscope; and yellow filter locking light filter fixed on ocular of microscope. Used optic: objective ×40; oculars: ×3 or ×4. Note: If necessary, the photomultiplier tube is easily replaced by a camera for microphotography of the studied B-cells.

In frozen sections or sections of fixed pancreas tissue stained for insulin and zinc using highly specific methods [1–10], the fluorescence intensity of B-cells is measured in microamperes (μA) of a islet's central part contains B-cells. The required number of studied islets is 20–25. For the first B-cells of control intact animals contains a normal amount of insulin and zinc are examined; calculation the arithmetic mean of mA (M±m) of the fluorescence intensity; similarly measure the intensity of fluorescence of B-cells of experimental animals, for example, with diabetes, which is always much lower than normal.

The direct proportional dependence was used in the calculation: the more intense fluorescence result the higher light flux going to the photometer and the higher the content of insulin and zinc in B-cells.

For histochemical methods adopted for light optical microscopy (aldehyde-fuchsin, immunohistochemical, Victoria-4 method with dimethylnaphthylmethane staining reagent, color index 42563) the inverse dependence is used to calculate the parameter K, namely: the higher insulin content → result more intensive density of staining of B-cells → that result a lower intensity of the light flux goes to the photometer and the lower the photocurrent value expressed in μA. 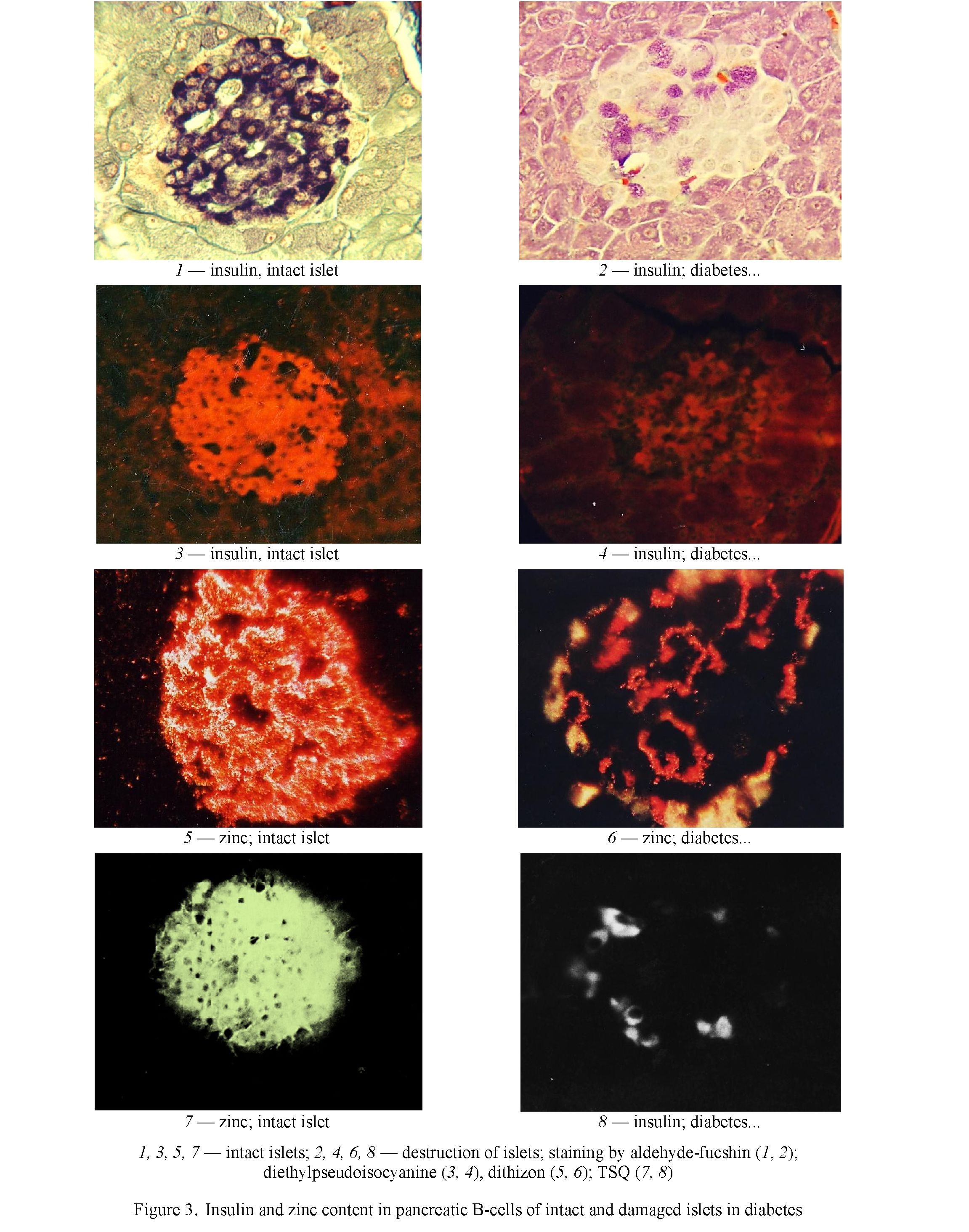 The results presented in Table 1 and in Figure 3 showed that most marked differences of the quantitative assessment of insulin and zinc content in intact and damaged B-cells were obtained using high specific luminescent staining methods of pancreatic islets, as well as using of Dithizone method. Staining by using of aldehyde-fuchsin method and the Victoria 4 method, accompanied by additional staining of other cellular structures result increase of the total color density in addition to colored of B-cells for insulin, which result increasing of the value of density of color, which characterizes the level of insulin in the B-cells. Fluorescent histochemical methods staining of insulin or zinc only without staining of other cellular structures, due to which the assessment of hor- mone and zinc content in B-cells are that is why more accurately.