For living organisms, the main indicators are the average values are meteorological and hydrological parameters that determine the coverage of the survival of species. Currently, all research on the trend in the landscape of river basins should begin with an analysis of climate change, which is currently undergoing rapid dynamic changes. The purpose of the study is to analyze the long meteorological trends of atmospheric humidity of the Nura River Valley. In the presented study, we analyzed the daily data of two weather stations of the Central Kazakhstan for the period from 1939 to 2019 within. The territory of the Nura river basin belongs to areas of pronounced insufficient moisture. A distinctive feature of the river is that the bulk of the annual flow takes place in a short period of spring flood (early April to mid-May, 4–5 months). Within the Nura river basin, reliable trends of significant changes in annual, semi-annual and seasonal amounts of atmospheric precipitation have been revealed. All identified trends have positive indicators. The results can be used for agricultural planning in the context of climate change in the Central Kazakhstan.

A necessary prerequisite for studying climate change and its effects is the availability of meteorological data for the period of observation and information on their expected changes in the future. The purpose of the article is to describe the available in the free access of data arrays of modern meteorological observations in Russia, as well as a review of the results of calculations on hydrodynamic models climate, on the basis of which projections are built for the future [1–4]. The article considers two most important weather elements — ground-level air temperature and atmospheric precipitation.

The modern ecological and geographical studies can cover any territory defined by both political and administrative or natural (landscape) borders, boundaries of river basins [5, 6]. For determination of the climatic comfort in the river basin, it is necessary to evaluate the main long-term directions of the most important meteorological and hydrological parameters. Long-term changes in air temperatures determine changes in evaporation from the day surface, and, therefore, can lead to a decreasing or increasing in humidification in the regions [7–11].

The aim of our study was to analyze the long-term meteorological trends of atmospheric precipitation in the Nura river basin.

The basin of the Nura river is the main basin of the Karaganda region [12]. The beginning of the river is three rills, which located on the north of the Konyrtobe Mountains at an altitude of about 1200 m. Nura flows into the drainless lake Teniz at an elevation 304 m. The total length of the river is 978 km; the catchment area is 58.1 thousand km2. The average perennial flow is 619 million m3. In the river basin there are 3 main weather stations (Karaganda, Czernigovka and Besoba), 2 of which are active.

The daily data of two weather stations of the Central Kazakhstan is statistically analyzed for the period from 1939 to 2019; for Besoba weather station — only from 1992 to 2009.

For the obtained multi-year data lines, graphs of their multi-year movements are plotted and correlation coefficients between the actual data and their linear trends are calculated. In this case, only those correlation coefficients were used, the significance of which ranged from 90 % to 99.9 % [12]. The relative coefficient of change, expressed in percent, was calculated, which is calculated as the ratio of the module of change of trend values of temperature (or precipitation) over a long-term period to the module of amplitude of fluctuation of actual (measured) values of this parameter in a long-term aspect:

Significant reliable trends in the multi-year placement of annual, semi-annual and seasonal amounts of atmospheric precipitation were revealed for almost two analyzed stations of the Nura river basin; all of them are significant and positive (no negative trends were revealed). In both stations their reliable trends fluctuate within r = +0.31 and r = +0.38 (Table 1).

Note: 1) r1– correlation coefficient of linear trend with curves of actual long-term precipitation values; 2) α2 — significance of correlation coefficients; 3) Sr3 — average quantity of a total atmospheric precipitation for the long-term period according to actual data; 4) ∆4 — module of change of actual value for the period under review, calculated on the basis of trend; 5) OKI, %5 is the percentage of change in actual average precipitation values calculated as the ratio of the module to the module of the average parameter value (in %)

For the weather stations under consideration, with trends of long-term changes in annual and semiannual amounts of atmospheric precipitation, significant trends are also characteristic for various seasons of the year. The main dynamics in seasonal redistribution of precipitation is their unconditional increase in winter (1–2, 12) and partly in autumn (9–11) (Fig. 4). 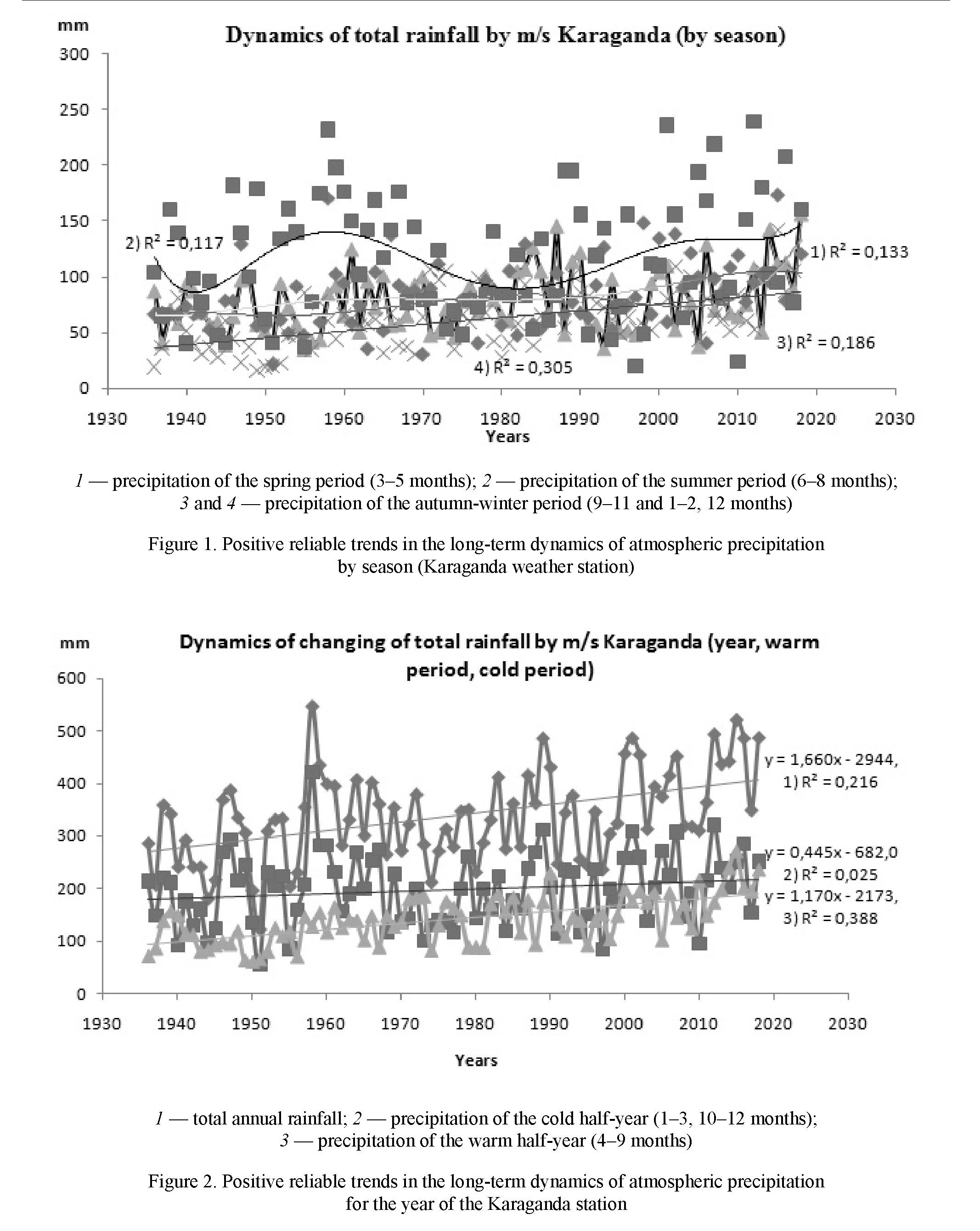 For the river basins of the steppe zone of Russia and Kazakhstan, over the past century, there has been a tendency to redistribute atmospheric precipitation towards their increase in the cold half-year, which contributes to a change in soil and soil conditions in floodplains and watersheds [13, 14]. 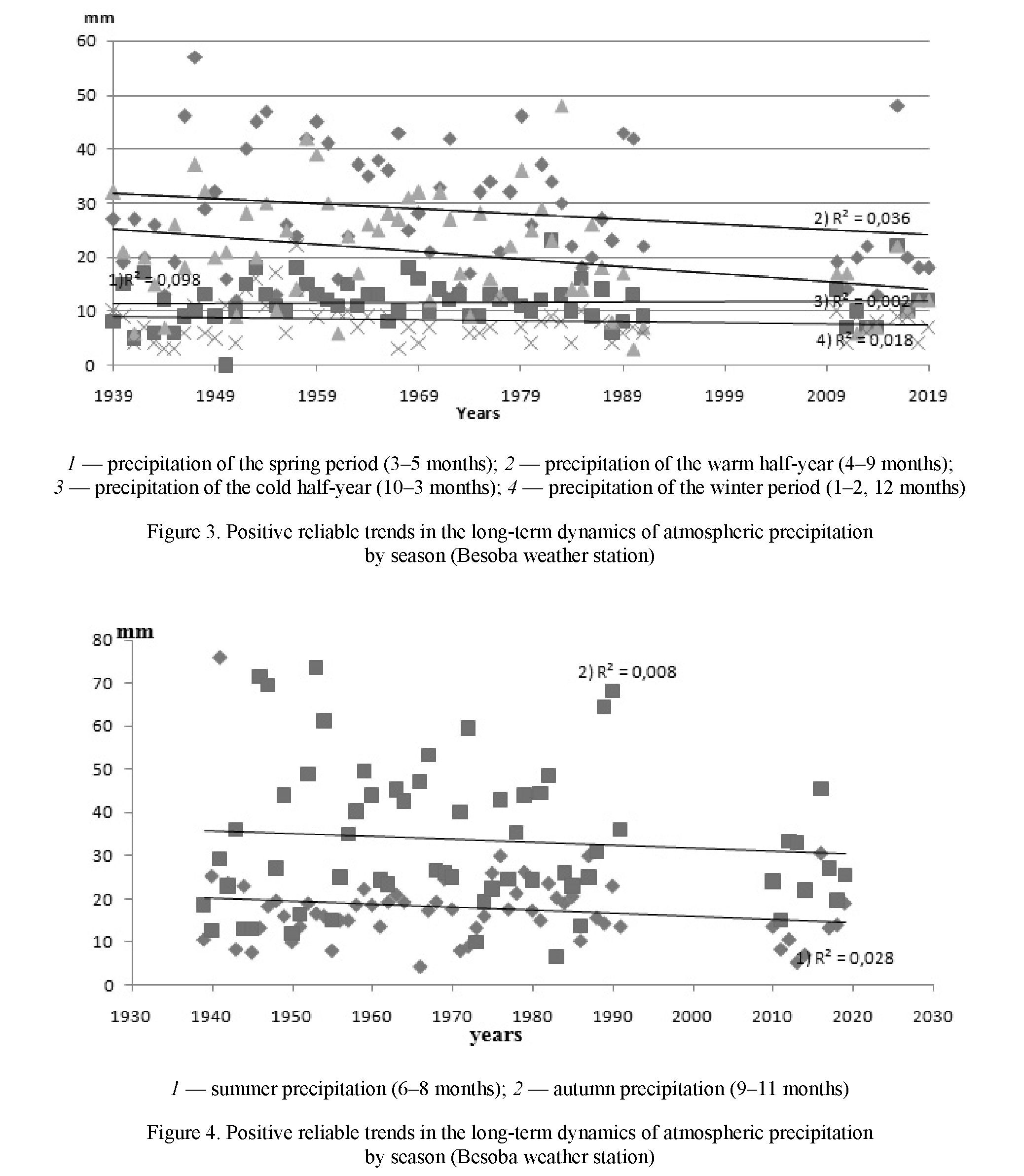 Based on stock data and our own analysis of multi-year materials, the following conclusions can be drawn. The territory of the Nura river basin belongs to areas of pronounced insufficient moisture. A distinctive feature of the river is that the bulk of the annual flow takes place in a short period of spring flood (early April to mid-May, 4–5 months).

For both weather stations of the Central Kazakhstan within the Nura river basin, reliable trends of significant changes in annual, semi-annual and seasonal amounts of atmospheric precipitation were revealed; all revealed trends have positive indicators.

The article has been prepared as a part of complex survey of river valleys of the Karaganda region (the Central Kazakhstan) carried out within the framework of cooperation between E.A. Buketov Karaganda University and Altai State University (Barnaul).