Factors of innovative development of the economy of the Republic of Kazakhstan: analysis and assessment

Object: To study the correlation analysis of GDP indicators and factors of innovative developmentof the economy of Kazakhstan.

Methods: We have applied the method of quantitative data processing, which is correlation analysis. Correlation analysis is one of the most effective tools for statistical research of the economy. It allows for identification of cause-and-effect relationships between various phenomena in economy, management, and social sphere. We have processed the obtained data mathematically using a multitude of software titles and the Microsoft Excel and StatSoft Statistica 10 suites.

Results: The article describes retrospective statistical data of a research object, assesses the relationship between GDP and factors of innovative development using a set of variables.

The article conducts correlation analysis of indicators that characterize the amount of R&D and GDP costs. It presents main indicators of enterprise innovation for 2014—2018, displays the share of innovative products (goods, services) in GDP for 2006—2018, reveals sources of financing of domestic R&D (million KZT) for 2014— 2018, discloses correlation matrix of indicators characterizing the introduction of innovations into the Republic of Kazakhstan economy. The matrix includes the following variables: number of employees engaged in R&D, number of innovative enterprises, domestic R&D expenditures, share of innovative products, expenditures on technological innovations, trademark registration and patent issuance, and R&D. We have built an exponential equation of the correlation-regression model, and found the coefficient of determination.

Innovation is one of the most important components of a modern economy, a "stepping stone" to improving the quality of life and a stable, environmentally safe future. Innovation is an essential part of social and economic life and human activity in all its manifestations. So far, there are over a hundred different definitions and interpretations of the term "innovation." In recent decades, innovation has become one of the most intensively researched topics in both economics and management. World practice shows that innovation development is not only the main tool for improving an individual entity's competitiveness, but also acts as a serious incentive for the economic development of the country as a whole (Chesbrough, H.W. et al., 2006).

Innovation has been recognized as a very important engine of renewal in today's rapidly changing and competitive business environment. Innovation is a process aimed at creating or developing a new product, regardless of type or degree, that increases the company's profit and strengthens its market position. Competition is the main reason for enterprise innovation, so different businesses innovate in different ways. Understanding "innovation" depends widely on why and where it is located. Innovations are developed in various businesses or systems. In order to succeed and create value, innovative businesses and other bodies must evaluate the tools and resources to achieve the expected results. Economic and technological innovations have changed our lives for the better (Cohen, W. M., 2010).

The experience of successful developing countries shows that science and technology research policies can be well integrated into national development strategies and, combined with institutional and organizational changes, can contribute to improving productivity, improving business competitiveness, supporting faster growth and creating jobs. To achieve this goal, policies need to consider specific features of innovation in developing countries.

Innovation is one of the most important components of the modern economy (Damanpour, F., Aravind, D., 2012).

To test the hypothesis, we need to resolve the following issues:

A number of scientists argue that innovative development refers to the transformation of all the economy and social system spheres based on scientific and technical achievements (Chesbrough, Vanhaverbeke, West, 2006, Cohen, 2010, Damanpour, 2012, Golubkin, Kleva, 2008, Satpayeva, 2017, Spanova, 2015).

We applied the method of quantitative data processing-correlation analysis. Correlation analysis allows to identify cause-and-effect relationships between various phenomena in the economy, management, and social sphere.

Analysis of the research object's current state. Innovation is an essential part of social and economic life and human activity in all its manifestations. So far, there are over a hundred different definitions and interpretations of the term "innovation."

World practice shows that innovation development is not only the main tool for improving an individual entity's competitiveness, but also acts as a serious incentive for the economic development of the country as a whole.

In 2019, rising by four positions, Kazakhstan took the 34th place out of 61 leading world economies in the annual competitiveness rating compiled by the Swiss business school IMD. Russia received 70.4 points out of 100 possible and went up from 40th to 38th place. The United States, Singapore, Sweden and Denmark lead this rating.

According to the report "Global Innovation Index 2019," leading innovative countries are Switzerland, Sweden, the United States, and the Netherlands. According to the results of the Global Competitiveness Index in 2019, Kazakhstan took 79th place (74th place in 2018) out of 129 countries landing between Bahrain and Oman, while Russia took 46th place.

Table 1.Key indicators of innovative activity of enterprises for 2014-2018

n recent decades, innovation has become one of the most intensively studied economics and management issues. A multitude of analytical papers consider in detail both current state of innovative development of Kazakhstan's economy and the history of its development. An important result of the study of the state of affairs is the conclusion that, even being an essential branch of the economy, the country's innovative development has not yet fully realized its potential (Schumpeter, J. A., 1934). 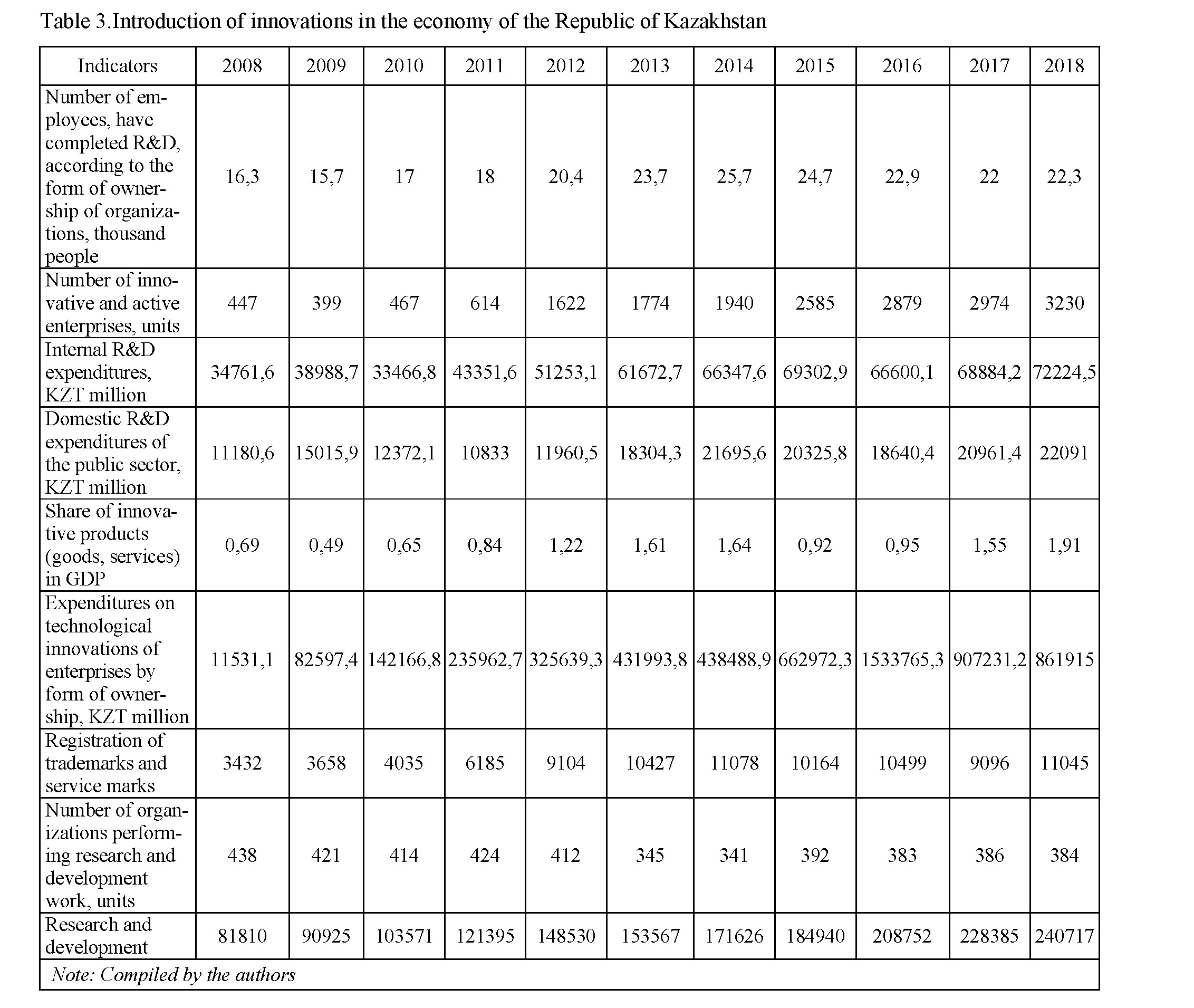 Let us consider the dependencies of key factors of Kazakhstan economy's innovative development, which include the following:

Let us analyze the above data on innovation implementation in the country's economy (Table 3) (Sokolov Ĝ.А., 2016).

For the purpose of analyzing the relationship between GDP indicators, the table shows paired correlation coefficients.

Table 4. Correlation matrix of indicators that characterize the introduction of innovations in the economy of the Republic of Kazakhstan

Table 4 shows calculations made and the matrix of correlation coefficients. Of interest here is the value of matching correlation coefficient between the number of innovatively active enterprises and domestic expenditures on R&D, which is 0,96. Thus, the number of innovative enterprises and domestic R&D expenditures are basically closely correlated interdependent variables. High correlation coefficients between the registration of patent applications and the issuance of patents in Kazakhstan and the number of employees engaged in R&D, domestic R&D expenditures, share of innovative products in GDP (r = 0,95, r = 0,78, r = 0,81) indicate favorable economic situation, so increased intensity of state regulation leads to increased scientific activity. There is a strong but negative relationship between the number of entities engaged in research and development and the rest (r = -0,87, r = -0,75, r = -0,81, r = -0,78). Some of these entities probably exist only nominally and their economic activity is minimal.

where y is GDP at current prices, and x is domestic R&D expenditure. The coefficient of determination is 0,79.

Figure 2 shows a comprehensive statistical method for point projecting of a system of economic indicators. Its main features are:

The novelty is determined by the lack of development of the topic in economic science and consists in the substantiation and description of retrospective statistical data of the research object, in assessing the relationship between GDP and factors of innovative development using a set of variables.

Significance of the results obtained for the theory consists in the development of both theory and methodology for studying innovations and state economy's innovative development.

It is necessary to develop competitive mechanisms to stimulate not just the supply, but also the demand for innovation.

We need to pay more attention to new forms of innovative activity: clusters, technology parks, industrial zones, etc. The fact that not only real assets are important, but also institutional and social interaction of all participants and an atmosphere of mutual trust is also not to be ignored (Golubkin V.N., Kleva L.P., 2008).

In the last decade, much attention has been paid to improving the quality of implementation of educational and research programs by merging universities and reorganizing their educational and scientific activities (SpanovaL.К., 2015).

Thus, the statistical analysis has shown the following:

Thus, based on the analysis, we can note the importance of innovations, but they are not the only management tools in GDP growth, which is proved by the research conducted for this paper. A multitude of studies of innovation's impact on GDP dynamics have shown that the level of relationship between innovation and economic development varies from country to country. The results of the study have shown a positive relationship between GDP growth and R&D expenditures in the country. Analyzing the relationship between the dynamics of GDP growth and innovation variables in Kazakhstan, in most cases, one can observe a rather weak association of innovation and economic development. It is important to ensure a proper level of growth in the costs of technological innovations in order to increase activity in Kazakhstan.