The level teaching of foreign languages at North Kazakhstan State University is considered by the author as one of the effective methods with a point - rating system. The author of the article analyzes the pros and cons of teaching in multilevel groups, and also gives a description of the range of implementation of teaching foreign languages in two versions, according to the State Educational Standard, depending on the initial level of students' foreign communicative competence with a detailed description of the monitoring process. The author makes an attempt to determine both positive and negative aspects of the distribution of students into groups with the same level of knowledge of foreign language competencies when entering a university. The article urgently raises the question of using level authentic teaching and methodological complexes in the classroom when organizing work on a foreign language. The author presents the results of a survey among 1st year students of non-linguistic specialties on the question of the level of teaching a foreign language in order to clearly understand what problems students are facing. In addition, practice shows that at the moment it is not possible to completely switch to level learning of foreign languages due to many of the reasons mentioned, in teaching foreign languages at non-linguistic universities on a parity basis, there is both level and blended learning.

In connection with the introduction of multilingual education in universities of Kazakhstan, a revision of the teaching of foreign languages has arisen and significant changes have already taken place. The main factors of these changes are related to the competencybased approach to teaching foreign languages, with the emphasis on independent study of a foreign language by students, with a point-rating system for assessing students' academic achievements and the use of level learning at all stages of mastering a foreign language.

Level teaching of foreign languages has appeared in our Kazakhstani methodology and practice of teaching foreign languages relatively recently. In the traditional version of teaching foreign languages, university teachers in the learning process are guided to a large extent by the average student, while the group is formed without taking into account their language skills and at the beginning of the educational process, students of a multilevel group come to classes in a foreign language. For the teacher who is faced with this problem, difficult conditions begin to prepare for the lesson. Students with good and excellent language knowledge, who are able to quickly learn material in the classroom, lose their motivation, while less capable and prepared students try to learn the material they have learned. On the other hand, those with low knowledge experience significant difficulties, do not have time to learn a difficult program for them, and they also lose their motivation, which further aggravate their position [1].

What are the pros and cons of learning in multi-level groups. In mixed groups, students have no illusions about their language level of proficiency, their rating in the group, and if a student wants to improve his rating, he has someone to follow. He hears good and excellent answers in the lessons and with the individual approach of the teacher and his own will can achieve success. It can be considered the first and serious advantage of training in multilevel groups.

Today, the process of modernization of educational systems is subordinated to one common idea - the idea of creating a single educational space. In the countries of the European Union, a lot of effort has been and is being done to create such a space, which has led to the creation of an international standard, which is presented in the form of panEuropean competencies in foreign language proficiency. The international standard, which was officially adopted by the Council of Europe in 2001 and, being comprehensive and consistent, opens up new opportunities for those who teach foreign languages and those who study them. The core of the international standard is level education, which is described in detail in the pan-European competencies [2].

SCES of language education in the Republic of Kazakhstan on the development of English as a language of business communication and a means of integration into the global world economy in the education system says that it is advisable:

According to the results of the intra-university commission, it was revealed that the training of foreign language at M. Kozybaev NKSU occurs according to option B, guided by the State Standard of the Republic OfKazakhstan on 6.08.085-2010.

At M. Kozybaev NKSU level education is implemented as follows. At the beginning of the academic year, at the first classes, undergraduate students undergo entrance monitoring. They are offered level tests and an interview to determine the language level (Al, A2, Bl, etc.). As practice shows, there are mainly students with A1-A2 levels, fewer - Bl. Unfortunately, the contingent, as well as the number of hours offered by the program and curricula, do not make it possible to transfer a larger percentage of students to a fairly high level, for example, Bl. The reasons for the deficit of a high level of foreign language proficiency at the initial stage of study at a university are associated more with school education:

At the end of the academic year, students are invited to undergo final monitoring to analyze the positive dynamics in teaching a foreign language. Here at this stage, in our opinion, a revision of the SES is necessary regarding the discipline «Foreign Language» as the base. After the final monitoring and interview, as well as taking into account the positive dynamics, it will be advisable to transfer students to a higher level for further indication in the diploma.

The distribution of students into groups with the same knowledge level of foreign language competencies when entering a university has both positive and negative sides. Such training helps to effectively build process in the classroom, attracting all students to group, pair work, to mobilize them to activity, since basically the level of their knowledge, skills and abilities is the same. A similar approach to the formation of groups creates the prerequisites for enhancing the activity of each student. The student himself sees his place in the group, sets goals and objectives for mastering foreign language competencies.

A great deal of attention when organizing work on a foreign language in a non- Iinguistic university should be given to the use of authentic level educational and methodical complexes (McMillan, The Heinemann, Oxford, Cambridge, etc.). Such complexes create good conditions for immersion in the environment Ofintercultural communication to improve listening skills of foreign language speech, and allow us to diversify the forms of work in the group. The complex includes audio and video materials, which are an important source for the formation of auditory competence, as they use the speech of native speakers [4, p. 82]. In addition, in authentic educational complexes, some of the material for independent study is provided, which is also an important factor in the organization of the educational process at the university.

The teacher’s task is to create a development situation that provides students with freedom and responsibility in choosing and making decisions, autonomy, independence of actions, combined with the adoption of responsibility for the result [5, p. 176] rating system [6; 174-178]. But, unfortunately, with such a variety of authentic textbooks, there is not a single multilevel or educational complex in sufficient quantity, since, as noted earlier, the greater student body is at the A1-A2 level at Ouruniversity.

Along with authentic textbooks that create the basis for dialogue in the intercultural communicative space, in the classroom at M. Kozybaev NKSU for undergraduate students can effectively use specialized textbooks for universities, as well as textbooks, electronic textbooks created by teachers of the department and based on popular science texts for bachelors, followed by discussion in a group, with the complexity of the subject and the use of scientific texts for abstracting and annotation in the magistracy. Preservation of professional communication seems to us a prerequisite for maintaining the student's motivation for the further development of their own foreign language competencies.

We conducted a survey among the students of the 1st year of non-linguistic specialties at NKSU, whose goal is to improve the methodology for introducing level-based teaching of foreign languages at a university.

The objectives of the study are to ensure the study of this process in teaching foreign languages, to find out the students' attitude to foreign language textbooks and level learning in general, to identify the positive and negative aspects of this training.

The research methods used by the authors include an analysis of the results of the survey, a generalization of the information received and its methodological and pedagogical interpretation. For European students, tiered learning is a fact that is not in doubt and does not need to be investigated. This is a new phenomenon in our country, which determines the novelty of our study, during which not only the positive, but also the negative, from the students' point of view, sides of the application of the level of teaching foreign languages are revealed.

Let's move on to a direct examination of the test results. 86 full-time first-year students ofnon-linguistic undergraduate specialties were interviewed.

Since the majority of students answered this question positively, we can conclude that most students approve of authentic educational complexes, which are always level. 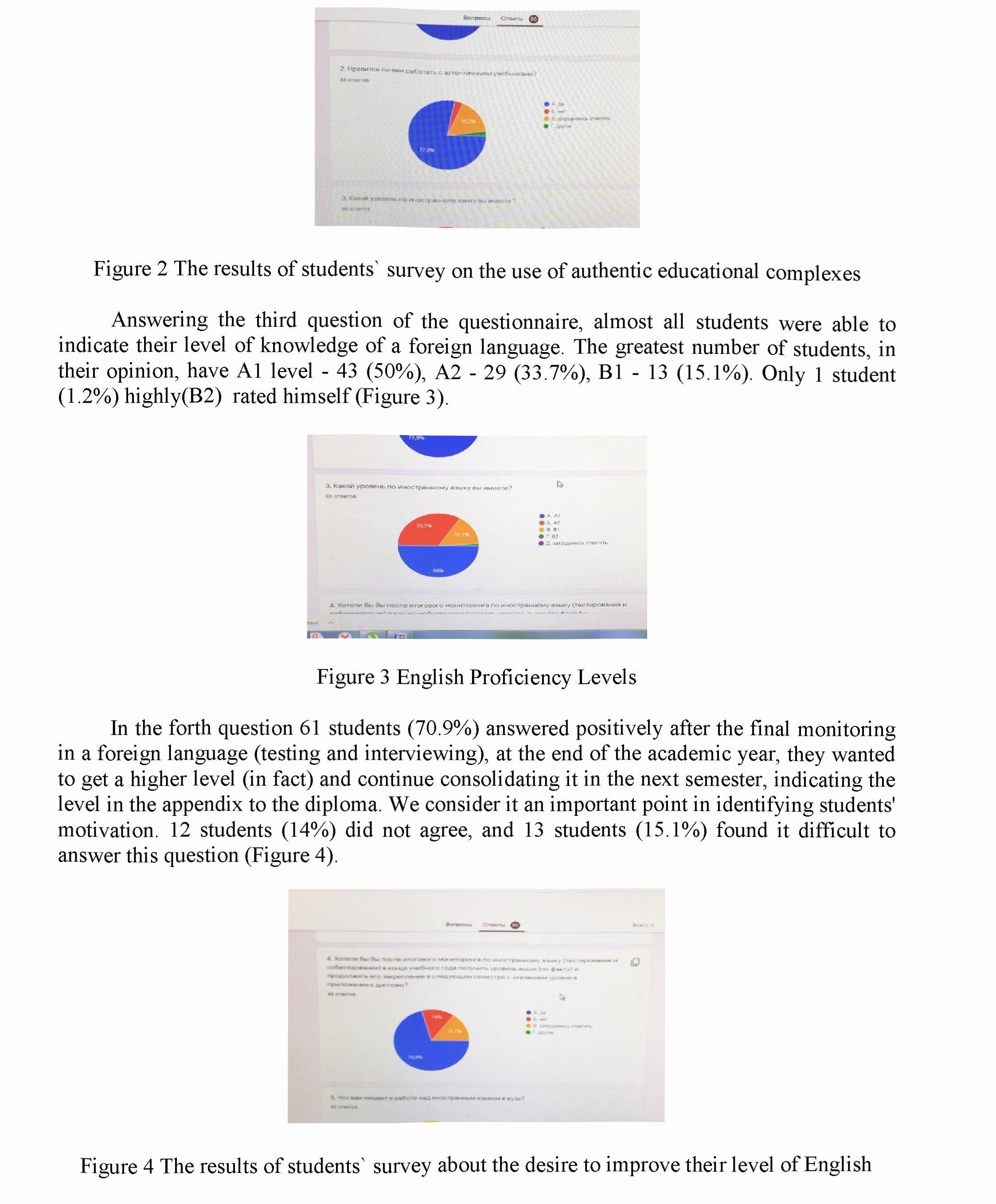 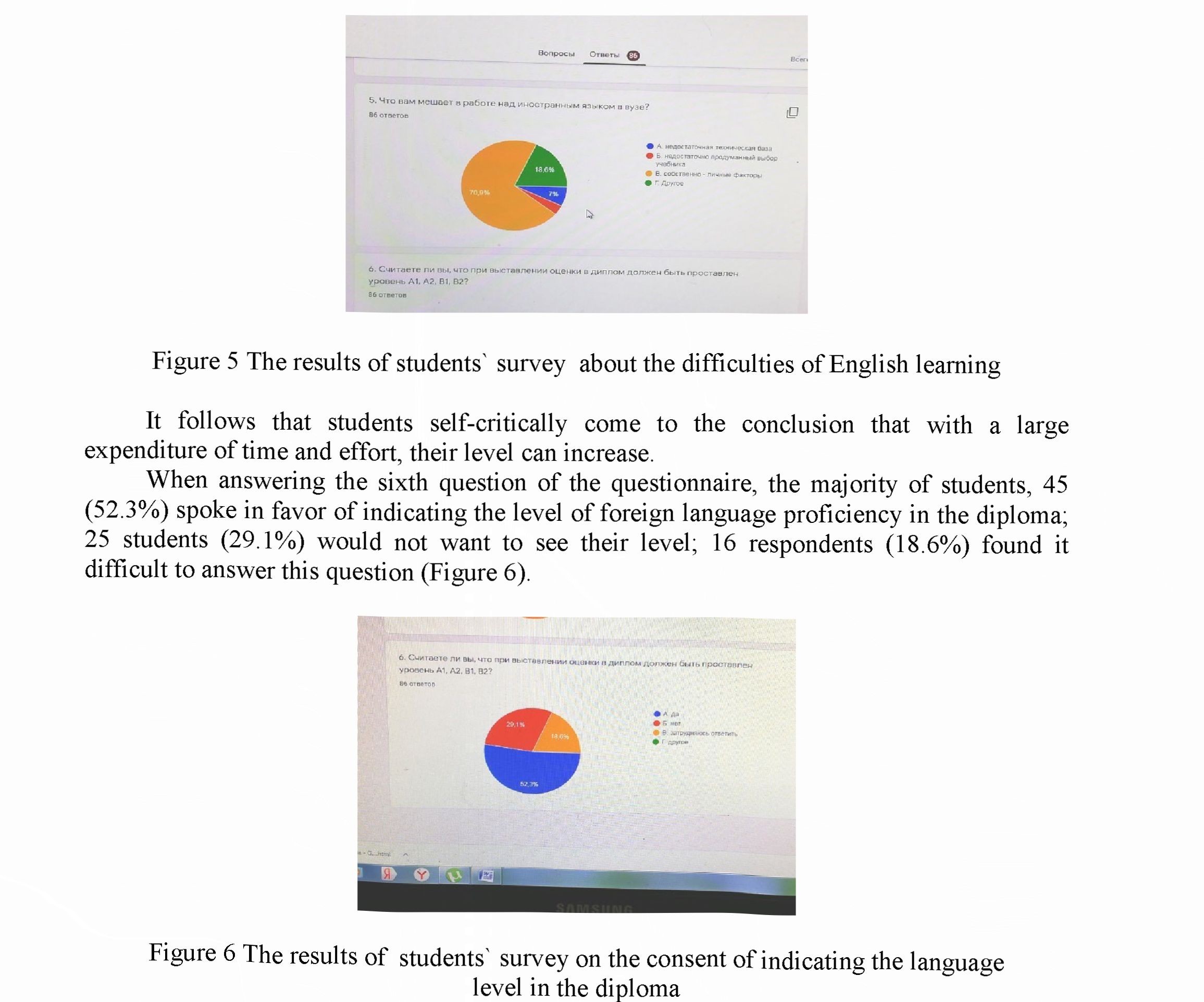 Answering a questionnaire about learning difficulties, students tried to identify factors that prevent them from mastering foreign languages more successfully. Such difficulties for most students are actually personal factors. This answer was given by 61 students (70.9%). 16 respondents (18.6%) mentioned other factors preventing them from mastering a foreign language. Among these, poor training in foreign languages at school, a low level of teaching at school, and others can be distinguished. 6 respondents (7%) noted the insufficient technical base used at the university as a factor that impedes learning. 3 students (3.5.%) expressed the opinion that the choice of a textbook in a foreign language was insufficiently considered (Figure 5).

Analysis of the questionnaire results led the authors of the article to the following conclusions:

Thus, the following conditions can be called positive features of the introduction of level education in a university:

The negative factors of the introduction of level learning include:

In addition, practice shows that at the moment it is not possible to completely switch to level learning of foreign languages due to many of the reasons mentioned, in teaching foreign languages at non-linguistic universities on a parity basis, there is both level and blended learning.

These deficiencies in level learning of foreign languages require further consideration by teachers and university management. Only when discussing with colleagues can we come to an agreement, find the right approaches to solving problems of level education and teaching foreign languages at a university.