Magnetron sputtering of cadmium onto molybdenum

In this paper, Mo-Cd compounds obtained by deposition in an ion-plasma installation were considered. For this purpose, a method is used for obtaining coatings with a nanocrystal structure using ion-plasma deposition of metals, followed by deposition on the substrate in the form of island films. Fundamentally new coatings based on molybdenum-cadmium Mo-Cd were obtained. For the first time, mo-Cd synthesis was obtained at a temperature not higher than 100 ° C and was carried out using the thennoflutination melting effect. The channeling effect was used to study the structure of single-cry stal samples using Rutherford backscattering spectroscopy. Based on the analysis of the spectra obtained at different orientations of the ion beam in the channeling directions, it is possible to obtain information about the crystal perfection of the studied sample. From the analysis of the value of the surface peak, which is the result of a direct collision of ions with surface atoms, you can get information about the structure of the surface, for example, about the presence of rearrangements, relaxations and adsorbates on it. The experiments were performed using an x-ray diffractometer, an electron microscope, and a cryogenic unit.

The constant growth of computer applications in all spheres of human life causes a great interest of the world economy in the development of integrated circuit technology. The development of such technologies is an extremely topical scientific and technological task, in which a huge flow of investments is directed. The main task at the same time is to reduce the cost of production along with the improvement of consumer characteristics, which include speed and specific energy consumption.

It is known that small metal particles have significantly lower melting points than their volumetric counterparts [1]. Therefore, it can reasonably be assumed that a decrease in the size of small particles can also positively affect the lowering of the thermal threshold of the molybdenum-cadmium formation reaction.

Ion-plasma sputtering of metals and their subsequent deposition on the substrate in the form of islet films is the most widely used method of obtaining coatings with a nanocrystalline structure. Island films refer to ultradispersed systems, the surface energy of which is comparable with the volume component. In this connection, particles in an islet film, whose dimensions are less than a certain critical one, may be on the verge separating the solid and liquid state due to so-called thermofluctuation melting [2]. And, if the use of the effect of thermofluctuation melting in the preparation of alloys is already being used [3], then there are no facts of the use of nanoparticles in heterophasic synthesis of compounds, for example, Mo- Cd-based metals.

Urgency of research. The relevance of this work is to obtain fundamentally new coatings, based on Mo-Cd. In this paper, it is proposed to obtain samples with different concentrations. I have studied the literature on this topics, and it can be concluded that the study of this topic did not take place, due to the complexity of the experiment. The difficulty lies in the various melting points, so it is not possible to obtain an alloy of these metals by the traditional method.

The novelty. That is the first time, where it was introduced the synthesis of the Mo-Cd at a temperature not exceeding IOOoC and was carried out using the thermoflutuation melting effect and the results of the investigation of the structure of the coatings are shown below. In this regard, the formulation of research is timely and relevant, and the results - new.

Today scientists all over the world trying to create materials, which will be having such characteristics as: superconductivity, small weight, toughness, etc. Molybdenum and cadmium have absolutely different structures and properties, also they have different temperature of melting. Temperature of melting for Mo is 2890 K and for Cd is 594 K. So we cannot combine them in traditional way, because the temperature of boiling for Cd is 1038 K and its lower then temperature of melting for Mo. I want to arrange an experiment, where I will combine this metals in ion-plasma set and asses its structure and characteristics. But for the first of all, I want to introduce physico-chemical properties of Mo and Cd.

Cadmium is an element of the twelfth group, the fifth period of the periodic system of chemical elements OfMendeleyev, with atomic number 48. Denoted by the symbol Cd (Latin - Cadmium). A simple cadmium material under normal conditions is a mild malleable ductile transition metal of silvery white color. Stable in dry air, in moist on its surface an oxide film is formed, which prevents further oxidation of the metal.

Table 1 Properties of Cd and Mo

X-ray structural analysis are methods for studying the structure of a substance by the distribution in space and the intensities of the x-ray radiation scattered on the analyzed object. (X-rays - electromagnetic ionizing radiation, occupying the spectral region between gamma and ultraviolet radiation within the wavelengths from 10-12 to 10’5 cm). X-ray diffraction analysis along with neutron diffraction and electron diffraction is a diffraction structural method. It is based on the interaction of X-rays with the electrons of matter, as a result of which X-ray diffraction occurs. X-ray diffraction is the scattering of X-rays by crystals (or molecules of liquids and gases) in which secondary deflected beams of the same wavelength appear as a result of the interaction of the primary X-rays with the electrons of matter from the initial beam of rays. The direction and intensity of the secondary beams depend on the structure of the scattering object. The diffraction pattern depends on the used wavelength of the X-rays and the structure of the object. To study the atomic structure, it is used length equal 1, i.e. the size of the atoms [4]. Waves X-ray diffraction analyzes metals, alloys, minerals, inorganic and organic compounds, polymers, amorphous materials, liquids and gases, molecules of proteins, nucleic acids and etc. This method is most successfully used to establish the atomic structure of crystalline bodies. This is due to the fact that the crystals have a strict periodicity of the structure and represent the nature-created diffraction grating for X-rays.

In addition, they must be very thin, since the flow of electrons is strongly absorbed by the object. In this connection, ultrathin sections with a thickness of 20-50 nm, placed on the thinnest films, are used as objects. The resolution of microscopes is significantly higher than light microscopes and reaches 1.5A (0.15 nm), which allows us to obtain more detailed photography.

The effect of channeling is used to study the structure of single-crystal samples using Rutherford backscattering spectroscopy. The effect is that when the ion beam is oriented along the main directions of symmetry of single crystals, those ions that avoid direct collision with surface atoms can penetrate deep into the crystal to a depth of up to hundreds of nanometers, moving along channels formed by atomic rows [5]. Comparing the spectra obtained by orienting the ion beam along the channeling directions and along directions different from them, one can obtain information on the crystal perfection of the sample under study. From the analysis of the magnitude of the so-called surface peak, which is a consequence of the direct collision of ions with surface atoms, one can obtain information on the structure of the surface, for example, on the presence of reconstructions, relaxations and adsorbates on it. 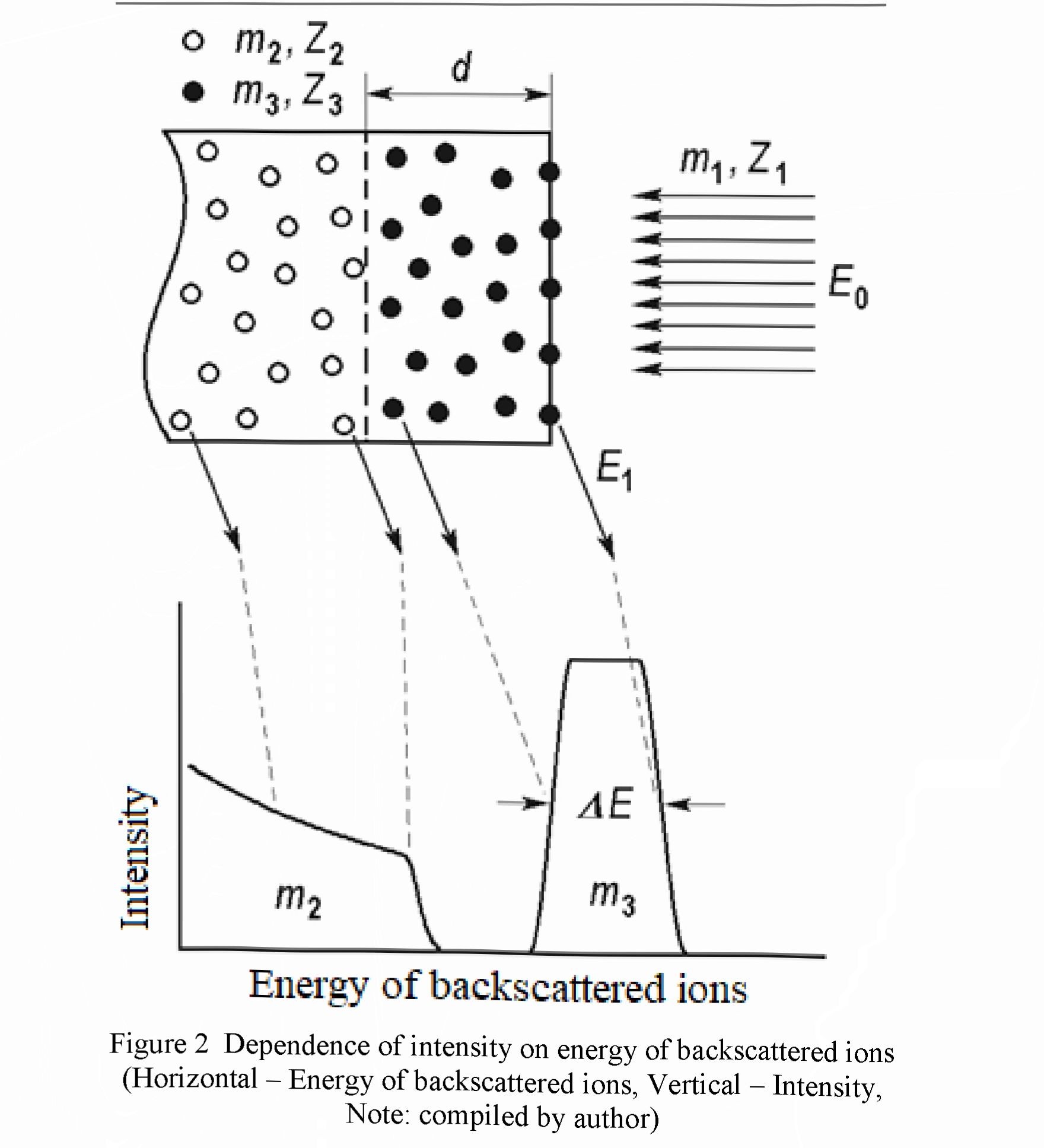 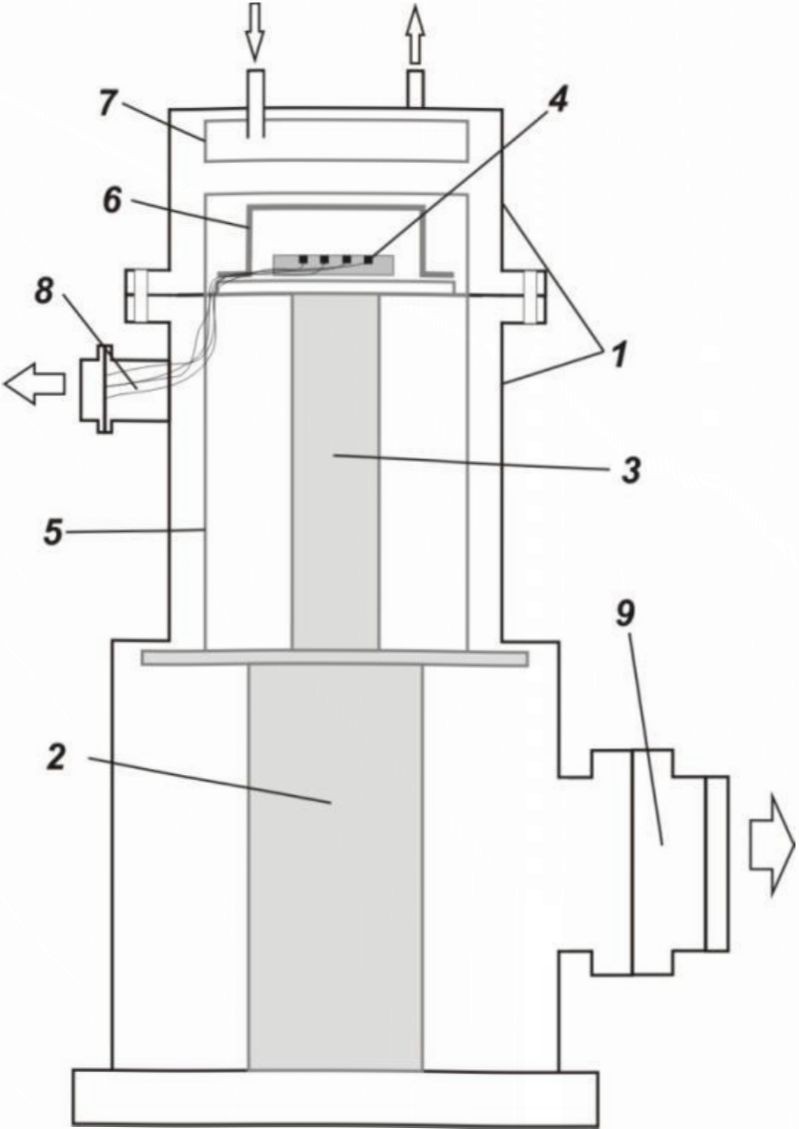 The pumping system used in the chiller is similar to the vacuum system for pumping a magnetron installation for the synthesis of coatings.

The cooling system consists of a casing 1, a two-stage cooling system closed by thermal shields 6, 5, and a measuring assembly 4 located at the end of the second stage of the cooler. To measure the temperature at the measuring assembly, a TBO thermistor of 0.125 1 kQ is used, which has an exponentially increasing resistance as the temperature decreases. The thermistor was calibrated with a number of reference samples of superconductors calibrated at the ISSP of the ChNC of the Russian Academy of Sciences (Chernogolovka, Russia) with critical transitions to the superconducting state at T = 16.5 K, 13.8 K, and 10 K. The thermal screen 5 of the first stage cooling is made of a copper sheet 0.4 mm thick, pasted with polished aluminum foil. The heat shield 6 of the second cooling stage is made in the form of a turning part made of copper with a wall thickness of 1.2 mm. The outer surface of the copper screen of the second stage is polished to the 13th grade Ofcleanliness.