Diseases of home dogs of population of petropavl city

Dogs, among other pets, are very popular. Currently, dogs are involved in almost all types of human activities: security, hunting, various search activities, guide dogs, companion dogs. However, dogs are quite often affected by contagious diseases, and many diseases pose a danger to humans as well (anthropozoonoscs). An analysis of the incidence of dogs with respect to the identified list of disease groups: infectious (of various etiologies), invasive (of various etiologies), non-infectious, surgical, gynecology and obstetrics is conducted. Non-communicable dog diseases account for about 90%; infectious and parasitic (invasive) diseases of dogs account for 10%. The main ways of transmission of infection are aerogenic and direct contact with a sick animal, which is the carrier of the causative agent of a certain epizootic. Among internal non-conununicable diseases, the frequency of occurrence is characterized by followed indicators: diseases of the cardiovascular system - 19%, diseases of the respiratory system - 37%, diseases of the digestive system of dogs - 44%. Characteristics of age, dog breeds for some groups of diseases are «vulnerable», often determine the severity of the disease, which is associated with physiological, genetic characteristics of the body. The importance of compliance with dog disease prevention measures (vaccinations, periodic medical examinations), a healthy pet lifestyle, proper nutrition are the main recommendations for dog owners.

Dogs, like other animals, are susceptible to a number of diseases that differ in symptoms, course of the disease and preventive measures. Along with this, it must be remembered that dogs are often affected by contagious diseases, while most diseases are dangerous to humans (anthropozoonoses). Most people containing dogs make mistakes in their feeding and grooming - this also causes the occurrence of diseases of dogs that are kept at home by the population of the city.

The objects of study are domestic dogs of the population of the city of Petropavlovsk. Studies were conducted on the basis of urban veterinary clinics.

At the initial inspection, general information is collected indicating the information: name, address of the owner of the animal; dog's nickname; the sex of the dog; dog age; breed; body mass.

During the examination, basic information is collected, based on which the diagnosis is made and treatment is prescribed.

The symptomatology of the disease is determined by the following data:

During a general examination, parameters such as the constitution of the animal’s body, its temperament, fatness, behavior, posture, gait, and body temperature are determined. The data obtained are processed, certain tests are prescribed, the results of which determine the disease and prescribe the necessary treatment.

Over a five-year study period, 4372 cases of contacting dog owners in veterinary clinics were recorded.

Analyzing the received data of receptions, it was revealed that the largest number of requests for specialized veterinary care was recorded in 2017. Veterinarians associate this, first of all, with a change in weather conditions, namely with a long period of elevated temperature and short-term rainy weather conditions. These climatic factors have a beneficial effect on the biology of some animal parasites. In most cases, dogs were infected with various skin parasites and infectious diseases.

An analysis was made of the incidence of dogs in relation to the identified list of disease groups in veterinary clinics: infectious, invasive, non-infectious, surgical, gynecology and obstetrics, other treatment of dog owners. The dynamics of the reversibility of dog diseases is presented in Figure 1. 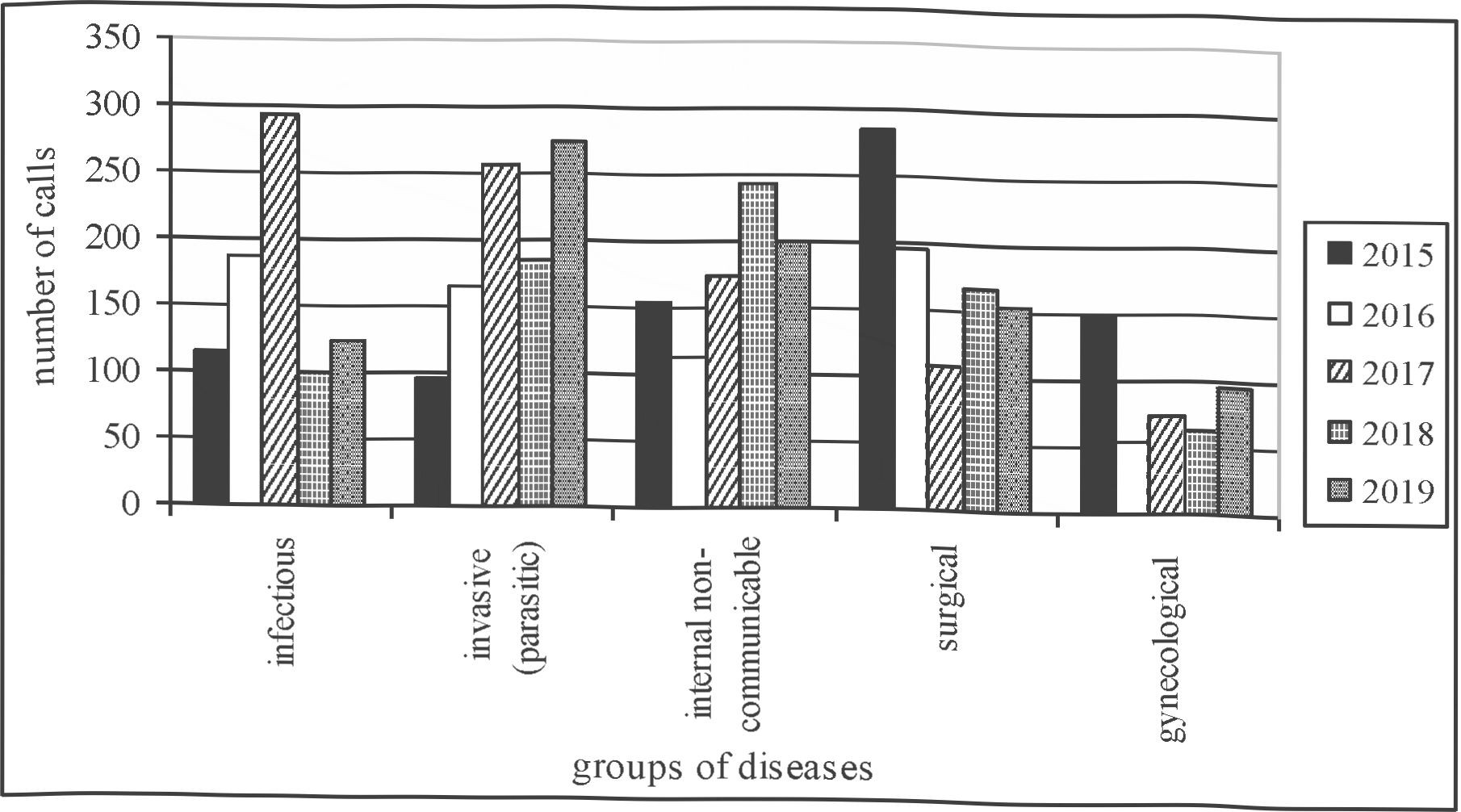 In the group of infectious diseases, 820 cases of manifestations of diseases with symptoms characteristic of this epizootic were recorded, which amounted to 20% of the total number of registered diseases. A high percentage of cases of infectious diseases occurs in 2015 - 36% of the number of doses for a given period of time. Among them there were diseases such as rabies, carnivore plague, Aujeszky’s disease and tuberculosis, which are transmitted from a sick animal by aerogenous or direct route. It should be noted that these diseases are not associated with the breed, sex or age of the animal. This group of diseases is dangerous for all dogs, but dogs with a weak respiratory system or impaired respiratory function are at risk. There have also been cases of infection of dogs with parvovirus enteritis and leptospirosis, these diseases affect the digestive system. Decorative dogs or companion dogs that have a delicate or raw type of exterior have these problemsThese include breeds such as English and French Bulldogs, Chihuahua, Yorkshire and Toy Terrier, Jack Russell Terrier, Shih Tzu.

The frequency of visits to veterinary clinics for the necessary assistance in the fight against ectoparasites is presented in Table 1.

During the study period, it was revealed that the largest number of requests for specialized help is in the group of protozoal diseases. The group of entomoses has the lowest number of registered diseases, since there are a sufficient number of pharmaceutical products that can prevent the spread of parasites of this type of invasive disease. If we consider each group, it should be said that any individual can be affected by these types of parasitic diseases, regardless of breed and gender, but there are differences in age periods, which is confirmed by the result of the analysis.

Analyzing the statistics of cases of helminth infections of these age groups, we can say that there is no strict relationship between a certain puppy's age and the time Ofinfection with his parasites. It should be noted only that between the moment of infection and the manifestation of the first symptoms, some time may pass. This is due primarily to the life cycle of the helminths themselves. In most cases, the first signs begin to appear after 2 months, since during this time the larva forms into a mature individual and then, depending on its location in the body, this organ is intoxicated with its products of vital activity and the manifestation of the characteristic symptoms of the disease.

The age-related characteristics of infection with such groups of parasitic diseases as cestodoses and nematodes have shown that puppies and young dogs are mainly affected by helminths. Other listed groups of invasive diseases do not have pronounced age characteristics and are dangerous for dogs of any breed, age or gender.

In general, preventive measures are aimed at preventing the spread of carriers of invasion groups such as protozoa, arachnoses, Sarcoptoidoses and entomoses. These groups of parasites are most common between animals, since the main route of transmission is direct - from a sick animal to a healthy one. 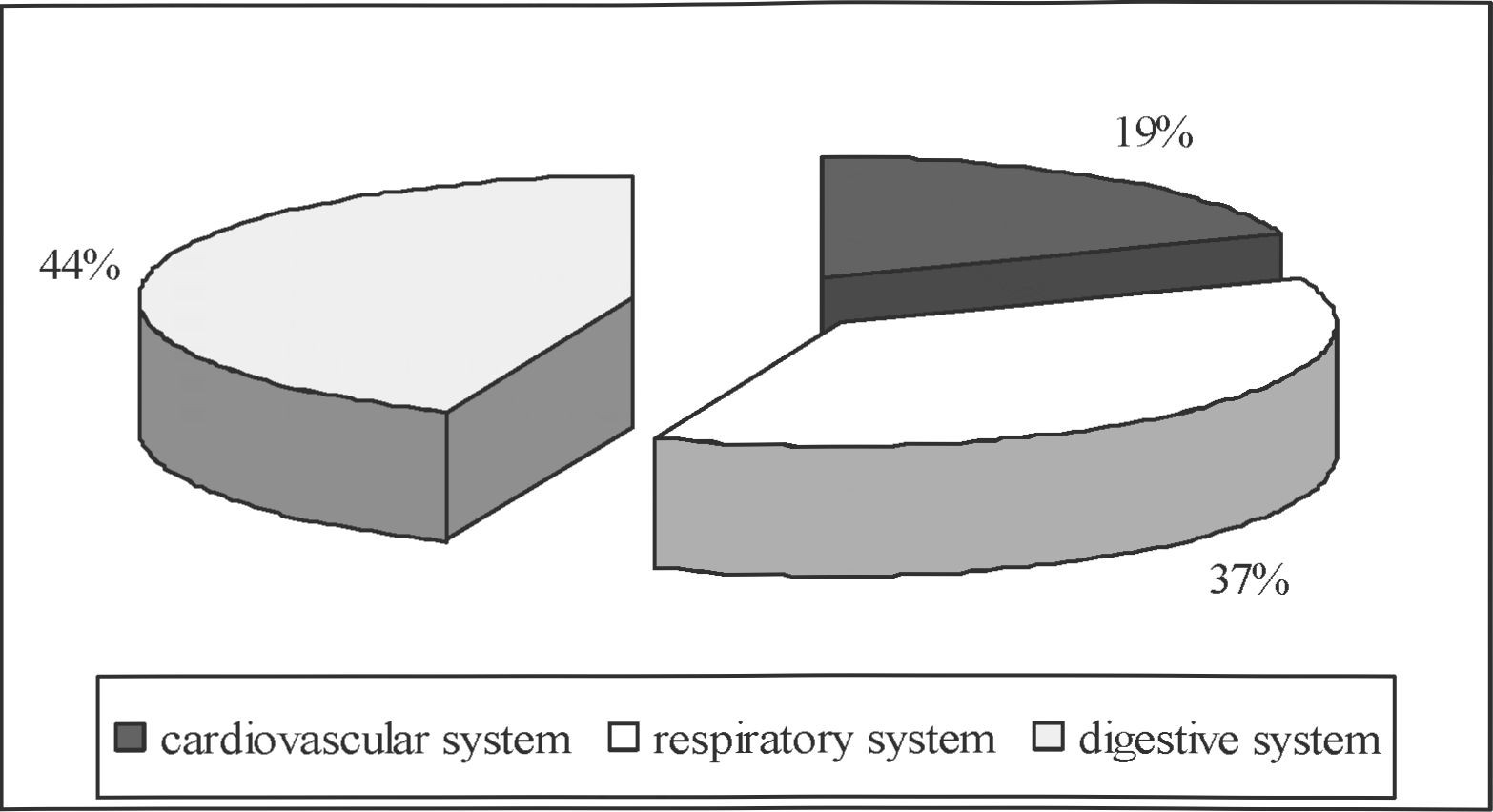 The most common are failures in the digestive system. Of the total number of registered non-communicable diseases during the study period, they accounted for 44%, and the number of visits was 389. Often, diseases such as stomatitis, mumps, pharyngitis, obstruction of the esophagus, gastroenteritis, peritonitis were recorded. It was noted that for this group of diseases there is a direct relationship between the course and severity of the disease with the age of the dog (Table 2).

As can be seen from Table 2, there are diseases characteristic of puppyhood: parotitis, pharyngitis, gastroenteritis. Diseases that affect adults: stomatitis, peritonitis.

The first group affects the young organism of the dog, since it is easier to act on it with any stimuli, for example, too hot or cold food, the presence of household chemicals in the animal’s bowl, and hypothermia of the whole organism.

Diseases, mainly found in adult dogs, have a peculiarity - the «cumulative effect» with prolonged exposure to the stimulus. A vivid example is the stable consumption of rough foods with stomatitis [3, p. 21].

Diseases of the respiratory system of dogs can occur at any age, but puppies or young individuals and old dogs are considered more susceptible, as in the previous group. Respiratory system problems mainly arise due to hypothermia of the animal’s body or as a secondary disease against the background of such as carnivore plague, tuberculosis, stomatitis. 332 visits to veterinary clinics with respiratory problems were registered, which amounted to 37% of the number of non-communicable diseases. Cases of diseases such as rhinitis, laryngitis, bronchitis, bronchopneumonia and pleurisy have been reported.

The causes of the development of such diseases of the organs of this system (myocarditis, myocarditis, endocarditis and pericarditis, heart defects and arteriosclerosis) can be various infectious diseases and intoxication in chronic infectious, invasive, gynecological, surgical and internal non-communicable diseases. Not the last place among the reasons is an unbalanced diet and insufficient or lack of vitamins, senile changes (atrophy of the heart muscle, obesity), anomalies in the development of the dog [3, p. 21]. Large dog breeds often suffer from diseases of the cardiovascular system: dogs, newfoundlands, saint bernards, boxers and dobermans.

For the prevention of cardiovascular diseases in dogs, it is necessary to observe a regime of physical activity. Regular exercise strengthens the heart muscle, helping the dog stay healthy for as long as possible. After 7-8 years, long walks and jogging should be reduced, as excessive activity is not desirable. Mandatory prevention of obesity.

910 dogs needed surgical help, this part is 23%; the remaining 10% of the total number of requests is taken by the group of gynecological diseases and obstetrics, with 436 requests for a given period of time.

A separate share of the number of visits to the veterinary clinic is taken by dogs that are not suffering from any disease, but those brought in to receive services such as cutting hair, claws, cleaning ears, etc. The number of cosmetic services provided to dogs over 5 years amounted to 344 visits and 8% of the total number of visits.

Compliance with preventive measures regarding the health of the dog as a pet, with a high degree of probability, can guarantee that the owner does not become infected with anthropozoon diseases.

The largest number of dogs that have not been vaccinated is in puppy age (up to 6 months), during which the animal is vaccinated. In the future, a dog that does not have acquired immunity in puppyhood to dangerous diseases often suffers from these diseases as an adult.

The basis for the prevention of internal diseases of dogs is: full feeding, quality of feed and water, optimal indoor climate, physical activity regimen, rational use of household chemicals, periodic preventive examinations by a veterinarian, if an abnormality in behavior or nutrition is found, an examination of the animal is necessary.