An important condition for improving the efficiency of forest resources management and forest exploitation is the availability of reliable information about the forest resource. The use of GIS technologies to solve various problems of economic activity significantly increases the efficiency of the process. The results of automatic processing of remote sensing data by photometric method are presented in the present work. The basis of the proposed method is the photometric analysis of terrain images obtained by unmanned aerial vehicles, with a detail of at least twenty centimeters per pixel. To determine the number of mature trees per unit area in the processing of photographic material the green channel is taken as a basis and the central upper part of the crown is determined by saturation index.

Comparison of the processing results with the data obtained by direct measurements shows their high correlation. Thus, both the advantage of using remote sensing methods in conjunction with GIS technologies and their Iiighproductivity and economic efficiency are revealed.

Among the forests areas of Northern Kazakhstan little forests or pegs (so called «kolky») dominate. 92% of such forest are irregularly scattered among farmland. The average stock of wood of the birch is 95 m3/ha, and in mature and overmature plantings of 125 to 130 m /ha. The average completeness of plantations is 0,66. The maximum yield of industrial wood does not exceed 40%. The average forest cover of the region does not exceed 6% and its increase is limited by the lack of free space in the state forest resource.

Farming in the birch forests is focused on the natural renewal of the coppice shoots. Considering that after cutting from 20 to 25% of stumps do not give shoots, each turnover promotes thinning of plantings. In mature and overmature plantations the average number does not exceed 600 trees per ha, and the growth renewal according to the current scale is considered satisfactory if 600-1000 of stumps per 1 ha give shoots. Consequently, the majority Ofcuttings have unsatisfactory renewal. The areas accumulation with an insufficient renewal, and burnt areas, periodic drowning, promotes the formation of thinned, unstable in the conditions of forest-steppe zone of plantations having low barrier properties, low quality barrels. As the forest generation increases (4-5 turnovers), they may disappear. In this regard, all forested areas of the region with natural origin, having a completeness of 0.6 and below’ forest vegetation conditions of III bonitet and above, it is necessary to restore artificially [1-

Considering the issue of artificial restoration of forests fullness, it was decided on preliminary crops of conifers under the canopy of mature forest outliers. Earlier research [5] has allowed to develop transfer technology of deciduous forests in the economic and environmentally sustainable more valuable mixed coniferous - deciduous forests with the quahty^of II bonitet and higher, the plantations completeness of 0,7-1,0, the stock of 180 - 200 m /ha and yield of timber on average above 60% (for coniferous above 85%). The effectiveness of the method is confirmed on 180 hectares of experimental crops, which are

now more than 50 years old. In 2017 a three - year grant of JSC «Science foundation» for the industrial implementation of this technology was received. A number of researchers [3, 6] in the regions adjacent to Northern Kazakhstan also came to the conclusion about the feasibility of transferring birch and aspen trees to mixed coniferous and deciduous plantations. There are also studies, based on a comparison of forest growing conditions in pegs with open areas of the state forest fund, which have long been used for afforestation, on the advantages of pre - crops for sparse forests.

In practice, for the North Kazakhstan region, artificial reforestation of birch cuttings and redines with conifers is a new direction in forestry production. It is essential to identify in the forest fund pegs with a completeness of 600 and less mature trees per hectare, which allows mechanized planting of coniferous preliminary crops.

A serious complicating factor is that the last forest management was carried out more than 20 years ago and the actual state of the forest fund is very different from that indicated in the taxation descriptions.

Based on this, the task of our research was as follows: to study the possibility of using remote sensing methods of the Earth by photometric method to determine the number of mature trees per unit area. The solution of these problems will automate the study of the state torest fund for the design of coniferous preliminary crops.

On the first stage the mature forest with the completeness of 0.6, designed in clear cutting, was defined by the taxation statements. Taking into account the inaccessibility and weak road network ot the territories of the Bugrov forestry, where the experiment is conducted, it is advisable to automate as much as possible the determination of the mature trees number.

To determine the number of mature trees per unit area NKSU employees used an unmanned aerial vehicle GEOSCAN - 101, which allows to obtain in one flight a picture of the terrain with a total area of about ten square kilometers with available detail of 20 cm per pixel.

Processing of the obtained material was performed by using software AgisoftPhotoScan. According to the results of processing (Image 1), reconciliation and identification of the areas of individual forest pegs was carried out, (Image 2) using the taxation description (Image 3). 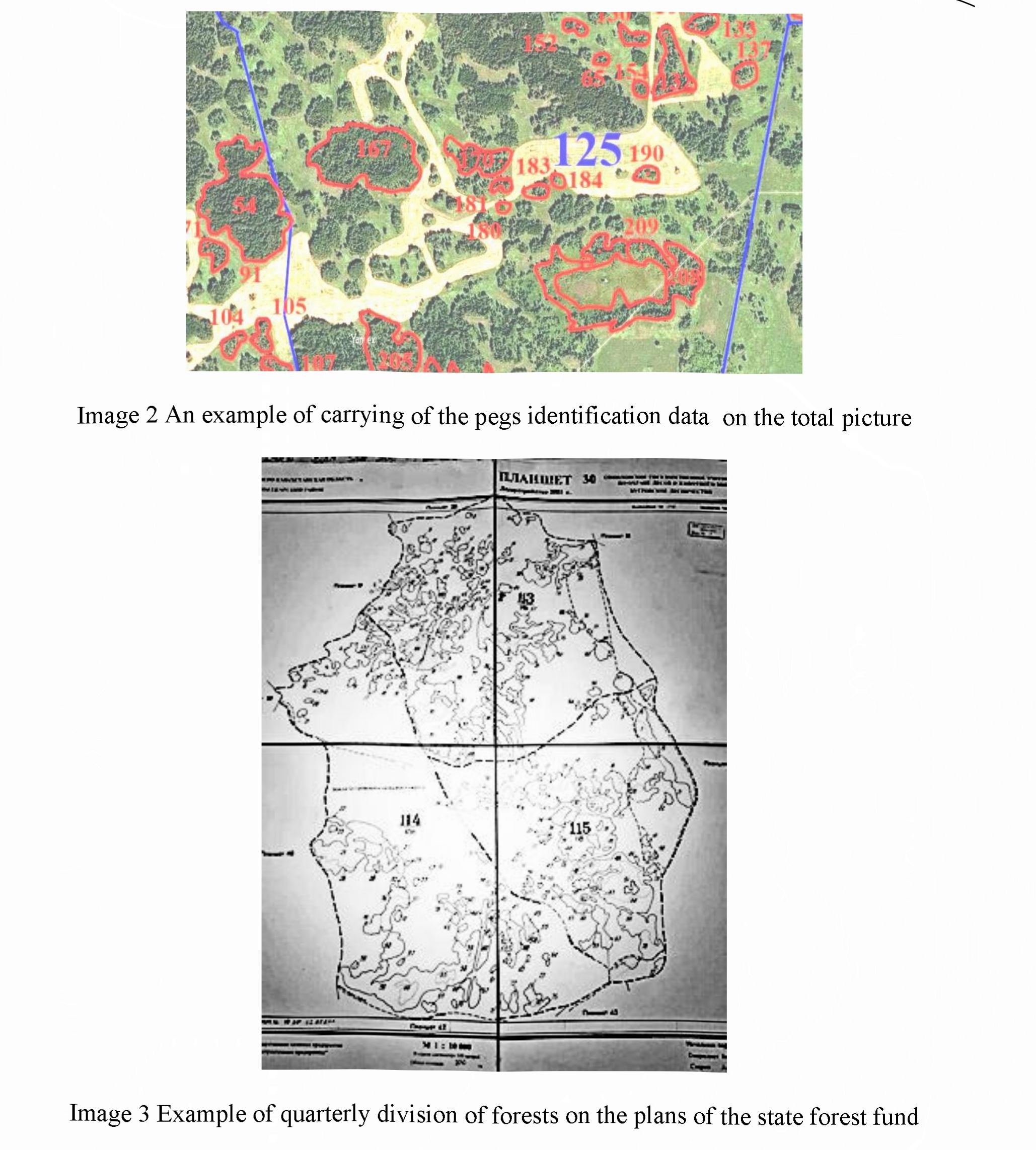 When considering the resulting image, it is possible to clearly identify the crowns of both stand - alone trees and those belonging to the forest zone (Images 4, 5). Further processing to determine the completeness of the forest was carried out with the help of a developed software application, that allows to select in the picture and count the total number of trees of a single peg and calculate the average density (number of mature trees per 100 m2). Images show examples of such processing with the display of the resulting data. 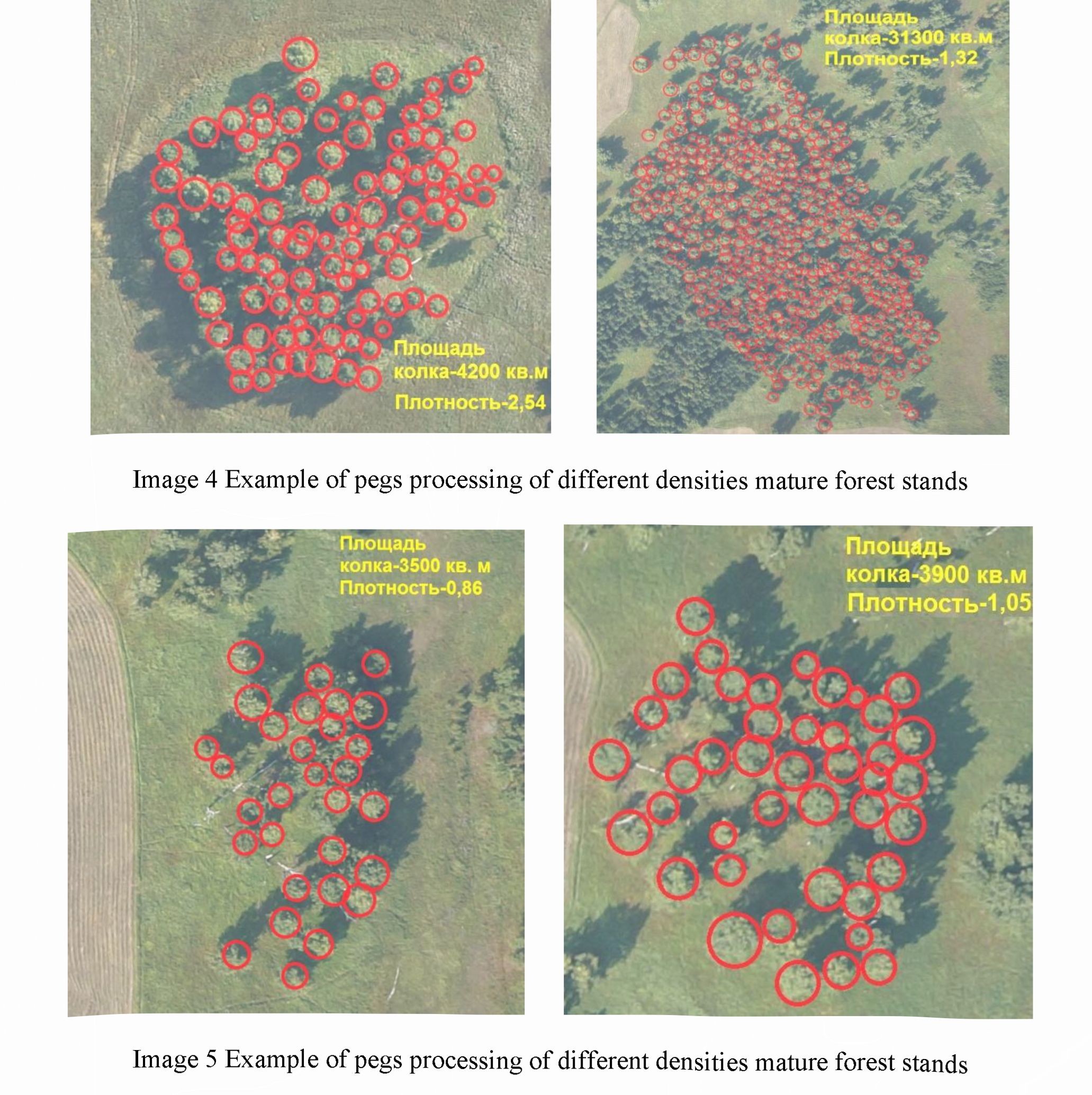 The obtained data correlate well with the data of the direct survey of the field expedition, which shows the high efficiency of the method used for forest survey in order to determine the completeness index.