The problem of flooding with the thawed waters of the Esil River is an extremely important task and requires special attention, since the Ialc evacuation of the population can lead to death. In recent years, there has been a spill of the Esil River before the expected date, which causes damage to human settlements and damage to agriculture, subsequently increasing financial losses. There is a need to develop new methods for studying the terrain in flooded areas, so that these methods allow us to see a more accurate picture of the alleged flooding before the onset of an emergency situation, with the possibility of preventing the consequences of: human, financial, agricultural losses. For a more accurate forecasting, the use of Agisoft PhotoScan. GIS Sputnik software is proposed to build detailed altitudinal mapping of flood zones with the melting waters of the Esil River.

The flood situation in the North Kazakhstan region requires special attention. According to the Department of Emergency Situations, in the region, 36 settlements are exposed to flooding from a high level of rivers, 41 settlements from meltwater and 15 settlements to a floodwater level in lakes. In Petropavlovsk, flooding is caused by the melting of snow. Several microdistricts of the city, such as Podgora, Kopai, Kozhzavod, Rabochiy settlement, Benzostroy, Zarechny settlement, are subject to flooding from thawed surface water. The latter is also susceptible to flooding when the Esil River overflows [1].

Analyzing the flood situation from the reports of the Committee for Emergency Situations of the Ministry of Internal Affairs of the Republic OfKazakhstan, reports of rescue services in the media, you encounter a reference to the unpredictable course of water. In 2019, the North Kazakhstan region, the water went through the crest of the dam of the Sergeevsky reservoir almost 15 days earlier than last year [3].

In this regard, it is important to anticipate in advance the flood situation, assess the areas of the spill, promptly warn the population, prevent possible damage by direct intervention of the services.

At the Department of Physics, analytical and software work is done to assess the flood situation in the DIS, ranging from assessing the extent of snow cover to direct forecasting of flood water through the territories. Using Agisoft PhotoScan, you can build a map of the height of the terrain. The program Agisoft PhotoScan implemented a modern technology to create three - dimensional high - quality models based on photogrammetry methods. To reconstruct the 3D model of an object, Agisoft PhotoScan allows you to use photographs taken by any digital cameras from any angle. For models with a given scale, Agisoft PhotoScan also allows you to measure distances and calculate surface area and volume. The model is scaled based on preliminary measurements within the reconstructed scene [four].

The previously filmed material was processed and analyzed with the help of the unmanned aerial vehicle GEOSCAN - 101.

Below is an example of the implementation of the Yesil river flooding in the Dolmatovo area.

The first is the construction of a 3D landscape map of the area using the program Agisoft PhotoScan. 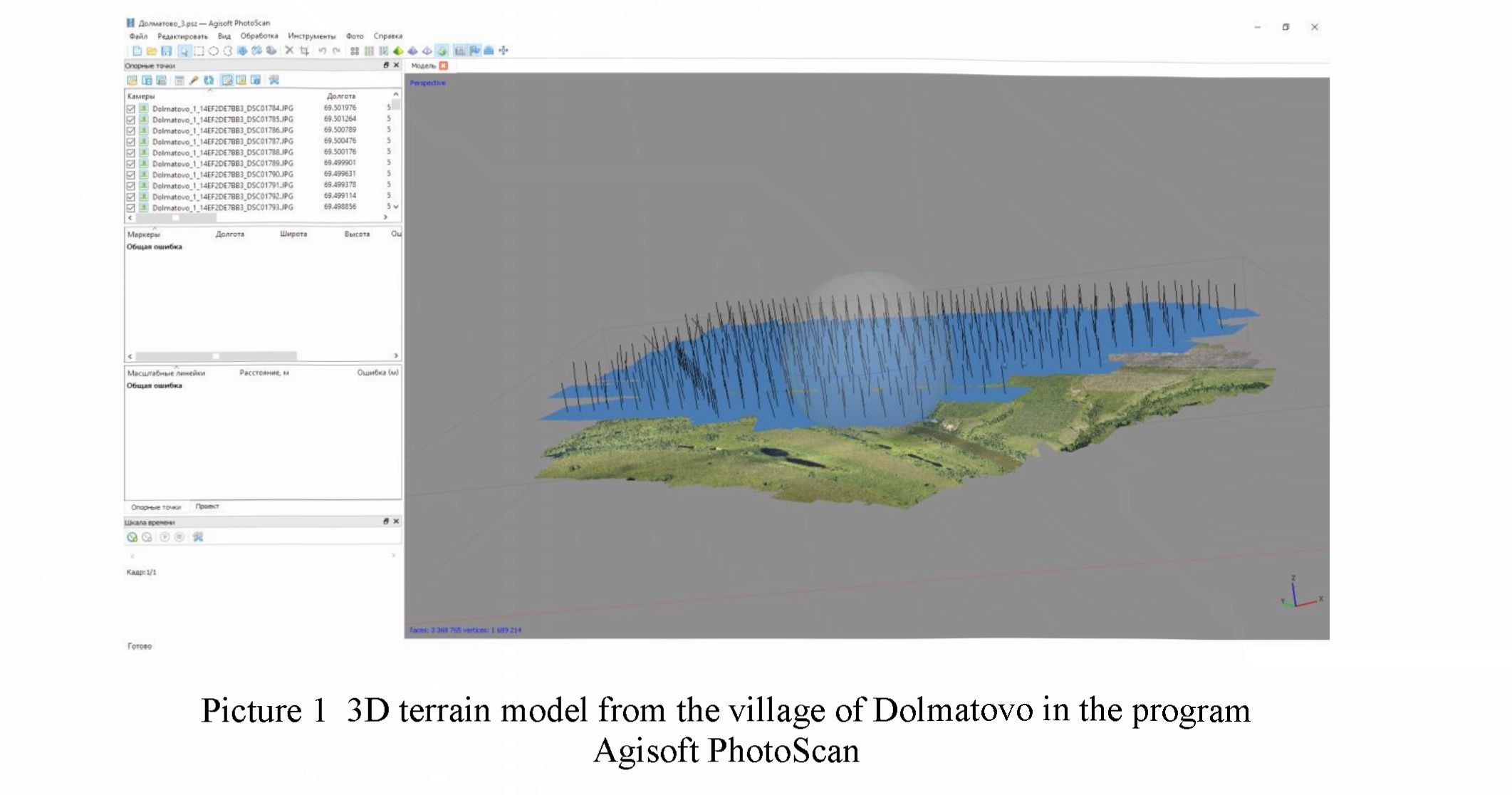 Below in the figure you can see that in the program you can make an approximation over the entire surface of the terrain (Picture 3).

Using this program in this area, you can select a landfill by the level of flooding, that is, select the area of interest in this map for further detailed analysis (Picture 4).

The program features allow you to show flooding zones using different colors, setting the height characteristic for each color (Picture 5). 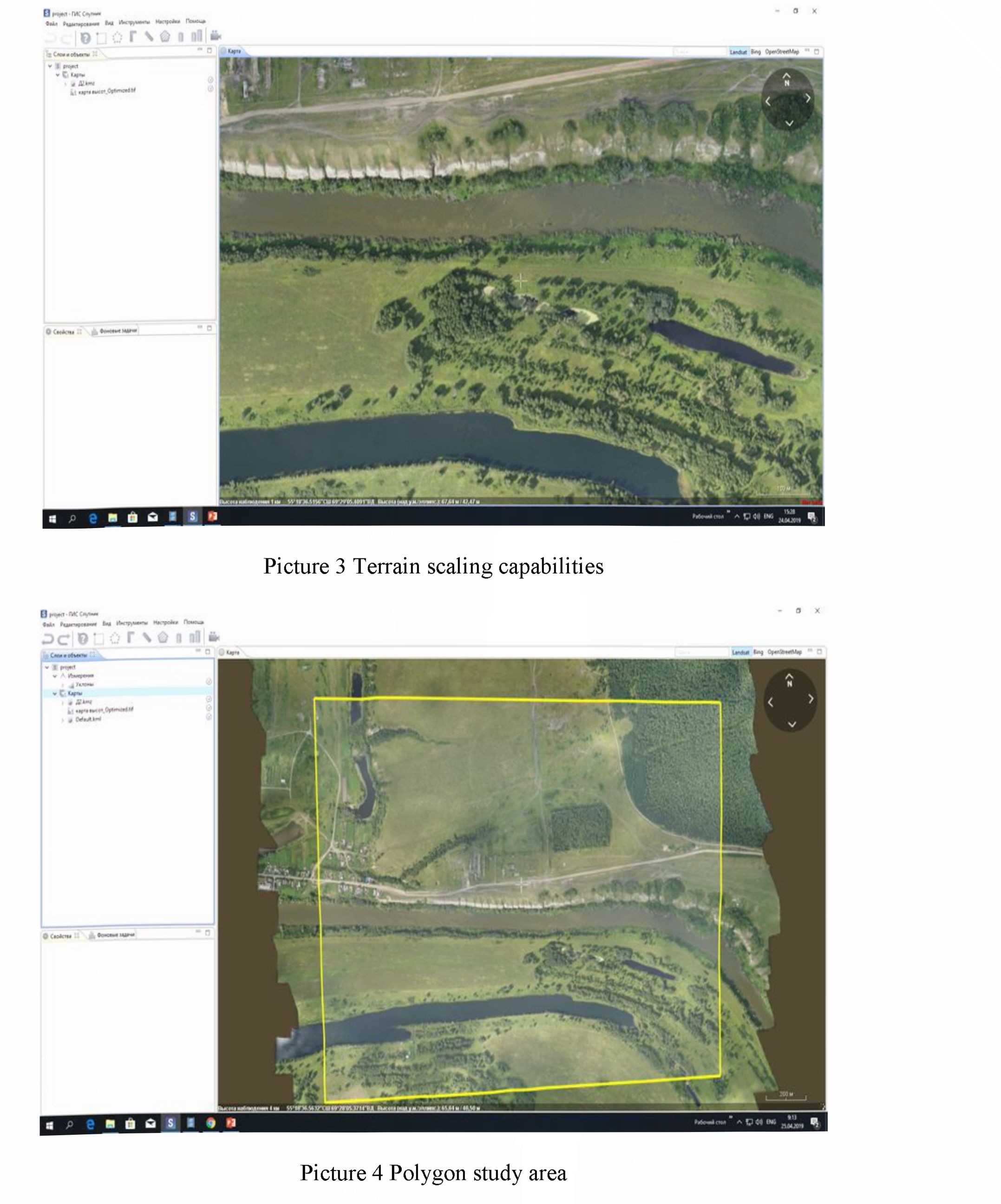 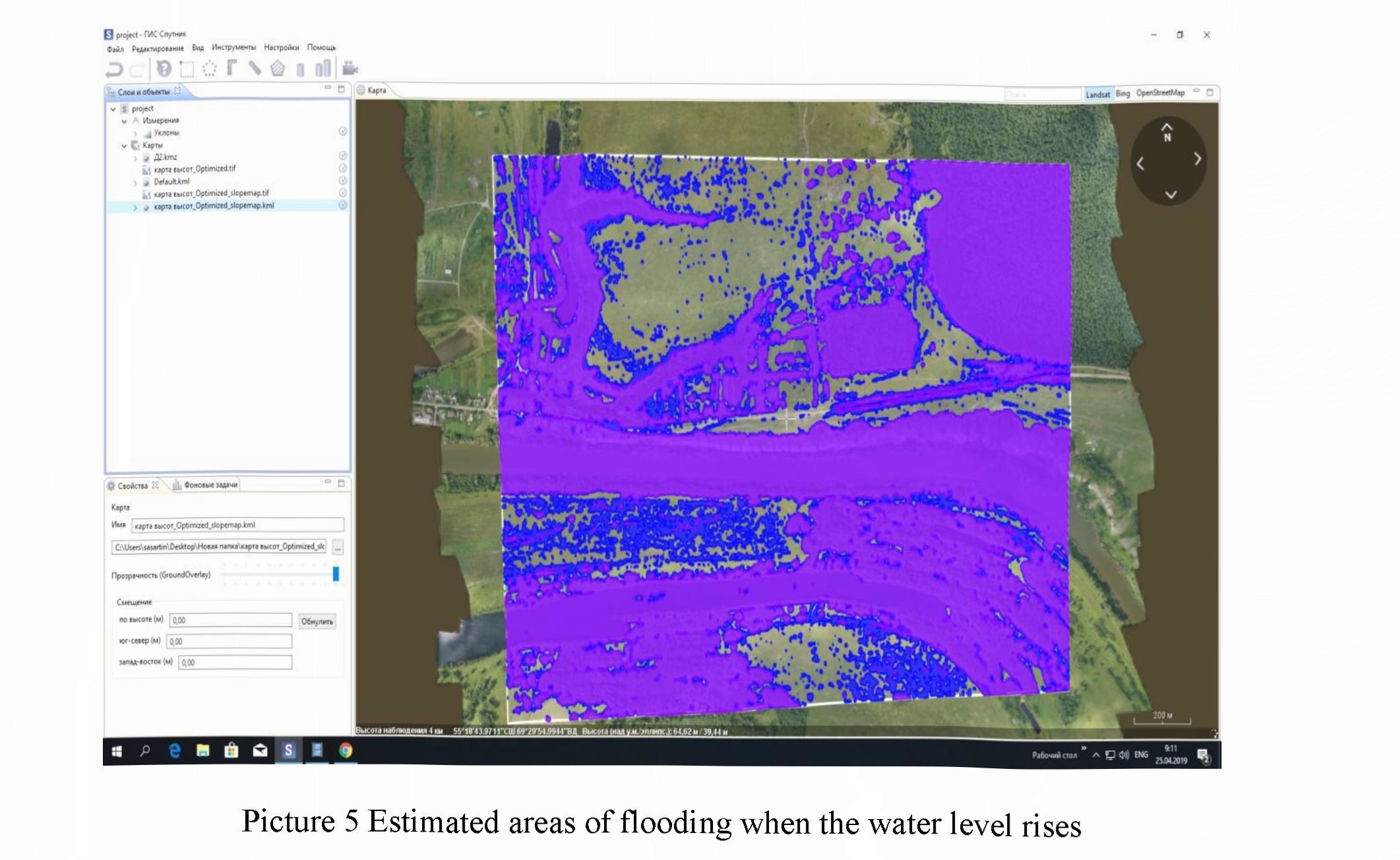 By varying the height of the selected Iandfdl and subtracting the initial water level in the Esil River, it is possible to estimate the flood area. Visualization of a possible spill allows you to analyze the most unfavorable forecasts, exposing high rates of flooding. Thus, this method allows you to pre - assess the risks of flooding and warn localities, emergency services, which would further reduce financial losses.