Using aconogonon divaricatum l. as forage crop in the system of cutting rotation

Traditional forage crops (maize, pea and oats mixture) are not sufficient for livestock farming needs in balanced low - cost fodder. However, the demand for fodder can be met using such forage crop as Aconogonon divaricatum L.

As a result of using Aconogonon divaricatum L. in the system of cutting rotation, during the budding - blossoming phase, the forage mass rated 53.2 t ha"1, but during the blooming phase it was 49 3 t Iia"1.

Aconogonon divaricatum L. is used for the nutritional forage production. So in the budding phase crude protein content was 12 6 %, as protein supply of one fodder unit accounted 138 g'1.

With the development of livestock farming in Northern Kazakhstan, it is necessary to extend and complement the food base with available highly balanced fodder. Along with com [1], pea - oat mixture [2], Aconogonon divaricatum L. [3] of buckwheat family (Poligonaceae), can be introduced as forage crop (Fig. 1). 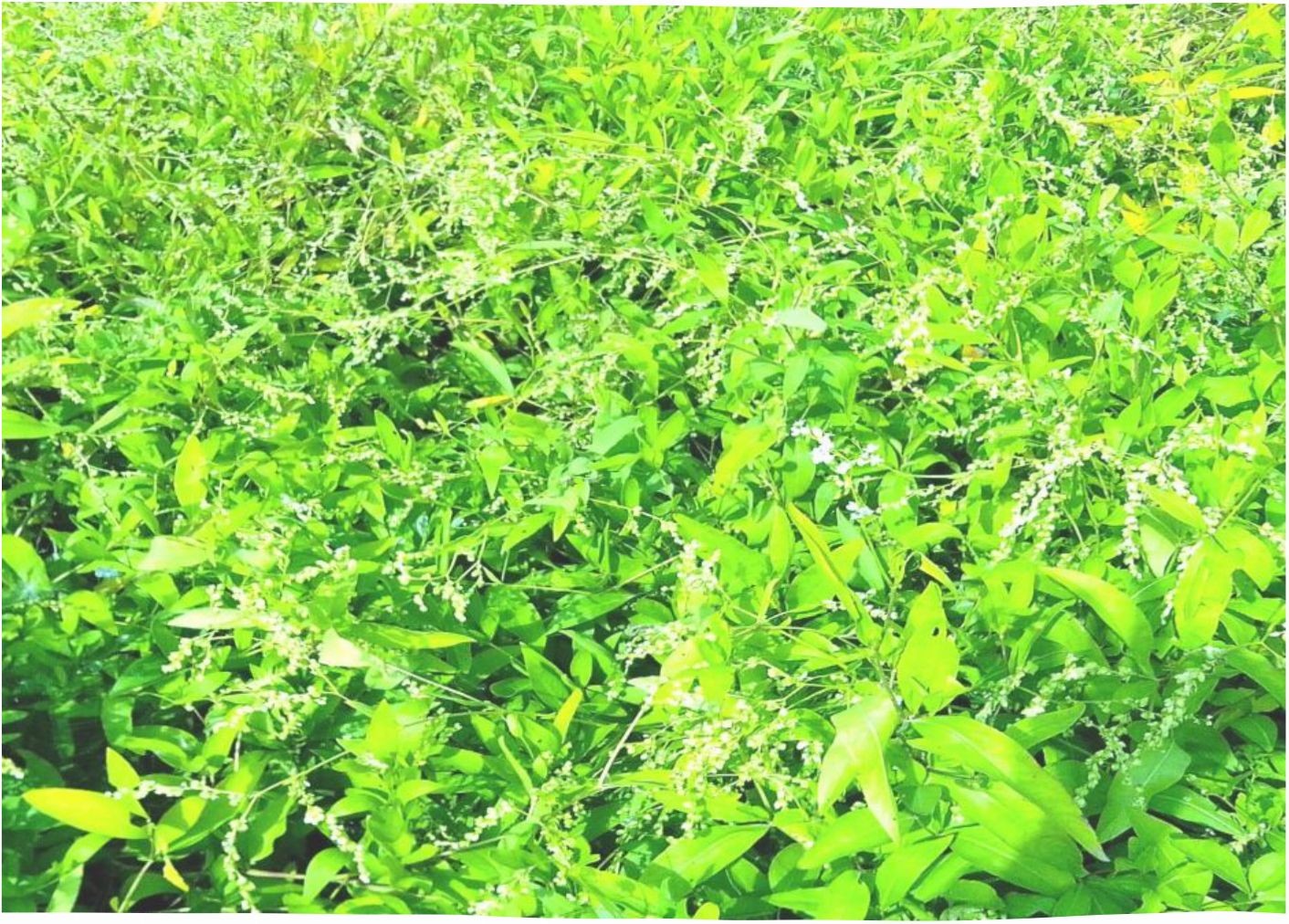 Aconogonon, as perennial crop (10 - 12 years), forms a stable crop over the years. Aconogonon life span gives the opportunity to pay off the expenses in 2 - 3 years of cultivation.

The history of introduction Aconogonon divaricatum L. in North Kazakhstan was as follows. In 1980 s it was being researched as a perspective forage crop and highly recommended for cultivation in forest - steppe zones. In the steppes, in the period from 1990 till 2006, much attention was paid to the development of cultivation technologies for forage crops. As a result, double - cutting use of Aconogonon in the cutting system was considered. Scientific novelty of the research is the increase of crop and improvement of the quality of raw materials for fodder production using Aconogonon divaricatum L.The aim of the research is to develop the technology of the rational use of Aconogonon divaricatum L. in the cutting rotation system.

The objectives of the research are:

The scientific research was carried out during 2002 - 2013 in the conditions of semi - arid steppe of North Kazakhstan.

Climate and Soil conditions of the steppe zone of Kazakhstan. On the border of the West Siberian Plain and Kazakh Upland, there is semi - arid steppe. The zone is located between 53° 16' north latitude and 69°23' east longitude. Total active air temperature (over IOoC) is only 1900 - 2200°C. The frost - free period is 3 3 - 3.8 months long. The annual precipitation rate is 300 - 350 mm. The region is characterized by strong, dry south - westerly winds that can reach 5-20 ms.

The research methodology. The method of the research is the field study, "cutting rotation for using Aconogonon divaricatum L. as raw material for fodder production." The material of this study is Chaglinsky variety. The field study was conducted in the time period from 2002 to 2005.

Experience placement was conducted on the recommendations [4].

In the space [6]: the first (2002 - 2005) through twelfth (2013) years of life. The area of the experimental plot (Aconogonon divaricatum L. plant stand) was 70m2. The experiment was repeated three times, using randomised plot arrangement.

Zonal technology for plant stands formation. Aconogonon divaricatum L. was sawn after soft spring wheat in close - fallow crop rotation. In autumn, the soil was fertilized applying 40 - 60 t ha4 and cultivated [7] using Lemken Smaragt Gigant 1000 as deep as 20 - 22 cm. In spring, the soil was tilled with Morris Field Pro at 3 - 5 cm depth. In May and June the soil was treated with Concept 2000 at a depth of 3 - 5 cm. Seeds were sown with the norm of 25 kg ha 1 (250000 viable seeds per ha ’) and row spacing of 30 cm using planter Morris Maxim II to a depth of 2 - 4 cm. Treatment of the crops in the first year of life included pre - emergence harrowing with Morris Field Pro at a depth of 3 - 5 cm. Also, 2-3 inter - row cultivations with Concept 2000 were applied due to intensive weed growth. From the second to the twelfth year of life (2003 - 2013), soil surface was treated with fertilizer NH4NO3 (60 kg ha4), Ca (H2PO4)2 H2O (60 kg ha4) AmazonelOM. Plant stand was harrowed with Morris Field Pro to a depth of 3 - 5 cm. During the growing season, the aisles between rows were cultivated several times to prevent compaction and soil contamination. The forage mass was collected with Claas Jaguar 830 RU 600, with Rollan trailer. The cutting height of plant stand was 10 - 15 cm. Later, Aconogonon stands were fertilised with NH4NO3 (60 kg ha '), combined with Ca (H2PO4)2 H2O (60 kg ha4), KCl (60 kg ha4) Amazone 10M.

Calculations and observations during the experiment. Field germination and Aconogonon preservation (in %) was determined by means of plant calculation during plant shoot and blossoming phases. The survival rate was calculated according to the number of plants that survived to the harvest from the total amount of sown germinating seeds. For 70% of the plants, phenological observations were carried out at the beginning of vegetative phases. The harvest (t ha4) was determined by weighing solid forage mass compared to its weight after drying (biomass). Experimental data were treated using dispersion and correlation analysis (version 14.0.6112.5000, Microsoft Excel 2010, © Microsoft Corporation) [8].

Zootechnical analysis of fodder was carried out in compliance with the National Standard norms related to fodder, combined fodder and raw forage materials. Calculation of the nutritional value of fodder was conducted in the following way: the output of fodder units and digestible protein was determined taking into account the digestibility coefficients [9]. Economic efficiency of cultivation of Aconogonon divaricatum L. was calculated on the basis of a technological chart. Output of fodder units was evaluated at standard cost of t4 of oats per $ 170.

In the second year of life, shoots developed from the buds. Density of Aconogonon plant stand increased by 3 05 times, preservation by 128 times, survival by 3 92 times in comparison with the first year. During three years of observation, the inter - phase period from shoots to blossoming took the crop 137 days [10].

Double - cutting use of forage mass in the system of cutting rotation. Aconogonon divaricatum L. rational use technology is cutting the forage mass during specific harvest periods [11]. The first period (bud and flowering phase) and the second one (the flowering - flowering) were rotated over the eleven years of use in cutting rotation system. In harvest period ofbudding - flowering the crop of forage mass was 54.5 t ha4, (Table 1), or 32.1 t ha 'for the first harvest and 22 4 t ha4 for the aftermath.

Rational use of herbage allows to increase crop before the sixth year of plant life to an average of 63.0 t ha , can be used for 11 years, yet with a lower crop.

Rational plant stands care technology. After the fifth year of life slotting 5, 6 was applied by the width of 70 cm and the depth of 20 cm with simultaneous application of NH4NO3 (60 kg ha 1X Ca (H2PO^2 H2O (60 kg ha4), [12], in re-growth phase Amazone 10M. After eight to ten years of life, in the phase of re - growth, the crop was treated with gypsum to prevent soil salinisation.

Then cultivation was carried out at the depth of 20 - 22 cm with Lemken Smaragt Gigant 1000. In case of stagnation of water in the soil, it can be drained to avoid root decay. Strips of grass were left uncut: 50 - 60 cm wide at a distance of 4 - 5 m for the purpose of self - seeding, snow retention, avoiding of degradation of plant stand.

The weak dependence of the crop of forage mass on the temperature and the presence of sediment in the soil is demonstrated by the multiple correlation coefficient Ry*xz = 0 22 (Fig. 2).

Zootechnical fodder analysis. Preparation of fodder for the winter period should be conducted taking into account the stability of crop and high nutrition value of the crops. The crop Ofbiomass [13], differed depending on the harvest periods. So, during budding - blossoming period, dry matter content in the first harvest in the second year of plant life was 13 %, which had an impact on the output of biomass of 4 2 t ha 1.

The flowering period of harvest - flowering, in the third year of life it was, respectively, 16 % and 5.6 t ha '. The aftermath contained 15 5 % of dry matter, and the proportion of biomass during budding - flowering rated 3.4 t ha i.e. more than in the period of blooming - flowering (2 7 t ha x). 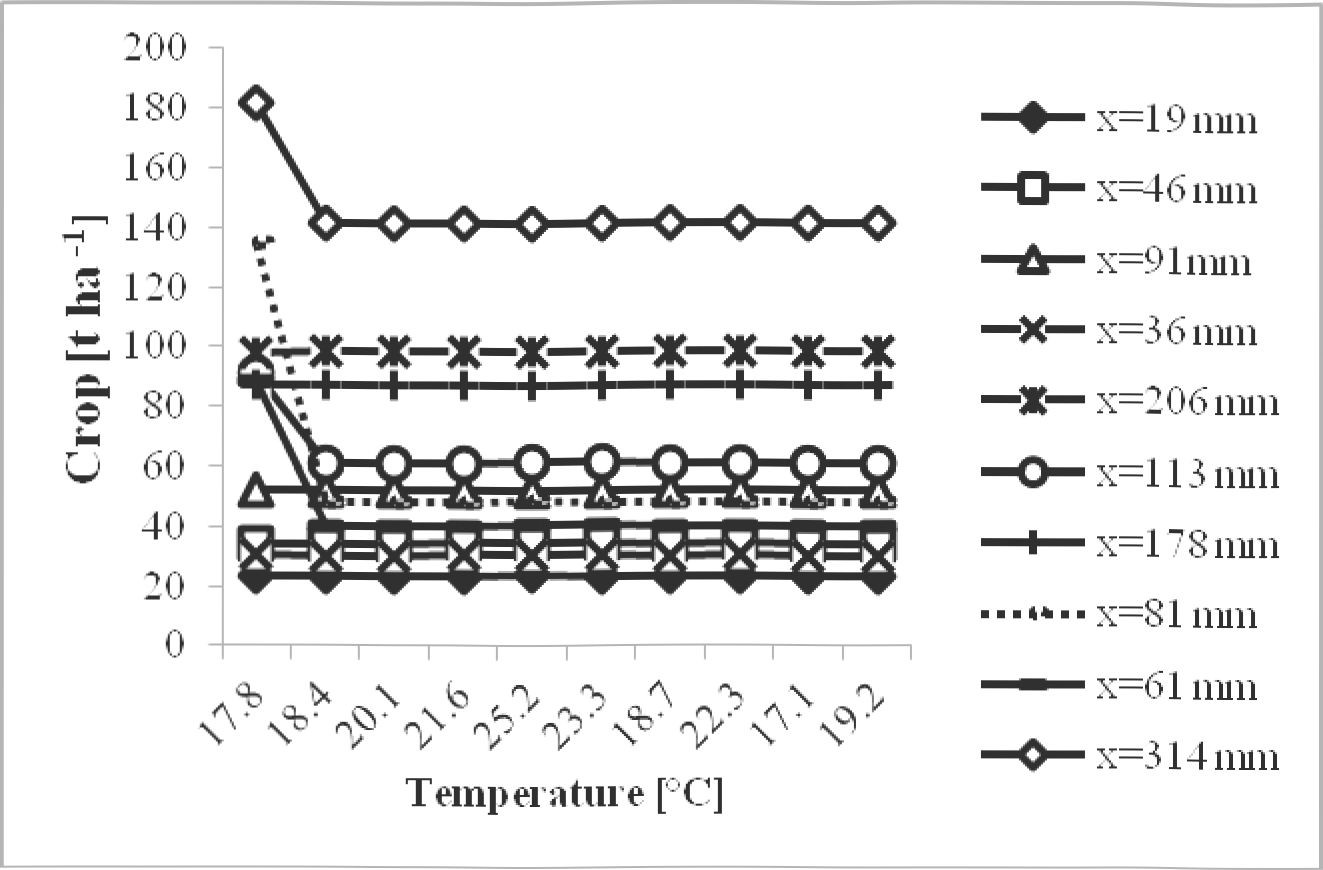 The quantitative content of the chemical composition of the components determines the fodder purpose. During the period of budding, resulting from high foliage - 50 % [14], the fodder contained 12.6 % of crude protein and 16.0 % of fiber, which is used in the production of dry vitamin fodder. During flowering, the fodder contained 113 % of protein and 17 3 % of crude fiber. During this period the forage mass is used for conserved fodder production. Nutritional value of fodder. Nutritional raw materials is reflected in fodder unit output, which rated 3.9 t ha 1 in the first harvest, and 3. It ha 1 in the aftermath. Protein content for on fodder unit in the bud phase (138 g ') was higher than in the blossoming phase (122 g '). Fodder is recommended to be prepared using certain technologies [11]. Feed quality (vitamin - grass dried forage, haylage, silage) is approved by the National Standard: 18691 - 88 [15], 23637 - 90 [16], 23638-90 [17].

Discussion. Crop Aconogonon Divaricatum L. of cutting rotation. Diversification of grassland management (control mode) is recommended as a tool for conservation of different taxonomic groups, including the genus Polygonum [18]. To satisfy the animals need in vegetable fodder it is necessary to enlarge and support the botanical composition of grass canopy [19].

The main evaluation indicators of cutting rotation is crop harvest, if it has been steadily increasing over the years, the efficiency of its use is high [20]. The ratio of generative and vegetative stems of Aconogonon is 52 to 48 %, which affects the crop structure. According to the recommendations [21] it is better to grow it during the whole season on special pastures with side - dressing, fertilizers.

Nutritiona of fodder. The analysis with the help of spatial autocorrelation for practice changes ofbiomass showed that the changes within 10 m on the straight line gave the positive correlation, which indicates topographic tendency ofbiomass [22].

By maintaining the balance of nutritional value along with the cutting of grass, also animal grazing can be used [23] to provide stable production ofbiomass [24].

Aconogonon Divaricatum L. is satisfactorily eaten by animals in the early development; therefore the food - value of raw materials is got by the cutting method in the period of maximum content of nutrient components. Double cutting use in the cutting rotation provides a long production of biomass.

The croping capacity of a dry material can be valued by a non - destructive method, based on the logarithmic transformation of sensor measurements [25]. In conditions of Northern Kazakhstan dry matter was defined by the method of sample drying under the temperature of 60°C in the drying closets till the permanent weight and compared between cutting phases of development, Aconogonon years of life, by the method of correlation analysis.

Aconogonon - based fodder in the balance of proteins is close to that made from alfalfa [27], and meets Zootechnical norms for livestock feeding (105 -IlO g ').

To improve the productivity of agricultural animals, it is recommended to vary the fodder ration to be included in the feed, both from traditional forage crops of North Kazakhstan with addition of Aconogonon divaricatum L. and its long - term use in the cutting rotation system.

The technology of rational use of the crop is based on the following requirements:

Achiowledgements. For assistance in conducting scientific research collectives to thank above enumerated organizations. The scientific research was carried out within the framework of “Feed” program, state registration number is 0101RK00381. Authors have no conflict of interest.