On the method of averaged inertia at hydrodynamic lubrication with fluid inertia effects: a review

The effect of fluid inertia is one of the extensions of the classical hydrodynamic theory of lubrication. The researches on hydrodynamic lubrication considering the effect of fluid inertia at lubrication of journal bearings are reviewed briefly. The emphasis is on the main approaches for the solution of the governing differential equations including the fluid inertia terms. In the paper is considered the most used technique in this field namely the method of averaged inertia. A short description of the method is presented and some important conclusions are drawn.

It is well known that according to the classical theory of hydrodynamic lubrication, based on the conventional Reynolds equation, the fluid inertia forces are considered smaller compared to the viscosity forces. At high surface velocities, however, the inertia forces of the viscous lubricant have a significant role. Their neglecting at relatively high modified (called also generalized or reduced) Reynolds numbers makes the model more imperfect and leads to incorrect values of hydrodynamic pressure. However, there is a significant list of applications where both temporal and convective inertia effects are important and can affect the analysis of fluid film bearings. These include high surface speed applications, low viscosity lubricants,

shock loads in bearings, squeeze film dampers under impulsive loads, and others.

Based on the above mentioned a significant interest in the development of the hydrodynamic lubrication theory represent the cases in which are taken into account the quantitative and qualitative effects of the convective and temporal inertia terms in the Navier-Stokes equations of the viscous lubricant fluid.

The analysis Oflubricant films to include inertia effects has occurred over a long period of time. Some initial efforts to define laminar, transition, and turbulent regions of lubricant flow in journal bearings are reported by Pinkus & Sternlicht in their fundamental book on hydrodynamic lubrication [1]. This approach was extended after that by many authors.

The present paper aims to make a short review of the previous researches on hydrodynamic lubrication considering the effect of fluid inertia. In the theoretical modeling in this field, different methods are regularly applied. In the paper one of the most popular of them, the method of averaged inertia is presented and discussed.

With the usual assumptions of thin film lubrication theory the governing differential equations for an incompressible fluid are the Navier-Stokes momentum equations and continuity equation:

The left-hand side in Eqns. (l.a) and (l.c) are the contributions from the inertia forces which disappear in classical theory of lubrication. In these equations u,v,w are the fluid velocity components in the x,y, z directions, respectively, where у is the coordinate across the fluid film thickness. The fluid pressure is p, the dynamic viscosity 77, the density p, the time t.

For the solution of the governing equations (1) the authors use several approaches, also called methods, as the method of averaged inertia is one of the most used ones. By applying the appropriate method of the solution of Eqns. (1) the modified Reynolds equation for hydrodynamic pressure distribution can be obtained as well as the static and dynamic characteristics of the bearing can be determined.

This is the most popular method for obtaining the extended form of Reynolds equation including the effects of fluid inertia. This method consists of replacing the initial system with an approximate system equations obtained after averaging the inertia terms across the fluid film thickness In [2] Slezkin & Targ apply it to the onedimensional steady state case described by the equations:

In [3] Poletskiy try to find a better accuracy in the solution of the steady state I-D problem by replacing only the first of the two derivatives (6z//Sr) with the averaged across the film thickness its value. Here also, as in many other papers to the current time, it is assumed a linear variation of the radial component of the velocity across the film thickness, i.e. v = ao+aly. Finally, it was found that with the increasing of the

Reynolds number the Sommerfeld number also increases. Furthermore, the author concludes that the equilibrium position of the shaft centre is determined not only by the relative eccentricity, but also by the Reynolds number. This is actually established CxperimentallybyNewkirkin 1932.

The considered method is applied also by Burgvits & Zavyalov in [4] to solve the I-D unsteady state problem.

The method of averaged inertia is used by Osterle, Chou & Saibel [5] for the solution of the steady state problem for infinitely long bearing as well as by Constantinescu [6] and other authors later.

included independent from each other using an averaged velocity over the lubricant film approach and maximum length theory.

In [6] it is considered the case of turbulent lubricant flow, as the equations of

motion for steady state flow and for the unsteady films have the following forms, respectively:

According to some authors, this means that in journal bearings the convective fluid inertia effects can be neglected in the range 0<Re* = (Zv/Z,_)Re<10, [9]. Although at the upper border of this interval convective inertia effects occur, they remain small compared to the other, for instance thermal distortions effects.

This averaged inertia method is used also by Burton & Hsu [10], King & Taylor [11], Launder & Leschziner [12] as the most serious assumption is the negligible influence of fluid inertia on the velocity profile.

By using the method of averaged inertia in [13] Alexandrov proposes a solution for the case of I-D steady state motion of the lubricant flow in the hydrodynamic bearings taking into account the elastic deformations of the bearing surfaces. The author obviously prefers this method, using it in the majority of his studies [13, 14, etc.] with solutions to various elastohydrodynamic problems in which the fluid inertia influence is bearing in mind. The same approach is used also by Javorova [15, 16, etc.] for the 2-D problems solutions for the effects of temporal, convective and full inertia terms of the fluid under the conditions of bearing surfaces deformability.

In [17] Szeri gives one more general solution of the problem by applying the same method. The presented study can be used to a case of a squeeze film damper and it is based on the paper [18] for the linear force coefficients of the damper. The other “averaged inertia” analyses applied to squeeze film dampers are suggested also by San Andres & Vance [19] and Zhang et al. in [20].

Tichy & Bou-Said [21] extended the formulation of the Reynolds equation to include impulsive loads for the first time. They used the method of averaged velocity and incorporated temporal and convective inertia effects in the laminar regime. The additional terms include both additional squeeze velocity and squeeze acceleration terms. In the paper are presented example analyses for pure squeeze film loads, short bearing pressure profiles, and some rigid rotor transient response plots with and without the additional temporal and convective inertia terms.

The paper of Dousti et al. [22] extends the theory originally developed in [21] for impulsive loads to high reduced Reynolds number lubrication. The incompressible continuity equation and Navier-Stokes equations, including inertia terms, are simplified using an averaged velocity approach to obtain an extended form of short bearing reynolds equation which applies to both laminar and turbulent flows. A full kinematic analysis of the short journal bearing is developed. 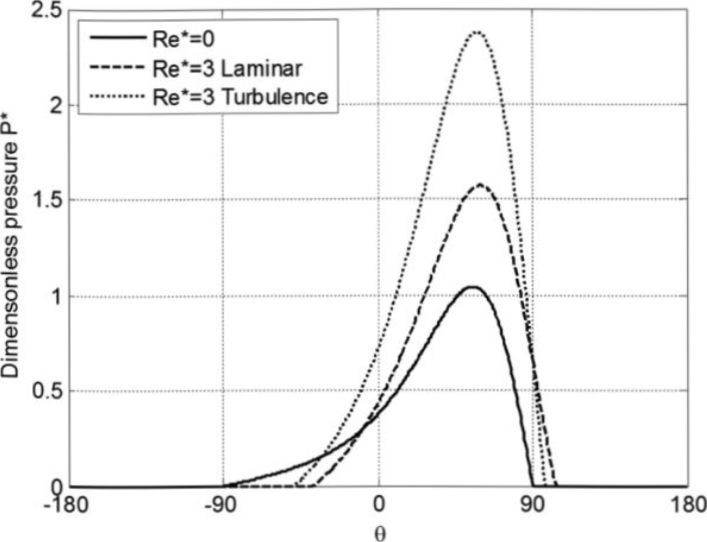 Figure 2 Pressure profile at different Re* under laminar and turbulent regime, [22]

The theoretical work of Prasad et al. [24] describes the combined influence of surface roughness, thermal and fluid inertia effects on performance characteristics of hydrodynamic journal bearing. The average Reynolds equation that is modified to include the surface roughness, viscosity variation due to temperature rise in lubricant fluid film and fluid inertia is used to obtain pressure field in the fluid film. To render into account the influence of fluid inertia the averaged fluid film thickness and inertia term are used. The authors conclude that the circumferential fluid-film pressure and load carrying capacity of the bearing increases due to fluid-film inertia. The increase in their values is more significant when thermal effect is considered.

The investigations presented in [25] by Hageman et al. show the impact of fluid convective inertia forces at the leading edge of tilting-pad journal bearings. Concordantly, measurement data and CFD analyses indicate that the pressure characteristic is significantly influenced by this phenomenon, especially at elevated rotor speeds.

On the base of the above mentioned publications and their discussions can be generalized the following conclusions about the influence of fluid inertia in the lubrication of tribological systems: The effect of fluid inertia becomes noticeable at values of the modified Reynolds number equal or greater than 1; The dynamic characteristics of the bearing are sensitive to inertia effects; The contribution of inertia terms to the hydrodynamic pressure values does not exceed 10-30% of the inertia-less pressure values; In infinitely short bearings the inertia influences in reducing the initial velocity as this effect is weak at small eccentricities and it is high for the bigger eccentricities, respectively; The effect of the lubricant inertia in the bearings operating in turbulent mode is such that the load carrying capacity of the lubricant film increases.

One of the most important trends in the contemporary development of hydrodynamic theory Oflubrication is the obtaining numerous new, complex solutions, taking into account the different effects of the theory directions. In that means, the influence of fluid inertia can be evaluated in combinations with the effects of urbulence, thermal and elastic deformations, surface roughness, non-Newtonian lubricants, etc. Various similar solutions are already carried out as an increase in their diversity and complexity is expected.