Experimental study on the rheology of mineral oils with additives

Viscosity index improvers reduce the lubricant’s tendency to change viscosity with changing temperature. Various kinds of lubricating oils blended with this type of additives exhibit typical nonNewtonian properties. In the current paper it was studied experimentally the effect of these additives on the rheological Cliaracteristics of mineral oils. The tested oil is AN46 /viscosity grade ISO VG 46/ type with the additive Polybuten 30 (PIB30). At the experiment a rotational viscometer type cone-plate for measurements at a medium to high shear rate is used. The results showed that the studied samples of mineral oil with different concentration of the polymeric thickening additive have a typical behavior of pseudoplastic fluid. With an increase of the shear rate a decrease in viscosity and an increase in shear stress are observed. The effect of increasing the concentration of the additive is expressed by an increase in shear stress and viscosity. The tested lubricants have typical thixotropic properties.

Reducing wear of machine details and minimizing friction losses results in increased reliability and durability of tribological units. In this regard, the proper lubrication of machines and mechanisms is necessary for their normal operation. In addition to complying with the operating mode and operating parameters, as well as the selection of appropriate materials for the contact surfaces, essential to reduce friction and wear is the choice of suitable lubricant for the particular application. On the other hand, the improvement of machines (significantly higher velocities and pressures, loads, etc.) requires improving the properties Oflubricants and their correct selection, [1].

It is known that additives of different types are added to improve the properties of lubricants in almost all types of oils. For example, for obtaining oils having good viscosity-temperature properties, the base oils are blended with a small amount of viscosity index improver, e.g. polyisobutylene [2, 3]. In the case of mineral oils into which such viscosity index improvers (polymers having long chains and high molecular weight) are added, the resulting lubricating fluids exhibit non-Newtonian properties. The subject of the investigation presented below is a fluid of a similar type, as the purpose of the current study is to analyze the influence of a viscosity index improver in various concentrations on the rheological characteristics of mineral oils.

The experimental study was performed in a specialized rheology laboratory with modern scientific equipment. The obtained results are graphically represented and they illustrate dependences of shear stress and viscosity on the shear rate as well as the relation between the viscosity and the additive concentration.

The results can be used in scientific investigations as input parameters in modeling and simulation of the lubrication process of various types of tribological contacts.

The modem lubricating oils are a complex chemical product - either alone or as a result of the blending of base oils (oil base components) and many organic and inorganic compounds called additives [1, 4, 5, 6]. According to the classifications, the base oils are mineral (produced from petroleum or crude oil), synthetic (obtained through organic synthesis) or biodegradable (of plant or animal origin), as others include also semi-synthetic oils (petroleum based and synthetic additive). Additives regularly are included in the base oil composition to improve the efficiency of the oils and modify their properties [1, 4, 7, 8]. The number and quantity of the additives in the total volume of the oil may vary greatly.

As it is well known, the oil viscosity (measure of the fluid internal friction) is a key factor for the quality and efficiency of the lubricant. It influences significantly the

Experimental study on the rheology of mineral oils
with additives

performance of the lubricated contacts in the tribological units and it is directly related to temperature, pressure, shear rate and other mode parameters.

Viscosity index improvers are added to reduce the sensitivity of the oil viscosity to temperature changes. The viscosity index (VI) is a non-dimensional value determined by an established scale and characterizing the change of oil viscosity depending on temperature. A high value of this index shows a slight change in viscosity when changing the temperature, while the low value of VI - the opposite tendency [9, 10].

The presence of such kind of additives (VI improvers) in lubricating mineral oils leads to non-Newtonian behavior of the latter. It is therefore of particular interest to study the rheological characteristics of such lubricating fluids.

As is known from the specialized literature [9, 10, 11, 12], the non-Newtonian lubricants could be classified as plastic, pseudoplastic and dilatant ones. Their viscosity is sometimes defined as apparent or initial, as in the lubrication process its values can be changed.

Plastic fluids under static conditions behave as solids, but under certain conditions they begin to flow (characterized by a “yield stress” over which they may display Newtonian, dilatant or pseudoplastic fluid characteristics). A typical lubricant representative is Bingham plastic mass. Pseudoplastic fluids are characterized by a reduction in viscosity 7 with an increasing shear rate у. This type of flow behaviour is sometimes called “shear-thinning”. Dilatant fluids (also referred to as “shearthickening” flow behavior) have an increasing viscosity 7 with an increase in shear rate /. The basic rheological characteristics, i.e. dependencies of viscosity 7 and shear stress T on the shear rate / for pseudoplastic and dilatant fluids are given respectively in Figure 1 and Figure 2.

Similar to all types of non-Newtonian fluids, the three types listed above are presented by various rheological models such as the Bingham model for plastic fluids, the power-law model and the cubic stress model for pseudoplastic and dilatant lubricants.

Another important rheological characteristic is the effect of time on the viscosity values. Depending on this influence, two types of behaviour of non-Newtonian fluids are defined: thixotropy (the viscosity decreases with time, while it is subjected to a constant shear rate) and the opposite case - rheopexy (the fluid’s viscosity increases with time as it is sheared at a constant rate). Both thixotropy and rheopexy may occur in combination with any of the previously discussed flow behaviours of non-Newtonian fluids.

The rheological characteristics of lubricants regularly are investigated on the basis of their viscosity measurement, which is the fastest, most accurate and reproducible method of analysis [10, 13].

Subject of the present experimental study are lubricating fluids of mineral oil with viscosity index additive. The selection of specific oil and respective additive is made on the basis of a survey and comparative analysis of the properties and behavior of such a type of lubricants for journal bearings, which are a subject of research in the experimental work [14] of the Japanese scientists Wada & Hayashi.

For the experiment is used the oil AN46 /viscosity grade ISO VG 46/ which is general purpose industrial oil. As viscosity index improver in our case is used the additive Polybuten 30 (PIB30).

As it was already mentioned, the modifying additive to the oil gives it nonNewtonian properties, because of which the experiments are implemented on the appropriate for such kind of lubricants rotational viscometer Brookfield series „CAP 2000+” [15]. The viscometer type is cone-plate, Figure 3.

In this type of apparatus, the cone angle provides a constant shear rate of the fluid, which is positioned between both elements of the device - the moving element (rotary cone) and the fixed one (stationary plate). The range of measured viscosity depends on the angular velocity and the shape and size of the cone used.

The obtained results refer to the tested on the Brookfield rotational viscometer series of oil samples with several different additive concentrations - between 0.3 % and 5 %. (Note: Hereinafter, the percentage ratios for concentrations are in percentages by weight, i.e. w. %).

Experimental results are presented graphically and they illustrate: classical relationships /т-ү, г/-ү/-, effect of the shear rate; influence of the additive concentration.

Experimental study on the rheology of mineral oils with additives

Figure 4 and 5 show rheograms which represent classical relationships in the study of non-Newtonian fluids.

In Fig. 4 are given rheograms for the relation between shear stress and shear rate. They refer to three lubricant samples with different concentrations (resp. 0.3%, 2%, 4%) at low range of the shear rate (from 200 to 2 000 s'1). The results show that the т values increase with increasing concentration. This effect is most apparent at high values of the shear stress.

The results in Figure 5 refer to samples with concentrations 0%, 2%, 5% at the large range of shear rate (from 1 333 to 13 333 s'1 ). It was observed a reduction of the viscosity with increasing y. The latter corresponds to the behavior of pseudoplastic fluids.

The graphs on the above mentioned two figures show a coincidence with the theoretical formulations for this type of fluid. 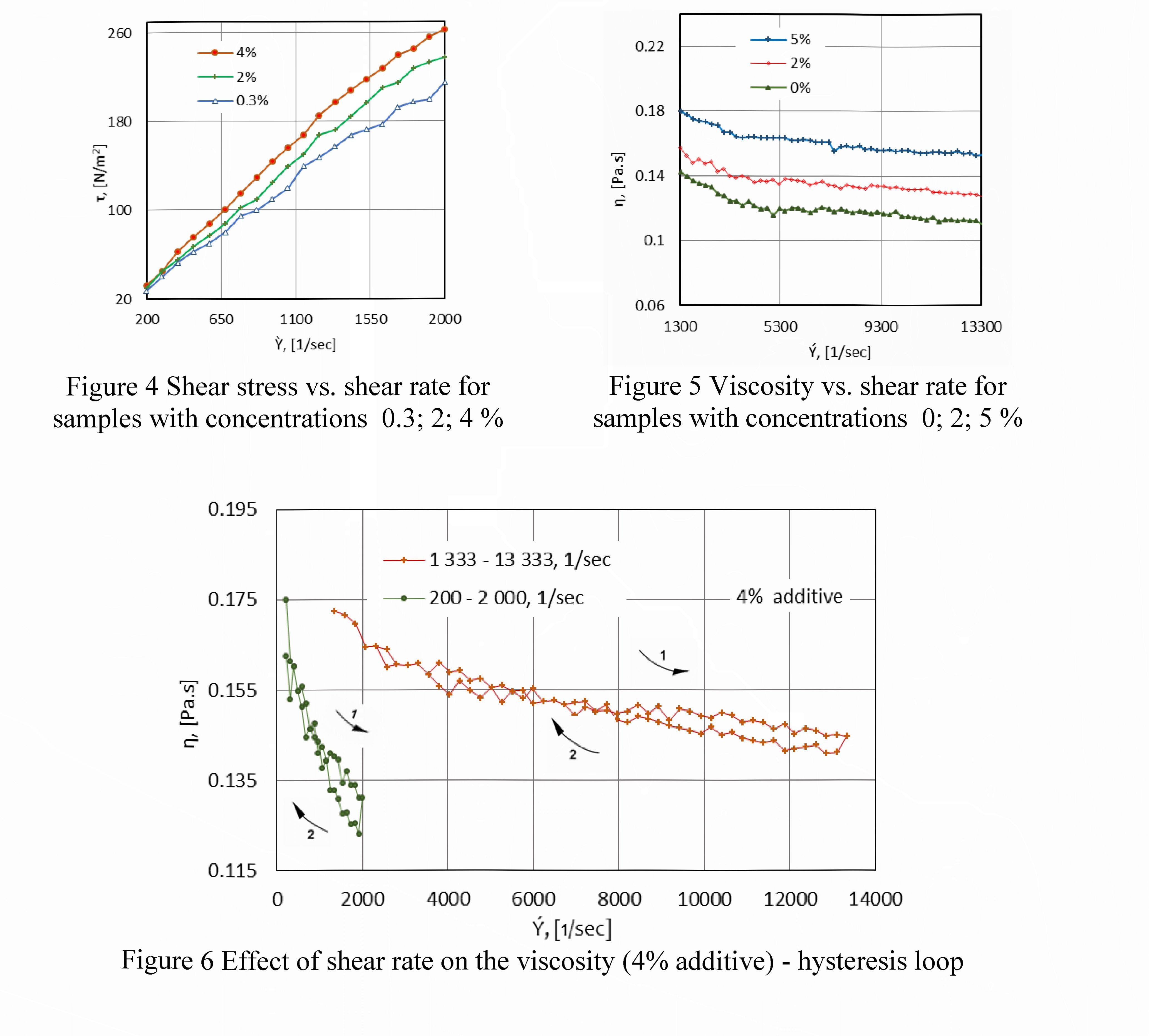 Tn fig. 6 and fig. 7 is presented the effect of / on 7 for both ranges of the shear rate for a 4% sample and for a 3% sample, respectively. The experiment is conducted by the “up-down rate ramp”, as the fluid is loaded to maximum shear rate and unloaded to the initial one [12, 13]. In this case, non-matching curves (hysteresis loop) is observed due to the prolonged time of shearing. The reduction in viscosity with increasing shear rate (pseudoplastic behavior) can be explained by a temporary change in the orientation of macromolecules of the additive in the oil. The molecule formations are orientated almost parallel to the surface of the rotating element, whereby its rotation is facilitated and the viscosity decreases accordingly [12]. With a reduction in the shear rate, the inverse process is observed - an increase in viscosity. The lack of coincidence between the two curves at increasing and subsequently decreasing the shear rate (presence of hysteresis loop) is due to the time influence as for our case of lubricating fluid are observed typical thixotropic properties.

Figure 8 shows the dependence of viscosity 7 on the concentration of the viscosity index improver to the oil.

Experimental study on the rheology of mineral oils
with additives

analogical tendency about the influence of the vi additive concentration on the values of the lubricant viscosity is established experimentally also by the wada & hayashi at the study of pseudoplastic fluids [14].

This paper presents the results from an experimental study of the influence of viscosity-index additive Polybuten PIB30 to mineral oil AN46 on the rheological behavior of the resulting lubricating fluid with non-Newtonian properties.

The graphically presented results illustrate the relationships between shear stress and shear rate also between viscosity and shear rate. Furthermore, the effect of variation in the shear rate and influence of the additive concentration are studied.

The tested samples of mineral oil with different concentration of the polymeric thickening additive have a typical behavior of pseudoplastic fluids (with an increase of the shear rate a decrease in viscosity and an increase in shear stress is observed). The effect of increasing the concentration of the additive involved is expressed in an increase in shear stress and viscosity increase. The lubricants tested have typical thixotropic properties, i.e. their viscosity increases with time as it is sheared at a constant rate.

The authors gratefully thank for the support of this work, provided by CEEPUS Program under the project CIII-BG-0703-05-1617 “Modem Trends in Education and Research on Mechanical Systems - Bridging Reliability, Quality and Tribology”.