Abstract. The article examines the size of the government bonds. The interrelation between this process and the dynamics of treasuries yield is revealed and its implications for the US budget process are considered.

The US government debt currently serves as the basis of the world reserve system - according to the IMF, 62.5% of the world's total reserves are stored in various types of US government obligations produced by the Federal Treasury [1]. On the other hand, foreign investors are also very important for the American publicfinance system, since they own (as of July 2018) government obligations totalling $ 6,251 billion [2]. This represents almost 30% of total US federal debt ($ 21.2 trillion in the second quarter of 2018); and 41% of that amounts to $ 15.5 trillion [3], which accounts for investors (also a certain part of the US government debt belongs to government departments). Thus, the US national debt performs a very important function for the global financial system, acting as a core element of its reserve assets; but, at the same time, results in government finances depending highly on foreign holders of treasuries.

Under normal conditions, the balance of the mutual economic interests of both the issuer of debt obligations and their holders ensures the stability of the market, in spite of the enormous size of the US debt, and the stability of the federal budget process - both things that are largely dependent on debt financing. The federal budget for the 2018 fiscal year assumes a deficit of $ 832 billion, with a total expenditure of $ 4,173 billion [4] - that is, almost 20% of its expenses are covered by borrowing, which is largely provided by foreign investors. However, in the current conditions of a sharp increase in geo-economic tensions caused by the aggressive actions of President Trump’s administration, the fragile balance in the US debt market may falter and lead to far-reaching consequences not only for this market, but also for the American and even the global financial system.

The imbalance and hypothetical collapse of the debt pyramid over the course of a number of years has been considered one of the likely scenarios for ending the build-up of hypertrophied government debt in the United States and many other developed countries. Moreover, such assessments have recently shifted from the sphere of populist discussions to academic discourse and are being voiced by experts in the financial market, including in the United States. This problem is associated not so much with the build-up of the federal government debt itself, but with a significant increase in federal budget expenditure (i.e. to do with the management of this area) which has accelerated significantly over the past three years not just in absolute terms but also relative to total budget expenditure (Fig. 1).

The size of budget expenditure on debt management directly depends on the current interest rates on treasury bills, which have been increasing from the end of the quantitative easing program of the FRS and the beginning of the rateincrease cycle. This growth largely determined the increase in budgetary expenditure for government debt management in the federal budget, the net volume of which increased sharply in the 2018 fiscal year, both in absolute and relative terms.

In the context of growth in rates on treasuries, budget expenditure on interest payments, as well as the very federal debt of the United States, the stability of the market for the US government bonds is becoming of particular relevance. Meanwhile, this stability is undermined by the measures taken by Trump’s administration both in terms of the trade wars he has launched with the USA’s main trading partners (first of all, the PRC); and in terms of the expansion of politically motivated sanctions, primarily against Russia, as well as Iran and other countries. Both trade wars and sanctions may lead to actions on the part of the affected countries with respect to the US debt which could unbalance its market. A massive 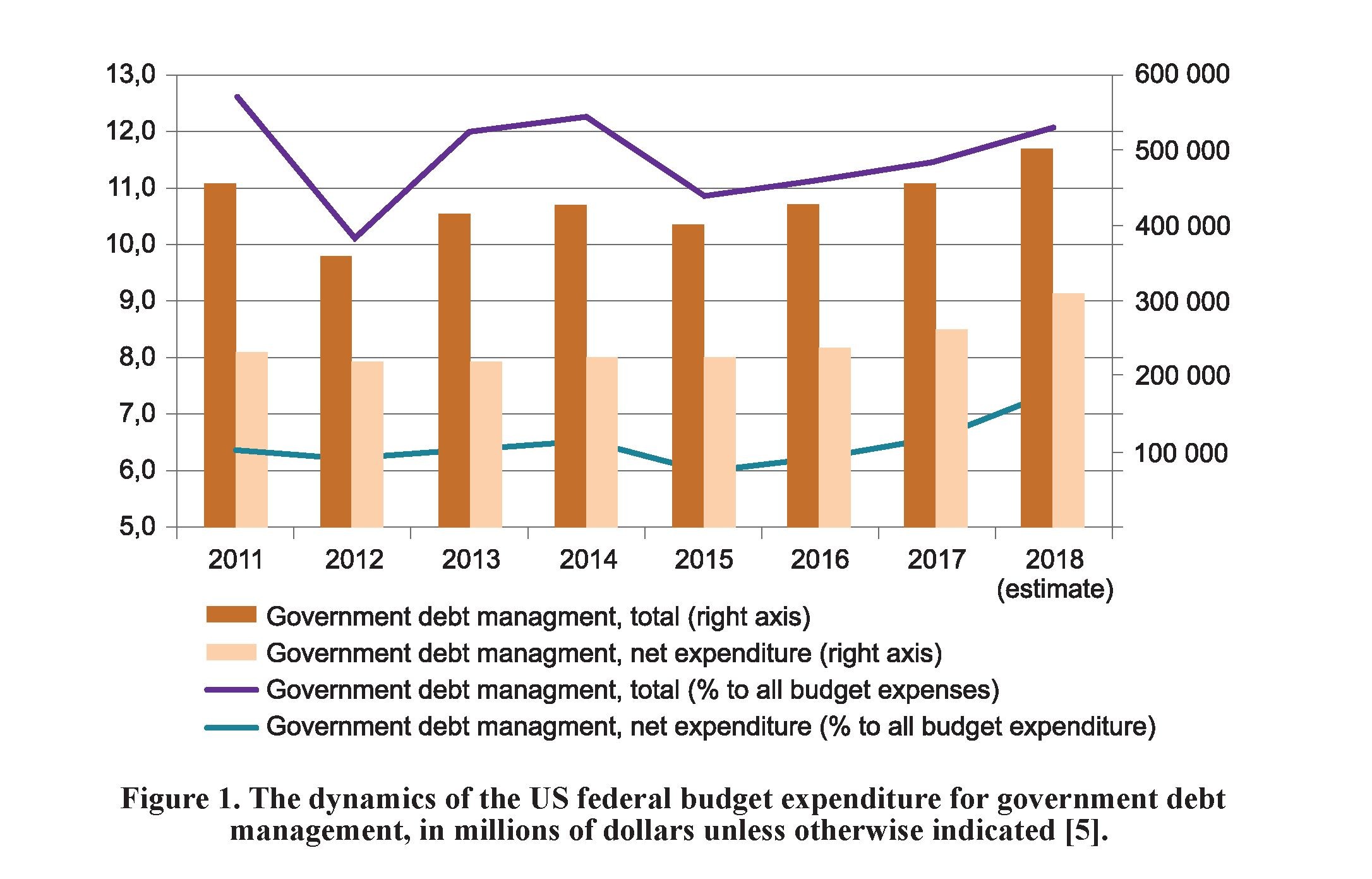 dumping of bonds by any large holder (in response to trade protectionism or in response to sanctions) can, at the bare minimum, cause their prices to sink and the yield to grow, leading to an increase in budget expenditure on the government debt management; and, at the maximum, provoke a market collapse and a very severe global financial crisis.

In this regard, it is of interest to assess the potential of such actions by the example of Russia's withdrawal from treasuries dated April-May of the current year. During this period, the volume of these securities among Russian investors decreased, according to US Treasury data [6], which keeps the relevant statistics, from $ 96 to 14.9 billion, that is, by $ 81.1 billion. Apparently, this reduction occurred primarily at the expense of state assets on the eve of the next set of sanctions, which, in the most radical format, could be extended to Russian state funds placed in the USA. The volume of securities sold by Russian holders can be estimated as quite large, considering that in March, at the beginning of this reduction, the total amount of treasuries held by state foreign holders was $ 4,049 billion - that is, the reduction of Russian

QUARTERLY ANALYTICAL REVIEW 4 (72)/2018investments amounted to 2% of their total. During the period of Russia’s withdrawal from American securities, their other foreign holders as a whole retained and even increased their investments (Tab. 1). It can therefore be concluded that the Russian sell-off of treasuries caused a decrease in the total volume of these instruments from foreign investors, which amounted in March-April to $ 59 billion or 1.5%. Thus, it was Russia’s withdrawal from US government debt during this period that caused a decrease in its volume among foreign holders as a whole.

Table 1. Comparative dynamics of the volume of the US treasuries held by Russia and all foreign holders in 2018 [2].

This reduction coincided with a fall in prices of these instruments and growth in their profitability (Fig. 2). It was in April-May 2018 that the yield on 10-year Treasury bonds exceeded 3% per annum - for the first time since 2014. Considering the above data and taking into account the fact that Russia was the only major seller on the market during this period that was sharply reducing its investments in American financial instruments, it is legitimate to conclude that these events are directly related. It was Russia’s sell-off of US treasuries totaling $81 billion and the reduction in the total volume of these securities held abroad (especially noticeable in April), caused by it, that led to a sharp drop in recent years to record levels in both the price of these instruments and their yield. 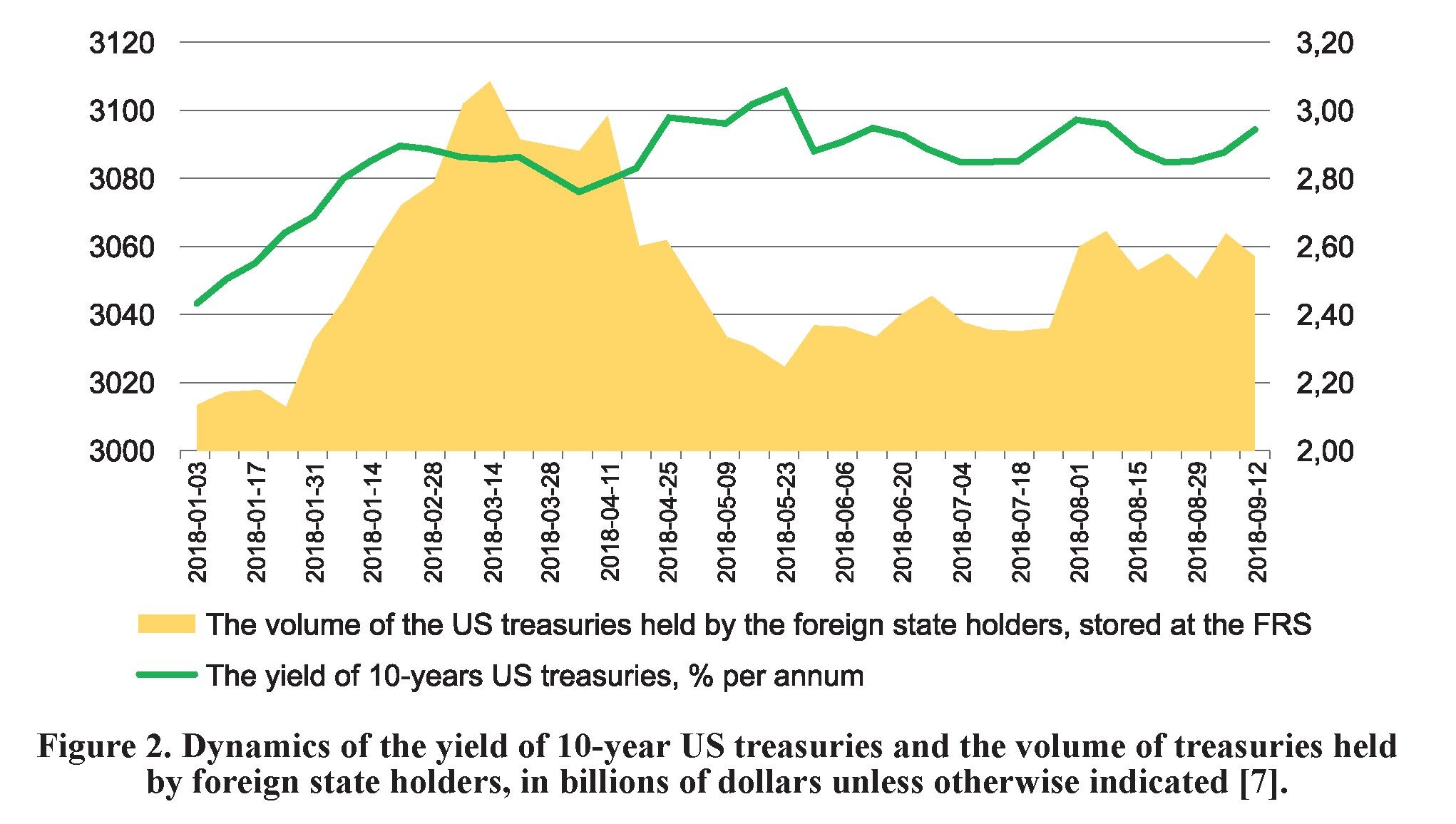 The growth of market profitability determines the growth of profitability of new bond issues, at the expense of which the former debts are refinanced, which causes an increase in budget expenditure on interest payments on them and adversely affects the US budget process. As we know, the federal budget for the 2018 fiscal year provides for a deficit of $ 832 billion. However, over 11 months of this year (from October 2017

to August 2018), the size of the deficit exceeded $ 898 billion; and, to a certain extent, the deficit’s getting beyond the boundaries was associated with increased costs starting in May (Fig. 3), when the Treasury had to issue debt obligations at higher interest rates, which should have corresponded to the current market situation and prices that were under pressure, including Russian sales of similar securities.

Thus, the example of Russia's actions in relation to the US government debt market demonstrates the possibility of significant influence on this market even by relatively small volumes of operations. The sale of securities in the amount of 1.5% of their total volume held by foreign holders, or 0.5% of the total volume of investors, increased the current market yield from 2.82% to 3.06% per annum, or 8%. This led to a deterioration in the conditions of new borrowings and to a certain extent caused the US budget parameters to go beyond the planned

boundaries due to the growth in the government debt management expenditure. This example demonstrates the possibility and potential for negative influence on the US government debt market for similar actions by other countries, which can choose it as a means of response in the unfolding trade wars, which are now moving into the stage of general economic confrontation. Attention is thus drawn to the fact that a new growth of yield above 3% per annum on 10year Treasuries occurred on September 19, after the United States announced a new package of 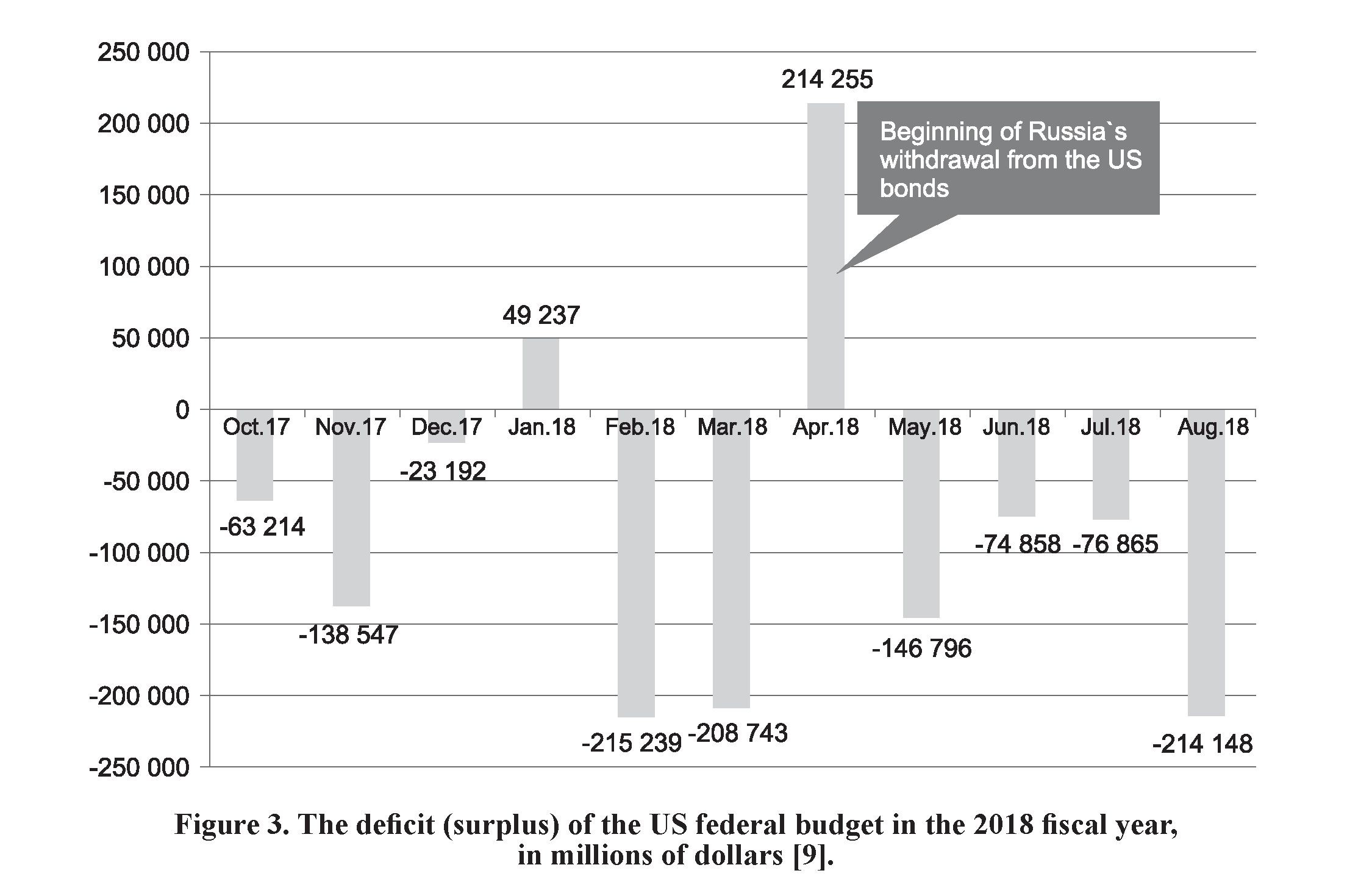 duties, which will be imposed on imports from China and totalling $ 200 billion. This sharp rise in yield, in our opinion, is a sign of China’s response to the withdrawal from American securities and pressure on the United States in part of their public finances. China’s pressure on the US bond market is much higher than Russia’s — China owns (as of July this year) $ 1,171 billion-worth of these tools [2]; and if the opposition between the United States and the People's Republic of China enters a more acute phase, China may bring down the US government debt market, as is indicated by the example of the Russian actions discussed above. The escalating trade wars thus carry very significant negative potential for the global financial system, going far beyond the foreign trade of the two largest economies in the world; and the situation in the US and global debt markets should be carefully monitored as the potential focal point of a new global crisis.