Tax evasion, currency demand and the shadow economy: the case of Kazakhstan

It is a well established fact that informal activities are on the rise around the world, particularly in developing countries. The estimates made by Schneider and Enste [1] for

IMF reports say that the size of the shadow economy in developing countries ranges from 35 to 44 percent of GDP whereas the same for transition and OECD countries ranges from 21 to 30 percent and 14 to 16 percent respectively. There are several reasons, in turn, why policy makers should be concerned about the rise of the hidden economy: (1) informal activities reduce the tax base, thereby limiting the financing of public goods and social protection [2]; (2) a growing hidden economy may distort official indicators, resulting in inefficient allocation of public resources [3]; and (3) a prospering hidden economy may attract workers away from the formal sector and create an unfair competition environment for formal firms [3].

The literature indicates that a growth in of the underground economy leads to reduced state revenues which in turn reduce the quality and quantity of publicly provided goods and services. Ultimately, this can lead to an increase in the tax rates for firms and individuals in the official sector, quite often combined with a deterioration in the quality of public goods (such as the public infrastructure) and of the administration, with the consequence of even stronger incentives to participate in the shadow economy. Johnson et al. [4] present a simple model of this relationship. Their findings show that smaller underground economies appear in countries with higher tax revenues, if achieved by lower tax rates, fewer laws and regulations and less bribery facing enterprises. Countries with a better rule of law, which is financed by tax revenues, also have smaller underground economies. Transition countries have higher levels of regulation leading to a significantly higher incidence of bribery, higher effective taxes on official activities and a large discretionary framework of regulations, and consequently to a higher shadow economy.

Most of the studies on the underground economy are limited in the main to developed countries and only a few, such as Osoro [5], Schneider [6], Faal [7] are devoted to the developing world. The empirical evidence of Kazakhstan,s shadow economy has been studied only by Schneider [8], but empirical estimates of the shadow economy,s relationship with tax evasion do not exist. This study, therefore, is the first to empirically apply a currency demand model to estimate the relationship of shadow economy size with tax evasion in Kazakhstan.

A method that has been widely used among the indirect approaches is the currency demand approach . This method associates the excessive use of cash in the economy with a greater number of informal activities, and was first proposed by Cagan [9] in his study about the determinants of the stock of money in the United States. Later, Gutmann [10] and Tanzi [11] further developed this approach, assuming that the informal economy is a response to the tax burden and is generally channeled through cash. A correctly defined currency demand function should include, then, fiscal variables as proxies of the tax burden, whose parameters capture the sensitivity of the use of currency to changes in these variables. This allows us to distinguish the fraction of currency demanded for formal and informal activities and to convert the latter into income from informal activities using an appropriate measure of income

In the currency demand approach, the term informal sector or hidden economy refers, then, to all activity that adds value but is not taxed or registered, and consequently is beyond official channels of measurement. This definition follows the widely accepted legal approach to informality. More specifically, economic agents rationally choose to partially or completely engage in informal activities by weighting the costs and benefits that a legal status entails. Formal or informal are then the different activities carried out by individuals, so an economic agent may comply with all the government-imposed taxes and regulations in one market but may not in another * . The currency demand approach, however, has also been subject to several criticisms [17; 18]. As pointed out by Gadea and Serrano- Sanz [16], most of the criticisms are related to the sensitivity of the results to the basic assumptions of the model. For example, the assumption that most of the hidden transactions are in cash. Similarly, the monetary aggregate used in the estimation process and the corresponding velocity of circulation, as well as the assumption of a similar velocity of circulation in both formal and informal activities. Finally, the identification of an appropriate fiscal vawhere that iws hthe er eo bservise dth preferences leading inform ale a ctii nvfiotirems al activit also be difficult. From equatiFornom(3)e,q wuaetiaorne

In the literature econo mies,a ethcoe nfo mrmieasl, athned to measure the sizethe m inimumth e v amluineism, uwme av r economy over timextra curren ecxytrian caunrrencocyn o Kazakhstan, we ap info rmal trainnsfaocrtmio anls t.r ansa method. The pioneers in application of this method were Cagan [9] for the case of the United States followed by Gutmann [10] and Feige [19]. Tanzi [20] further developed this approach by assuming that the tax burden is one of the core causes of the shadow economy which is then channeled through the excessive demand and use of cash. The main assumption is that informal transactions conducted in the shadow economy are mainly in cash in order to avoid any trace of evidence for the official authorities. Any excess demand of cash is then attributed to the variables controlling the shadow economy. In that sense, an increase in informal activities in an economy would lead to an excessive use of cash. Therefore, if we can estimate the amount of excessive cash used in informal activities, then we can estimate the size of the shadow economy by multiplying the amount of cash used in the shadow economy by the income velocity of money.

The data used for the analysis is annual and covers the period from 2002 to 2015, with the aim of having a sufficiently broad sample period whic hisp usual iun der ithiss a pproa ch.er this approga

Taking logs to both sides of (1), the estimated eq ua tion of thetdemand fortcurren cy ise given by,

governm ent inte rvention increases,iin dividuals are encouraged (or have greater incentives) to engage in informal activities which are facilitated with the suse sof currency. s nega ve. that as the level of taxation or government interven ve gTheestudynthen) proceeded toncalculatetithe level of tax evasion. In other words, the amount of tax revenue lost as a result of the shadow economy. uGiv ene avera ge ttax e(T),o ta xnr even ue lost was sderived e as the product of the avera ge) tax an dv theg un der ground GDP. round GDP.

variable (T) to the minimum values, we are
able to obtain M_0^1. The difference between
M_0 and M_0^1 gives us the extra currency
ina nueconomy , ei.e .ethe, illegal fmon eyrused in
the shadow economy
transactions.stimate
anIn s theo case nof the
as sum edle thatbasn the
.

15, with tStandard errors in parentheses

The results showed that the model met they req uirem ents. Expected signs for the variables of the model are as required and all variables are statistically significant apart from taxes. In the model, after estimating the parameters of the above equation, currency in circulation is estimated by using relevant variable s. T hen, .currency in circulation is estima ted eagaine by imposing zero tax rate value. The difference between these two estimates represents the volume of currency ina circulationtinthe underground economy. Multiply ing thise difference with the velocity of money yieldsS the nominal aggregate of theunde rgroundeconomy. 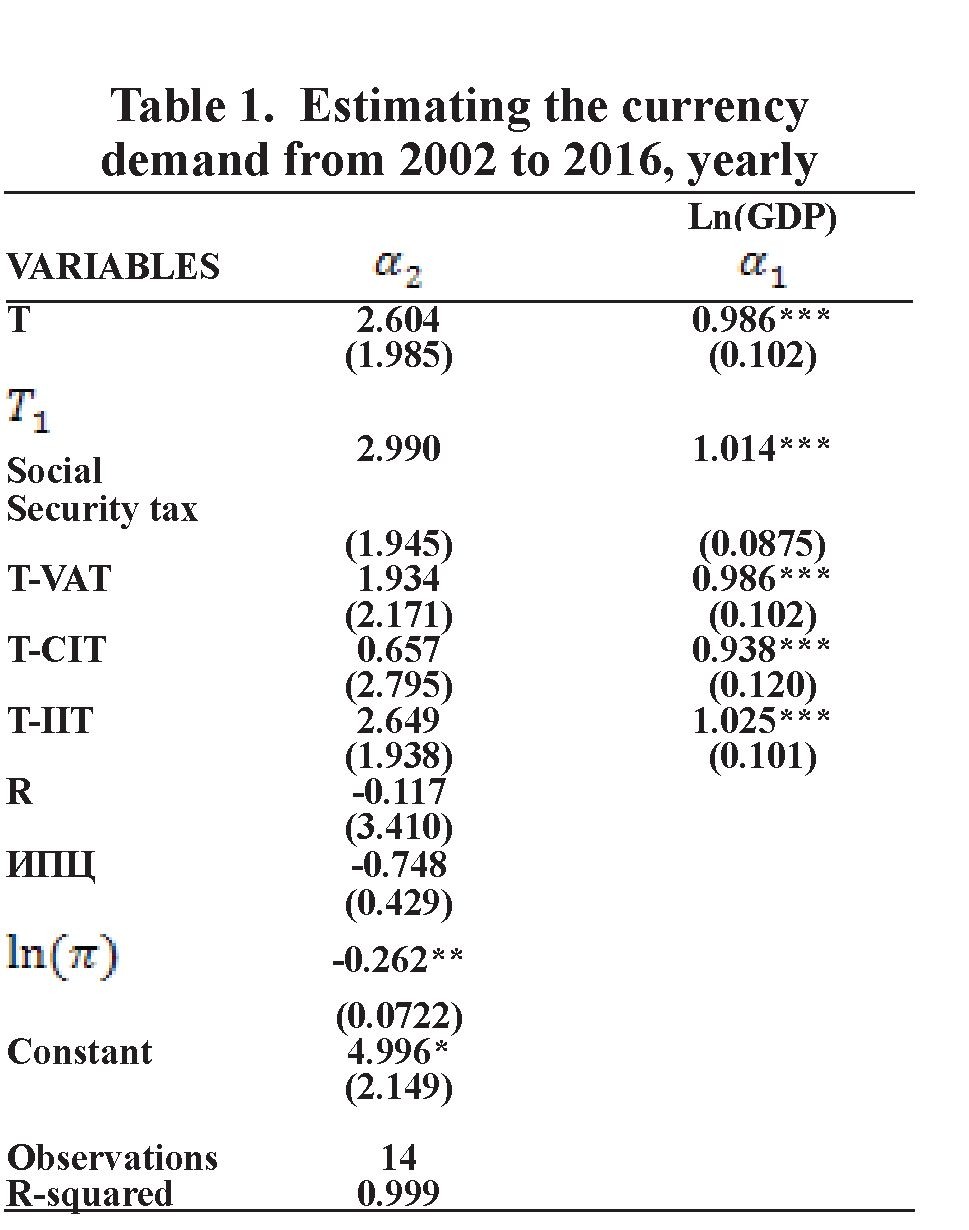 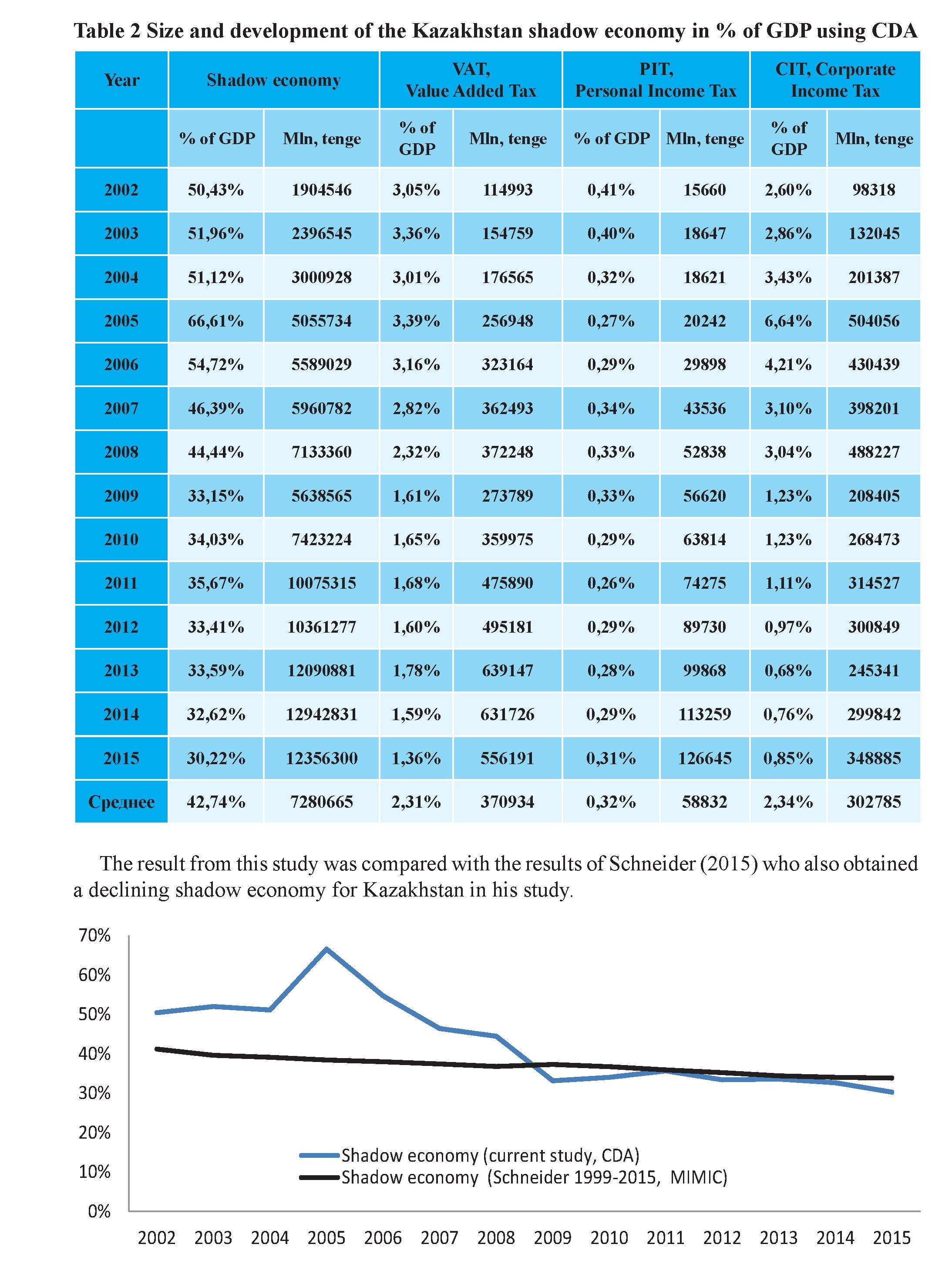 Figure 1 A comparison of the size and development of the Kazakhstan shadow economy using the CDA and MIMIC model, 2002 to 2015

The estimation of the shadow economy by the use of the Currency Demand Approach as CARRIET out in this study oversimplifies the real economy. As pointed out by Schneider and Enste [1; 21] there are many substantial drawbacks to this approach. These include the assumption that there is an absence of any transactions in the underground economy in a given base year, that the velocity of money in both the official and the irregular economy are the same and that the excessive tax burden is the only determinant of the shadow economy. Several other variables determine the level of shadow economy which include the following: the level of GDP per capita, the level of unemployment, the level of business regulation, the level of corruption, the size of government and the quality level of public services. This study, however, sought to emphasize the impact of taxes, hence the high level of emphasis on the role of average taxes. The results obtained do not vary greatly from those obtained from major studies by Schneider [6;9]. The estimates however obtained are slightly higher, at about 30.22 % on average for the shadow economy, with Schneider estimating a value of about 33.8% for the year 2015. About 2.5 % of state revenue is lost as a result of the presence of the shadow economy.