Research on interaction between local community & ecotourism in gilgit-baltistan, pakistan

Ecotourism plays a key role in the economy of the developing world by improving the economic conditions of the local communities and generating income for their livelihood. Ecotourism aims to create viable and sustainable tourism opportunities, while improving the lives of the local people living in the area. Gilgit Baltistan (GB) lies in the north of Pakistan. Gilgit-Baltistan (formerly Northern Areas) is an administrative unit with three divisions and 10 districts located in the extreme north of Pakistan. It has a total area of 72,971 km2 and covers a forest area of 1,582 km2 extended within the high mountain ranges of the Himalayas, Hindu Kush, Karakorum and Pamir (ISMAIL ET AL., 2018). It provides tourism opportunities for domestic and foreigner tourists. GB is famous for adventure tourism because of its high mountain peaks like K2 (8611 m) and some of the longest glaciers in the world.

The present paper was designed to analyze the potential for eco-tourism and the problems faced by the ecotourism in Gilgit-Baltistan, Pakistan.

Here are general Objectives of the paper below:

There are 204 valid survey instruments in this paper. Respondents’ demographic data are utilized as the independent variables. These variables are gender, age, sex, education, employment, place of living and duration of living at the villages. The demographic characteristics of these participants are presented in Table 1 through descriptive analysis (i.e., frequencies and percentages). 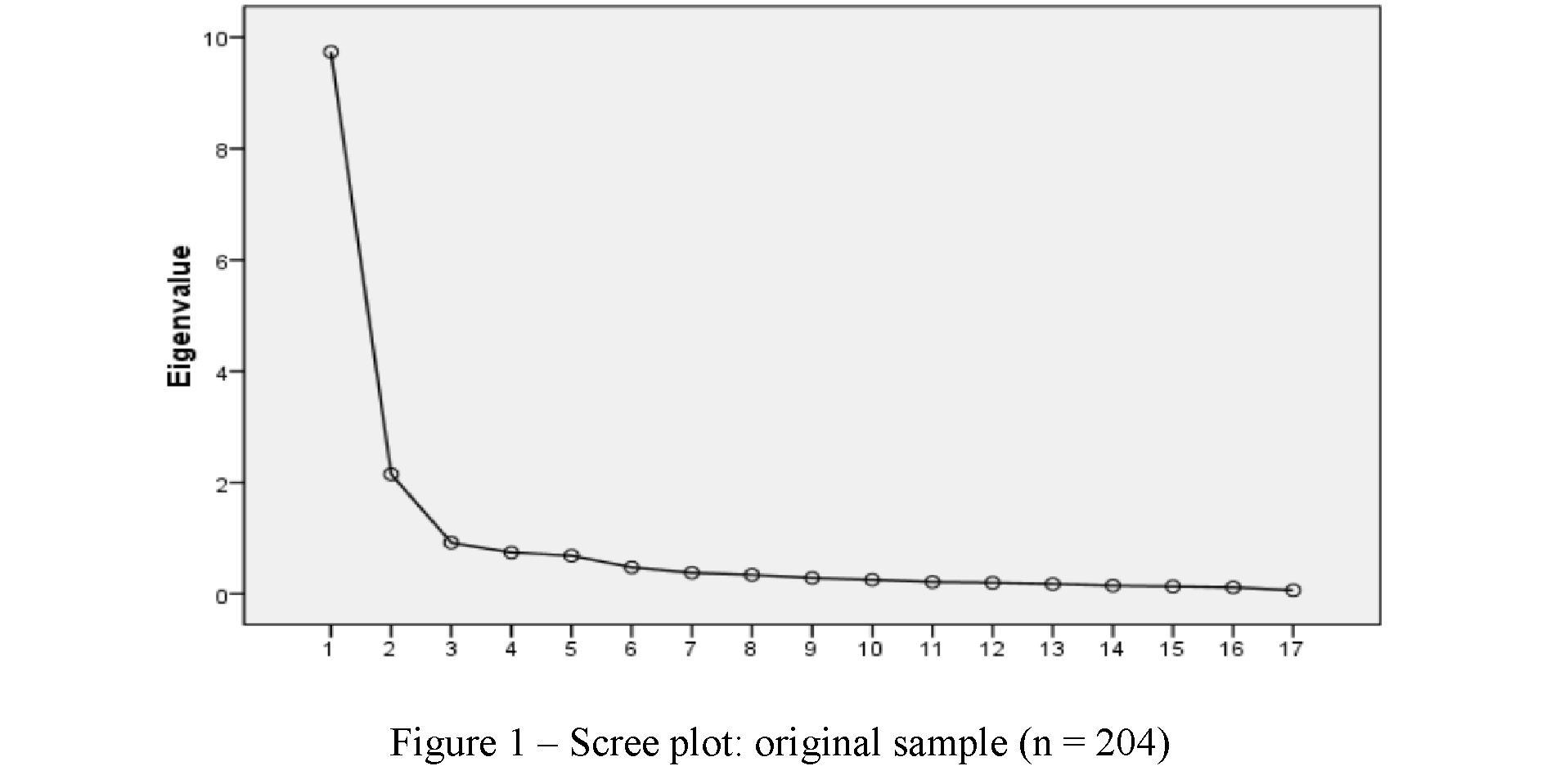 We performed a principle component factor analysis with a varimax rotation procedure on the original sample items to identify the number of factors and their relative loadings (Appendix).

Initially, the number of factors extracted in the original sample was 6, which was determined by the number of eigenvalues greater than 1 and an examination of the scree plot (see Figure 1).

Socio-cultural factor, in terms of inability of host-communities to take advantage of ecotourism-induced entrepreneurial opportunities, socio-political exclusion of women, fear of erosion of culture, and low level of awareness of potential benefits of ecotourism, were also found to impede the development of ecotourism in the study area.

In order to investigate whether there is a significant difference between respondents’ socioeconomic factor and socio-cultural factor and their age, we conducted a t-test (Appendix).

Result of the analysis of socio-economic factor and socio-cultural factor revealed significant difference of respondents of different duration of stay in Gilgit-Baltistan, Pakistan (p>0,05).

It means older people worry more than Youngers about Gilgit-Baltistan, Pakistan in socioeconomic and socio-cultural ways.

In order to investigate whether there is a significant difference between respondents’ socioeconomic factor and socio-cultural factor and their gender, we conducted a t-test.

The reason of this difference is that Pakistan is Muslim country and mostly men work and support their families. That’s why socio-economic factor is very important for them.

In order to investigate whether there is a significant difference between respondents’ socioeconomic factor and socio-cultural factor and their duration of stay, we conducted a t-test (Appendix).

Because only 23,4% residents who stayed 20 years and more in Gilgit-Baltistan showed original ancestry in the area. The rest of the categories for the length of stay are results of influx of people. The reasons for the movement of the people to the area are work-, family, and opportunity-related. When properly designed, implemented, and managed, ecotourism can help balance biodiversity conservation and community needs, enabling sustainable utilization of the community resource base, and can empower local communities by improving their sense of ownership over the use of natural resources.

It is generally believed that ecotourism is not well developed in Gilgit-Baltistan, even though there is high potential and existing tour operators do not offer such touristic packages or services. The survey indicated there is awareness of ecotourism’s benefits among local tourism stakeholders, but rather low awareness and support from the state authorities.

Using factor analysis we generated 12 motive questions into 1 general dimension. As we see in Table 4 most of respondents (KMO=0,92). The survey results reveal that stakeholders also see ecotourism as a means to achieve social and environmental goals, including generating funds to support environmental conservation and promote environmental awareness. These expectations align with the experience of other communities seeking to develop ecotourism. The respondents also demonstrate an understanding of the key attributes required to deliver ecotourism experiences. In particular, respondents recognized the needs of incorporating environmental conservation and education in their tourism experiences. Effective development of the tourism sector is impossible without state regulation, coordination, and control by the structures responsible for its development. The government should be a key reformer in developing tourism infrastructure, as well as developing and implementing tourism policy. Without the foundations of infrastructure development and other policy frameworks, the private sector does not consider the industry worthy of investment. Lack of infrastructure (i.e., transportation) is the problematic aspect of and barrier against ecotourism development. Providing high-quality infrastructure, which requires long-term strategic actions by the government, is an important enabler of tourism development, including ecotourism. These findings suggest that an important factor in ecotourism development in the region will be the development of transport and road infrastructure. The findings also suggest that a need exists for increased training and capacity building in ecotourism, and for financing and microfinancing to support the development of new ecotourism businesses. Specifically, stakeholders noted that ecotourism development is constrained by the inability of entrepreneurs and small tourism businesses to access capital to meet the needs of the ecotourism market. One solution to this is providing tourism business development support to local tourism stakeholders, and access to finance at affordable low-interest rates. These are indispensable resources for local tourism sector stakeholders wishing to increase their supply of the relevant ecotourism services, such as opening a guest house or guiding and offering camel trips (see Tables 3-4).

Knowledge and educational background played important role in identifying the level of awareness among the community on the importance of taking care of different nature resources. Using factor analysis we generated first 5 questions into only 1 general dimension. As we see in Table 6 most of respondents very satisfied with ecotourism in Gilgit-Baltistan (KMO=0,864). There is general understanding and knowledge about eco-tourism by the stakeholders. A proper understanding is essential because ecotourism, if not properly planned and managed can do more harm than conventional tourism (see Tables 5-6).

In order to investigate whether there is a significant difference between respondents’ perception of ecotourism and their gender, we conducted a t-test. The conclusion is that women usually do not travel outside the village, and therefore have less exposure to the potentially negative aspects of development and tourism. Old women villagers hope for more tourism development because of their concern for their health and their desire to do lighter work.

Male villagers have become more aware and concerned about the environmental destruction resulting from development activities. Old male villagers tend to not be concerned with high ecotourism development because they believe that they cannot control it through customary laws. Accordingly, men villagers are more inclined than women to think that the local development opportunities such as road construction may bring about negative environmental and social impacts, because a larger number of men have traveled and witnessed examples of damage impacts of development and over- exploitation (p >0,05) (Table 7).

Consideration of gender is particularly important because ecotourism has a greater potential benefit for most men and greater potential burden for most women if there are no arrangements in the distribution of costs and benefits within the community. Any sort of development project relating to this area should be carefully planned and implemented by the decisions of community members of both genders and of all social strata.

Table 7 - The effect of gender on the perception of ecotourism

Local community plays a key role in the development and implementation of ecotourism. Most of respondents answered extremely positively to recommend ecotourism in their area in Gilgit-Baltistan, Pakistan according to scale from 1 to 10 (see Figure 2). Local community should be benefited from employment opportunities, conservation, social services, more jobs, better infrastructure, improving their livelihood by having opportunity for multiple portfolio of income. The direct beneficiaries from ecotourism development seem to be the employees, craft producers, guides and committee members for they will have additional earnings.

It is found that there are more dimensions of ecotourism site success than what tourism literature suggests. This research has provided more insight on what is success besides conserving the natural resources and having financial gains. There are three clusters of indicators 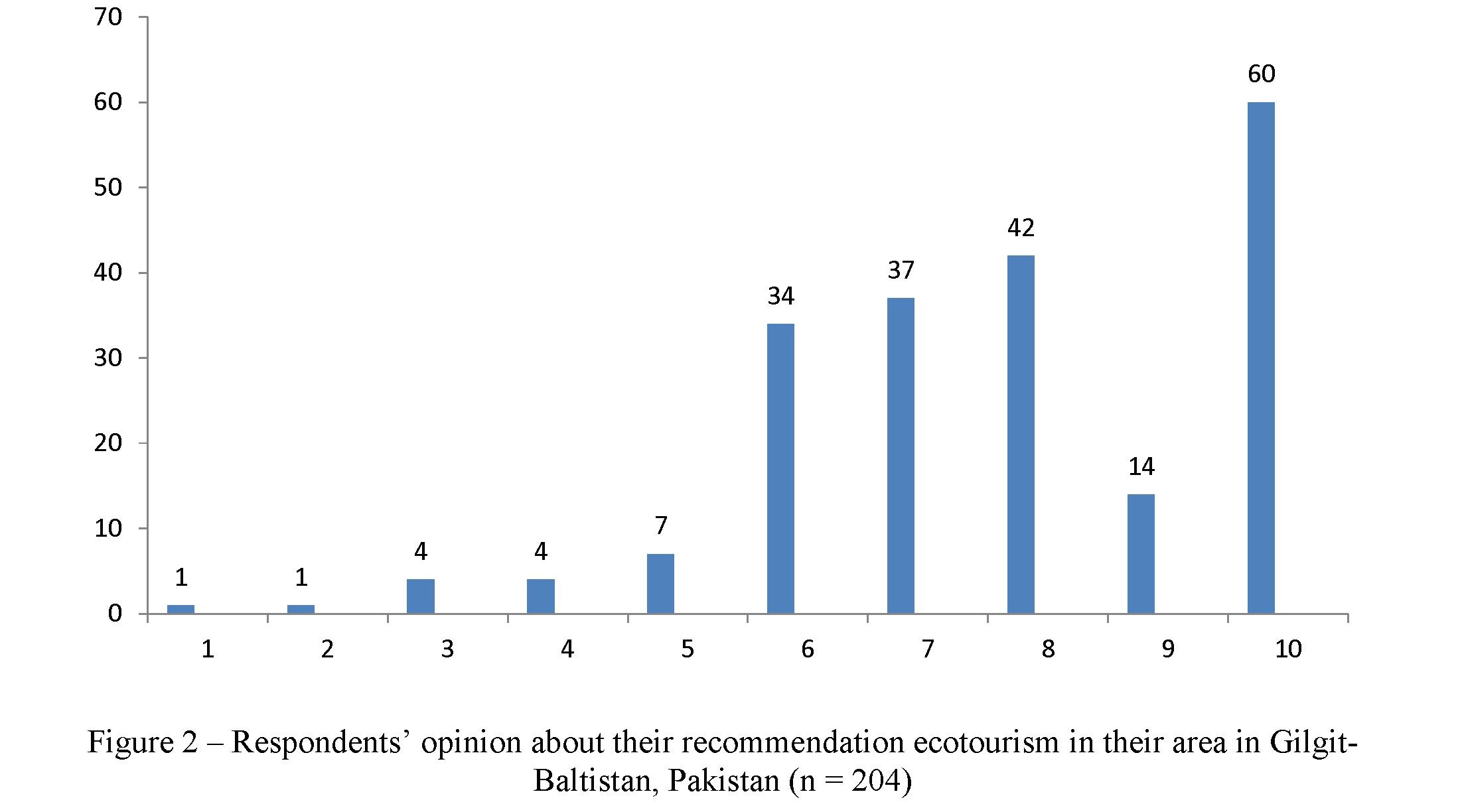