The ability to develop communicative competence in English stays to be an important goal for language learners.

The article suggests strategies for teaching the productive skills, ways to facilitate adequate English language use.

In recent years, much of the discussion relating to proficiency-oriented instruction and testing has focused on the development of oral skills. The emphasis on speaking proficiency can be attributed to a variety of factors, many of which are traceable to the widespread popularity of audiolingual methodologies in the 1960s and the communicative competence movement that began in the 1970s. Yet the legacy of our past is not the only impetus for a continued interest in oral proficiency. Many language students consider speaking ability one of their primary goals of study, either because they would derive some personal satisfaction from being able to speak a second language or because they feel it would be useful in pursuing other interests or career goals. It is clear that oral proficiency in a second language can be an important asset for anyone seeking employment in business and industry in the 1990s and the decades ahead.

As we observed, this emphasis on oral proficiency does not and should not mean that other skill areas ought to be neglected in the language curriculum. However, because the ability to function adequately in speaking continues to be an important goal for many second language learners, it is incumbent upon us as language teachers to identify some effective strategies for teaching oral skills in the classroom that will maximize opportunities for the development of useful levels of proficiency.

Our discussion of strategies for teaching the productive skills, whether orally or in writing, begins with an exploration into the nature of interlan-guage (Selinker 1972) - also called languagelearner language (Corder 1978) - and how it is thought to develop. The language produced by our students differs in important ways from both child and adult native language use. The first section of this article considers several viewpoints of the nature of interlanguage and its development. The second part of the article then presents strategies for teaching oral skills, with sample activities illustrating how students can engage in oral production in meaningful and personalized contexts. In ~ 70 ~

the last section of the article, ways in which both native speakers and teachers tend to respond to language-learner language are explored, and a range of feedback strategies is suggested to facilitate students' progress toward more precise and coherent language use.

The Nature of Inter language

At any given stage of proficiency, the oral and written language competence of non-native speakers, though different from that of native speakers, can be characterized as a coherent system governed by some set of internalized rules. These "rules" should not be confused with the pedagogical rules that one finds in textbooks; many times the learners' rules differ from those that they may have been taught. Often learners are unable to explicitly state the rules by which they are operating. (The same can be said of many native speakers, who know how to use their first language expertly but are unable to explicitly state the rules that govern their language use.)

Seliger (1988) reviews various ways in which non-native rule systems have been described in the literature. Corder (1967) refers to language-learner language as "transitional competence," implying that learner systems are constantly changing. Nemser (1971) refers to the developing grammar as an "approximative system," focusing on the incompleteness of the system as it moves progressively along a kind of continuum between the learner's native language and native competence in the second language. Selinker (1972) characterizes the learner's developing system as "interlanguage," describing it as an intermediate system located somewhere between the learner's native language and the target language, but governed by its own unique and coherent internalized rule system that rarely becomes totally congruent with the system of the second language. Selinker refers to this incongruence between the interlanguage and the target language as "fossilization." He suggests that certain items, rules, or subsystems that are not fully congruent with the target language can become a permanent part of the learner's interlanguage, resistant to further instruction or explanation (Selinker 1974, pp. 118-19).

Corder (1978) and Selinker both think of interlanguage as a continuum, but Corder suggests that there may be various types of continua that can explain how language-learner language develops. If one adopts the continuum suggested by Selinker, for example, one would conceive of the learner progressively adjusting the native language system so that it gradually approximates the system of the target language. Such a view of interlanguage can be called a progressive restructuring, and the continuum implied can be called a restructuring continuum (Corder 1978, p. 75). This type of conceptualization seems to account for the fact that interlanguage, particularly in its earliest developmental stages, frequently manifests various characteristics of the learner's native language. However, not all learners show consistent evidence of transfer from the native language, and certainly not to the same degree across learners. Corder believes that because this is true, and because the interlanguage is typically simpler, overall, than adult native speech in the language being acquired, one could conceptualize a second type of continuum, called a recreational, or developmental continuum. Like child language, the system becomes more complex as the language is acquired. However, the child begins with no knowledge of the language, whereas the adult second language learner begins with cognitive structures already intact, in conjunction with comprehensive knowledge of a first language system (Corder 1978, p. 75).

Corder suggests that both continua might actually work in consort and are not necessarily mutually exclusive. It is possible, for example, that learners might follow a restructuring continuum (i.e., going from the native language to the target language) when acquiring the phonological system, but progress along a developmental continuum (i.e., moving from simple to more complex forms and structures) when learning the syntactic system. A second possibility is that learners in a natural setting follow a developmental continuum, while students in formal classroom settings progress along a restructuring continuum. This point of view is compatible, to some extent, with Krashen's (1982) acquisition/learning distinction. A third possibility is that both restructuring and developmental processes are operating together in language learning, and that there is a great deal of variability in the way the interlanguages of different individuals develop (Corder 1978, p. 79). 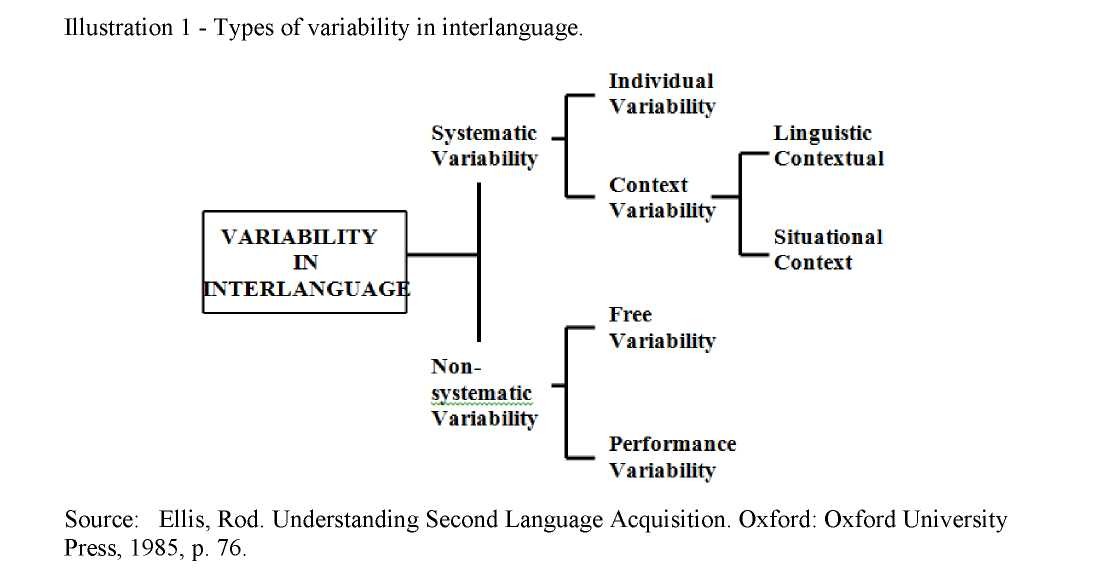 perform most accurately. Indeed, Ellis (1982) found that second language learners in a study he conducted performed most accurately on tasks that were cognitively simple (involving concrete situations in the present time frame) and attributed this to the fact that there was more opportunity for learners to attend to form in such situations (Ellis 1985, p. 89).

Perhaps one of the most interesting hypotheses that Ellis proposes is the idea that "careful style" tasks can have an impact on the development of more accurate usage over time in the "vernacular style." The vernacular style is thought to be the most stable style, since it contains the forms of the interlanguage that the learner has most fully automatized. The careful style, on the other hand, has more interlanguage forms than the vernacular style, since it includes those forms that have not yet become fully automatic and that occur in free variation with more automatic forms. Ellis, following Terone 1983 suggests that new forms that are initially part of learners' careful style could eventually spread to their vernacular style. "Development does not consist of sudden jumps, but of the gradual extension of regularities from formal to progressively informal styles on the one hand, and from simple to increasingly complex linguistic contexts on the other" (p. 94). He adds that, although it might be said that one can communicate effectively with very little grammatical accuracy, learners who would like to conform more completely to sociolinguistic norms of the target culture might benefit from practicing careful style forms in an effort to make accurate usage more automatic. "Whereas vernacular forms are instantaneously available, careful forms are not. However, as the careful forms are used, they are practiced with the result that they become more automatic, require less attention, and so are available for use in interlanguage style nearer the vernacular end of the continuum" (p. 95). As second language proficiency develops, competing forms in the interlanguage that have been used in free variation are sorted out as the learner figures out what forms are used in what contexts. Any forms that are redundant are eventually eliminated. This "mapping" of forms to functions is a slow process involving a constant reorganization of the interlanguage system (pp. 95-96).

One might hypothesize on the basis of these observations that a variety of tasks should be used in the second language classroom, ranging from careful style activities where learners practice using language in planned discourse that is cognitively simple to vernacular style activities, where more complex communicative tasks involving less monitoring are undertaken. A balance of practice with tasks drawn from the whole continuum of styles might lead to more proficient performance in terms of accuracy and fluency.

In the next section, ways to plan oral practice activities so that a balance such as that suggested above might be achieved are described and illustrated. The section begins with a framework for planning instruction that is derived from the oral proficiency descriptions provided by the ACTFL Proficiency Guidelines.

Planning Instruction for the Development of Oral Proficiency

Appropriate teaching strategies are likely to vary, depending on students' current level(s) of proficiency and the level envisioned as an instructional goal. In order to provide optimal speaking practice in a given class, we need to determine, at least in some global fashion, what range of levels is likely to be attainable in the course of instruction. The term range is used here because it is unrealistic to expect that all students in a given course will be at the same level of oral proficiency at the end of instruction. Determining an expected range of proficiency upon completion of a course might best be accomplished experientially through a preliminary assessment of students' oral proficiency at the beginning and end of the course using the interview procedure. After several semesters of testing, an expected range of proficiency should be relatively easy to identify. One can then begin to reorient instruction toward carefully defined goals, derived in part from appropriate level descriptions. Classroom activities can be selected to correspond to current levels of proficiency and to those in the next highest range so that opportunities for progress along the scale can be maximized.

What types of goals are appropriate for students at the Novice, Intermediate, and Advanced levels of speaking proficiency? What kinds of classroom activities are optimal at each of these levels? A variety of curricular plans for instruction in oral skills could be derived from an ~ 73 ~

examination of the ACTFL Proficiency Guidelines. As was pointed out in earlier sections, it is important to bear in mind that the guidelines are not a set of goal statements in and of themselves, but are rather descriptions of typical competencies (as well as patterns of weakness) that language users are expected to have at each of the levels of proficiency. As Heilenman and Kaplan (1990), Higgs (1986), and Galloway (1987) have observed, the guidelines are meant to be evaluative in nature and should not be used directly and verbatim as course objectives.

The proficiency descriptions can be useful, however, in the goal-refinement process when planning curricula. Each group of individuals responsible for designing a local curriculum will need to consider what the guidelines imply for their own situation. Although different curricular plans might be roughly similar, no two groups of classroom teachers or curriculum planners are likely to come up with identical goal statements.