The biological role of zinc in the pancreas, prostate and in submandibular glands and influence of its complex salts with chelators on the state of glands tissue

The article provides data on the biological role of zinc in humans and animals. The main part of zinc is concentrated in three glands: Pancreas, prostate, and submandibular glands. The authors provide data on the role of zinc value and its role in each of the described glands. For the first time, zinc in the prostate and submandibular gland has been shown to interact with chelating substances, forming intra-complex salts that are well detected using histochemical methods. Analyzing data on the effect of chelators on the tissue of the prostate and submandibular glands, the authors provide data indicating that they are capable of having a damaging effect on them, causing the development of various histological changes, which serves as an indication that the damaging effect of zinc-binding complexing agents is not specific to pancreatic B cells alone; on which they have a direct damaging effect, causing their necrosis and destruction. This is also evidenced by the presented data, according to which zinc-binding chelators in the endocrine tissue of the pancreas itself have a damaging effect not only on B cells, but also on endothelial cells of blood capillaries, which is accompanied by impaired microcirculation in pancreatic islets. We provide evidence that zinc- binding substances, in particular 8-oxyquinoline derivatives, are included in some antimicrobial drugs, which need to be noted.

In the human body, the total amount of zinc content is 2–3 g. The largest amount is detected in the pancreas and prostate glands. More than 80 years ago, Scott A. and Fischer D. informed that insulin in pancreas is located in the form of a zinc-insulin complex, suggesting that zinc ions determine the physiological activity of insulin [1]. Apart from humans, a large amount of zinc is revealed in the pancreas in many birds, dogs, rabbits, mice, horses, and some species of fish, hamsters, cats, and amphibians [2–5]. Okamoto K. for the first time said that zinc in the pancreas is concentrated in B-cells producing insulin [6, 7]. According to modern opinions, zinc takes part in the processes of formation of insulin storage complex in B-cells [8]. Storage form of insulin is important in the regulation of carbohydrate metabolism, in particular, in maintaining glucose homeostasis, ensuring the relative level of its blood. The high level of blood glucose via glucose receptors stimulates dissociation of zinc-insulin complex and release of insulin in blood. There is a proportional relationship between the zinc content in B-cells and the amount of insulin in cytoplasm. Decrease in the amount of insulin in B-cells is accompanied by a decrease in amount of zinc [9, 10]. Zinc at an earlier stage of insulin synthesis in B-cells takes part in two important processes: Process of the formation of insulin hexamer and process of crystallization of insulin in B cells [11].

The content of zinc in B-cells is significantly reduced in animals with experimental diabetes, regardless of what caused it [12–17]. Using the electron histochemistry method, Okamoto K. and Kawanishi H. confirmed that in B-cells zinc ions are localized in B-granules, the contents of which are the deposited form of insulin [18, 19], in particular, in the central part of the granules, on the periphery and partially in the shell in granules [20].

Zinc ions contained in cytoplasm B-cells have a coordination number equal to 4 and 6 and are able to engage in interaction with a number of substances with the ability to form with them not conventional salts based on valence bonds, but form complex salts (chelates), in which the zinc atom is firmly fixed between several adjacent atoms, forming chelate compounds by more durable covalent hybrid bonds [21], capable of causing destruction

and cell death to a short period of time [22, 23]. Zinc atoms are fixed between nitrogen, sulfur, or oxygen atoms. According to the ability of complexation, zinc significantly exceeds the metals of the main group.

The largest amounts of zinc in the body are contained in B-cells of the pancreas and prostate glands.

Rubbo S. and Albert A. [24] found that the toxic effect of oxyquinoline is associated with its ability to form in the cell toxic chelate complex with metals, which was subsequently repeatedly confirmed. They showed that the presence of this complex in the cytoplasm of B-cells for a short time is accompanied by their damage. In experiments using various isomers of azaoxyquinoline (azainer) — 8-oxyhyquinoline derivative — the isomers forming chelates 1:1 possess the greatest toxicity with metal to have logarithm of 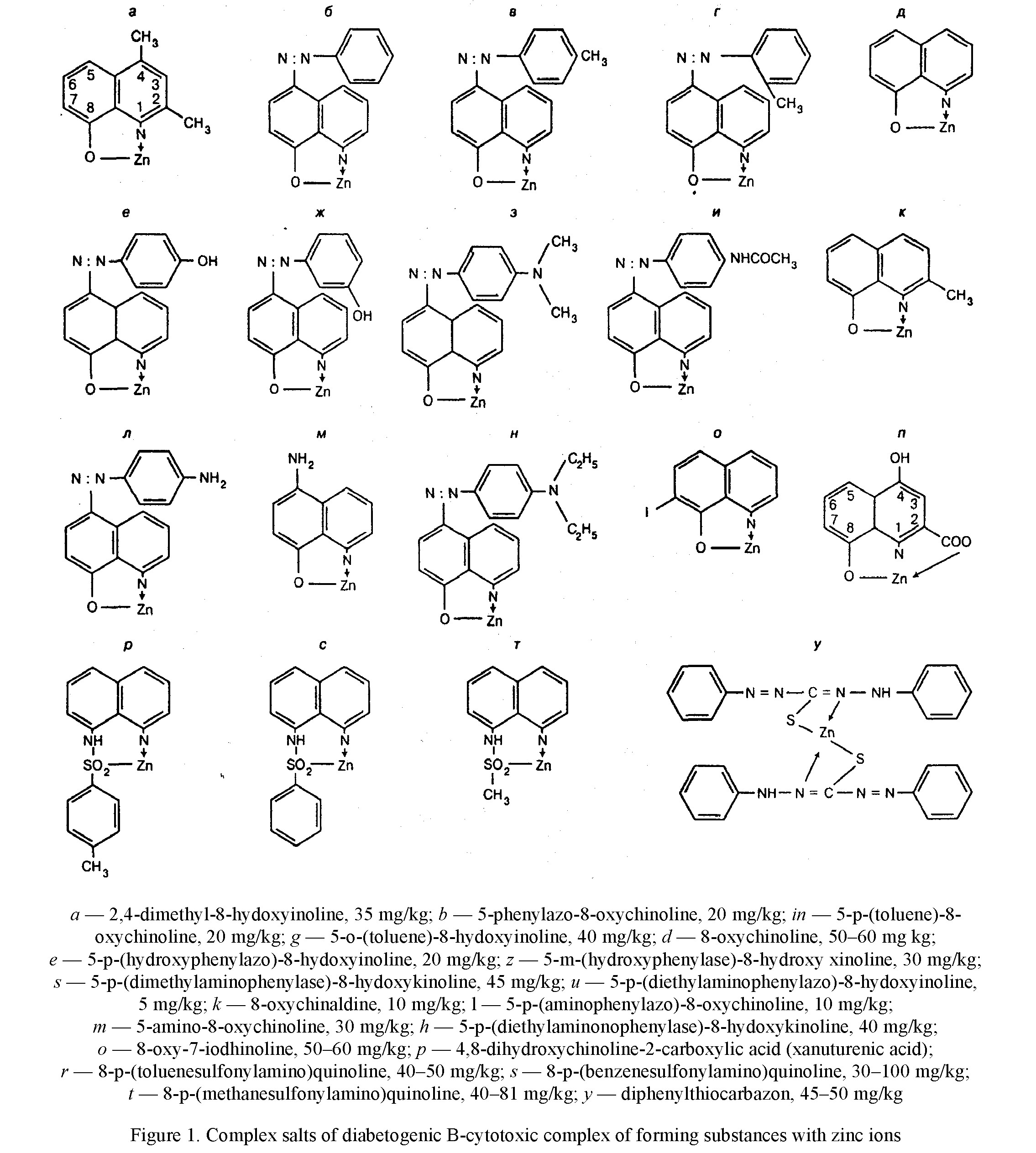 resistance constants, equal to 7.6 and higher, to 9.4, while the toxicity of complexes of other isomers of azaoxine with a smaller value of the resistance constant of 5.8–6.7, significantly lower [21]. It is also shown that having high toxic complexes of 8-hydroxyquinoline derivatives with zinc ions have a high stability constant, equal to 8.5. Later Weitzel G. et al. [25] experimentally confirmed that the complex of composition 1:1 contains 1 molecule of 8-oxychinoline and one zinc atom is the most toxic for cells (Table 1). Formation of complexes 2: 1 constant indicator of stability of the latter depends in addition on the degree of affinity of the chelator to the metal, further from the two characteristics of the chelators and metal. The presence of additional radicals in the para-positions of the complex of the chelator, especially in areas close to those that interact with the metal ion, contributes to the occurrence of the steric effect, as a result of which the two of its molecules cannot get together so much that it became possible to fixation metal in a stable ring. If the latter cation has a small diameter, then the ring is not able to form at all. The zinc atom has a radius value of 0.74 nm and occupies the median position between beryllium (0.31 nm) and rubidium (1.49 nm), the same as a nickel (0.72 nm) and cobalt (0.74 nm) [4]. The high strength of the zinc-dithizone complex of the composition 2:1 is due to the spatial extension of the dithizone molecule and the arrangement of two phenol rings at the ends of the molecule, which does not interfere with the sulfur and nitrogen atoms located in the center of the dithizone molecule, close to the zinc atom.

In addition, the zinc atom is adjusted between two nitrogen and sulfur atoms with respect, to which the zinc affinity is high and somewhat exceeds the affinity of the ions of this metal to oxygen. Finally, two dithizone molecules are involved in the interface, having a total large number of double bonds. As for complexes of composition 1: 1 with 8-hydroxyhyxicinoline derivatives, their strength is due to both a large number of double bonds in the molecule of the complex agent and the formation of a four-membered ring (Fig. 1). In addition, the sulfur atom participates in the conjugation of 8-shealfonylaminohynolines. The additional strength of the zinc-xanthurenic acid complex gives the conclusion of a zinc atom between two oxygen atoms.

The prostate gland total contains the largest amount of zinc. In the prostate fluid, its number reaches 590 μg/g. In the peripheral zone of the gland, its content is 2.5–3 times higher than in the central [26] reaching 290 μg /g. Zinc is an inhibitor of 5-α-reductase — an enzyme converting testosterone into the more active hormone dihydrotestosterone, which contributes to the growth of the prostate (Fig 2). The physiological role of zinc contained in the liquid of the prostate gland is to implement the mechanisms of disagreement between the head and the tail of the spermatozoa. The indicator of the functional state of the prostate gland is the content in its secretion of citric acid and zinc ions [27]. Zinc affects the activity of sex hormones, the production of spermatozoa, the development of male genital glands and secondary sexual signs. Citric acid formed in the prostate gland contributes to sperm soluble, the activation of hyaluronidase, and the latter contributes to the penetration of sperm in the egg. Zinc is a specific inhibitor of the mitochondrial aconitase of prostate epithelium, which is accompanied by an increase in citrate concentration due to the inhibition of its oxidation in mitochondria [28].

The influence of a zinc-chelate complex forming in the cells of the cellular structures.

The direct effect on the B-cells of the pancreas of chelate active chemicals possess a high affinity to zinc and is accompanied by the formation of a zinc-chelator complex (Fig. 2.1; 2.2), which causes damage and destruction of 80–90 % of cell-matrix of B-cells 15–30 min after injection of chelator (Fig. 1.5; 1.6).

It has been established that since zinc in B-cells is concentrated in B-granules, where in storage form of insulin is formed and accumulated, the destruction of cells begins with damage and destruction of B-pellets after 5 minutes after the formation of the complex.

The investigation of histotopography of zinc in B-cells made it possible to establish that its maximum amount in the form of a zinc insulin complex is observed around inside islet blood capillaries (Fig. 2.3; 2.4).

Is the destructive influence of the chelator strictly specific effect on the influence of B-cells? As it was later shown, the places dense adjacent to the zinc-chelator complex to the walls of the capillaries develop damage to the endothelium in combination with the development of circulatory microcirculation disorders [29]. Developing changes in the endothelium of capillaries is an indication and indicate, thus, in favor of the non-specificity of the damaging effect of the chelator. It should be noted that these changes are developing during the first few days after the impact of the chelator and cannot be attributed to the number of late vascular complications observed in diabetes.

Histological investigation of tissue of submandibular glands as of prostate, also containing zinc, deeper changes were revealed: hyperemia, accompanied by stasis and lysis of leukocytes in blood, fibrinoid changes with signs of destruction of the walls of arterioles, plasma impregnation, destruction and necrosis of and epithelial cells of ductus, dystrophy of Intra ductus tissue, vacuolization and pycnosis of cell nuclei [30]. The question arises: whether these changes are the result of a direct damaging effect of the zinc-chelate complex [1], or do they relate to the number of late complications of diabetes [2] not directly related to the direct influence of the chelate? The minimum time required for the development of histological changes in islet tissue after exposure to the substances under study is 3–4 days, while the late vascular complications in animal experiments, in particular on rabbits, are detected only in a few weeks (a person is usually in a few years). The above-described changes were detected [30] in animals after 6 days after the effects of the chelate. This gives grounds to believe that these changes are due to the direct toxic effect of the zinc-chelate complex. In turn, the response to another question depends on the final answer to this question: whether the damaging effect of the zinc-chelate complex is specific to only B-cells of the pancreas, or it is nonspecific and capable of providing a damaging effect on other tissue cells containing zinc. 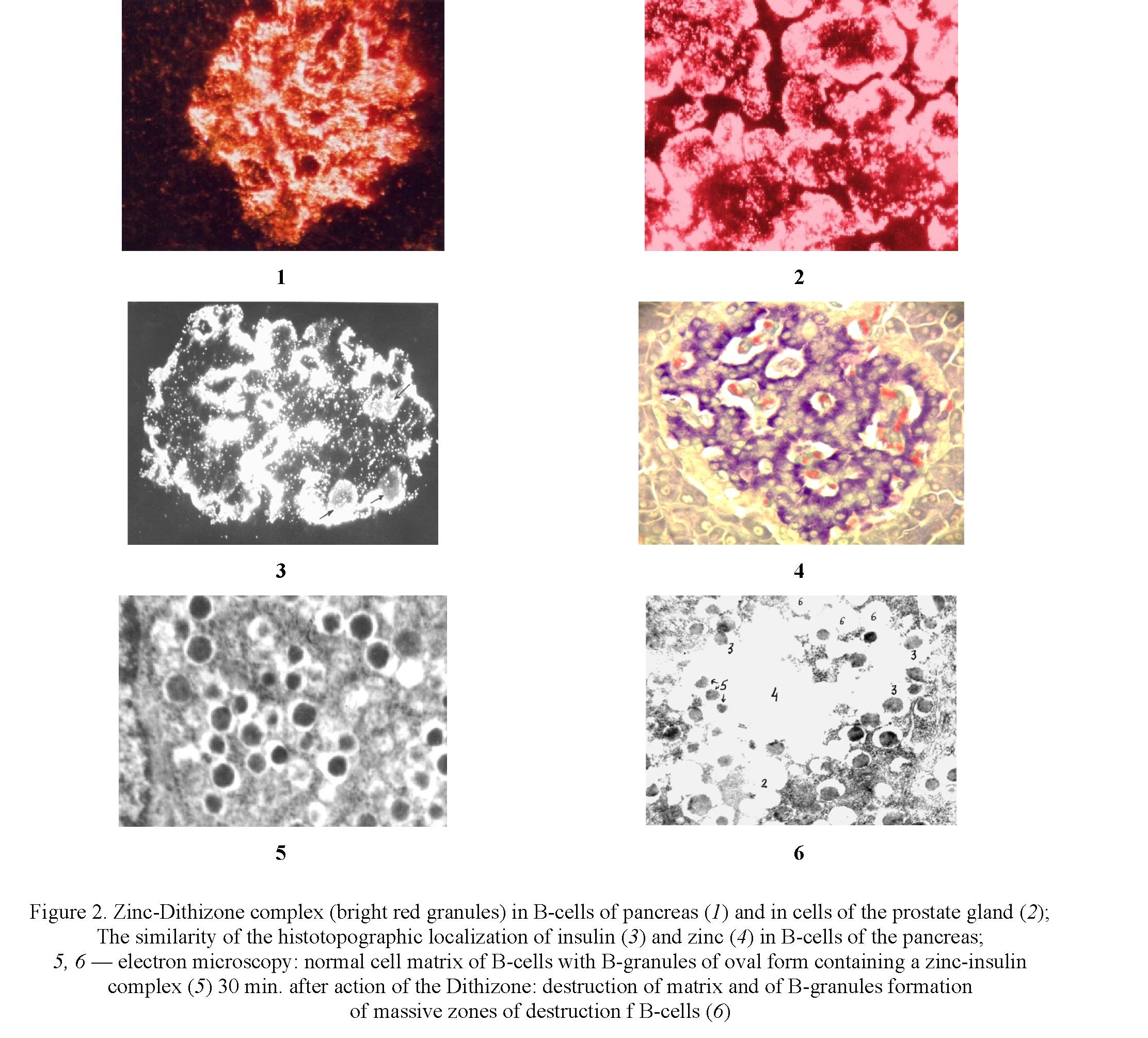 Currently, about 20 complexes of forming chelators are capable of forming toxic complexes, causing destruction and cell death, with zinc. First of all, it is the glands containing zinc, in particular, endocrine pancreatic cells. These include 16 oxyquinoline derivatives (arylaz derivatives, arensulfonylaminoquinolines, diphenylthiocarbazon). Oxyquinoline derivatives are included as the main component in a range of antibacterial action drugs intended for the treatment of skin diseases. The antibiotic tetracycline hydrochloride possesses a high affinity to zinc and high doses accompanied by hyperplasia and in-cell damage. Similar properties have the drug enteroseptol, intended for the treatment of intestinal diseases. Now the contact of a person with various chemical compounds in everyday life has increased significantly. Among them, it is impossible to eliminate the presence of chelators having a high affinity to zinc and having high stability constant of the logarithm. 18 of them due to the chelating of zinc in cells cause their death. It is necessary to keep attention to chemical compounds of this group as potentially capable of rendering an adverse effect on the endocrine pancreatic tissue and on the prostate gland.