Investigation of tritium assimilation by sunflower crop at uptake through root

This study presents a quantitative assessment of tritium assimilation by sunflower (Helianthus annuus L.) crop at HTO uptake by root in vitro. It is found that at chronic uptake of tritium radionuclide as tritiated water (HTO) by sunflower through root system mean value of OBT/TFWT ratio during vegetation was 0.21. The conversation rate of tissue free water tritium (TFWT) to organic matter as organically bound tritium (OBT) varied from 0.08 to 0.044 % h–1, with a maximum in the leafage phase. Translocation index (TLI) for sunflower crop at root uptake of tritium was 65 %. The distribution nature of tritium in sunflower parts at lasting root uptake of tritium for tissue free water tritium and organically bound tritium decreases in the next rows consequently: “roots>inflorescences>stems>leaves” and “inflorescences>stems>leaves>roots”. At root uptake of tritium by sunflower as HTO form values of TFWT activity closely correlate with the activity of the isotope in water using for plant irrigation (r = 0.89). Established regularities of tritium assimilation and distribution in sunflower parts and OBT/TFWT ratio are of practical importance to biomonitoring of environmental contamination with tritium at impact territories of nuclear fuel cycle enterprises.

Tritium is produced during the operation of nuclear reactors of all types [1]. Currently, there are no efficient ways of capturing tritium, therefore the radionuclide together with discharges and releases from nuclear fuel cycle enterprises enters aquatic and terrestrial ecosystems and thus food chains, in which man can be the end link. The main depot of naturally occurring tritium isotope is water; therefore tritium together with a water flow and water vapors from places of primary contamination easily travels long distances [2–4].

A significant stage of tritium transfer is plants that are able to absorb man-made tritium incorporated in water through roots [5]. Next, as a result of identical chemical properties of ordinary water molecule (Н2О) and tritiated water (НТО), tritium is readily involved in photosynthesis processes, which result in its transfer to organically bound tritium (OBT) [6, 7]. Organically bound form of tritium is capable of being retained in cell structures for a long time, and its dose coefficients are roughly three times as high as tritiated water (НТО) ones [5, 8]. In this context, the study of problems of radiological and hygienic hazard of man-made tritium from the perspective of its uptake, distribution and incorporation in crop products, is a relevant task for developing strategic measures and predicting radioecological consequences in case of radiation accidents. However, risk assessment in case of contamination with tritium has remained a challenge up to now with many unknown quantities. Reasons are insufficiency, inconsistency of most in vitro and in vivo quantitative data describing processes of uptake, distribution and incorporation of man-made tritium. The paper is aimed at a quantitative assessment of the process of root uptake of НТО by plants in vitro the case of sunflower crop.

Sunflower (Helianthus annuus L.) was chosen as an experimental plant because it is actively cultivated in the Republic of Kazakhstan as an oil crop. Research into quantitative indices of incorporation of tritium at HTO root uptake by plants was undertaken in vitro.

Drainage system, then background light-chestnut loamy soil, in which sunflower was germinated in vitro, were placed in plastic vegetation vessels (V–35 l). A total of 10 vessels were prepared. Seeds similar in size and weight were used for the experiment. 3 plants at most were cultivated in the same vessel. For tritium root uptake simulation, plants were watered with water with HTO high activity concentration for the duration of vegetation. Water with a high activity concentration of tritium was sampled in the territory of Semipalatinsk Test Site every 10 days to simulate natural dynamics of НТО in the soil solution of vegetation vessels. Experimental plants were watered with a regular portion of tritiated water 3 to 5 times for 10 days. In morning hours — with water at a pre-calculated rate maintaining optimal moisture of soil at the level of 60 % of the total moisture capacity [9].

Rather similar growth conditions of experimental plants were ensured by a phyto-lighting and thermoregulation system. The ventilation system in the laboratory premises was employed to exclude aerial uptake of tritium during the experiment owing to evaporation of НТО by soil after watering and transpiration activity of plants. The activity concentration of tritium in water and in plant samples was controlled simultaneously every 10 days.

The experiment lasted as long as the growth phase of sunflower seeds (when ripening begins) was 65 days. During the entire experiment, sampling of sunflower leaves was randomized every 10 days in three replications. At the end of the vegetation period, at the ripening stage, sunflower parts were additionally sampled (stems, leaves, inflorescences, roots) to establish the nature of tritium distribution in tissue-free water (TFWT — tissue-free water tritium) and in the organic matter (OBT — organically bound tritium). The weight of each plant sample averaged 100 to 150 g.

The activity concentration of tritium was measured in tissue-free water and the organic matter of plants. Free water from plants was separated through a special facility [10]. The facility represents a pressurized transparent vessel for feeding plant samples, connected with a cool metal surface and a receiver to collect condensate extracted from a sample. A 10–15 ml condensate collected was prepared for β-spectrometric measurement of the activity concentration of tritium with a liquid scintillation spectrometer.

The activity concentration of tritium in test samples was determined by liquid scintillation spectrometry using a “QUANTULUS 1220” spectrometer (Perkin Elmer, USA) [11]. Just before the analysis, all samplesе passed through ha filtration stage to remove mechanical impurities. Then a 3 ml aliquot was collected from a measured sample and placed in a 20 ml plastic vial adding a scintillation cocktail in the ratio of 1 to 4. A scintillation cocktail Ultima Gold LLT specifically developed for measuring tritium in natural samples (tritium registration efficiency was in the order of 60 % ranging from 0 to 18 keV) was used to analyze samples. The measurement time of each sample was about 120 minutes. A beta-spectrum was processed, and tritium activity concentration was calculated with “Quanta Smart” software. The minimum detectable activity of tritium for the radiometric instrumentation used ranged as follows: for OBT — 4.5 to 7, for НТО — 2.7 to 5 Bq kg-1.

During the experiment with sunflower crop, climatic changes affecting biological productivity of plants were measured (temperature and relative humidity). Air temperature varied from 23 to 32 °С, relative air humidity — 35 to 55 % and as a whole corresponded to normal growth conditions of sunflower. The duration of the experiment was 65 days before ripening began.

Values of the activity concentration of tritium in water (for watering) during the experiment varied from 95 to 540 kBq kg-1 (Fig. 1). As a whole, the variation range was 1 order of magnitude. Thus, natural dynamics of НТО was simulated in vitro. 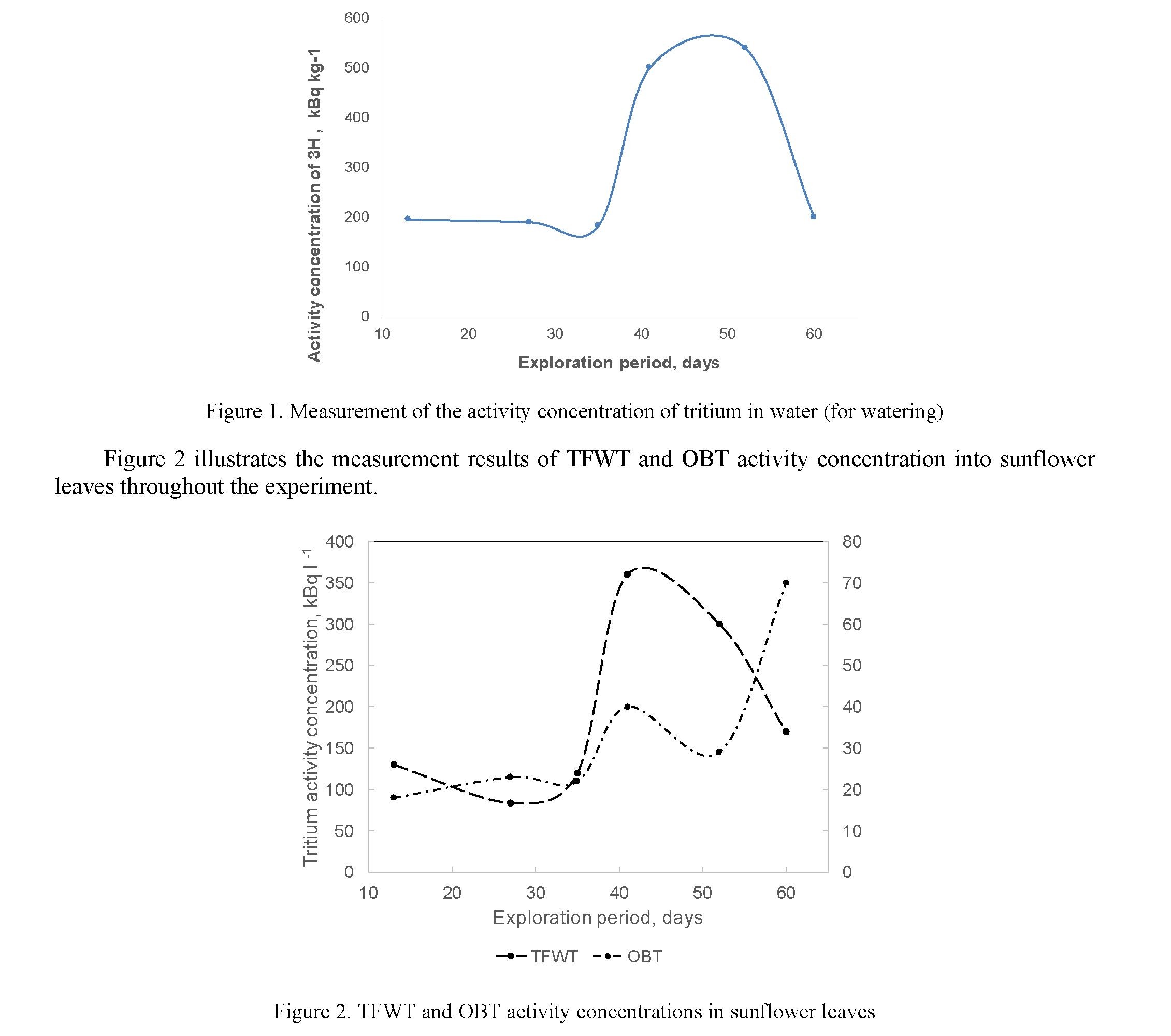 According to provided data, values of OBT activity concentration (n·104) are one order of magnitude lower compared to TFWT values (n·105) for sunflower leaves during vegetation.

Based on derived quantitative parameters of TFWT and OBT, the conversation rate of TFWT to OBT in sunflower leaves was estimated (Fig. 3). During vegetation, rate values were varying between 0.080 and 0.044 % h–1. The maximum rate at which OBT is produced was found in the active growth phase of sunflower, and at the end of vegetation (stage of seeds growth), the index of the rate at which OBT is produced decreased almost twice. A similar regularity was found when studying quantitative parameters of aerial uptake of tritium in vivo [16]. High rate of OBT formation at the early stages of plant development is attributed to intensive biosynthesis and consequently photosynthesis [5, 17]. A drop in the rate of tritium incorporation into organic structures of plants at the end of vegetation was probably caused by ageing of laminae and, accordingly, green plastids in which photosynthesis occurs [17].

The mean OBT/TFWT ratio over the vegetation period for sunflower was 0.21.

Figure 5 provides the nature of tritium distribution in parts of sunflower at root uptake at the end of the vegetation period. 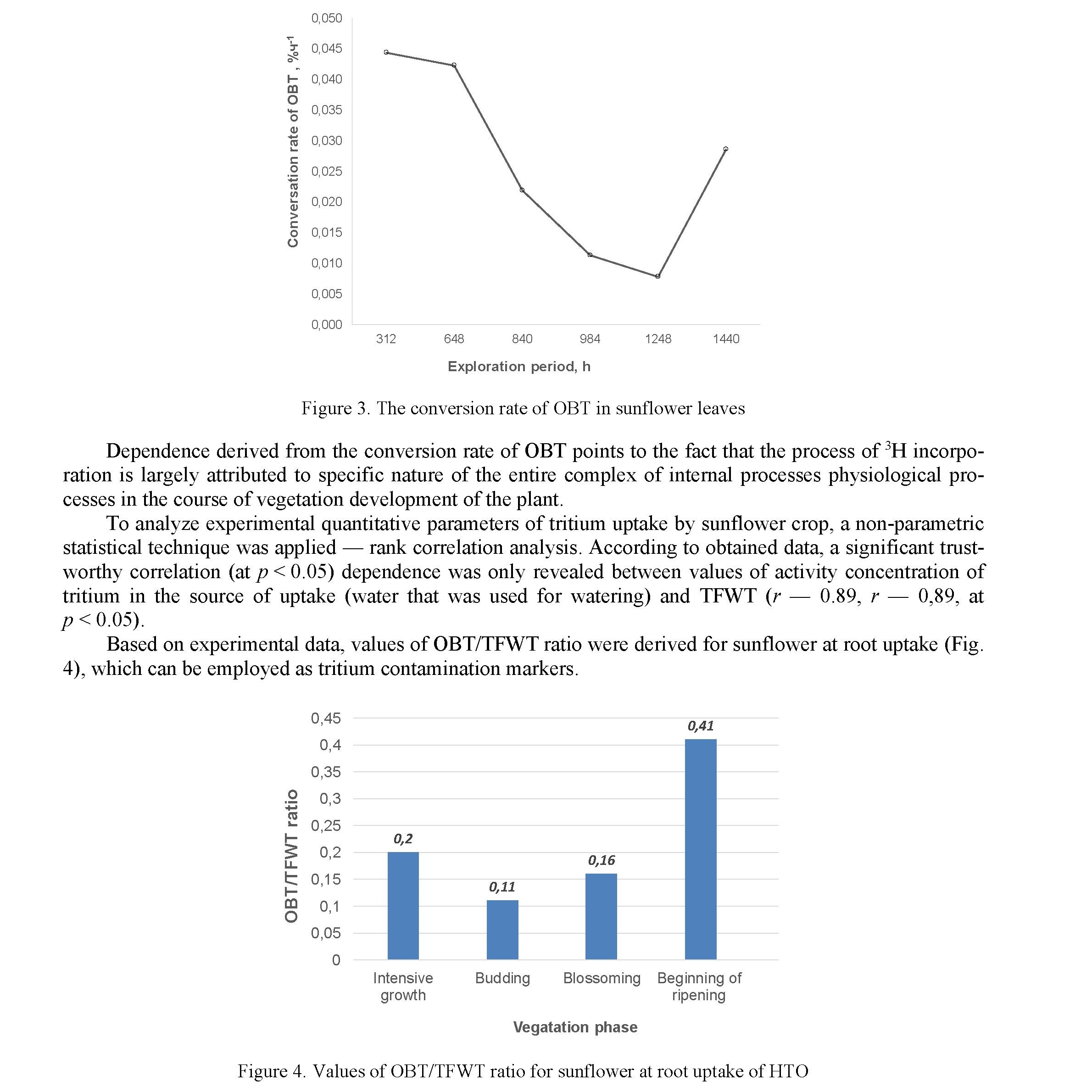 As seen from Figure 4, at root uptake of tritium the distribution of TFWT and OBT in parts of sunflower is different. For example, the TFWT activity decreases in the series “roots>inflorescences>stems>leaves”, and that of OBT — in “inflorescences>stems>leaves>roots”. According to earlier studies [16], at aerial НТО uptake, tritium distribution is opposite, and maximum activity concentrations of TFWT and OBT are observed in aboveground plant parts. This fact indicates that tritium distribution in the plant is affected by radionuclide pathway.

The translocation index at root uptake of tritium was 65 %, which is almost 2 times higher than a similar value at aerial uptake of the radionuclide [16].

Experimental quantitative parameters of uptake and incorporation of tritium in the case of sunflower crop demonstrated that the TFWT activity depends on the activity level of tritium in the source whereas that of OBT is a quantity being dependent on plant vegetative growth.

Practical utility of research findings is that regularities established for tritium distribution in parts of sunflower and OBT/TFWT ratio values can be used in biomonitoring of contamination with tritium, in particular, to reveal the source of entry of this radionuclide into the environment. Values of translocation index derived for OBT to the yield can be used in assessing radiation exposure of the population living in nuclear facility impacted areas.

This research was funded by the Ministry of Education and Science of the Republic of Kazakhstan (Grant No. АР08956713 “Research into radiation-hygienic hazard by man-made tritium when accumulated by crop products for assessing radiation exposure of the population”).