Phytocenotic features of species of the genus Salsola L. (Chenopodiaceae Vent. / Amaranthaceae Juss.) in the desert part of the Syrdarya river valley

In desert regions, people's lives are usually confined to rivers as water sources. The anthropogenic impact on the territory of the Syrdarya river valley is characterized by the historical duration and the greatest intensity. In addition, floodplain landscapes are characterized by a number of features that must be taken into account when intensifying their economic use. They are dynamic, easily vulnerable, subject to destruction by water, wind, various modes of transport, intensive grazing of farm animals, etc. [1].

Ecological and biological features, seasonal and multi-annual dynamics, structure and productivity of individual plant communities of the Syrdarya river valley were studied by different researchers, among them N.P. Ogar [2] and O.M. Demina [3]. In the works of above-mentioned researchers, there is information about the seasonal development of dominant plants, their yield and biological productivity of aboveground and underground phytomass, depending on the regime of surface flooding, the level of groundwater occurrence and soil salinity.

Since the mid-90s, N.P. Ogar has been studying the dynamics of the spatial structure of the vegetation of the Syrdarya river delta [2, 4]. The sphere of her interest was studies on the structure of vegetation cover depending on the age of floodplain terraces. The author showed that all the main types of vegetation are primary: shrubby and tree-shrubby “tugai”, meadows and grass swamps, but their floral composition and areal distribution are unequal in segments of different ages [2]. On the basis of a comprehensive analysis of the relationship between vegetation and ecological conditions, N.P. Ogar compiled generalized ecological and dynamic vegetation series that characterize the sub-zonal segments of the floodplain of the Syrdarya river [4]. They are the basis of legends for vegetation maps of different scales.

The description of the tree and shrub vegetation of the Syrdaryariver is in the work of S.A. Nikitin [5]. The scientist mentions the distribution of oleaster tugai in the Terenozek region and flood willows in the Syrdarya river delta. In the course of the studies of A.B. Baibulov, these communities were not noted [6].

In 2005–2008, detailed work was carried out to study the biodiversity of wetlands in all lake systems of the Syrdarya delta under the leadership of N.P. Ogar, with the participation of A.B. Baibulov. Studies of the vegetation cover of the Aral Sea coast were carried out by l.a. Demicheva et al. (2004–2006) [7–10].

The study of species of the genus Salsola L. in the Kyzylorda region has both theoretical and practical significance. Thus, knowledge of the peculiarities of the structure of phytocenoses in this region will allow us to develop recommendations for optimal nature management that do not cause considerable damage to plant resources and take into account measures to radically improve the pastures of this territory.

The vegetation cover of the desert part of the Syrdarya river valley is degraded for a variety of reasons, especially due to anthropogenic activities (grazing, agriculture, various construction works, road digression, and much more).

Pastures located near settlements, cattle tracks in the floodplain of the river, as well as the territory where road construction works are carried out are subject to significant violations. In the composition of the vegetation cover of these territories, various phytocenoses are observed, including communities with the participation (dominance) of species of the genus Salsola. The main consequence of the violation of these and any other phytocenoses is a decrease in their species diversity (due to the loss of the most vulnerable, as well as forage plants and their replacement with weeds, including poisonous species).

Objects and methods of research

The objects of the study were species of the genus Salsola L. (Chenopodiaceae Vent., or Amaranthaceae Juss.) and phytocenoses formed with the participation of these species in the desert part of the Syrdarya river valley.

Classical botanical (route–reconnaissance; ecological–systematic; ecological–geographical) methods were used in the research process. During the work, the herbarium material of the collection funds of the Institute of Botany and Phytointroduction (AA) was studied. Fundamental floristic and the latest modern works were used to identify the collected material during the expedition. Vegetation was studied using traditional methods of field geobotanical research and the works [11–24].

For each species of the genus Salsola, its participation in complex plant messages of varying degrees of disturbance is printed, assessed on a three-point scale (weakly, medium, severely disturbed) [24]. Representatives of the genus Salsola, in the features of annual species, are considered pioneers of overgrowth of disturbed arid territories. Poorly disturbed areas are when a particular community is dominated by shrubs, semi-shrubs, shrubs or semi-shrubs with perennials, that form a more or less stable community. As we understand it, there are practical networks of undisturbed territories in the Syrdarya river valley (due to Scott grazing). The average disturbed areas are dominated by the above-mentioned life forms, but at the same time subdomination or simply an abundance of annual sinanthropic widows in this community (ephemera are not considered). Heavily disturbed areas are a community with absolute dominance of annual Salsola species (for the study of the territory).

The description of phytocens and the collection of materials was carried out during the expedition research in the Syrdarya River valley (2018–2019) as part of the release of the grant project “Monitoring studies of the restoration of valuable vegetation in abandoned rice fields of the Kyzylorda region, prospects for their use” (2018–2020), and is also used by data on the past grant project “Monitoring of the vegetation composition of livestock runs — a scientific approach to the sustainable use of desert pastures of Kazakhstan (on the example of the Kyzylorda region)” (2015–2017).

During the expedition work in the desert part of the Syrdarya river valley, 24 plant communities were described with the participation or dominance of species of the genus Salsola. Communities differed from each other in the composition of species, which is due to the diversity of environmental factors: physical and geographical (terrain elements, soil, moisture, salinization, etc.) and anthropogenic (disturbed areas due to grazing, construction and repair work, unregulated traffic, etc.) (Fig. 1).

The described communities can be divided into two groups: 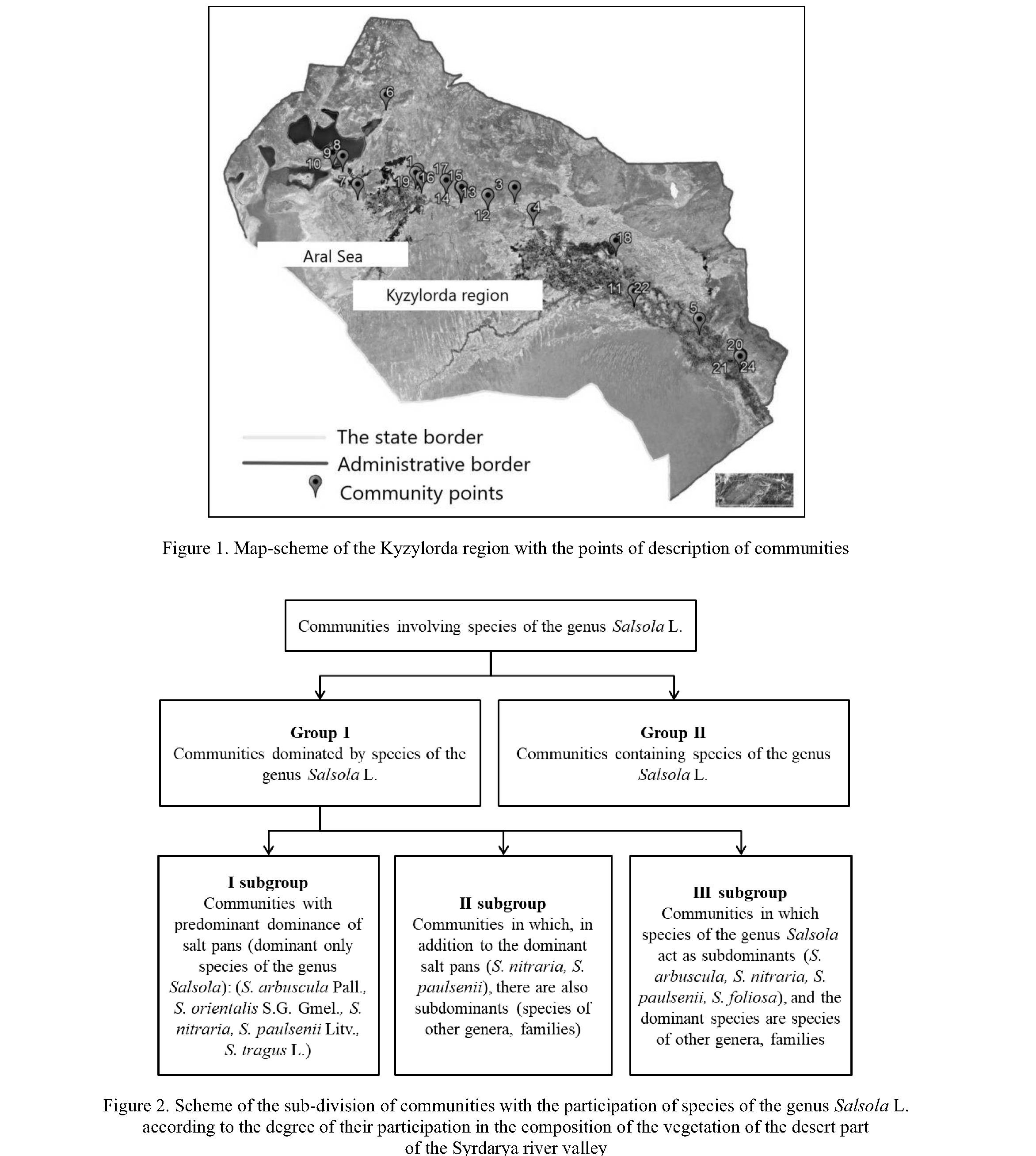 We have observed a Tragusi Salsoletum community dominated by S. tragus (sp) in the clay desert, not only in the valley of the Syrdarya River but also in the eastern Aral Sea region (in the area separating the Small and Large Aral Sea, on the dried-up bottom of the sea). GPS coordinates N 46°6.930'; E 60°46.280'; height 27 m above sea level. Habitat: heavily disturbed areas. TPC was 15 %. There were 8 species in the community. In this community, S. nitraria (sp) was found, which, like Alhagi pseudalhagi, participated in the addition of the community.

The listed Annual Salsoletum communities served as an example of successions that occur as a result of water withdrawal from a given territory. The species S. nitraria, S. paulsenii, and especially S. tragus were very characteristic of such habitats. In the absence of competition, these species quickly master this territory.

According to our observations, another clear example of succession was a community with the participation of S. nitraria (sp) and S. paulsenii (sp.), on a fixed sandy desert. GPS coordinates N 46°4.049'; E 60°56.860'; height 35 m above sea level. Habitat: along roads in the Kyzylorda region, from medium to severely disturbed areas. TPC was 30 %. There were 6 species in the community. S. nitraria and S. paulsenii are adapted to disturbed places and grow well on the slopes of roads where rainwater flows. They formed small-species annuals of the Salsoletum community.

We included the Annual Salsoletum convolvulosum community in the subgroup of the joint dominance of S. nitraria (cop 1) and S. paulsenii (cop1). This community is located on a fixed sandy desert. GPS coordinates N 45°44'57.8''; E 62°52'53.8"; height 67 m above sea level. The habitat was also heavily disturbed lands. There were 15 species in the community.

Among the studied species of the genus Salsola, all of the above communities included: S. nitraria, S. paulsenii and S. tragus, while S. nitraria scarce is presented. All communities in which these three species were noted, but they did not dominate, are found on weakly or less frequently on medium disturbed lands (near roads, settlements and pastures).

In undisturbed communities, these species occupied the sub-ordinate role, not dominated. However, in places of violation of the soil and vegetation cover, annual pickles dominated as pioneers of overgrowth of disturbed lands. And for several years they prevailed over perennial species. As vegetation recovers, annual species moved to a sub-ordinate position.

The annual species of the genus Salsola: S. nitraria, S. paulsenii, and S. tragus are well-adapted to the habitat conditions in the studied area. In undisturbed and almost undisturbed phytocenoses. These species, as a rule, are not dominant or subdominant. So, on undisturbed lands, they occur only once or several dozen, depending on the characteristics of the habitat. Meanwhile, in disturbed areas, these annuals can form temporary communities in which they act as dominants. Of all the presented annual salt pans, S. nitraria is characteristic and dominates on strongly, medium and slightly disturbed lands. Two other species of annual salt pans (S. paulsenii and S. tragus) act as dominants only occasionally in severely disturbed territories, but they feel good on medium disturbed lands. It should also be added that the shrub species S. arbuscula and S. orientalis, depending on the growing area, can occur and even dominate in weakly and moderately disturbed lands. Annual species of salt pans are oligotrophic plants, which allows them, unlike other species, to grow in disturbed areas poor in organic compounds. Dying, they enrich the soil with organic matter necessary for perennial species, thereby contributing to the restoration of vegetation. Consequently, annual species of the genus Salsola (S. nitraria, S. paulsenii and S. tragus) are promising in terms of their use in reclamation works in the desert zone.

The research was conducted according with grant project: AR09258929 “Prospects for using the correlation between the composition of the anthropophilic element of the flora of the desert part of the Syrdarya River valley and the type of land disturbance for forecast purposes” (2021–2023).